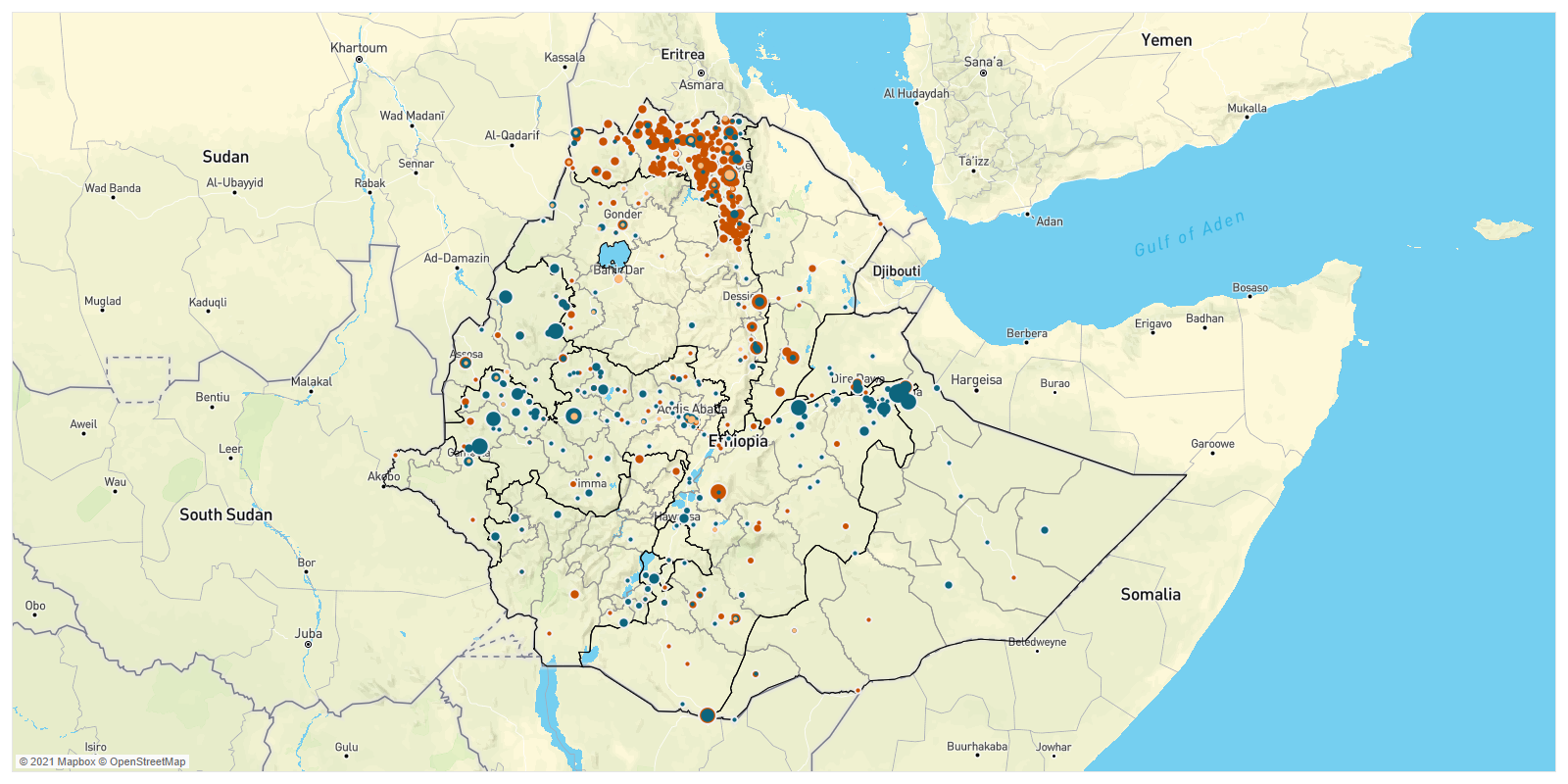 By the Numbers: Ethiopia, 12-18 June 20212Some events from this coverage period might be included in the data in subsequent weeks due to reporting delays. 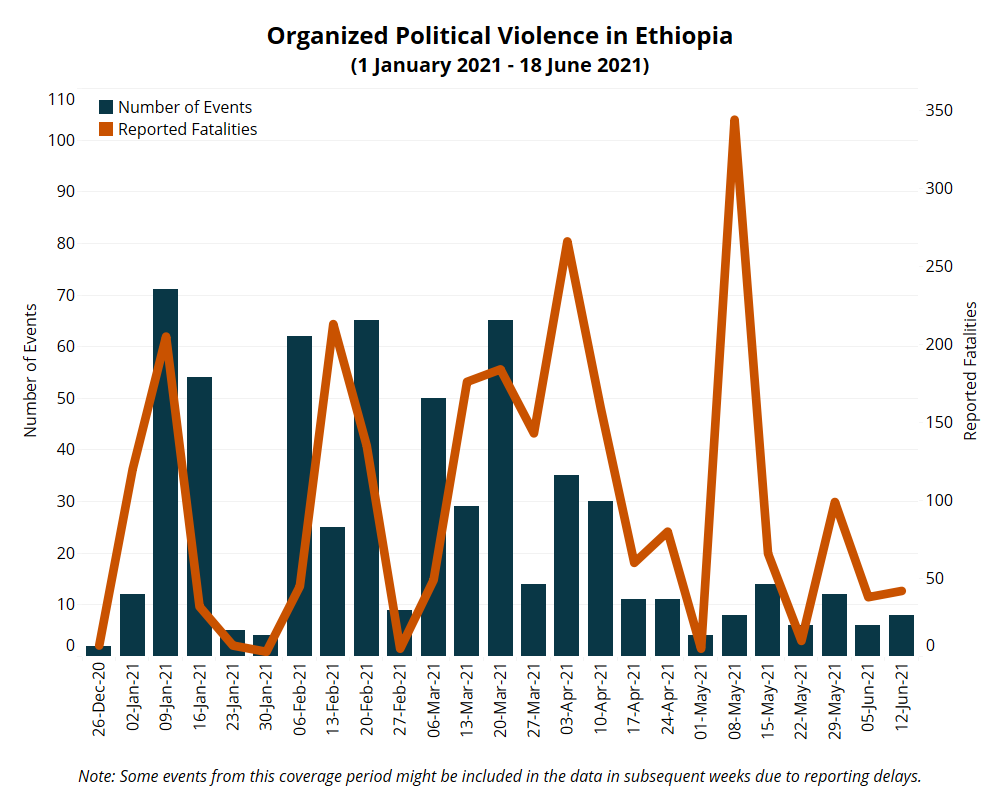 Armed clashes continued throughout last week between Oromia regional state security forces and Oromo Liberation Front (OLF)-Shane militants. Conflict in western and southern Oromia has intensified since the designation of OLF-Shane as a “terrorist group” by the Ethiopia House of People’s Representatives on 1 May 2021. Major clashes have occurred across Western Wollega, Kellem Wollega, Horo Guduru, Guji, and West Guji zones (Office of the Prime Minister, 1 May 2021). As claimed by the Oromia Police Commission on 18 June 2021, 295 members of OLF-Shane, including a top leader of the group, have been killed in western Oromia over the past two months (Oromia Police Commission, 18 June 2021).

Government forces continue to kill civilians who are accused of supporting or being members of OLF-Shane. On 14 June 2021, Oromo regional special police shot and killed a civilian in Shambu town in Horo Guduru Wollega zone in the Oromia region (Oromia Media Network, 17 June 2021). A week before this incident, on 6 June 2021, a young man was shot and killed by Ethiopian military forces in Lalo Asabi kebele in Gimbi town in West Wollega zone (Oromia Media Network, 10 June 2021).

Last week, clashes continued between Oromo and Somali ethnic militias in areas near Tulu Guled (East Hararge, Oromia), displacing 580 families and resulting in an unspecified number of fatalities (see map below; DW Amharic, 14 June 2021). Armed conflict re-ignited in the area on 8 June 2021 (see EPO Weekly: 5-11 June 2021). The Tulu Guled area is highly contested and often sees a violent conflict between the Oromo and Somali clans who both claim the territory.

In the Tigray region, two more peaceful protests against the Tigray People’s Liberation Front (TPLF) and foreign intervention in Ethiopia’s internal issues were held in Wef Argif and Dansha towns in the Western Tigray zone on 12 and 13 June 2021, respectively (see map below; Amhara Media Corporation, 12 June 2021; Amhara Media Corporation, 13 June 2021). Thus, from 9 to 13 June 2021, a total of five peaceful protests against TPLF and foreign intervention in Ethiopia’s internal issues were held in the Western Tigray zone (see EPO Weekly: 5-11 June 2021). Since the takeover of Western Tigray by Amhara regional forces, 270 ethnic Amhara who were forced to leave the Western Tigray zone during the TPLF administration in the 1990s have returned to Humera city from Sudan where they had been living as refugees (Amhara Media Corporation, 15 June 2021). The forceful takeover of Western Tigray is an issue that has yet to be resolved legally, and its administration will be a key issue of debate for Ethiopia’s newly elected government. Voting will not occur in any zones of the Tigray region during this election due to ongoing violence. 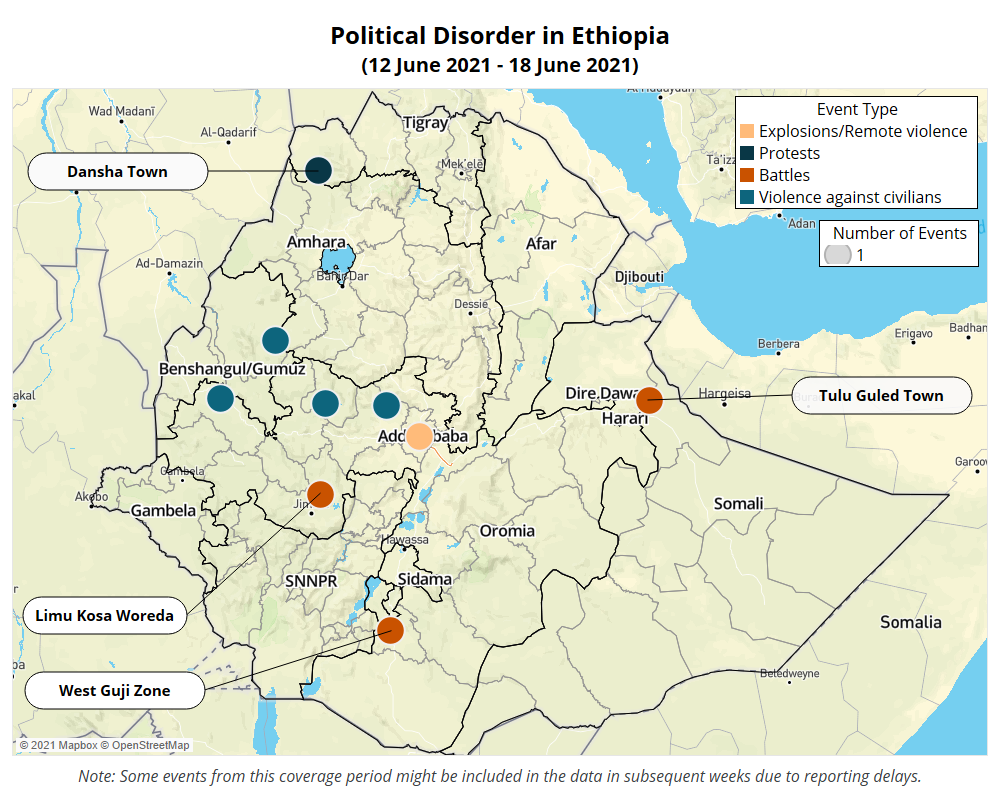 In the Tigray region, active conflict is still ongoing in the Central, South-Eastern, Eastern, North-Western, and Southern zones of the region, hindering operations by humanitarian organizations. Humanitarian organizations and NGOs have also reported denial of access and confiscation of different aid materials by both Ethiopian and Eritrean soldiers (UNOCHA, 17 June 2021). Although government officials insist that there is unlimited access for humanitarian organizations throughout the region, United Nations Office for the Coordination of Humanitarian Affairs (UNOCHA) reports that access to areas of Wajirat woreda in South-Eastern Tigray zone has been denied for over a month (UNOCHA, 17 June 2021).

Local partners have described the current pattern of fighting as “highly mobile” and “unpredictable,” further evidencing the transformation of the TPLF’s strategy of armed resistance into guerilla fighting. Rural areas of Tigray are especially dangerous as armed groups engage one another in skirmishes, forcing local populations to flee (UNCHA, 31 May 2021). The conflict has been devastating on rural farming populations, with an estimated 90% of the 2020 harvest lost (Reuters, 14 June 2021). To improve humanitarian access, the Tigray region provisional government announced the adoption of new procedures to ease passage for humanitarian organizations through military checkpoints (VOA Amharic, 19 June 2021).

The election campaigning period for the 2021 general election of Ethiopia ended on Wednesday, 16 June 2021. The four days leading up to voting on 21 June 2021 were considered as per election law a “period of silence” where campaign activities are not allowed (NEBE, 16 June 2021).

Prior to the cessation of campaign activities, a number of opposition parties held press briefings listing different irregularities experienced during the pre-election period. These accusations could provide the foundation for post-election disputes as they were not resolved before voting began. It is unclear if the political parties submitted their claims to the assigned electoral dispute resolution institutions as per the electoral regulations.

On the following day, five parties — including Hiber Ethiopia Democratic Party; All Ethiopian Unity Organization; Balderas for True Democracy (Balderas); National Movement of Amhara (NaMA); and Enat Party — released a joint press statement detailing the challenges and irregularities they faced during candidate registration, voter registration, and campaigning periods (Balderas for True Democracy, 13 June 2021). According to these parties, candidates were asked to present documents other than those required during the candidate registration period. During the voter registration period, registration centers faced delays during the initial registration period and during the opening of additional centers after voter quotas had been filled. The joint statement also complained that most voters failed to register, especially in selected areas of opposition support. In addition, the parties claimed that they faced a number of irregular restrictions on election campaigning in almost all regions of Ethiopia except Addis Ababa. They complained of harassment, beatings, threats, arrests, and even the killing of some candidates.

Similarly, on 16 June 2021, the Ethiopian Citizens for Social Justice (EZEMA) party released press statements regarding the challenges it faced during candidate registration, voter registration, cross-checking the electoral roll, and campaigning periods (Ethiopian Citizens for Social Justice – EZEMA, 16 June 2021). Most of the EZEMA party’s challenges and list of irregularities in candidate registration, voter registration, and campaigning periods matched those noted by other opposition political parties. EZEMA officials also detailed incidents where they were able to confirm the voter registration of persons younger than the voting age of 18. The party insinuated that if NEBE failed to resolve or respond to these irregularities, it would be forced to take the case to court.

The election was not held at all in three regions, namely Tigray, Somali, and Harari. Ethiopia’s northern Tigray province did not participate in this election due to ongoing insecurity and an active conflict involving the TPLF. In Somali and Harari regions, the general election was postponed to 6 September 2021 because of disputes over voter registration, irregularities, and errors in the printed ballots (NEBE, 11 June 2021; NEBE, 1 June 2021; NEBE, 22 May 2021).