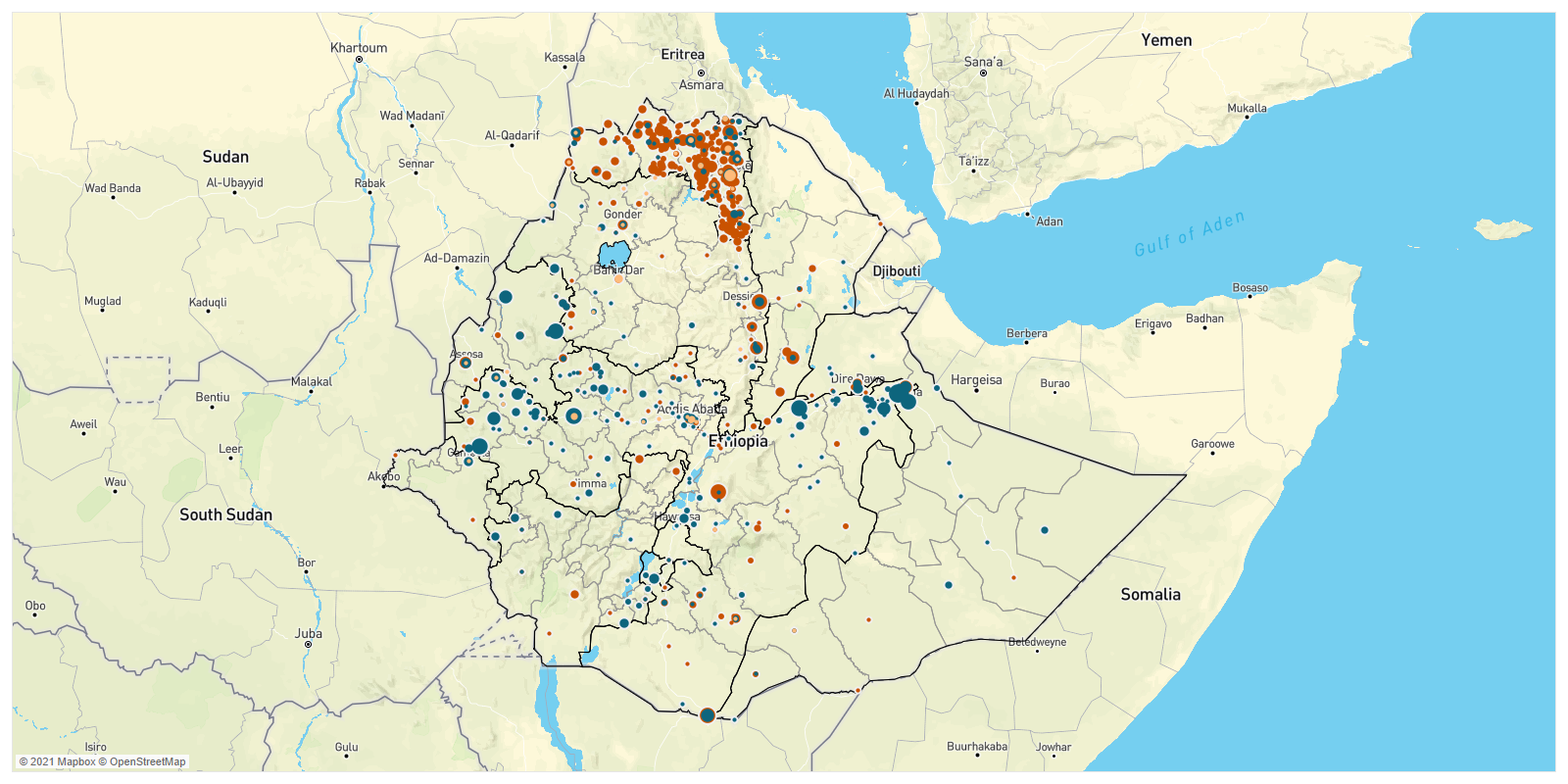 By the Numbers: Ethiopia, 3-9 July 20212Some events from this coverage period might be included in the data in subsequent weeks due to reporting delays. In particular, information about the current situation in Tigray with regards to civilian targeting is likely to come in slowly over the next couple of weeks. 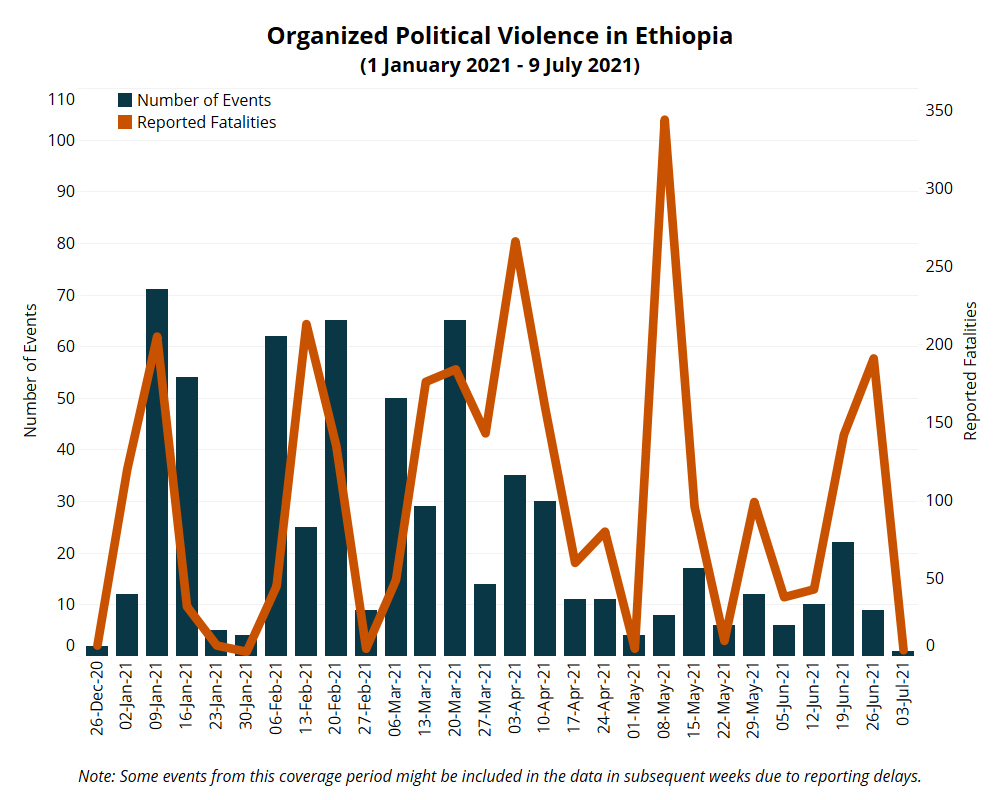 Last week, intense fighting in the Tigray region paused as a government-declared ceasefire took hold shortly after the Tigray People’s Liberation Front (TPLF) forces took control of the regional capital, Mekele. However, the ceasefire is not expected to hold much longer. Just after the unilateral ceasefire announcement, the TPLF promised to pursue Eritrean forces, the Ethiopian National Defense Force (ENDF), and Amhara regional forces (Reuters, 30 June 2021). Accordingly, there are signs that TPLF forces are regrouping and preparing to push non-Tigrayan forces out of the region. After taking control of Mekele and other major cities in the region, several sources have reported that the TPLF has targeted and killed pro-government officials and civilians who had supported the interim Tigray government formed by the federal government.

Meanwhile, on 3 July 2021, Oromo Liberation Front (OLF)-Shane forces killed four ethnic Amharas and injured three others in Gebergum kebele in Horo woreda of Horo Guduru zone in Oromia region (ESAT, 4 July 2021). Ethnic tensions are high in the area, and OLF-Shane fighters have been blamed for killing ethnic minority civilians on a regular basis. OLF-Shane denies this accusation and instead alleges that other militias operating in the region are responsible for the civilian deaths (see EPO’s West and Kellem Wollega conflict page).

The government’s effort to establish sustainable peace in Ataye and its surrounding areas continued last week. On 4 July 2021, a traditional reconciliation meeting was conducted in Shewa-Robit town (Amhara Media Corporation, 4 July 2021). Security in Ataye and its surrounding villages is currently being directed by a federal command post. The post was established on 18 April 2021 after Oromo militias and suspected militants from the OLF-Shane group clashed with Amhara regional special forces and federal troops (see EPO Weekly: 10-16 April 2021; EPO Weekly: 1-7 May 2021). OLF-Shane spokesmen have denied that the group operates in the Amhara region.

Weekly Focus: Understanding Political Conditions for a Mutual Ceasefire in the Tigray Region

One week after the federal government announced a unilateral ceasefire, the TPLF released seven conditions for a mutual ceasefire in the Tigray region (Getachew Reda, 4 July 2021). The TPLF conditions include the withdrawal of Eritrean soldiers and Amhara regional forces from the Tigray region. TPLF demanded full access to government services like telecommunication, electricity, banking, transportation, as well as unlimited humanitarian access to the region. The group also asked for an international independent investigation, the release of prisoners, and that all future negotiations be based on the current constitution of Ethiopia. In addition, the TPLF has stated that since the federal government failed to hold national elections on time as per the constitution, all regulations adopted by the federal government after October 2020 are considered “null and void” (Getachew Reda, 4 July 2021). TPLF representatives have indicated that Tigray Defence Forces (TDF) will continue to fight and clear non-Tigrayan forces from the region unless their conditions are met (Reuters, 6 July 2021; DW Amharic, 5 July 2021). There has been no official response by the federal government regarding these conditions for a mutual ceasefire. Nevertheless, the Ministry of Foreign Affairs spokesperson called these conditions “impossible” to implement when speaking with journalists on 9 July 2021 (DW Amharic, 9 July 2021).

The federal government and the TPLF have recognized that the conflict needs a “political solution,” suggesting that both parties have come to the realization that this conflict cannot be resolved by violence alone (Reuters, 6 July 2021; EBC, 5 July 2021). There is hope that this realization could open doors for the two groups to resolve the conflict through negotiation.

However, the issues that led to the conflict are deep-rooted and any political solution will be complex. For example, one of the most difficult issues to solve during negotiations between the government and the TPLF relates to the Western Tigray zone, currently controlled by the Amhara regional forces. Regional special forces and militias from the Amhara region flooded areas of the Western Tigray zone at the outset of the conflict in a territorial grab labeled by an Amhara regional spokesperson as “…taken by force and now returned by force” (Bloomberg, 16 March 2021; see also Amhara Media Corporation, 8 July 2021). The area had been under the Tigray region administration since 1991.

Western Tigray zone has been contested for the last 30 years and disputes over its administration have played a major role in the development of Amhara nationalist identity politics. Reacting to reported killings and jailing of ethnic Amhara living in Wolkait Tsegede and Setit Humera areas of Western Tigray, members of the Wolkait Identity Question Committee called for the zone to be administered under Amhara regional state (Foreign Policy, 28 April 2021, Amhara Media Corporation, 8 July 2021). The attempted arrest of members of the Committee sparked a series of protests throughout 2016, 2017, and 2018. Together with the Qeerroo movement in the Oromia region which started in 2015, these demonstrations eventually forced the TPLF dominated Ethiopian People’s Revolutionary Democratic Front (EPRDF) to appoint Abiy Ahmed as Primer Minister in April 2018.

More recent events involving the death of hundreds of people also complicate a political resolution to the conflict. Near the outset of the conflict, more than 600 ethnic Amhara were killed by a Tigrayan youth group called Samri in a small area of Western Tigray called Maikadra (Mai Cadera) (Ethiopian Human Rights Commission, 24 November 2020; Reuters, 7 June 2021). A recent investigation by Reuters found that groups associated with both Tigray and Amhara ethnicities had killed civilians at Maikadra (Reuters, 7 June 2021). The Amhara regional forces have been accused of forcibly removing ethnic Tigrayans from the Western Tigray zone after seizing control — an act that the United States has determined to be ethnic cleansing (AP, 7 April 2021).

There are other trends that point towards more serious fighting occurring in the coming weeks. TPLF forces have been accused of massacring pro-government officials and civilians who supported the federally appointed interim government after the TPLF was ousted in the early months of the war (EBC, 7 July 2021). A representative of the Raya Rayuma party has claimed that fifty civilians were brutally killed in Raya Azebo by TPLF militants as they took control of the area after the withdrawal of the federal military (EBC, 7 July 2021). An unknown number of youths from the area are still missing after being taken by TPLF affiliated militias (EBC, 7 July 2021). Additionally, according to the United Nations High Commissioner for Refugees (UNHCR) Ethiopia office, there are reports that hundreds of Eritrean refugees in the western town of Shire were allegedly killed by TPLF affiliated forces (BBC, 5 July 2021). There were around 100,000 Eritrean refugees in the region before the Tigray conflict began in November 2020 (BBC, 5 July 2021).

The contested territory along the border of Eritrea also poses challenges. Forces from neighboring Eritrea have withdrawn from Tigray region, with the exception of Badme, a disputed border town. In June 2018, the Ethiopian government decided to accept and implement the 2002 decision of the Eritrea–Ethiopia Boundary Commission which placed Badme in Eritrea (The Washington Post, 5 June 2018). The TPLF’s call for Eritrean forces to withdraw to their pre-Tigray conflict positions disregards the federal government’s decision to respect the outcome of the Boundary Commission and complicates negotiations with the Eritrean authorities.

As the government’s unilateral ceasefire allows much-needed time for both parties to consider the implications of future conflict, there is some hope that the current environment could foster a negotiated political solution and a permanent end to fighting. However, issues surrounding TPLF’s control of territory and relations with the federal government complicate matters. There are demands that are clearly incompatible. The TPLF’s insistence, for example, that negotiations be based on the current Ethiopian constitution while simultaneously asking federal forces not to enter the Tigray region as a precondition for a mutual ceasefire is a direct contradiction. The Ethiopian constitution mandates the federal government to administer various public goods such as air transport, major roads linking two or more states, and telecommunication services which are located within the Tigray region (Constitution of the Federal Democratic Republic of Ethiopia, 1995, Article 51). Thus, it would be impractical for the federal government to respect the constitution and not enter the Tigray region as demanded by TPLF as a condition for a mutual ceasefire.

If progress is to be made, the people of the region will need to be prioritized and violent conflict stopped. A solution must be found for the contested territory of the Western Tigray zone that considers the rights of all current and former inhabitants. However, given the military buildup by all conflicting parties occurring in the Western Tigray zone, it seems that this is unlikely to occur anytime soon.

In total, 31 of 46 political parties and seven independent candidates have submitted election-related dispute claims to the National Electoral Board of Ethiopia (NEBE) (NEBE Press Briefing, 5 July 2021). These claims concern 165 of the total 673 election constituencies (NEBE Press Briefing, 5 July 2021; see NEBE’s list of Election Constituencies and Polling Stations). Elections in 70 of the 673 election constituencies will be held on 6 September 2021.

Voting was held in the remaining 30 of 139 polling stations in the Arsi Negele electoral constituency in the Oromia region on 8 July 2021 (EBC, 8 July 2021). Voting had been delayed when not all of the candidate’s names appeared on the printed ballot during voting last month — an issue that was resolved when the missing candidate simply dropped out of the election. Miscommunication between electoral organizers meant that voting had been canceled in some locations and not others during the voting period. The remaining locations finally voted during the last week (NEBE Press Briefing, 5 July 2021).

On 10 July 2021, NEBE announced the official outcome of the election. On 21 June 2021, the election was held for 436 of 547 seats of the House of Peoples’ Representatives (NEBE, 12 July 2021). Out of these 436 seats, the ruling party, Prosperity Party, won 410 seats. In comparison, the National Movement of Amhara (NaMA) won five seats, and the Ethiopian Citizens for Social Justice (EZEMA) won four seats. Independent candidates gained four seats, and the Gedeyo People Democracy party won two seats (EBC, 10 July 2021; NEBE, 12 July 2021). Other than 38 seats reserved for the Tigray region, the election for the remaining 99 seats will be held on 6 September 2021.3See EPO Weekly: 12-18 June 2021 for the list of areas where the election will be held in September 2021.

At the moment, it is not clear whether the parties that submitted the election-related disputes to the NEBE will appeal their cases to the assigned courts. Given the heavy security crackdowns, the threat of arrest, and high levels of co-optation by officials in office, parties are less likely to mobilize violent opposition to the election results.

For a more detailed analysis from the ACLED EPO team regarding the post-election period, see EPO Weekly: 19-25 June 2021 and our latest special report: It Cannot Be Known: Ethiopia’s Election and Abiy’s Political Prospects.