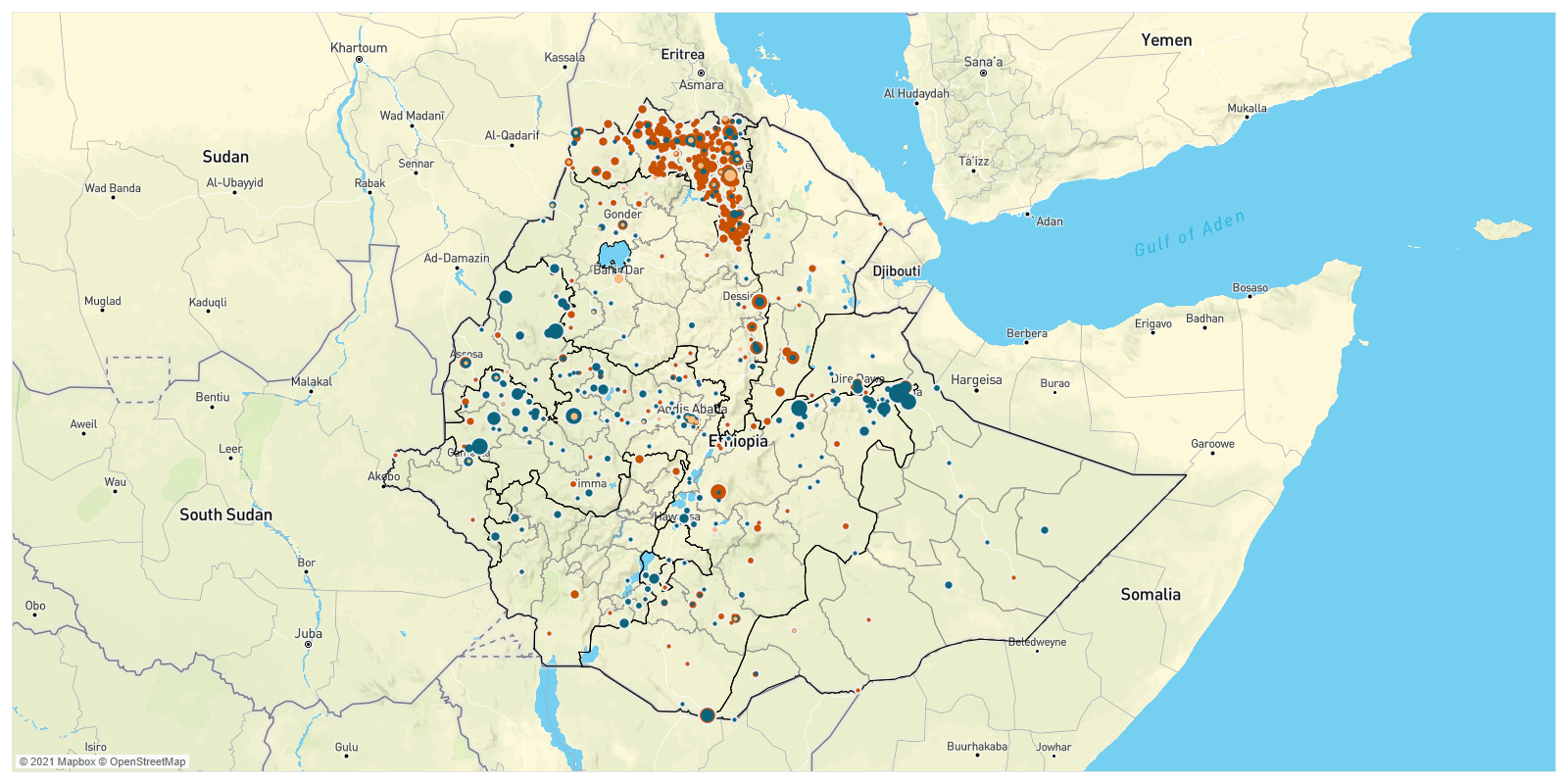 By the Numbers: Ethiopia, 10–16 July 20212Some events from this coverage period might be included in the data in subsequent weeks due to reporting delays. In particular, information about the current situation in Tigray with regards to civilian targeting is likely to come in slowly over the next couple of weeks. 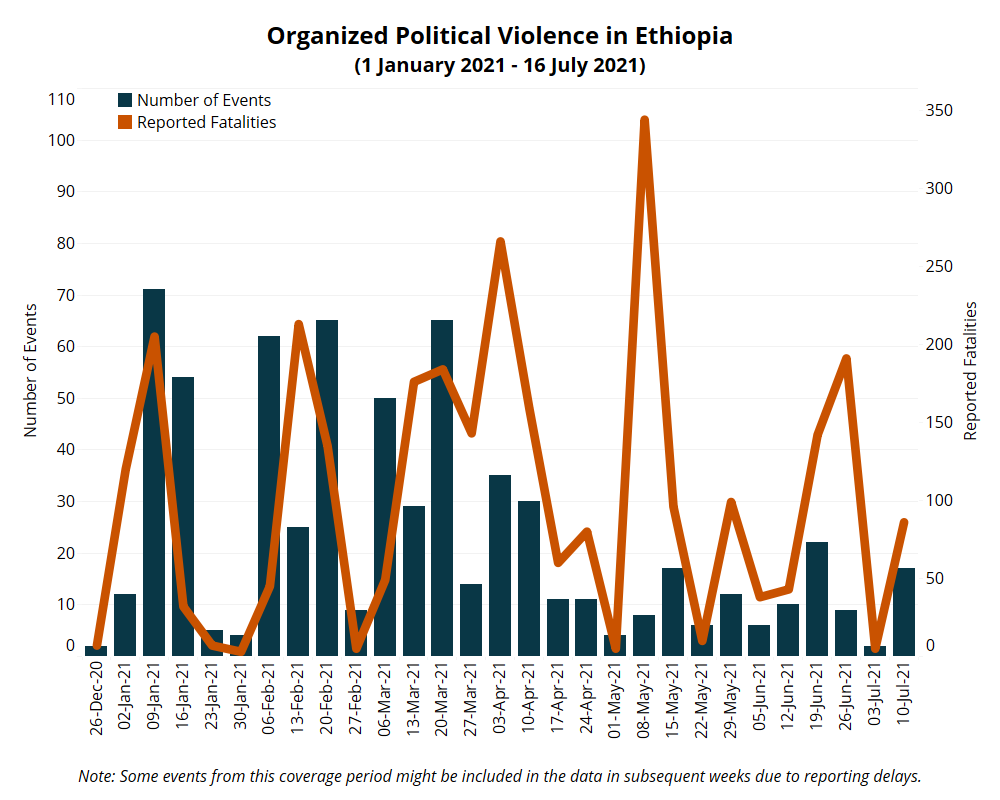 Last week, the Tigray People’s Liberation Front (TPLF) forces continued to advance in both the Western and Southern fronts of the Tigray region, crossing the Tekeze River to seize control of May Tsebri, Alamata, and Korem towns after clashes against Amhara regional special forces. Meanwhile, thousands of militiamen from the Amhara region have gathered in Adi Arkay, just south of the border between Tigray and Amhara region, and are ready to engage TPLF troops in the coming weeks (France 24, 15 July 2021).

After months of relative calm, violence reignited in the Metekel zone in Benshangul/Gumuz region last week after a farmer was killed by suspected ethnic Gumuz gunmen in Emanji kebele of Bulen woreda. The following day, on their way to the farmer’s funeral, the family of the deceased farmer clashed with ethnic Gumuz individuals who came to the Saturday market. At least 15 people died and nine people were injured (Ethiopia Insider, 12 July 2021; Ethiopian Human Rights Commission, 16 July 2021). In response, the command post stationed in the Metekel zone set a curfew in the woreda. Several people have been arrested in connection with this violence (Ethiopia Insider, 12 July 2021).  Despite heightened security, on 15 July 2021, an additional eight people were killed in Denbe kebele during communal clashes. The Ethiopian Human Rights Commission stated that around 4,000 people have been internally displaced due to the most recent bout of unrest (Ethiopian Human Rights Commission, 16 July 2021).

Despite the government’s unilateral ceasefire and the dire humanitarian situation in the Tigray region, TPLF forces re-initiated the conflict against regional and federal forces controlling areas of the region last week. Vowing to “liberate every square inch of Tigray”, TPLF militias have moved south to take control of contested territory along the Amhara regional state border (France24, 15 July 2021). Continued expansion by the group has prompted the mobilization of both regular and irregular forces throughout the country. 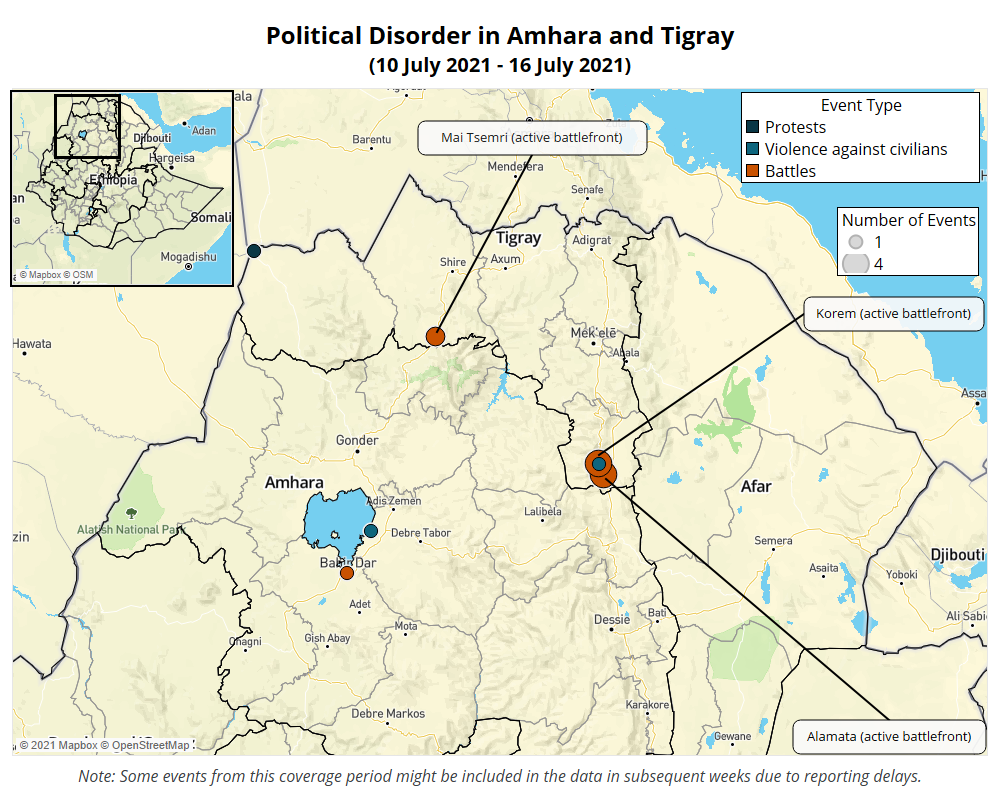 By 15 July 2021, Amhara regional forces claimed to have retaken control of territory captured by TPLF forces at the beginning of last week (DW Amharic, 17 July 2021; VOA Amharic, 16 July 2021). These claims have not yet been verified and fighting is ongoing.

Due to the highly ethnicized nature of the conflict, civilians on both sides have borne the brunt of heavy violence in an environment of intensified conflict. On 13 July 2021, TPLF forces reportedly killed 18 civilians after taking control of Korem town (Borkena, 13 July 2021) As well, around 14 July 2021, at least one Eritrean refugee was killed during a shootout in the Mai Aini refugee camp, North-Western Tigray zone. Sources have noted credible reports of arrests, detentions, beatings, looting, and sporadic gunfire in refugee-inhabited areas (UNHCR, 5 July 2021). An unknown number of Eritrean refugees living in different areas of the Tigray region have been killed or incarcerated (Fana Broadcasting Corporate, 14 July 2021; Statement by UN High Commissioner for Refugees Filippo Grandi, 13 July 2021).

On 13 July 2021, Tigrayans who live in Humera in the Western Tigray zone, currently administered by the Amhara regional government, demonstrated against continued instability (Amhara Media Corporation, 14 July 2021). Furthermore, 323 Tigrayans were arrested in Addis Ababa on suspicion of supporting TPLF (Ethiopia Broadcasting Corporation, 17 July 2021). Three residents of ethnic Tigrayan origin were killed by a mob attack in Woreta, Fogera woreda, South Gondar zone of the Amhara region on 11 July 2021 (Ethiopian Human Rights Commission, 15 July 2021). The mob attack occurred after government-affiliated militiamen from Fogera woreda were killed by TPLF in the Feyel Weha area (Ethiopian Human Rights Commission, 15 July 2021). In the coming weeks, civilians are likely to continue suffering as they are caught between warring factions in an ethnized environment.

Meanwhile, 1,000 metric tons of food sent by the World Food Program (WFP) arrived in Mekele through the Afar region (Amhara Media Corporation, 12 July 2021). Additional food and aid material were delivered via plane. Over the weekend, a convoy of 60 vehicles carrying food and non-food items en route to Mekelle via the Afar region was delayed when TPLF forces shelled locations near the road (Amhara Media Corporation, 17 July 2021; Ethiopia Broadcasting Corporation, 16 July 2021). The Afar regional government claimed that on 17 July 2021, TPLF attacked a pastoralist camp in Yalo Woreda in Fantí Rasu – zone 4 (Afar Regional State Communication Affairs Office, 17 July 2021). So far, there has been no report on the number of fatalities.3This event will be included in the ACLED data next week and covered in next week’s EPO Weekly report.