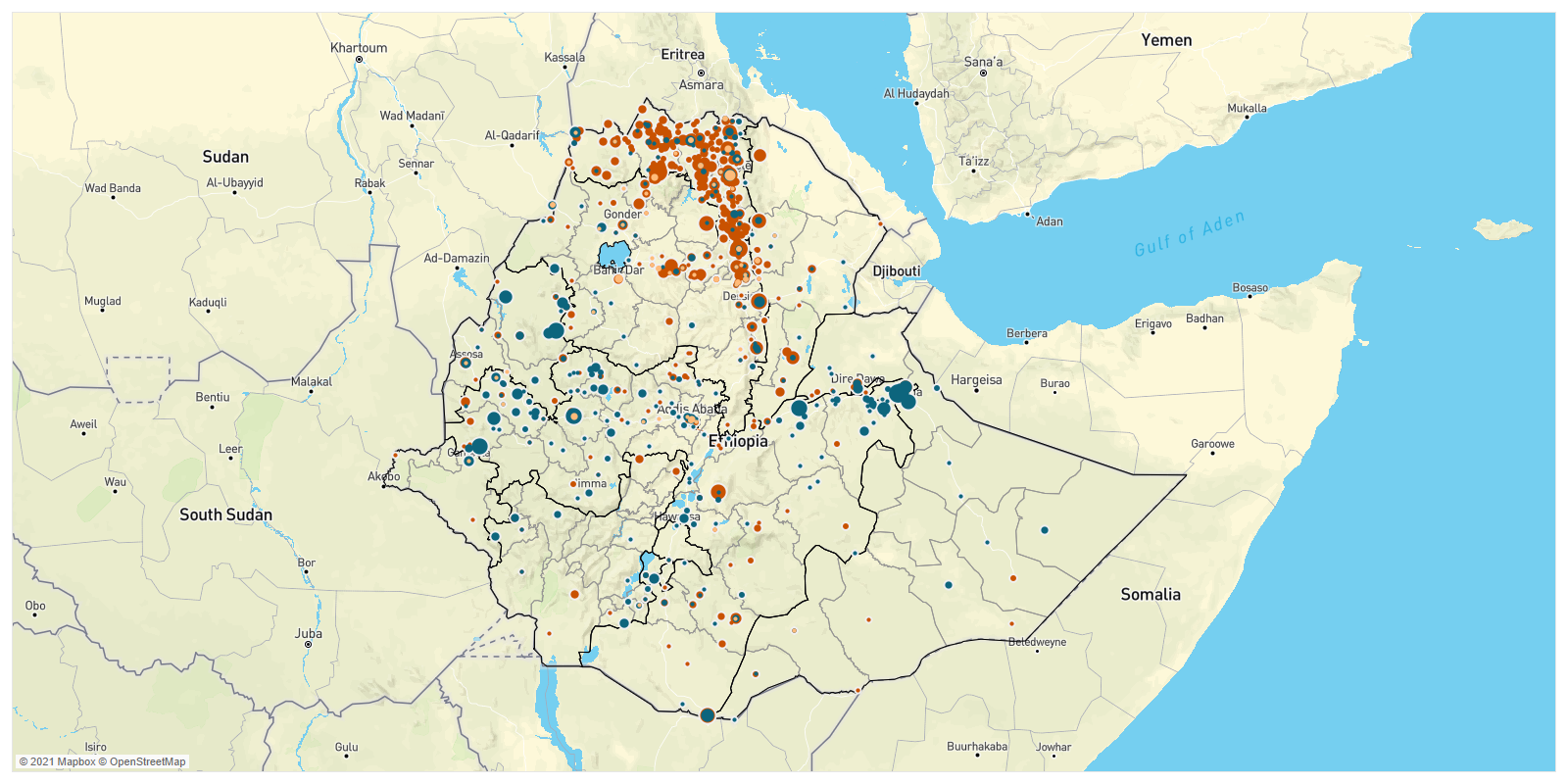 By the Numbers: Ethiopia, 9-15 October 20212 Some events from this coverage period might be included in the data in subsequent weeks due to reporting delays. 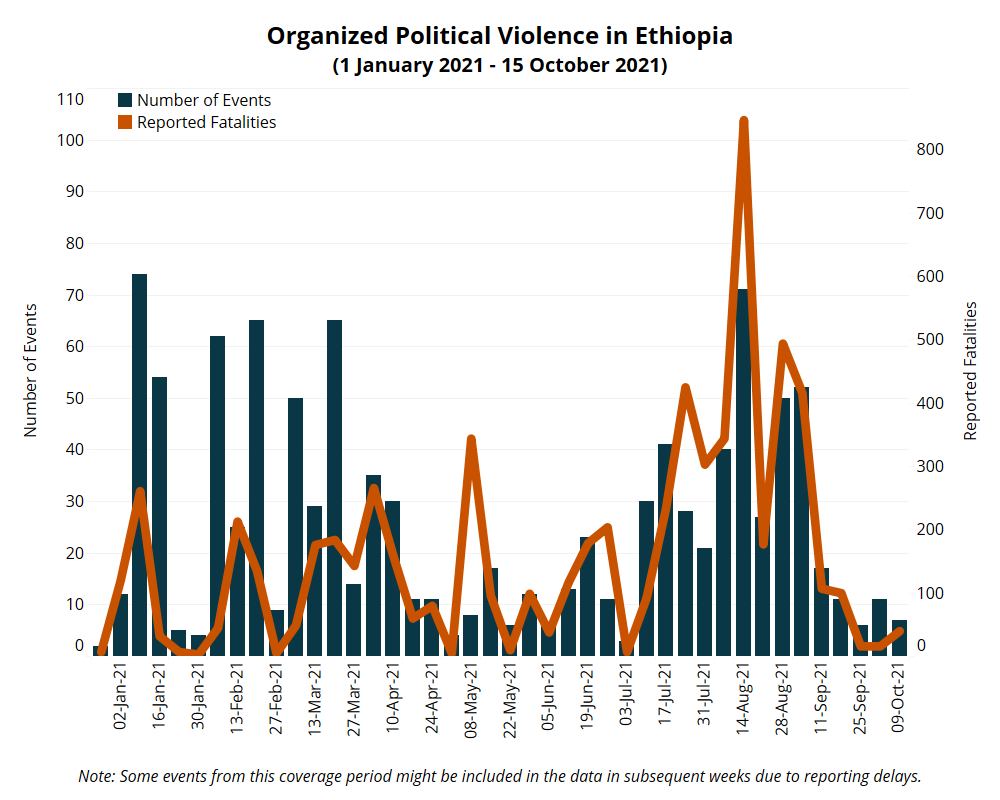 After a period of relative calm, the conflict between the Tigray People’s Liberation Front (TPLF) and the government reignited last week. Each side accused the other of initiating a new round of armed clashes in the Amhara region. Due to a lack of credible information, details of the clashes are sparse. Clashes last week were mainly concentrated in the North Wello zone, specifically in Wirgessa, Wegeltena, and Haro towns, as well as in Wuchale, Tehuledere, Werebabo, and Delanta areas in the South Wello zone. An unspecified number of people were killed during the clashes, including civilians killed by shelling. Shelling by TPLF forces was also reported on 13 October 2021 in the Afar region, reportedly killing seven civilians and wounding 15 others (DW Amharic, 13 October 2021).

On 11 October 2021, students who were formerly attending universities in the Tigray region gathered outside of the Ministry of Education in Addis Ababa to protest the failure of the ministry to re-assign them to new universities or properly inform them about their options for re-assignment. The ongoing conflict in the north has led to the closure of universities in affected regions.

Last week, two senior United Nations officials, including the International Organisation for Migration’s (IOM) chief representative in Ethiopia and the United Nations Population Fund (UNFPA) representative to Ethiopia, were recalled to headquarters and put on administrative leave (Reuters, 13 October 2021). This decision came after an audio recording of the two UN officials was leaked online. The officials were heard on the recording saying that “some top UN officials globally sympathise with forces from the northern Tigray region that are fighting Ethiopia’s government” (Reuters, 13 October 2021). On 30 September 2021, the Ethiopian government expelled seven high-ranking officials from both the United Nations Children’s Fund (UNICEF) and the United Nations Office for the Coordination of Humanitarian Affairs (UNOCHA), accusing them of disseminating misinformation and politicizing humanitarian assistance (The Ministry of Foreign Affairs of Ethiopia, 1 October 2021).

Both the TPLF and the Ethiopian federal government have made claims that their positions were attacked during the last week, reigniting intense conflict in the Amhara region’s North and South Wello zones. Although an official ceasefire was never declared, a clear lull in fighting had occurred prior to the resumption of clashes on the ground on 11 October 2021. Amid pressure from the international community — including threats of sanctions by the United States and the European Union — both sides of the conflict have sought to control the narrative and claim that the other side has re-initiated hostilities (Josep Borrell Fontelles Twitter, 18 October 2021).  Via an official press release, TPLF forces claimed that federal troops and allied “Amhara forces” had begun an all-out offensive on the morning of 11 October 2021 (Getachew Reda Twitter, 11 October 2021). A press release by the Ethiopian national government a few days later accused the TPLF of restarting the conflict by shelling Chifra and Wuchale towns, reportedly killing 30 civilians (The Ministry of Foreign Affairs of Ethiopia, 18 October 2021).

Rhetoric by both warring parties has been inflammatory over the past week and has been accompanied by armed conflict on the ground. Shortly after the conflict resumed, ENDF issued a statement via its Facebook page and government-associated media stating that “it should be noted that if the army launches a full-scale attack according to its own plan, it will be done without [the TPLF] even having time to claim it had been attacked” (DW Amharic, 12 October 2021). These statements were later deleted from the ENDF’s Facebook page and other websites.

On 11 October, as fighting resumed in North Wello, a statement by Major General Yilma Merdassa, Commander-in-Chief of the Ethiopian Air Force, claimed that the Ethiopian air force was updating its weapons in preparation to “reverse” TPLF actions (EBC, 11 October 2021). Airstrikes were later carried out, hitting the Tigray regional capital (initially denied by the federal government) and reportedly killing three civilians. Government sources claimed that the strikes were targeting a communications tower (Reuters, 18 October 2021).

Although details are unclear amid a series of claims and counter-claims, what is clear is that intense conflict has resumed in the Amhara region’s North and South Wello zones, as well as in areas along the Afar/Amhara region border (see map below). Initial (unconfirmed) reports also indicate that the TPLF is advancing rapidly southward, and has taken control of Wegeltena town (Ethiopia Map, 18 October 2021; Getachew Reda Twitter, 18 October 2021). Militia from the Amhara region is moving from Dessie and Kombulcha north toward the fighting. This follows the South Wello zone administration’s call for locals to join the ENDF and the Amhara regional special forces. Journalists have recently reported gunfire as near as Kombulcha town (Eyder Peralta Twitter, 19 October 2021). 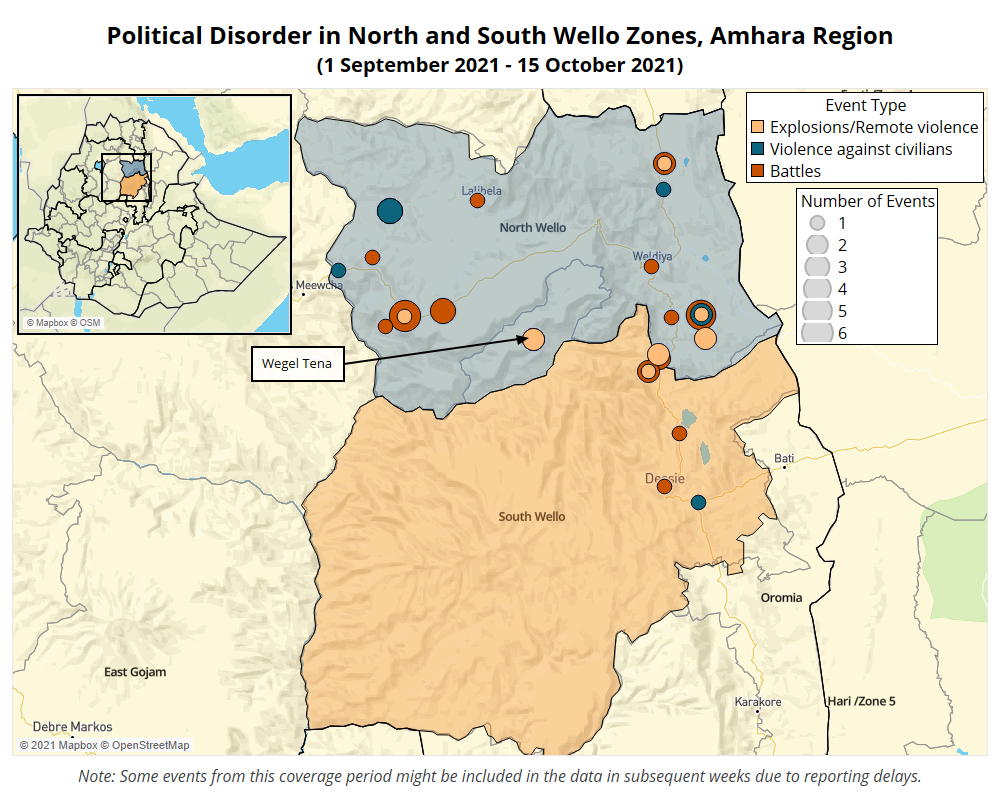 The most recent fighting has caused a new wave of displacement in the Amhara and Afar regions (BBC Amharic, 15 October 2021). Dessie town in the South Wello zone, in particular, has seen an influx of civilians fleeing fighting. Shelling in Amhara and Afar regions throughout the week by TPLF forces has damaged additional infrastructure and threatened civilians in conflict areas. Meanwhile, the most recent airstrike on Mekelle could indicate that the Ethiopian government may rely more heavily on its air force capacity throughout the coming weeks. This would threaten civilians and infrastructure in Tigray’s largest cities where displaced people from across the region have gathered.

Last week, the National Election Board of Ethiopia (NEBE) announced the outcome of both the general election and referendum held on 30 September 2021. Elections were held in areas where they had been delayed since June, including in some election constituencies3Specifically, elections were held in 31 constituencies in SNNPR for regional council seats and 22 constituencies in SNNPR for the House of Representatives. in Southern Nations, Nationalities and Peoples Region (SNNPR), as well as in Harari and Somali regions.

The ruling Prosperity Party won the majority of seats in almost all regional councils, except the Benshangul/Gumuz regional council. In Benshangul/Gumuz region, out of the 99 regional council seats, elections were only held for 34 seats. Elections were not held in Metekel and Kamashi zones due to security reasons. Out of these 34 seats, the Prosperity Party won 28 seats. Meanwhile, the electoral results of six constituencies were annulled. Moreover, the election was not held in the Tigray region due to the ongoing conflict; it is not clear when the election will be held in the region. The Tigray region has 38 seats in the House of Representatives. It is also still unknown when elections will be held in areas in Amhara and Oromia regions where they were delayed due to security reasons.

Meanwhile, NEBE announced the outcome of a referendum deciding whether a new region of Ethiopia would be formed comprising Konta special woreda and West Omo, Bench Sheko, Dawro, and Sheka zones which were administered under SNNPR. The referendum passed, establishing the eleventh region of Ethiopia called the Southwest Ethiopia People’s region (NEBE, 9 October 2021). It is expected that the new region will officially be established on 8 November 2021 after the House of Federation accepts the outcome of the referendum. The region will be bounded by SNNPR to the east, Oromia region to the north, Gambela region to the west, and South Sudan to the south. However, there are still unsettled administrative issues such as agreeing on the administrative center of the region. According to the drafted constitution of the region, which has not yet been finalized and approved by the new region’s council, multiple administrative centers will be established at different locations throughout the region (BBC Amharic, 12 October 2021).

It is also unclear how administrative disputes will be resolved in the zones comprising the region. Such disputes have been the root cause of frequent violent conflict in the Bench Sheko zone over the past year. The zone has been the site of conflict over resources and administrative rights between those who are considered indigenous and those regarded as settlers. Over the past year,5From 1 October 2020 to 1 October 2021. ACLED records 8 organized political violence events causing 99 fatalities in the Bench Sheko zone (see EPO’s Bench Sheko (Bench Maji zone) Conflict). It is thus important that administrative structures be established that can resolve such conflicts in this new region.