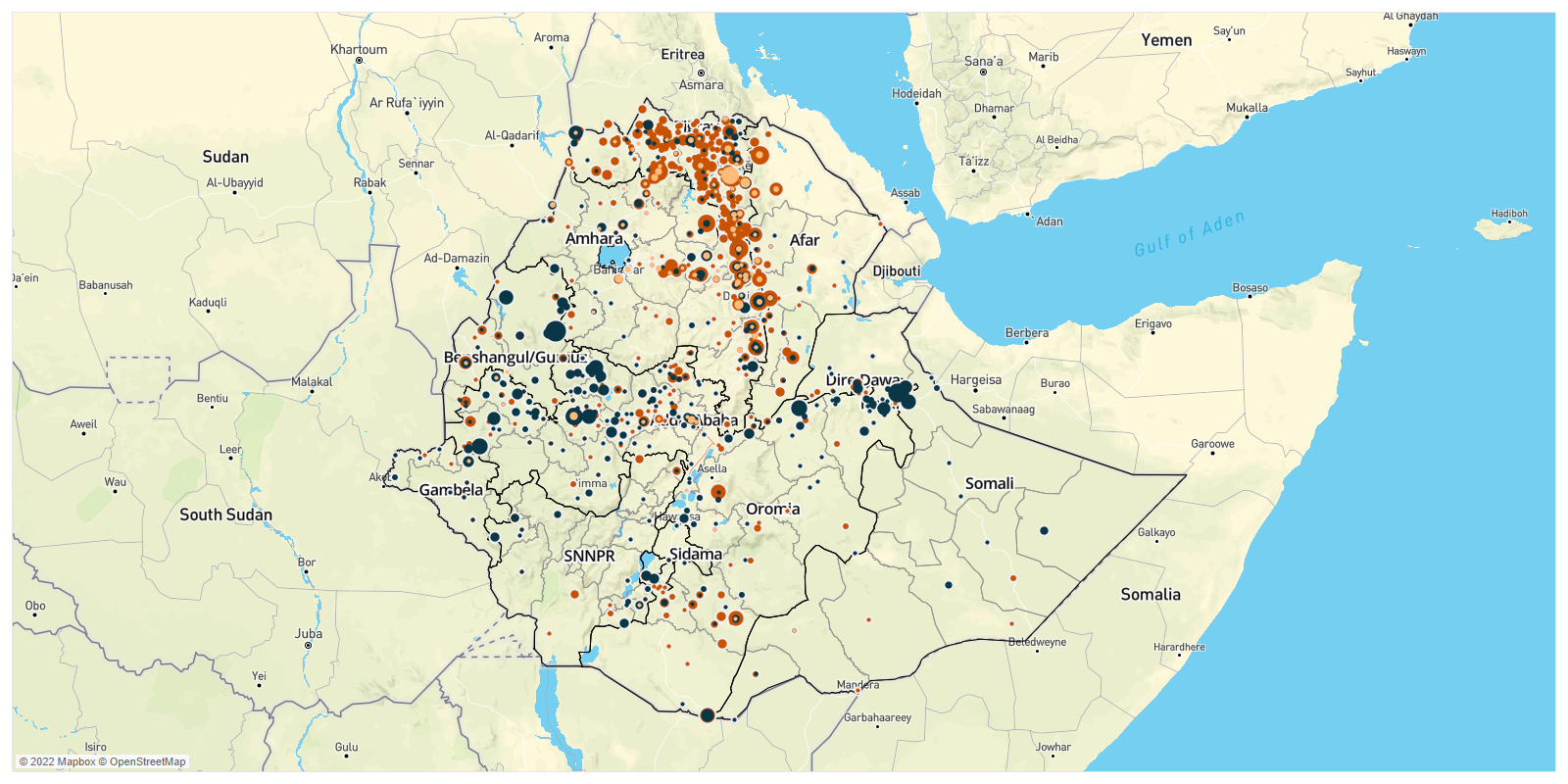 By the Numbers: Ethiopia, 26 March-1 April 2022 2Some events from this coverage period might be included in the data in subsequent weeks due to reporting delays. 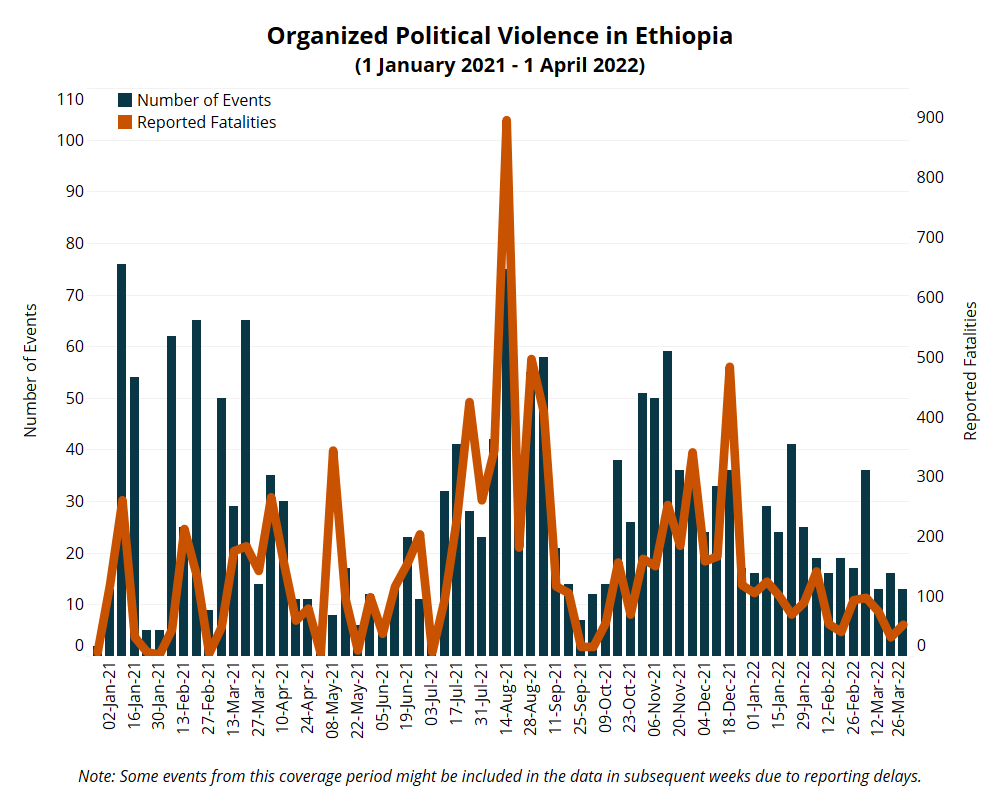 Last week, several attacks were reported in Segen Area People’s zone and Konso zone in Southern Nations, Nationalities and Peoples region (SNNPR) (see map below). On 26 March, an unidentified militia clashed with Konso ethnic militia and SNNPR regional special forces in Dimaya in Karat Zuria in Konso zone, over disputed agricultural land. The clashes resulted in an unknown number of fatalities. Dimaya is located at the borders of Ale special woreda and Konso zone and is contested by both administrations. The same day, the head of the Segen Area woreda revenue office was shot and killed by members of an unidentified armed group in Segen while eating dinner with his friends at a restaurant. A day later, unidentified armed men from Ale special woreda attacked civilians in Dimiya, Segen, and Kolme cluster areas in Konso zone, killing nine people and injuring 13 others. They also burned several homes. On 31 March, unidentified armed men from Derashe special woreda shot and killed a kebele administrator along with a local militia member and two civilians in Segen Area People’s zone. Conflict in this area erupted after Konso woreda became a zone and Ale woreda became a special woreda in 2018. Previously, these areas were administered under Segen Area People’s zone, which was established on 28 March 2011 and consisted of Amaro, Burji, Derashe, Konso, and Ale woredas. Most conflicts in these areas are linked to border disputes (for more details on the dynamics of the conflict, see EPO’s Segen Area People’s Zone Conflict page). 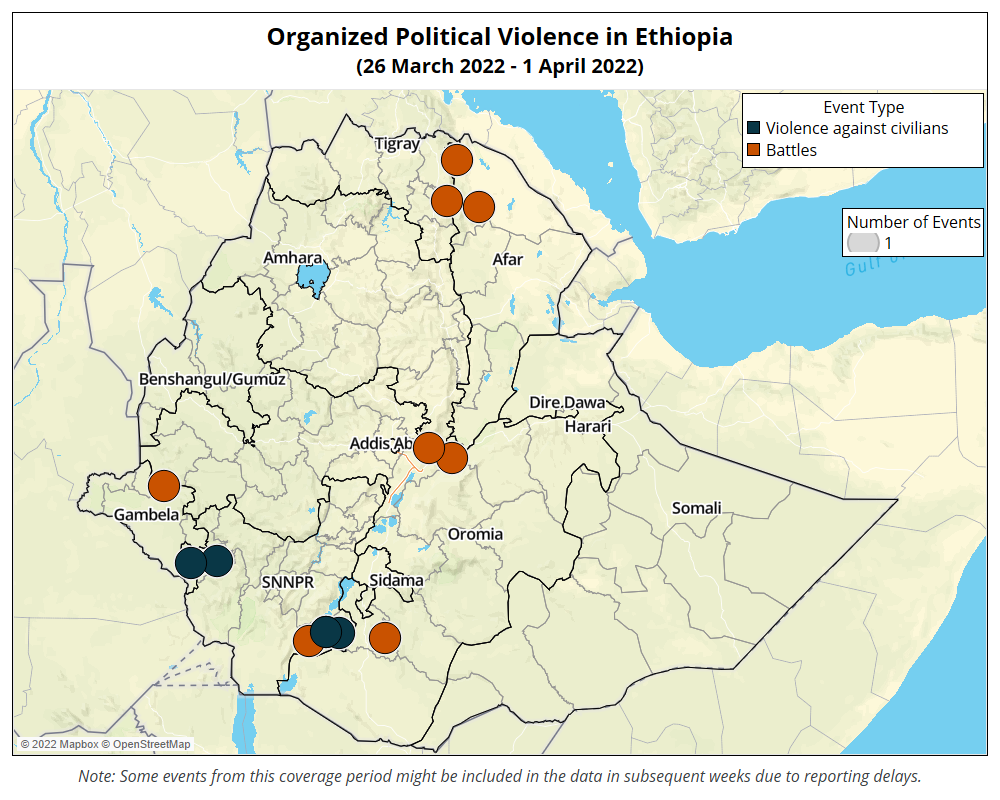 There is also tension in Kuse in Gurage zone in SNNPR. Kuse borders Hadiya zone and it is contested by both Gurage and Hadiya zones (DW Amharic, 28 March 2022). The area was incorporated in Gurage zone through a referendum. Recently, Kuse initiated the process to be identified as a town in the same zone. However, since 2018 some youth groups from Hadiya have started a petition to make Kuse part of Hadiya zone.

Last week, Afar regional special forces and associated militias continued clashing against Tigray People’s Liberation Front (TPLF) forces in Erebti woreda, Gubi Kebele in Abala woreda, and Sokardora kebele in Konneba woreda, in Kilbati Rasu-Zone 2 in Afar region. Despite ongoing fighting, by the end of the week, several trucks carrying humanitarian aid arrived in Tigray region through the Semera-Abala-Mekele route (ICRC, 2 April 2022; Twitter @reda_getachew, 1 April 2022). This is the first delivery of humanitarian aid with vehicles since 15 December 2021. Both parties agreed to halt armed clashes for humanitarian assistance on 24 March. Moreover, nearly 39 metric tons of nutrition supplies were also delivered with planes flying from Addis Ababa to Mekele in Tigray region (UNOCHA, 31 March 2022). There are two humanitarian flights per week from the capital to Mekele. Yet, the need for humanitarian assistance is still high in Tigray region (UNOCHA, 31 March 2022; BBC Amharic, 1 April 2022).

Internally displaced persons (IDPs) from Tigray continue to arrive in Amhara region, seeking humanitarian assistance. There are also reports of daily displacements in six woredas in Kilbati Rasu-Zone 2 in Afar region (UNOCHA, 31 March 2022). In addition, the conditions of IDPs, especially women and children, in Wag Hemra zone in Amhara region are dire (Amhara Media Corporation, 29 March 2022; DW Amharic, 30 March 2022). Last week, the Amhara region Communications Office stated that the number of IDPs due to the conflict is increasing and as of last week, over 11 million people were internally displaced and in need of humanitarian assistance (Ethiopian Press Agency, 1 April 2022). Even though more than nine million IDPs have returned to their homes, they still need assistance because either their livelihoods were destroyed, or they missed the farming season. The rest of them are still in IDP shelters or staying with their relatives.

In addition, on 27 March, members of the federal police and Gambela regional special forces exchanged fire at Gambela University in Gambela region for an unknown reason. One person was killed and another injured.

Last week, several mass graves were discovered in an area known as Gehaneb (hell) in Welkait in Western Tigray zone in Tigray region. It is believed that most of the victims were ethnic Amharas who opposed the TPLF and were killed at different points in time since the 1990s. At the outset of the Tigray conflict in November 2020, Amhara regional forces controlled Welkait, Humera, and Tsegede areas in Western Tigray zone. The Amharas living in these areas have been demanding to be part of Amhara region for decades (Amhara Media Corporation, 3 April 2022).

At the height of anti-TPLF demonstrations in 2016, one of the most powerful alliances to emerge against the TPLF was a coordinated alliance between Oromo and Amhara demonstrators (African Arguments, 27 September 2016). The violent response of the TPLF leadership against the demonstrators in both regions fostered a shared sense of repression, uniting demonstration movements that ultimately led to the resignation of Prime Minister Hailemariam Desalegn and kick-started a massive political change in Ethiopia.

Since Prime Minister Abiy Ahmed took office in 2018, things have turned for the worse for the Oromo-Amhara relationship, crossing internal political divides in both regions. Tensions have arisen between the regional wings of the ruling Prosperity Party, and outright fighting is ongoing between ethno-nationalist elements of both sides. Clashes between forces from the two regions last week represent a dangerous escalation of a tense and multi-faceted situation. At its base, these clashes between forces from Amhara region and those from Oromia region are little more than a contested boundary dispute. While these are common in Ethiopia and tend to remain localized, the risk of escalated fighting due to deep political differences at the regional level is high.

In Amhara region, anger at the ruling government, and in particular, the Oromia Prosperity Party, has been building due to the ongoing killing of ethnic Amhara civilians in Oromia region. In April 2021, large demonstrations were held throughout the region in response to deadly attacks that took place in Ataye in Oromia special zone in Amhara region. Amhara ethno-nationalist political organizations like the National Movement of the Amhara (NaMA) participated in these demonstrations and now make up part of the ruling government in Ethiopia (see the EPO Monthly: April 2021 for additional information). Throughout the past three years, Amhara officials and activists have condemned the Oromia regional government for not taking adequate measures to protect Amhara civilians in Oromia region. ACLED records at least 420 fatalities related to violence targeting ethnic Amhara civilians in Oromia region since April 2018.

In Oromia region, similar tensions have been building, with accusations that Amhara militias have been forcibly seizing territory from areas previously administered by Oromia region. Battles and attacks involving Amhara ethnic militias in Oromia led to at least 330 reported fatalities since 1 April 2021.

Last week, there was a major escalation of tensions between the two regions. At the border of Amhara and Oromia regions, two instances of armed clashes were reported. According to the Minjar Shenkora woreda administration officials in Amhara region, on 29 March, an unknown number of people were killed and injured due to an attack by an unidentified armed group in Amorabet kebele in Minjar Shenkora woreda in North Shewa zone in Amhara region (Menjar Shekora Woreda Communication, 30 March 2022). On the same day, an unidentified armed group — labeled as a “radical Amhara armed group” by officials from Oromia region –  ambushed local militias and police from Oromia region as they traveled through Korke/Awera Godana area, which is contested between East Shewa zone in Oromia region and North Shewa Zone in Amhara region (Addis Standard, 31 March 2022). According to officials from Oromia region, 28 people were killed and another 15 injured in the ensuing clashes (Reuters, 31 March 2022). Due to this attack, the main road connecting the capital city to Djibouti was closed for several hours. The Awera Godana or Korke area has been placed under the control of the federal police for the past few months (DW Amharic, 31 March 2022).

The officials of Amhara and Oromia regions immediately contested each other’s narrative of the event and tensions are still high (DW Amharic, 31 March 2022; ESAT, 31 March 2022). On 4 April, the Oromia regional state government issued a statement warning “an unnamed group that it referred to [as] ‘extremist forces operating in the name of Amhara’” (Addis Standard, 4 April 2022). The statement drew condemnation from an influential group of diaspora, the Amhara Association of America, which accused the Oromia regional government of “using government vehicles” to invade Awra Godana town (Amhara Association of America, 4 April 2022). The North Shewa Zone administration claimed the events occurred after the Oromo militiamen had shot and killed a federal police officer (Amhara Communications, 31 March 2022).

While fighting in Tigray region has drawn the most international attention, divisions between the Oromo and Amhara wings of the ruling party and active ethno-nationalist forces on both sides are one of the most dangerous trends in the country today. Both Amhara and Oromia regions have drastically expanded their special force programs and any direct fighting between forces from the two regions would exceed the abilities of the federal government to subdue.

In addition to these special forces, the presence of radical ethno-nationalist organizations from both regions further complicates peace efforts. In Oromia region, OLF-Shane forces are accused of killing hundreds of Amhara civilians and regularly clash with Amhara militias. In Amhara region, Fano and other irregular militias fought with the Amhara regional government against the TPLF, gaining arms and training. Despite this alliance, government attempts to disarm the Fano has led to violent clashes. Informal militias from Amhara region are active in many areas of contested territories – including in Western Tigray zone, in Metekel zone of Benshangul/Gumuz, and recently in Oromia region.

While clashes thus far have been short and sporadic, escalated fighting between formal and informal forces from Amhara and Oromia regions is likely should political solutions not be found. The presence of informal forces complicates any political solution as they operate outside of government control. Given these dynamics, it is likely that fighting in contested locations between the regions will continue to occur at regular intervals over the next few months.