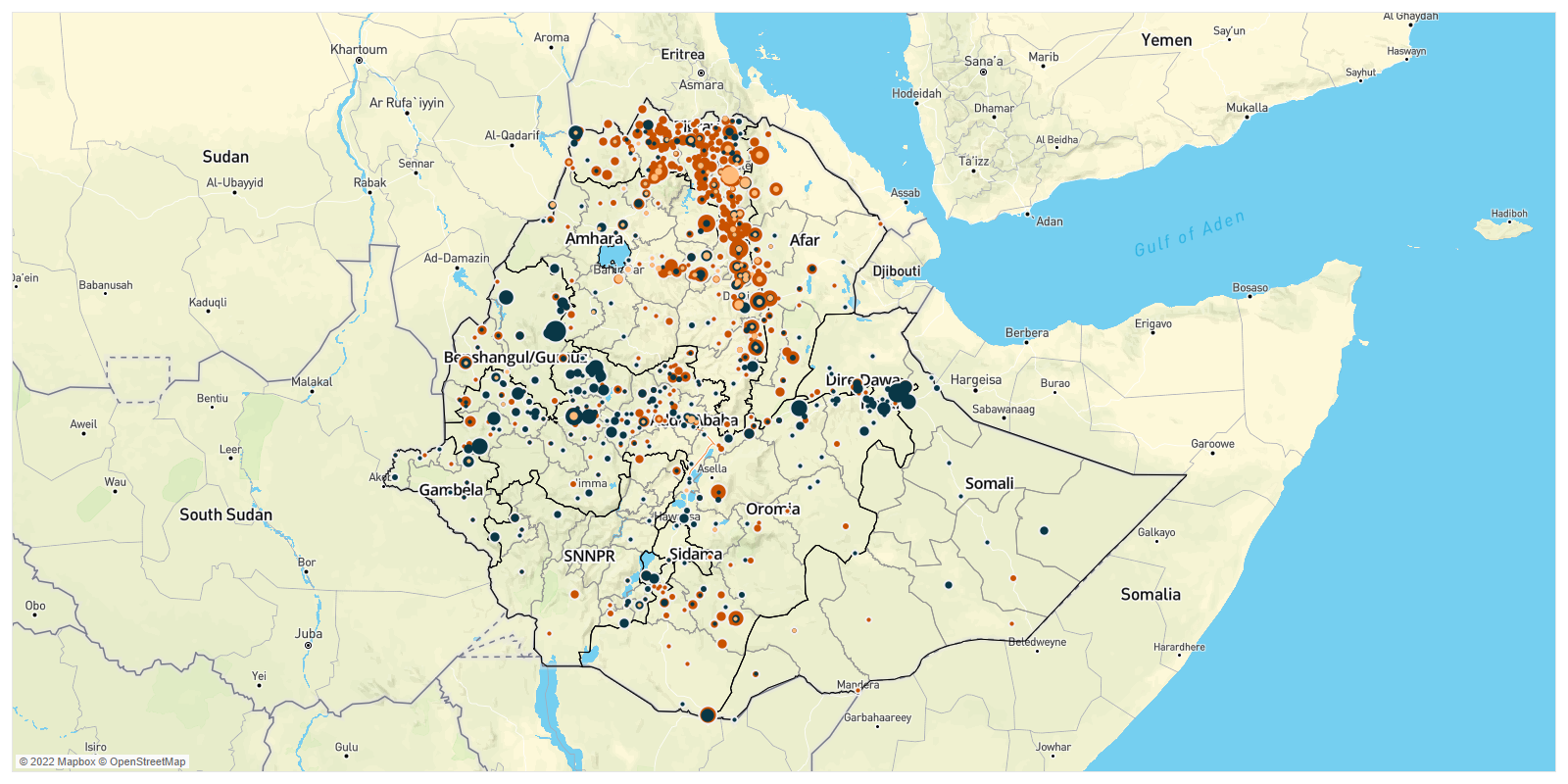 By the Numbers: Ethiopia, 2-8 April 2022 2Some events from this coverage period might be included in the data in subsequent weeks due to reporting delays. 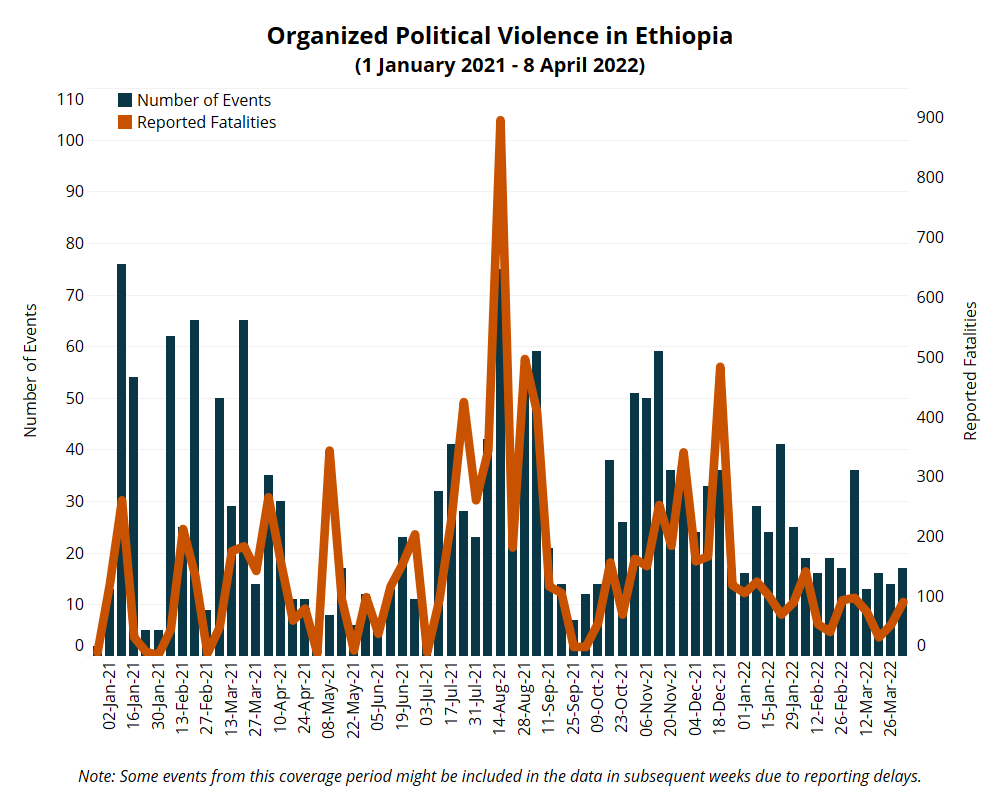 Armed clashes between government forces and the Oromo Liberation Front (OLF)-Shane continued in Oromia region, with 10 armed clash events reported last week (see map below). The Oromia regional government announced a new joint “operation” with the federal government against the OLF-Shane (EBC, 9 April 2022; DW Amharic, 11 April 2022). On 2 and 3 April, the OLF-Shane clashed with Ethiopian National Defense Force (ENDF) and Oromia regional special forces on a highway connecting Ethiopia to Kenya, near Moyale town in Borana zone. On 6 and 7 April, the two sides clashed in Sibu Sire woreda in East Wollega zone, Degem woreda in North Shewa zone, and Guliso woreda in West Wollega zone. The OLF-Shane claimed to have killed 45 members of government forces in Degem woreda (OMN, 8 April 2022). This claim could not be independently confirmed. On 8 April, these groups clashed in Chitu kebele in Wenchi woreda and Dale kebele in Ameya woreda in South West Shewa zone. 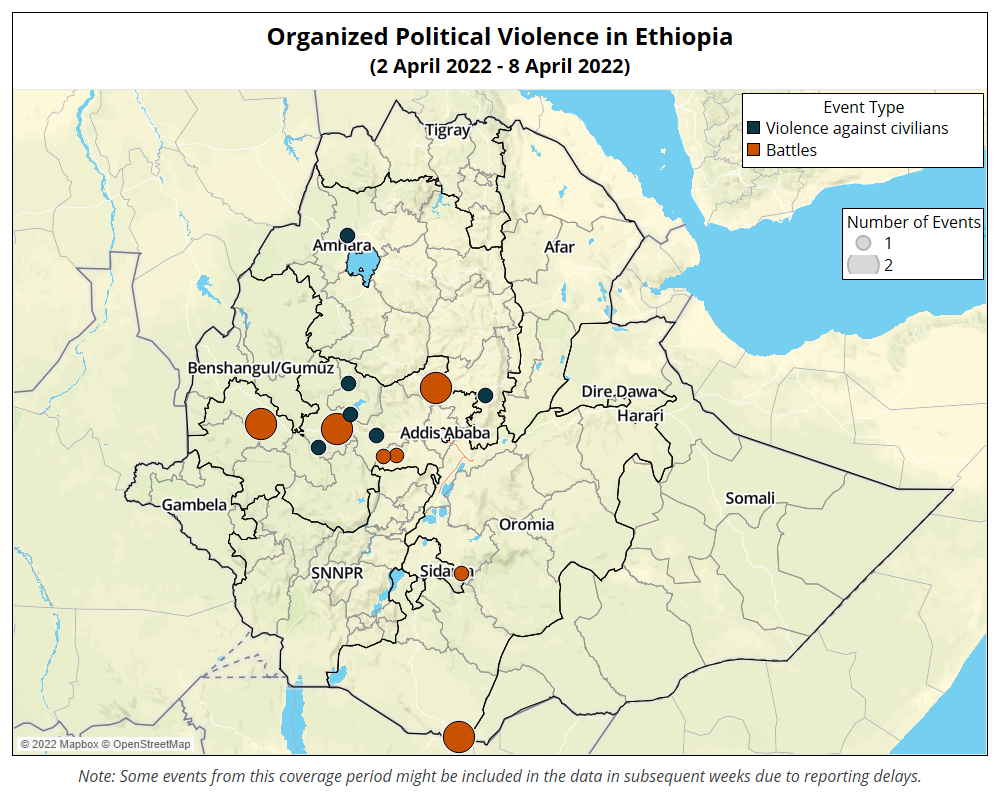 Attacks against civilians by different actors also continued in Oromia region. On 2 April, Amhara ethnic militias killed four members of one family and burnt several homes of farmers in Digalu rural village in Jarte Jardega woreda in Horo Guduru Wollega zone. On the same day, OLF-Shane members killed the chairman of Jimma Arjo Abbaa Gadaas (traditional elders), an ethnic Oromo, in Jima Arjo in East Wollega zone after abducting him from his home. On 4 April, members of Oromia regional special forces shot and killed three civilians who were detained in Darimu and Aboro prisons in Bile Malima kebele in Liban Jawi woreda in West Shewa zone. The victims had been arrested on suspicion of being OLF-Shane members. The next day, members of the federal police shot and killed three civilians in Adileka Tuluchabi in Jimma Genete woreda in Horo Guduru Wollega zone for an unknown reason. On 5 April, residents of Beltu town gathered to protest against “electric power disruption in their town” in Lege Hida woreda in East Bale zone. Oromia regional special forces opened fire and beat protesters to disperse their gathering. An identified number of protesters were injured and over 30 people, accused of organizing the protest, were arrested.

Furthermore, intercommunal violence between Oromo and Sidama communities erupted on 3 April in Halela and Sucha kebeles in Chiri woreda in Sidama region and Shambel and Wero kebeles in West Arsi zone in Oromia region, resulting in five people getting killed and 15 others injured. The clashes occurred after an unidentified armed group killed a local Sidama elder in Halela kebele in Chiri woreda in Sidama region.

In Amhara region, the OLF-Shane killed eight members of one family, abducted an unidentified number of children, and burned and looted houses in Meneyo and Dire kebeles in Dera woreda in North Shewa zone. In addition, Amhara regional special forces and Amhara ethnic militias shot and killed four Welkait ethnic group members, including two brothers, while they were farming in Tembera Kiwa village in Chilga 1 woreda in Central Gondar zone. On 2 April, six unidentified gunmen entered a UN camp hosting Eritrean refugees in Dabat town in North Gondar zone, injuring eight after shooting at refugees (BBC Amharic, 10 April 2022). The reason behind the attack is unknown.

Last week, several demonstrations related to religion and disputes over requests for different administration levels were held in different parts of the country. On 3 April, members of youth groups, who identified themselves as Ethiopian Orthodox Christians, smashed windows and furniture of a Mekane Eyesus Church (Pentecostal church) and attacked worshippers after accusing them of “sound pollution” and over disagreements about the ownership of a place of worship in Kora in Akaki woreda in Finfine special zone in Oromia. Oromia regional special forces intervened to stabilize the situation. As a result of the riot, one person was killed while several others were injured. There is also tension in Gelan town in Akaki woreda due to disagreement between local authorities and a group of Orthodox believers who claim to have found a religious artifact in Chefetuma kebele, administered under Gelan town (BBC Amharic, 8 April 2022). According to the administration officials, the area is reserved for a government project. However, the group is asking the local authorities to preserve the area for their use. Local administrators have asked the group to move the artifact to a nearby Orthodox church, which they refuse to do and are still occupying the area where the artifact was found. In Addis Ababa, Muslim students held protests against “government interference into religious matters” on 8 April after they accused schools of preventing students from holding prayers and other religious activities on school premises (Addis Standard, 8 April 2022). On 12 April, reports indicating permission for Muslim students to perform noon prayers outside the school emerged (BBC Amharic, 12 April 2022).

In Southern Nations, Nationalities and Peoples Region (SNNPR), on 6 April, a group of Ari ethnic group members, demanding to establish a zonal administration for Ari ethnic group, attacked civilians and burned some houses in Konta woreda in Omo zone. An unidentified number of people were injured during the incident. Some residents speculated that the reason behind the violence might be due to the fact that the Omo zone council failed to put demands by the Ari ethnic group as an agenda item for discussion during its last week’s session. The zone administration officials apologized for this mistake and tried to calm the situation by trying to hold discussions with the community (Tikvah-Family, 10 April 2022). However, the violence continued over the weekend in and around Jinka, Tolta, and Maytser towns.3These events will be coded and included in the next week’s data per ACLED methodology. As a result, a curfew was declared on 10 April and the ENDF and federal police were called to control the violence (Bisrat Radio, 11 April 2022). Over 130 people including four police officers were arrested under suspicion of participating in the violence (Tikvah-Ethiopia, 11 April 2022). On 7 April, members of the Mareko ethnic group from Gurage zone held a peaceful demonstration in front of the SNNPR president’s office in Hawasa city in Sidama region and demanded that Mareko woreda be recognized as a special woreda, separated from Gurage zone. They also demanded the demarcation of nine kebeles bordering Mareko and Mesken woredas. Previously, violent clashes due to border disputes were recorded in these two woredas, with traditional conflict resolution methods used to resolve the disputes (EBC, 12 April 2022).

Weekly Focus: Western Tigray zone: A Thorn in the Way of Peace?

One of the most difficult issues standing as a barrier to peace in Ethiopia’s northern conflict has been the status of Western Tigray zone. Ethnic Amhara residents of the zone, living under TPLF rule for decades, have been demanding to be governed by their co-ethnics, complaining of discrimination and harsh treatment under ethnic Tigrayan authorities. Even before the conflict between the TPLF and government erupted in November 2020, ethnic violence in Western Tigray was frequently reported, as the ‘ownership’ over the area has long been disputed.

At the outbreak of the conflict in 2020, formal and informal militias from Amhara region quickly seized control of Western Tigray zone, setting up an interim administration to govern the area as a part of Amhara regional state. Ethnic Tigrayans were presumed to have sided with the TPLF and faced heavy discrimination under their rule (for more details on the conflict in Western Tigray zone, see EPO’s Tigray Conflict Profile page).

Last week, Amnesty International and Human Rights Watch released a joint report denouncing what they labeled “crimes against humanity” in Western Tigray zone. In the report, the organizations relied on interviews with nearly 400 people, detailing instances of abuse against ethnic Tigrayan civilians that took place during the initial offensive (early November 2020), the following seven-month period (November 2020-June 2021), and a third period from June to December 2021 (Amnesty International, 5 April 2022). The findings echoed allegations made earlier by the US government, which accused Amhara forces in Western Tigray zone of “a systematic campaign of ethnic cleansing” (VOA, 28 February 2021).

The regional government of Tigray led by the TPLF welcomed the findings of the joint report and called on the international community to take actions to compel the Ethiopian government to allow an independent investigation by the International Commission of Human Rights Experts on Ethiopia established by the UN Human Rights Council (Tigray External Affairs Office, 8 April 2022). The government of Amhara region, on the other hand, denounced the report, calling its findings “biased” and “far-reaching unsubstantiated conclusions” (Amhara Media Corporation, 11 April 2022). The government of Ethiopia expressed concern that the report assigned blame “disproportionally” and questioned the way it addressed sensitive internal political matters (FDRE Government Communication Service, 6 April 2022). The release of the Amnesty International/Human Rights Watch joint report follows another report, written by the researchers at the University of Gondar (in Amhara region), detailing the discovery of mass graves, allegedly of ethnic Amharas, who had been killed by the TPLF during their control of the area. The report accuses the TPLF of committing genocide against ethnic Amharas in Western Tigray zone – which it refers to as “Wolkait, Tegede, Telemt” (Amhara Media Corporation, 3 April 2022).

The political nature of Western Tigray zone complicates any efforts to uncover abuses, which have been perpetrated by all parties to the conflict in the zone. Indeed, the territory of the zone west of the Tekeze river poses “the thorniest obstacle” to sustainable peace (Al Jazeera, 12 April 2022). For the federal government, negotiation with the TPLF over Western Tigray zone could risk upsetting its allies in Amhara region (see EPO Monthly: February 2022 to understand the political complexity of negotiation agendas for Tigray conflict). Indeed, so sensitive is this issue to the government that those who published rumors that the government was engaged in secret talks with the TPLF prior to its public acknowledgment were issued public warnings (Ethiopia Media Authority, 22 March 2022). Ethiopian federal forces are still recovering from a weakened state and have relied heavily on forces from Amhara region to contain the TPLF. Loss of this support would be disastrous for the federal government, and Ethiopia’s unity in general.

As a ceasefire between the TPLF and Ethiopian government continues throughout the next few weeks, the issue of contested territory in Western Tigray zone will be one of the most difficult points standing in the way of holding official talks. Resolving this issue necessitates addressing abuses that have been committed by all sides and reaching an agreement that involves both higher officials and local violent actors. Until this issue is addressed properly, conflict is likely to continue in the area.