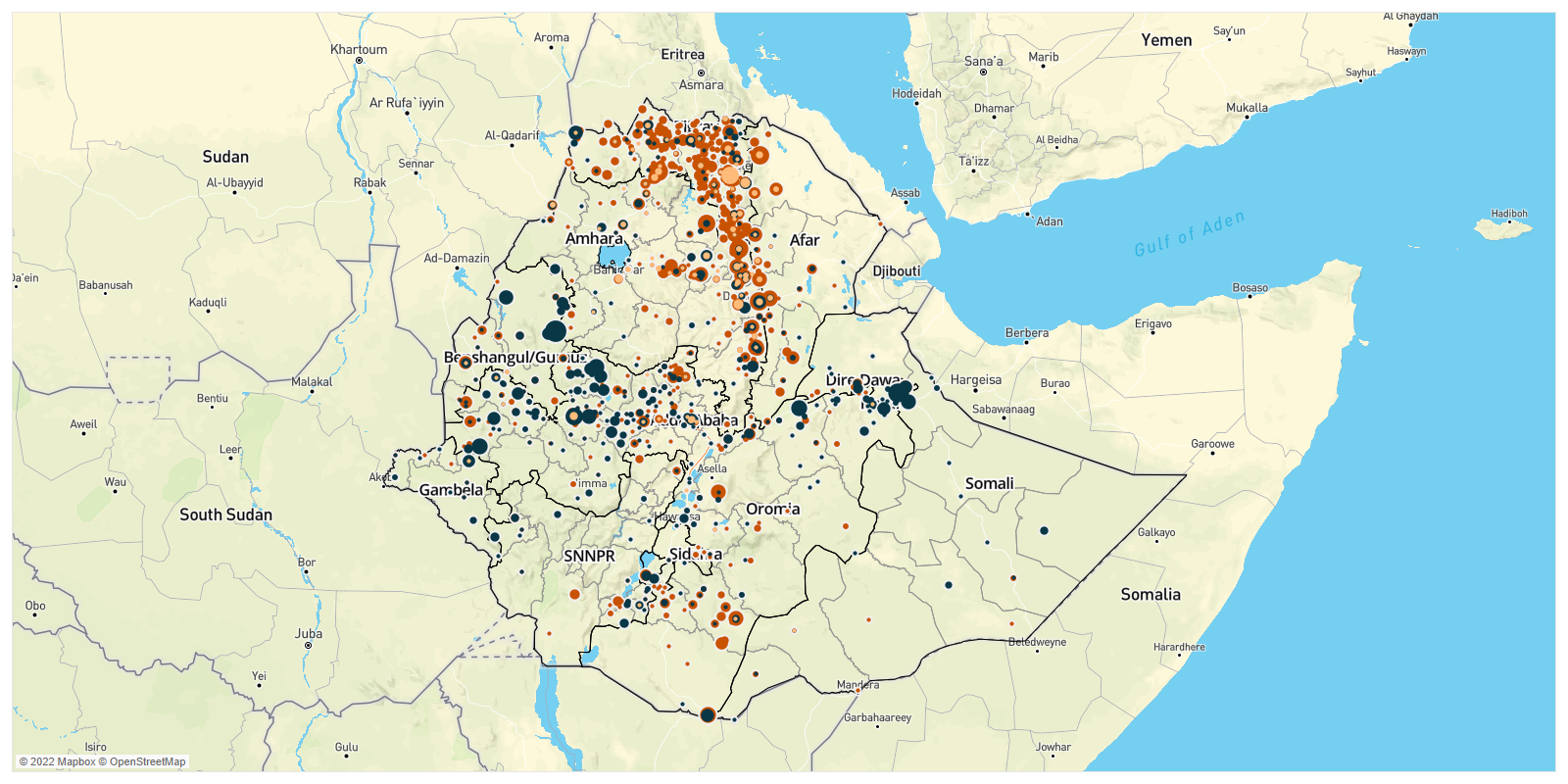 By the Numbers: Ethiopia, 4-10 June 2022 2Some events from this coverage period might be included in the data in subsequent weeks due to reporting delays. 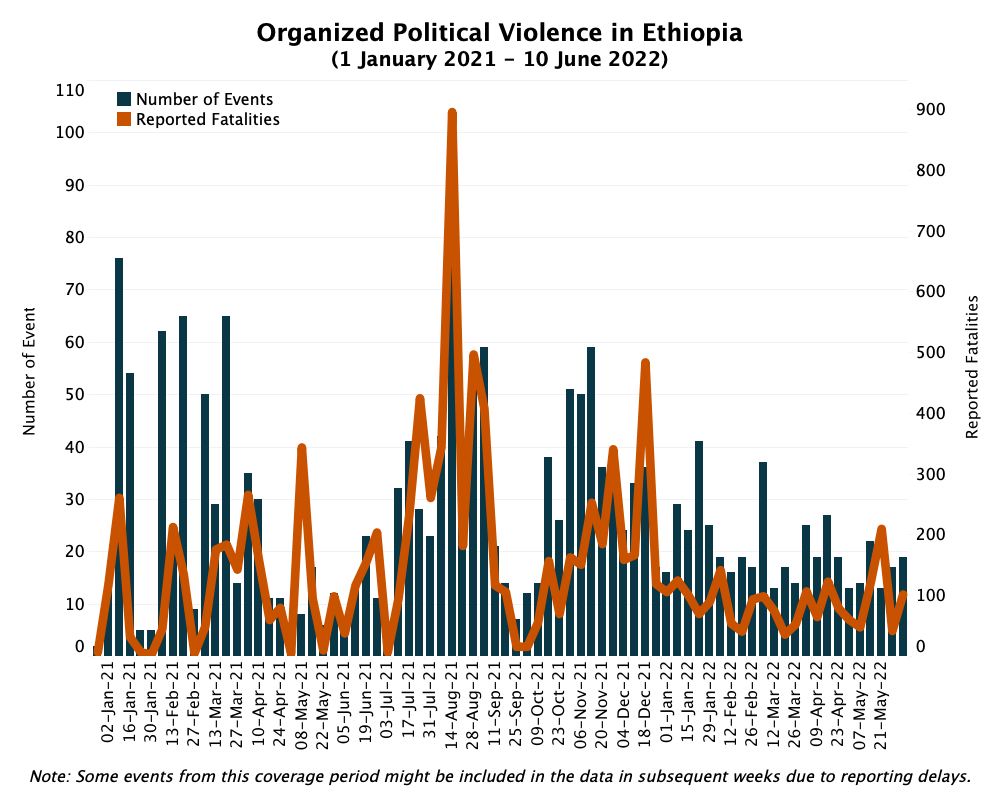 Armed clashes between Oromo Liberation Front (OLF)-Shane and government forces continued in Oromia region. Last week, five armed clash events between these actors were recorded. All these armed clashes occurred in Guji zone. In this zone, the two parties clashed in Mormora kebele in Gora Adola woreda, Abulo kebele in Adola woreda, Wadara town in Wadara woreda, and Melka Guba kebele in Gumi Ildalo woreda. Meanwhile, last week, the Ethiopian National Defense Force (ENDF) announced that it had conducted a military operation against OLF-Shane rebels in Likiti kebele in Gudetu Kondole woreda in West Wollega zone. The ENDF claimed to have fully liberated the village following the fighting that resulted in killing eight OLF-Shane members and capturing 15 members of the group (FDRE Defense Force, 10 June 2022). Several weapons and properties of the group were also seized.

Last week, one armed clash event and two violence against civilians events involving Fano militias were also recorded in Oromia region. All these events occurred in Horo Guduru Wollega zone. On 6 June, Fano militias clashed with federal police forces in an unspecified location in the zone, resulting in an unknown number of fatalities, including among the members of the federal police. Clashes erupted after Fano militias refused the resettlement of internally displaced persons (IDPs) who had been previously displaced from the area. The same day, Fano militias attacked and killed an unknown number of farmers in Samo Ilamu, Cidhati, and Jamo Doba in Horo Guduru Wollega zone. The victims were IDPs who had recently returned to their primary residences. On 10 June, Fano militiamen reportedly opened gunfire at two kids who were herding their cattle in Makano kebele in Horo Guduru Wollega zone. The armed group raided their cattle after killing one of them and wounding the other.

In Amhara region, on 10 June, three students were injured due to the explosion of a heavy artillery shell left in the garbage at Silk Amba School around Michael Jerba area in Dessie town (Dessie City Administration Communication, 10 June 2022).

Afar ethnic militia members and local security forces continued to clash in Argoba special woreda in Amhara region on 4 June (VOA Amharic, 4 June 2022). The two conflicting parties began to engage in armed clashes on 2 June when Afar ethnic militia started to attack civilians in Worku Addis area in the woreda. This occurred following the killing of an ethnic Afar civilian by an unidentified person while he was returning from the Medina marketplace in Argoba special woreda on 31 May (see EPO Weekly: 28 May-3 June 2022).

On 4 June, ethnic Burji rioters beat to death nine ethnic Oromos from Guji zone and injured 21 others at Soyama town market in Burji special woreda in Southern Nations, Nationalities and Peoples region (SNNPR). The victims were from Suro Bargudah woreda in Guji zone in Oromia region who had traveled to the area to sell and buy items at the market. This attack was conducted after a rumor circulated that an ethnic Burji person was killed by ethnic Oromos from Guji zone at an unidentified kebele. However, according to officials, he was allegedly killed by the OLF-Shane (DW Amharic, 6 June 2022). Two days later, on 6 June, members of the Burji ethnic group gathered in protest in Soyama town and denounced the killing of Oromo civilians in their town. A similar protest was held at Bule Hora University in Guji zone in Oromia region by ethnic Oromo students who also condemned the killings. 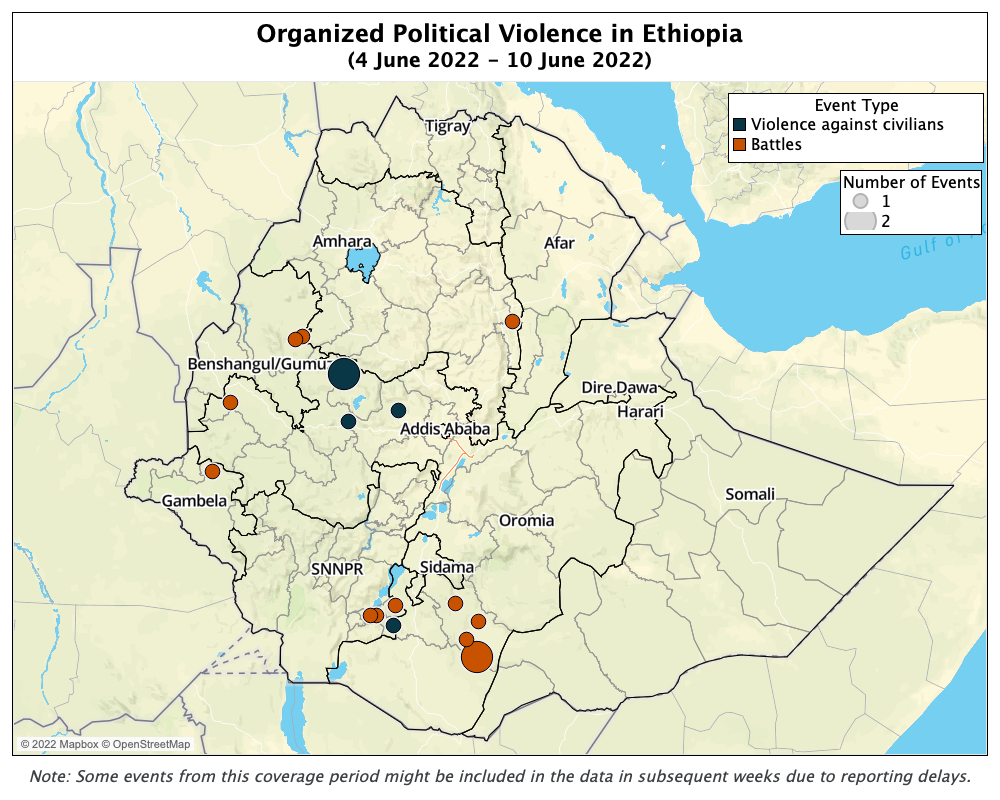 Last week, it was reported that the chairman of the Gumuz People’s Democratic Movement (GPDM) was arrested in Benshangul/Gumuz region after the GPDM was accused of conspiring to initiate unrest in Kamashi zone. On 1 June, members of the GPDM clashed with regional special forces in Soge town in Miziga woreda in Kamashi zone. The next day, regional special forces were besieged by GPDM militants in Kamashi town (see EPO Weekly: 28 May-3 June 2022 for more details on these events). The chairman of the GPDM party along with 300 others, including nine top leaders of the party, had been released from the Gilgel Beles prison in March 2022. The releases came shortly after the Kamashi zone administration officials and traditional elders sat for talks with the goal of bringing sustainable peace in the zone. Among other things, armed groups in the zone petitioned the government to release arrested individuals associated with their groups as part of a political solution to ongoing violence. Members of the GPDM also agreed to surrender and voice their demands peacefully. As a result, on 19 March, a traditional peace and reconciliation ceremony was held between the regional government and leaders of the GPDM – political and armed wings – in the zone (see EPO Weekly: 12-18 March 2022 for more details on the Kamashi traditional peace and reconciliation ceremony). However, tensions have increased in the past few weeks after some members of the GPDM reportedly refused to disarm following the traditional peace and reconciliation ceremony (Ethiopian Reporter, 5 June 2022; DW Amharic, 3 June 2022).

In the morning of 14 June 2022, fighting erupted in Gambela city as well as Gimbi and Dembi Dolo towns of western Oromia.3These events will be included in the data published next week as per ACLED methodology. According to the regional governments of Oromia and Gambela, the attacks were a coordinated effort by the OLF-Shane and GLF. As of Tuesday evening (in Ethiopia), fighting had concluded. According to the OLF-Shane – also known as the Oromo Liberation Army-OLA – spokesperson, the operation in Gambela had resulted in the capture of “weapons depots in the city” (Twitter @OdaaTarbiiWBOi, 14 June 2022). The Gambela regional government also announced that fighting in the city had subsided and that government forces were working to “eradicate the militant group” (Gambella Regional Gov’t Press Secretariat Office, 14 June 2022). Clashes in Dembi Dolo and Gimbi had also concluded after several hours of intense gunfire between the two armed groups and government security forces (BBC Amharic, 14 June 2022).

The most recent bout of fighting caught many by surprise. First, the clashes follow a two-month long effort by the government to reduce the capacity of the OLF-Shane, which they claim to have accomplished (Office of the Prime Minister – Ethiopia, 14 June 2022). According to the Oromia regional government, the OLF-Shane was “no longer a national threat” (Ethiopia Brodcasting Corporation, 22 May 2022). Secondly, the GLF had not been active in violent conflict previously, and Gambela region has been a relatively peaceful region overall.

Despite this effort, the most recent armed clashes in Dembi Dolo, Gimbi, and Gambela prove that the OLF-Shane remains a serious threat to the government and that recent military operations have not succeeded in reducing their capacity. In addition, this most recent operation in Gambela and the two towns in Oromia is the first major “joint” operation by the two rebel groups, although there had been several meetings and coordinated trainings held between them in the past (OLA Communique, 31 October 2021).

The GLF is a relatively new organization that was founded in October 2021 after the 2021 Ethiopian national elections. Citing electoral “irregularities and malpractices,” the group armed itself and announced it was dedicated to overthrowing the Gambela regional government (Ethiopia Autonomous Media, 31 October 2021). The group, like others in the United Front of Ethiopian Federalist and Confederalist Forces anti-government alliance, has ‘franchise’ organizational issues. Shortly after the signing into the alliance in Washington, DC, the GLF put out an announcement claiming that the representative who signed the agreement on behalf of the front was not even a member of the GLF (Gambella Liberation Front/Army, 16 November 2021). Coordinated attacks on the capital of the region this week could indicate that these franchise issues have been resolved.

While the government has officially announced its intention to negotiate with the Tigray People’s Liberation Front (TPLF) by forming a negotiation committee, no such negotiation plans have been put forth with other militant organizations in the country (Office of the Prime Minister – Ethiopia, 14 June 2022). Neither the OLF-Shane nor the GLF have been ruled out of participating in the national dialogue. However, the initial processes indicate that they would likely not be included. This latest round of violence could indicate that they are attempting to secure a place at a future negotiation table. Members of the National Dialogue Commission were in Gambela last week (Gambella Regional Gov’t Press Secretariat Office, 10 June 2022). As the national dialogue moves closer and talks with the TPLF are planned, the government will need to give these smaller anti-government organizations more consideration.