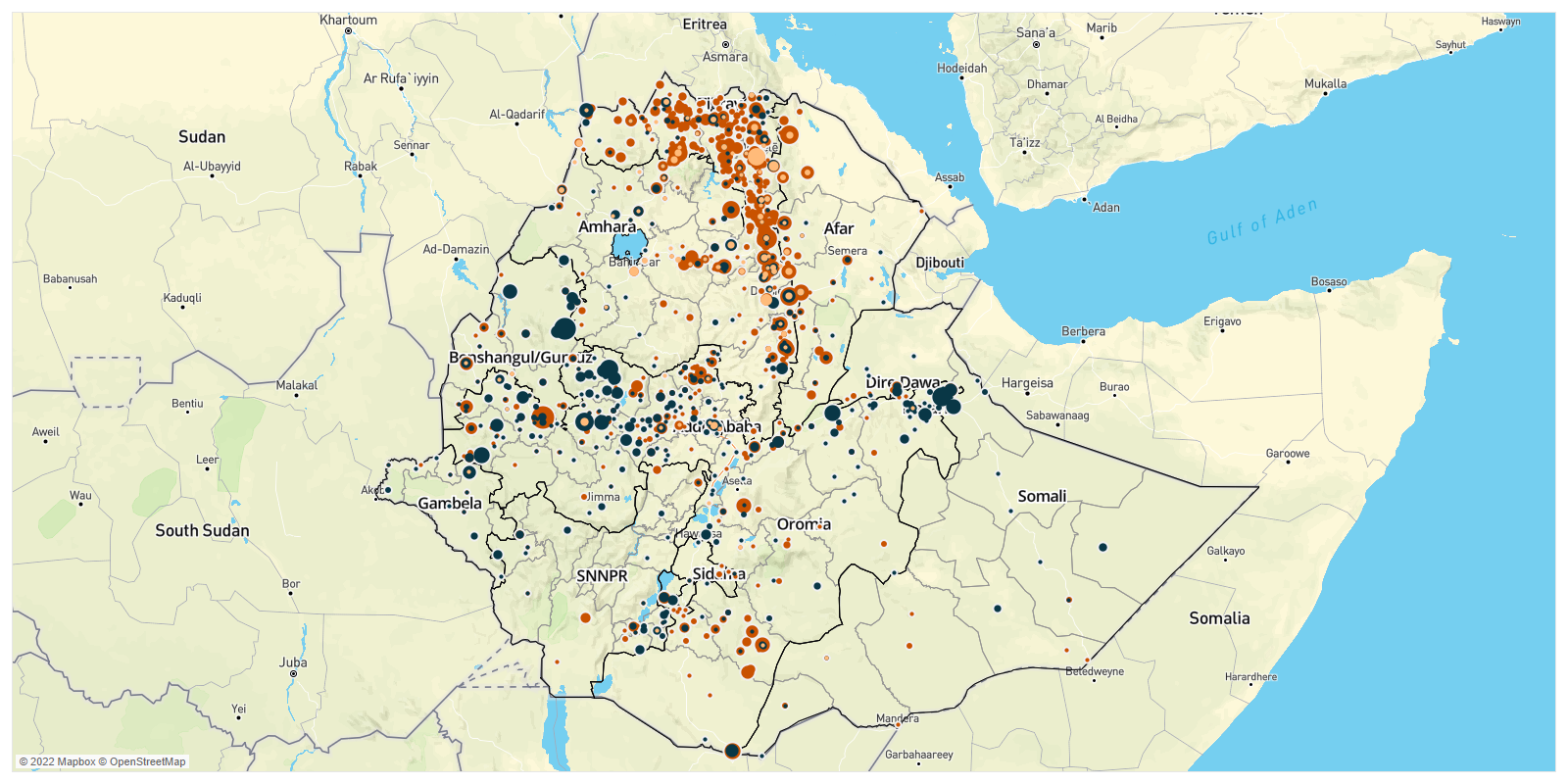 By the Numbers: Ethiopia, 30 July-5 August 20222Some events from this coverage period might be included in the data in subsequent weeks due to reporting delays. 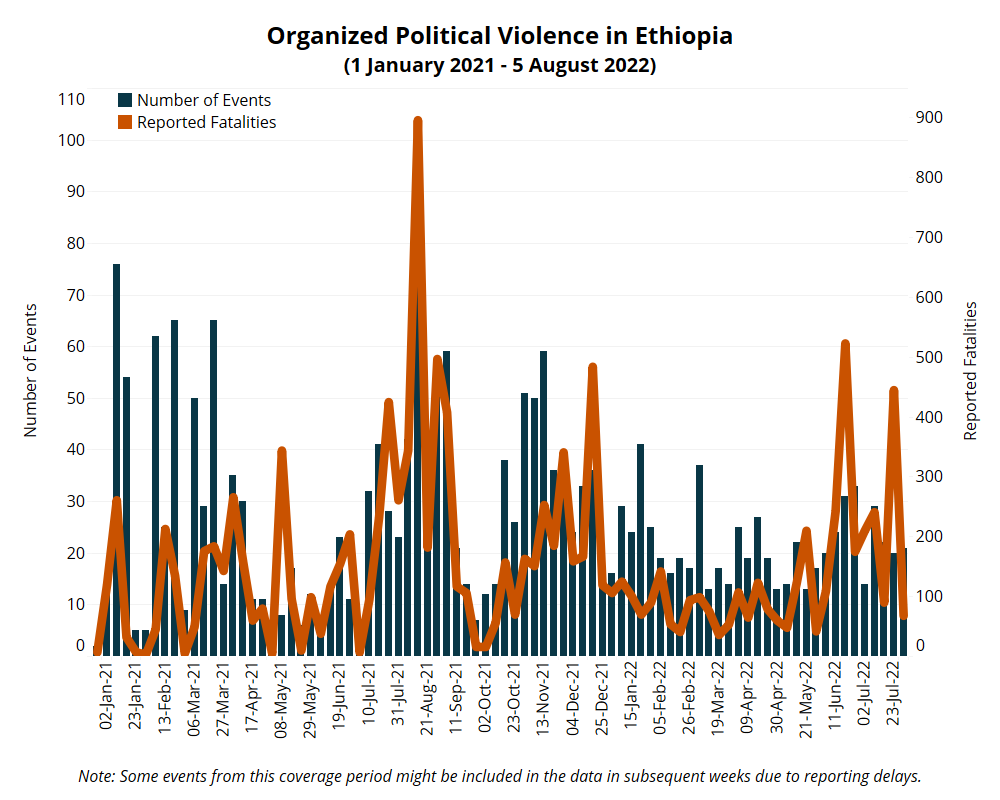 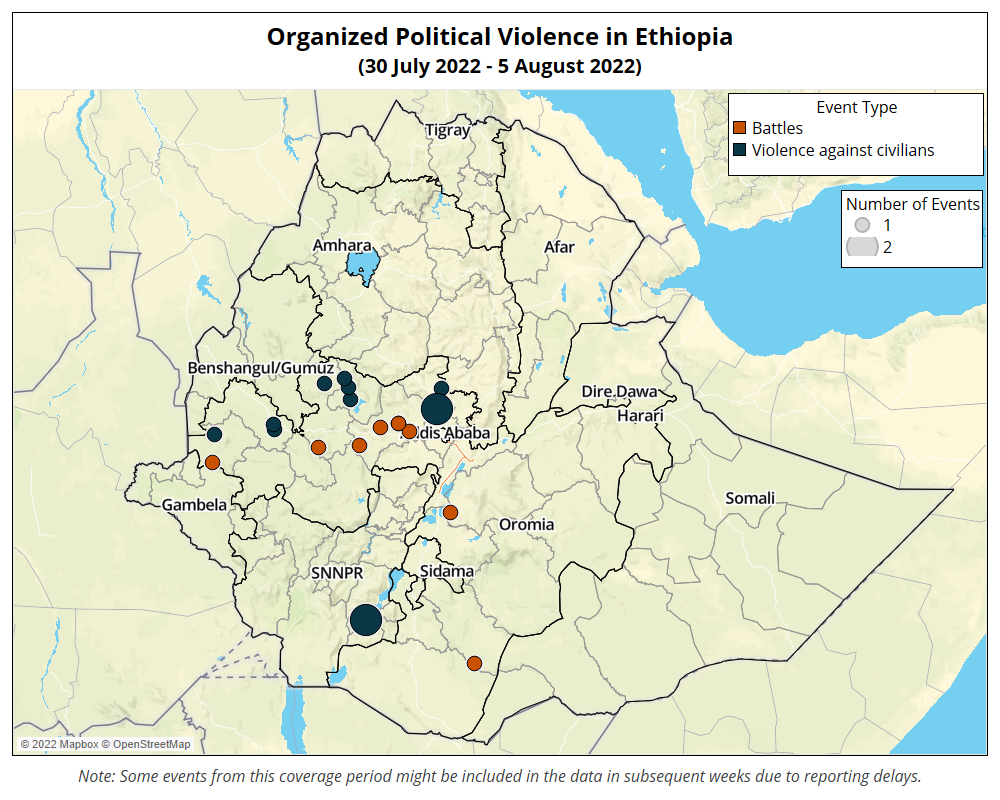 In Southern Nations, Nationalities and Peoples region (SNNPR), government forces, presumably ENDF and SNNP regional special forces, raided homes and reportedly killed eight people in Ataye kebele in Derashe special woreda. The regional police commissioner, however, claimed that security forces exchanged gunfire with an unidentified armed group, killing four gunmen and capturing around 20 others accused of inciting violence (VOA Amharic, 2 August 2022). Derashe special woreda has been the site of recurring political unrest since April 2022 in connection with conflicts over its administration with the neighboring Konso zone, and its local council members recently voted to have it restructured as part of a new regional state (Addis Standard, 2 August 2022).

Lastly, it was reported that non-Oromo students organized and beat Oromo students in the University of Bonga in Bonga town in Kefa zone in South West Ethiopia Peoples region.

Peace talks between the Tigray People’s Liberation Front (TPLF) and the Ethiopian federal government have reached a stalling point again, delaying a critical start in negotiations. Last week, the AU Political Affairs, Peace and Security (PAPS) reached an agreement to accommodate the UN, EU, and US to be part of the AU’s team responsible for brokering peace between the warring parties (The Reporter, 6 August 2022). According to an article published by Addis Standard, this agreement was likely in response to a request by the TPLF that negotiations take place in Kenya with the support of international partners, including the UAE, US, EU, UN, and AU (Addis Standard, 3 August 2022). US and EU special envoys made a joint visit to Mekele last week to “encourage the launch of talks” between the government and TPLF (U.S. Embassy Addis, 2 August 2022).

Federal government officials, who want the talks to be facilitated exclusively by the AU, have expressed opposition to the new arrangement and accused US and EU officials of “failing to press for unequivocal commitment for peace talks” (Twitter @RedwanHussien, 4 August 2022). The government likewise accused the international community of unjustly placing blame on the federal government for blocking aid, which it says is unhindered. TPLF authorities claim that Tigray’s “entire population is under blockade” (Twitter @reda_getachew, 6 August 2022).

The TPLF has released a reiteration of its preconditions, including a refusal to negotiate on the status of the Tigrayan armed forces and insisting that banking and communication services be restored prior to the beginning of the negotiations (DW Amharic, 7 August 2022). A full list of the TPLF’s previously-released preconditions were analyzed in the EPO Weekly: 3-9 July 2021 report. Last week, US and EU envoys returned from Mekele carrying a letter from the Tigray Regional President, Debretsion Gebremichael, guaranteeing the security of crews working to re-establish services (U.S. Embassy Addis, 2 August 2022).

Although negotiations are halted, fighting is unlikely to resume anytime soon as both parties have committed themselves to a peaceful solution to the conflict. Moreover, both sides incurred heavy costs fighting for over a year and a half, incentivizing the exploration of more peaceful routes. Yet, major obstacles remain, including the status of Western Tigray zone, which is currently administered by authorities from Amhara region. Unless solutions are found that satisfy both sides, conflict may return.