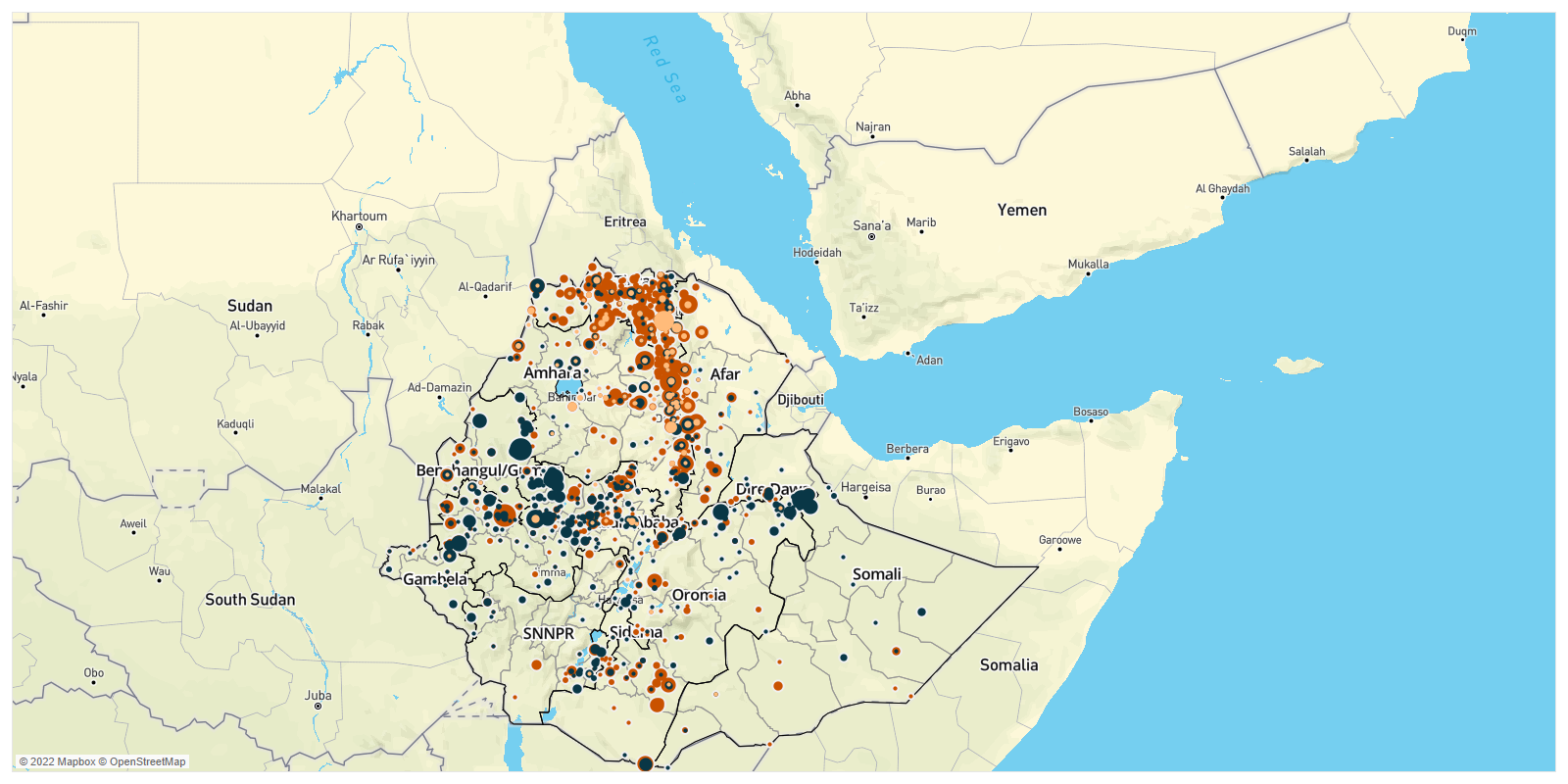 By the Numbers: Ethiopia, 10-16 September 20222Some events from this coverage period might be included in the data in subsequent weeks due to reporting delays. 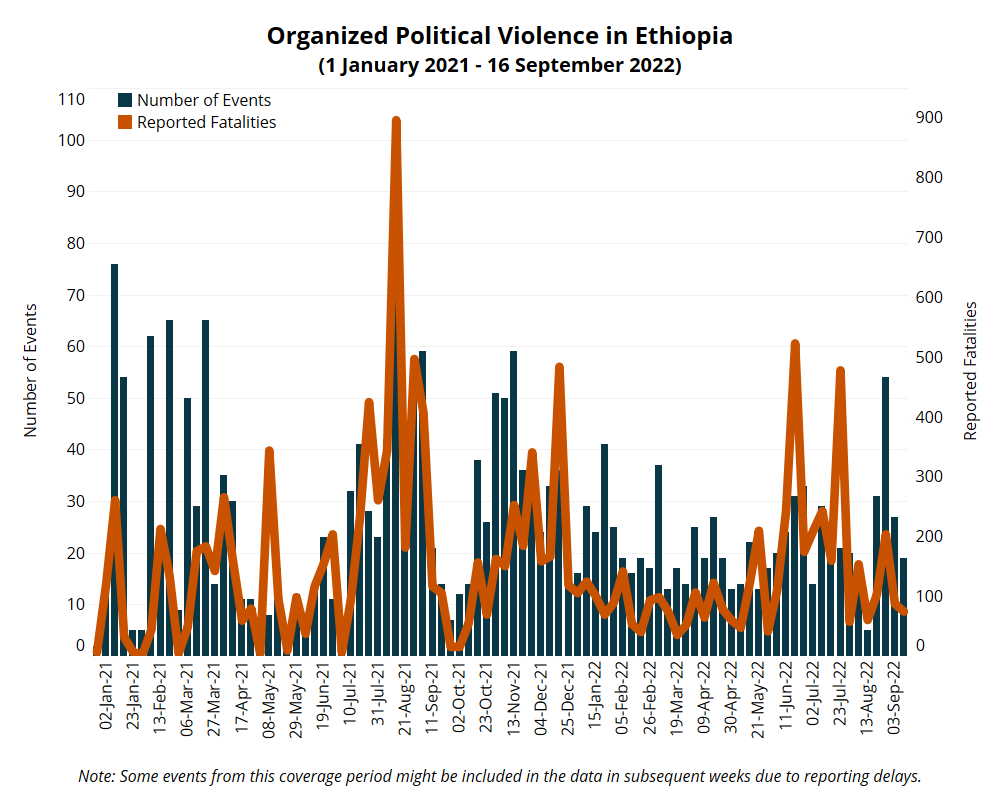 During the first week of the new Ethiopian year, armed clashes between government forces and Tigray People’s Liberation Front (TPLF) forces continued in northern Ethiopia. However, the rest of the country was relatively calm, with a low number of political disorder events reported.

On Ethiopian New Year, 11 September, the TPLF accepted the African Union (AU)-led peace negotiations with the federal government (Twitter @TigrayEAO, 11 September 2022). Previously, the TPLF had put forward a list of preconditions to be fulfilled by the federal government before sitting at the negotiation table (see EPO Weekly: 3-9 July 2021 for more details on the list of preconditions released by the TPLF). Moreover, the TPLF had previously rejected the government proposed peace negotiations led by the AU High Representative for the Horn of Africa, Olusegun Obasanjo (The Africa Report, 22 August 2022; Tigray TV, 18 August 2022).

Despite this development, armed clashes continued: from 11 to 14 September, TPLF forces and the Ethiopian National Defense Force (ENDF), Amhara regional special forces, and Amhara militias fought in Metema front in West Gondar zone in Amhara region. Qemant and Gumuz ethnic militias were reportedly involved in these armed clashes supporting TPLF forces. One report indicated that Sudanese forces were also assisting the TPLF. TPLF forces fighting from the Tumeta Medoka area in Sudan hindered the ENDF from crossing the border and clashing with TPLF forces (EMS, 14 September 2022). It remains unclear whether Ethiopian government-affiliated forces — Amhara regional forces, and Amhara and Fano militias — crossed the border into Sudan. 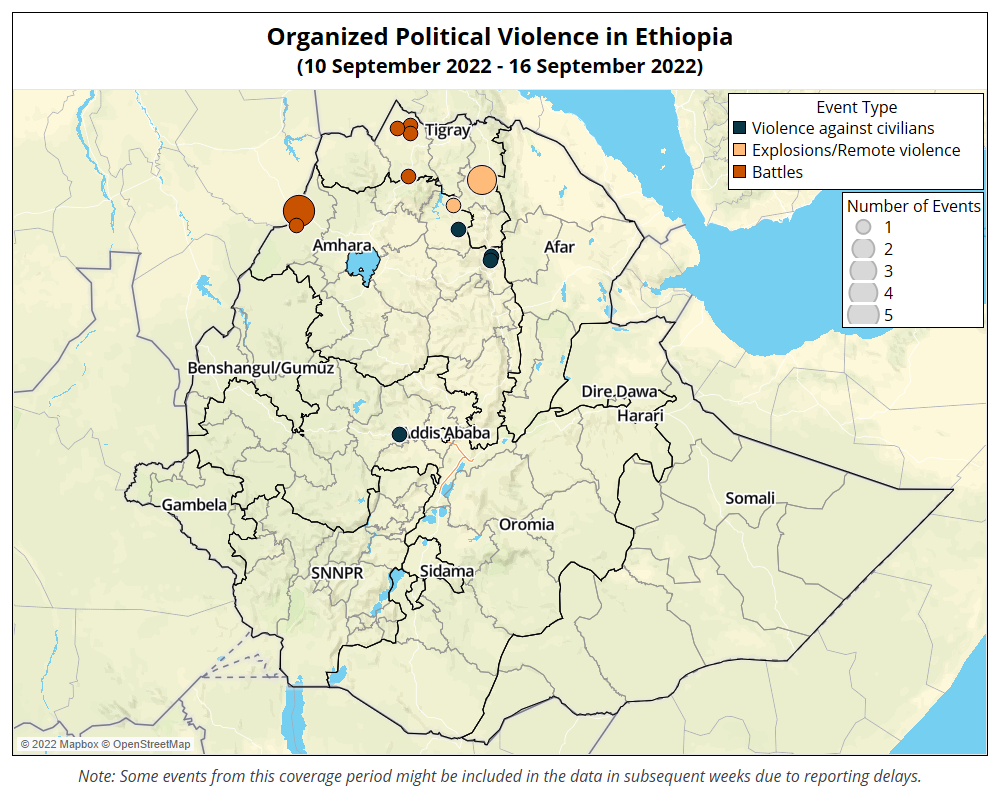 In Oromia region, a relatively low number of events were reported compared to the previous weeks. Last week, government security forces – assumed to be Oromia regional special forces – shot and killed a detained teacher in Meti, an area between Ginchi and Ambo in West Shewa zone. He was reportedly arrested “without any reason” while traveling by bus from Burayu to Jeldu on 9 September, and detained in Ginchi prison prior to the killing (OMN, 16 September 2022).