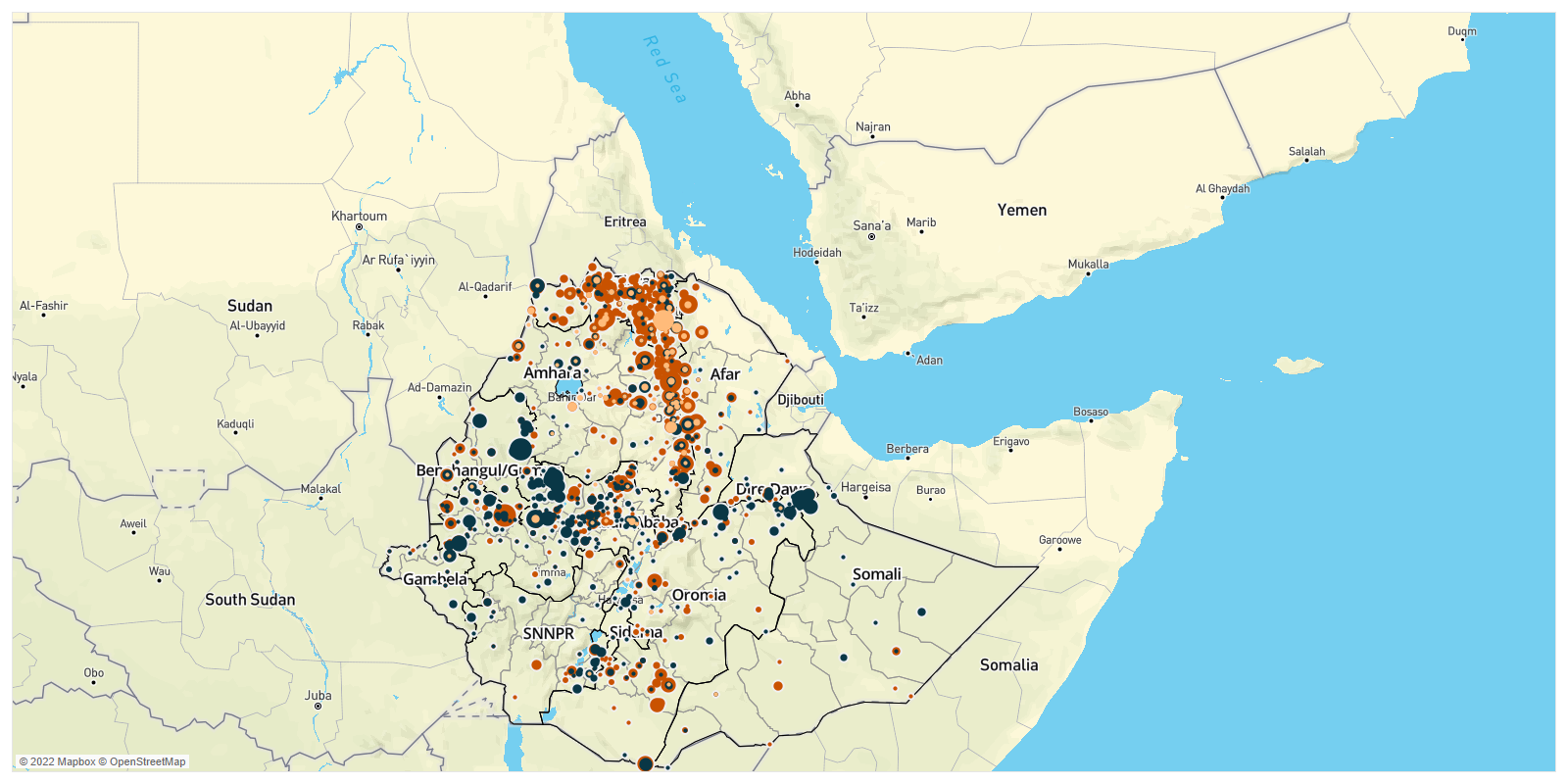 By the Numbers: Ethiopia, 17-23 September 20222Some events from this coverage period might be included in the data in subsequent weeks due to reporting delays. 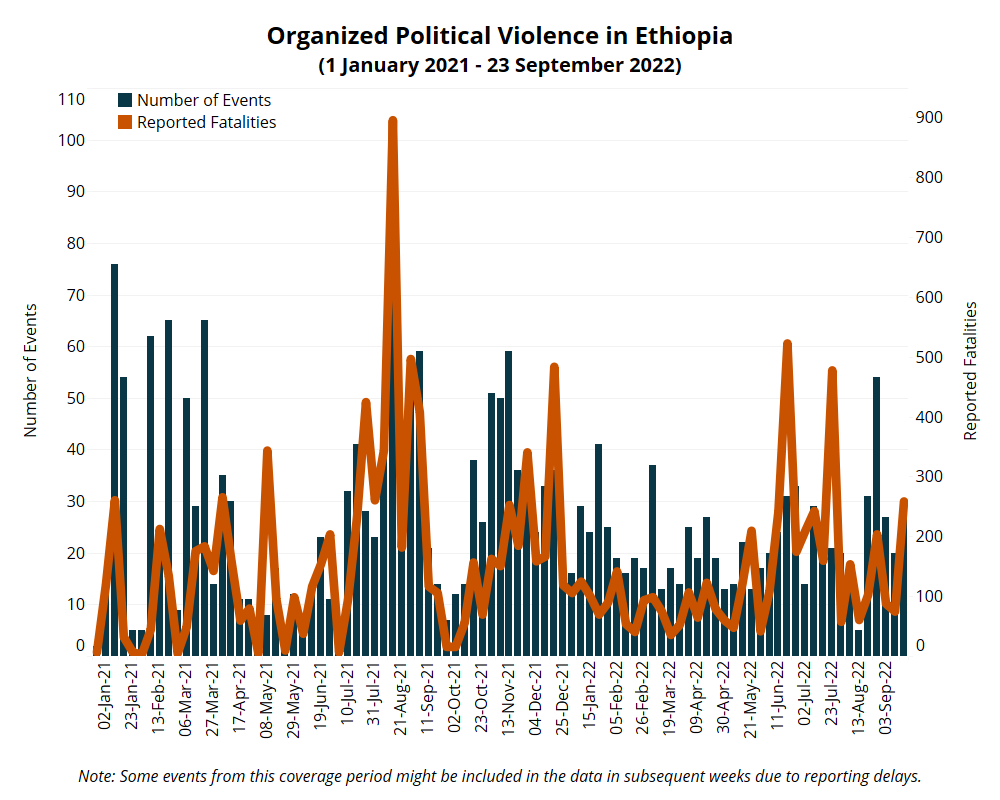 Armed clashes between Tigray People’s Liberation Front (TPLF) and government forces continued in northern Ethiopia last week. Five armed clash events were reported in Zela Ambesa in Eastern Tigray zone; close to Rama in Central Tigray zone; and in Ziban Gedena town, May Kuhili, and around Adi Awala in North Western Tigray zone in Tigray region. Clashes in all these places involved the Ethiopian National Defence Force (ENDF), the Eritrean Defence Forces (EDF), and TPLF forces. Reports indicate that Eritrea is mobilizing its armed forces and “reservists” under the age of 60 to fight in the conflict in northern Ethiopia (Reuters, 17 September 2022).

The Ethiopian government continues to restrict media reporting of the conflict in the country. A day before the new round of armed conflict erupted, the ENDF warned reporters against reporting the movements of its forces (FDRE Defense Force, 23 August 2022). It is therefore difficult, if not impossible, to verify reports on the northern conflict. The government released some details on the locations where fighting took place from 24 to 31 August but has not released any information recently. The TPLF, however, continues to release information on the locations of armed clashes and drone strikes by the ENDF, but as mentioned, it is challenging to triangulate and verify these reports. Both the government and the TPLF remain reticent to release information about their acts of conflict.

Similarly, attacks against civilians continued in Oromia region, with six events recorded last week: three of the six attacks were conducted by the OLF-Shane. On 20 September, an unidentified armed group – suspected to be the OLF-Shane – shot and killed the chairperson of Alge kebele in Fentale woreda in East Shewa zone. From 22 to 23 September, the OLF-Shane and kebele militias clashed in kebele 01 in Jardega Jarte town in Horo Guduru Wollega zone after the OLF-Shane began attacking civilians in the area. The government released a press statement indicating that the OLF-Shane attacked civilians and kebele militias in Horo Guduru Wollega zone after government forces killed one of the rebel group’s commanders on 23 September (FDRE Government Communication Service, 24 September 2022). The press statement, however, failed to provide more details. Typically, the government releases information on such events when the number of civilian fatalities is high. Thus far, no other detailed report has been released on these attacks, as all communication networks are reportedly down in this area (DW Amharic, 23 September 2022). The Ethiopian Human Rights Commission issued a statement this week indicating that in the past three weeks more than 100 civilians had been killed due to attacks by “the OLF-Shane, ethnic Amhara militias and individuals” in Amuru, Horo Bulk, and Jardega Jarte in Horo Guduru Wollega zone (Ethiopian Human Rights Commission, 26 September 2022).

OLF-Shane forces were also involved in events that occurred in Amhara and Southern Nations, Nationalities and Peoples regions (SNNPR). Last week, in Amhara region, the OLF-Shane clashed with Amhara regional special forces, Amhara regional state police, and ethnic Amhara militias in Burka, Warsamet, and Kara Daka areas in Dewa Harewa woreda in Oromia special zone. In SNNPR, on 18 September, members of the OLF-Shane opened gunfire on farmers looking after their cattle in Awranje kebele in Burji Special woreda, killing two farmers and injuring another. The group also killed around 30 cattle.

Further, in SNNPR, on 21 September, an unidentified armed group from West Guji in Oromia region — suspected to be the OLF-Shane – opened fire on civilians who were waiting for nine visiting members of the House of Representatives. These representatives were assigned to investigate identity-based attacks on members of the Kore ethnic group in Melka Oda village in Dorbale kebele in Amaro special woreda (DW Amharic, 22 September 2022). Due to this attack, five civilians were killed, while four others were injured. Members of the House of Representatives were forced to return to Addis Ababa following the attack.

Lastly, on the same day, an unidentified armed group from South Sudan opened fire from Maluwal Gaot area on the South Sudanese side of the border targeting a motorboat transporting civilians from Jakawo bridge to Metehar town on Baro river in Nuer zone in Gambela region. The armed group reportedly opened fire over disputes related to tax payments. One person was killed and seven others were injured as a result of this attack. Two more people were also reported missing.