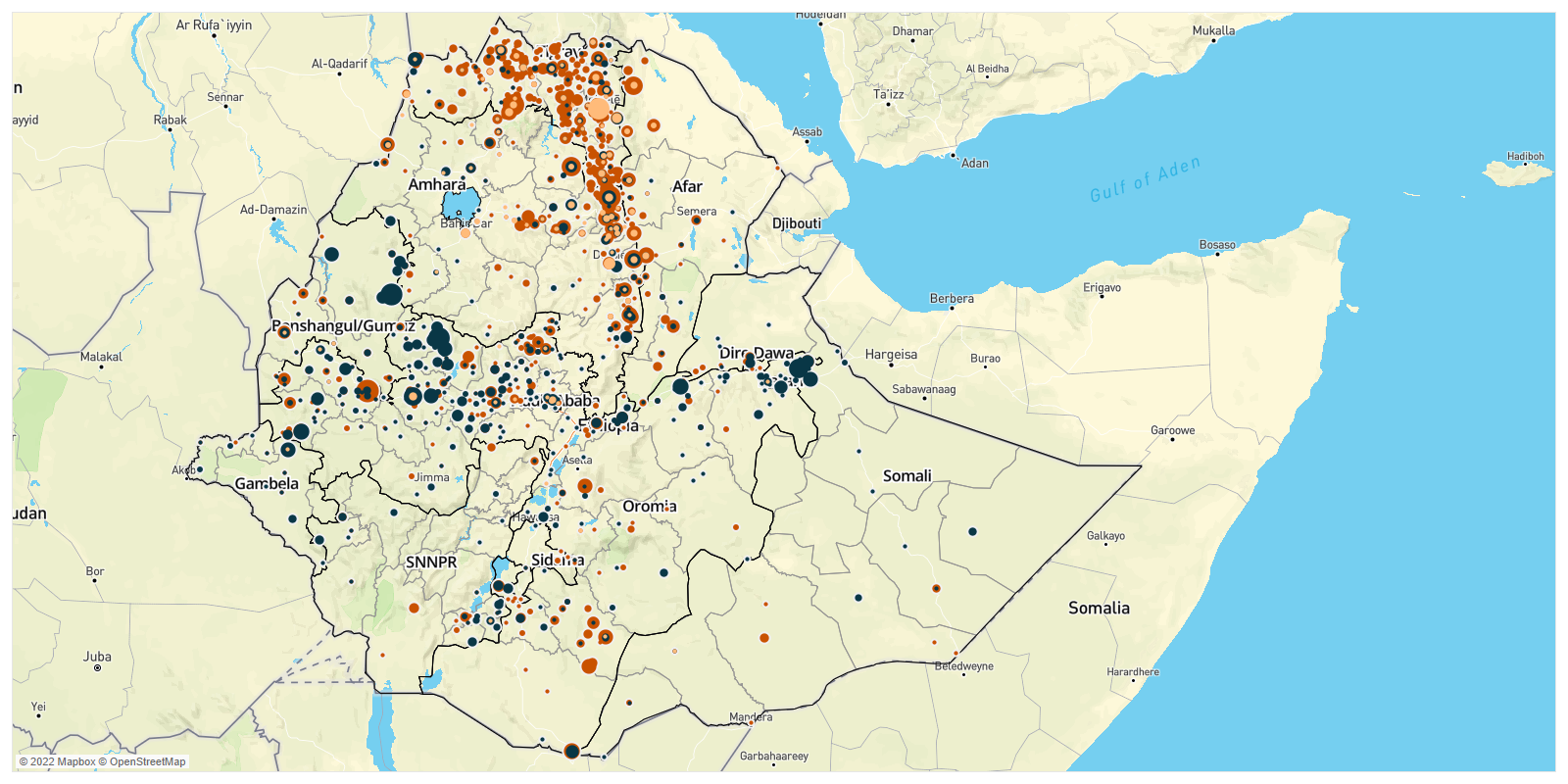 By the Numbers: Ethiopia, 8-14 October 20222Some events from this coverage period might be included in the data in subsequent weeks due to reporting delays. 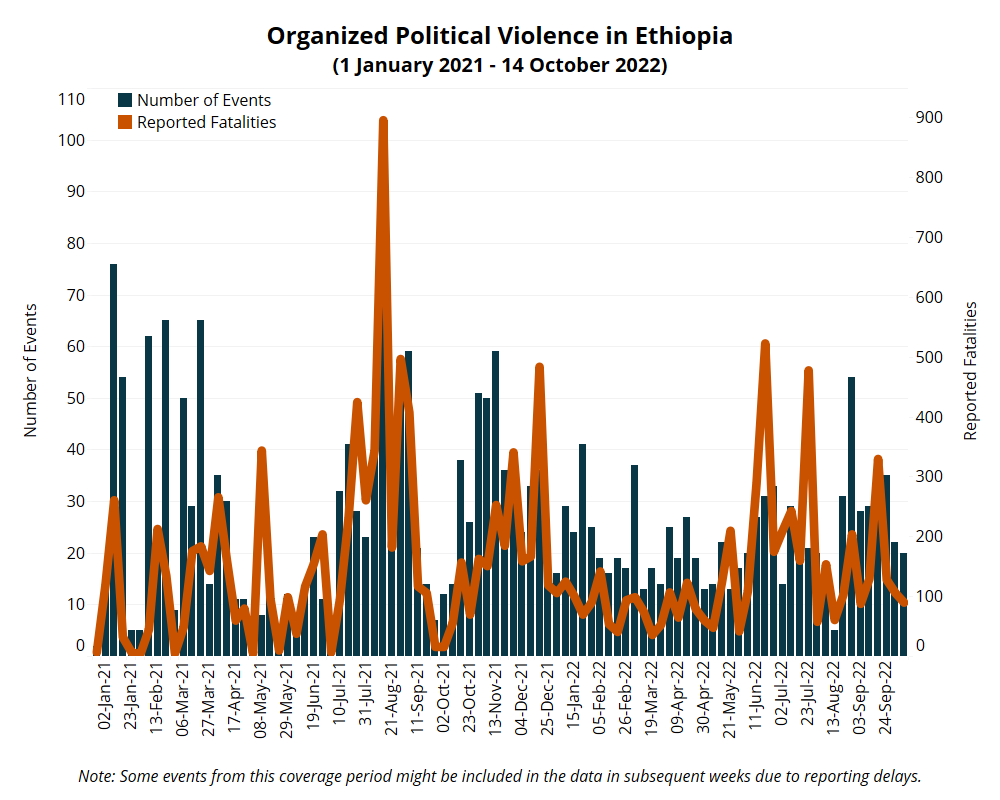 Last week, battles continued in Amhara and Tigray regions, with Oromia region also seeing some continued volatility. On 10 October, the Tigray People’s Liberation Front (TPLF) forces, Samri youth militia, and Qemant and Gumuz ethnic militias clashed with the Ethiopian National Defense Force (ENDF), Amhara regional special forces, and Amhara militias in Jebers Kara area and Bere and Sharo mountains in Metema woreda in Amhara region. The government forces reportedly regained control of some strongholds held by the TPLF and its affiliated armed groups in these areas. Moreover, two landmines assumed to be planted by the TPLF exploded last week in Kalim and Werke in Raya Kobo woreda in North Wello zone. In Kalim, one person was reportedly killed and four others were wounded, while an unknown number of civilians were injured in Werke.

Armed clashes continued to be reported in Tigray region. Last week, TPLF forces clashed with the ENDF and Eritrean Defence Forces (EDF) around Dedebit and Adiyabo in North Western Tigray zone (see map below). Additionally, the TPLF stated that on 9 October, the EDF had launched an “extensive offensive” towards “Rama, Zalambessa and Tserona fronts” in northeastern Tigray (Twitter @TigrayEAO, 10 October 2022). It was also reported that government forces clashed with TPLF forces in Merewa, Waja, Semiza, Jemedo, Meharmar, and Mahgo areas in Raya Alamata in Southern Tigray zone, regaining control of these areas following the clashes. 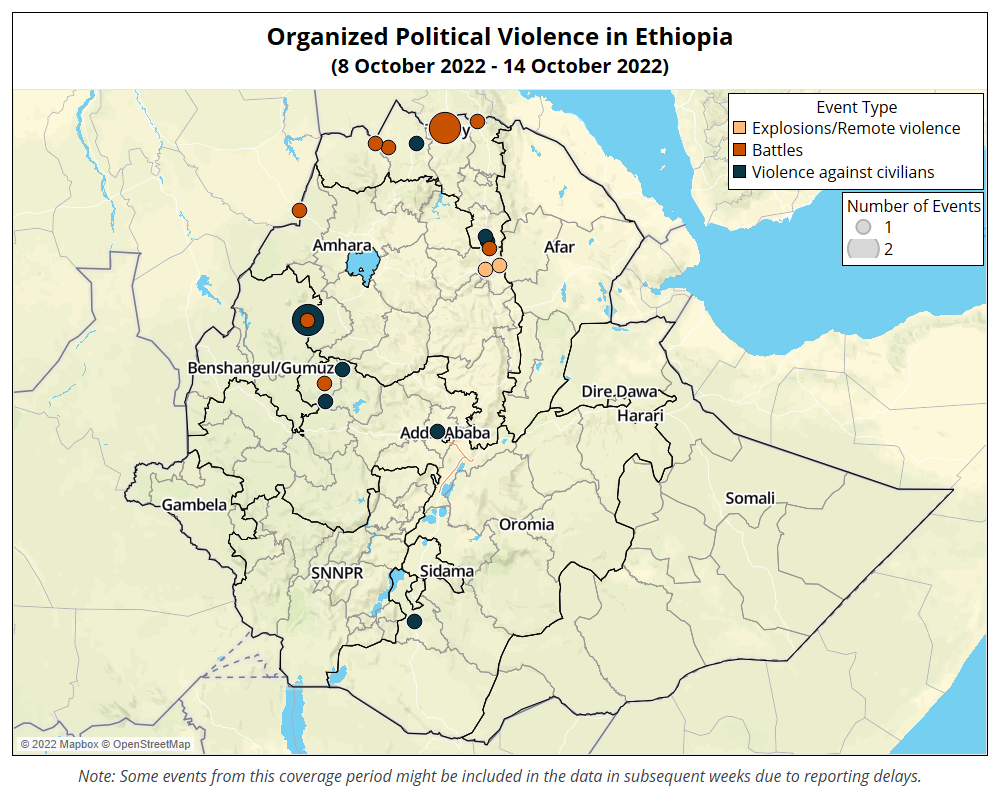 Last week, on 9 October, the TPLF called on all residents of Tigray to take part in the war (BBC Amharic, 10 October 2022). This week, on 17 October, the government stated that due to “repeated and grave violation of Ethiopia’s airspace by hostile foreign actors supporting the TPLF,” the government forces are taking “defensive measures” and that it is “imperative that the Government of Ethiopia assumes immediate control of all airports, other federal facilities, and installations” in Tigray (Twitter @FdreService, 17 October 2022). These statements suggest that despite the calls by the US, EU, and AU on both parties to cease hostilities, armed clashes will likely continue in the region for the time being. Moreover, the recent statement by the government indicates the federal government’s interest in regaining control of the capital city of Tigray region, Mekele. During the government’s November to December 2021 defensive operation against the TPLF, the government revealed that it was not interested in capturing Mekele but only in pushing back TPLF forces out of Afar and Amhara regions (Reuters, 24 December 2021).

Civilians continue to bear the brunt of ongoing violence in Ethiopia. According to the internal UN bulletin dated 10 October, around 470,000 people have been internally displaced due to the new round of armed clashes, which began on 24 August (Reuters, 16 October 2022). In addition, the International Rescue Committee (IRC) stated that on 14 October, one of its employees and two other civilians were killed while another employee and three other civilians were injured due to an airstrike conducted by the ENDF in Shire in North Western Tigray zone (IRC, 15 October 2022; Reuters, 16 October 2022). It was also reported that TPLF forces killed and abducted an unidentified number of people in Korem and Alamata towns in Southern Tigray zone.

On 12 October, a member of the OLF party executive committee was reportedly shot and killed by unidentified gunmen near his home in Sansusi in Burayu town in Finfine special zone in Oromia region.

Extrajudicial killings and property destruction by government forces in Oromia region also continued. Last week, members of the ENDF reportedly shot and killed eight people in Bule Hora woreda in West Guji zone after accusing them of being members of the OLF-Shane. In addition, on 8 October, government forces, assumed to be members of the ENDF, burned five houses in Boku Niso kebele in Mida Kegn woreda in West Shewa zone after accusing the owners of having links with the OLF-Shane.

In Benishangul/Gumuz region, on 11 October, Gumuz ethnic militiamen killed the administrator of Mandura woreda and seven others, including his driver and ENDF soldiers who were traveling with him as part of a separate security mission in an area between Ajenta and Tuni Dabisha kebeles in Mandura woreda in Metekel zone. Further, the same armed group attacked Gumuz civilians in Tuni Dabisha kebele in Mandura woreda on 13 October for an unknown reason. The region had been relatively calm over the past few months.

Lastly, the General Secondary Education Certificate Examination took place last week. For the first time, this examination was held at public universities, and examiners were moved to these universities to prevent the leaking of exam papers and cheating. It was reported that close to 12,000 students in Amhara region walked out of the exam rooms and refused to take the examination. On 11 October, 7,150 of 12th grade students who were sitting for the exam in Debre Tabor University refused to take the exam, left the exam rooms, and attacked examiners and security officers in Debre Tabor town in South Gondar zone in Amhara. The riot erupted following what the officials said was the “fake news” widely shared on social media claiming that “exams were taken out and accessed in other areas” (Tikvah Ethiopia, 11 October 2022). One student was killed and an unknown number of security personnel were wounded during subsequent violence after security forces intervened.

Correction Note: This report was edited to specify the type of attack which killed an IRC employee and civilians in Shire in North Western Tigray zone and the perpetrator of this attack.