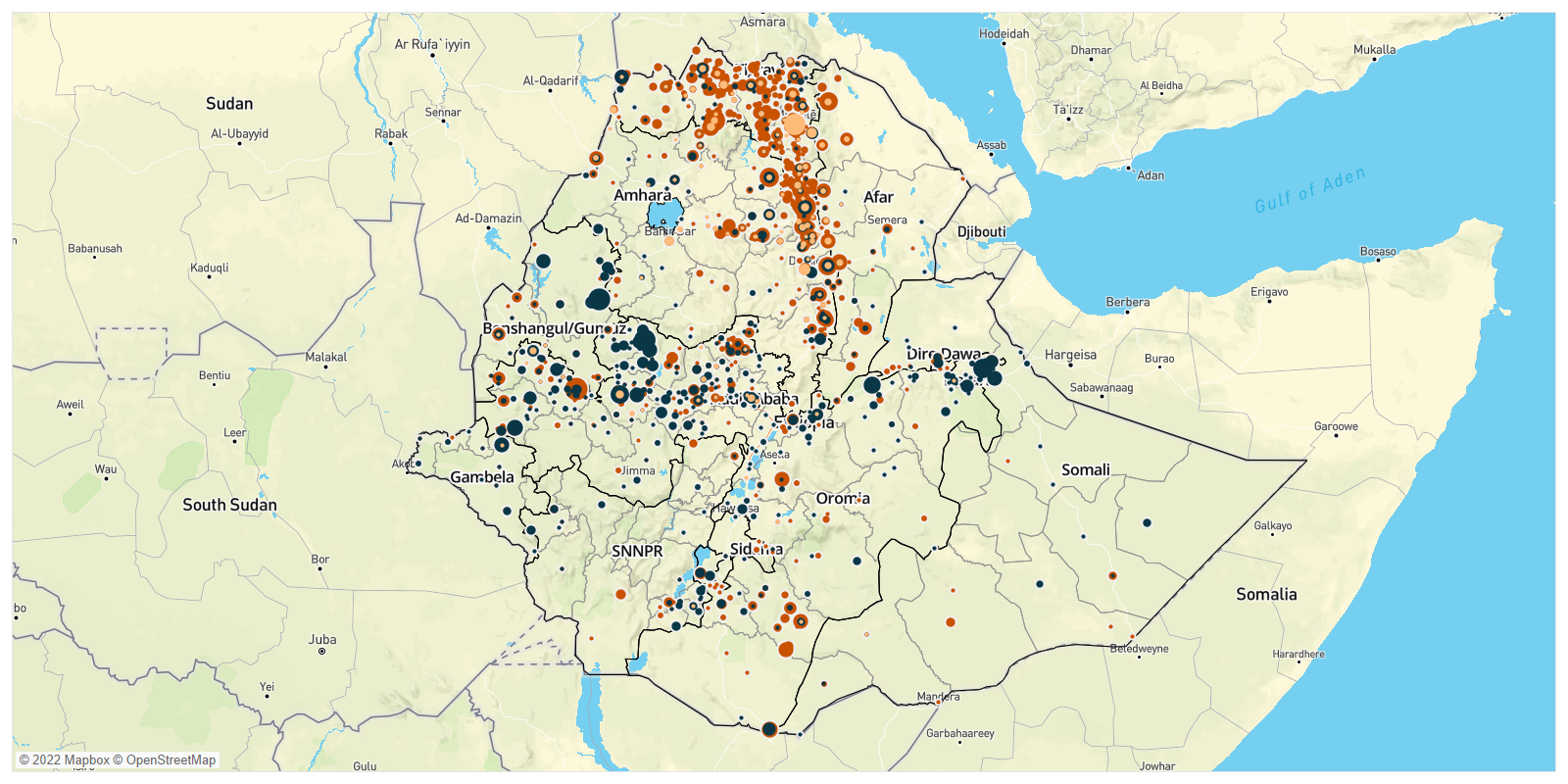 By the Numbers: Ethiopia, 5-11 November 20222Some events from this coverage period might be included in the data in subsequent weeks due to reporting delays. 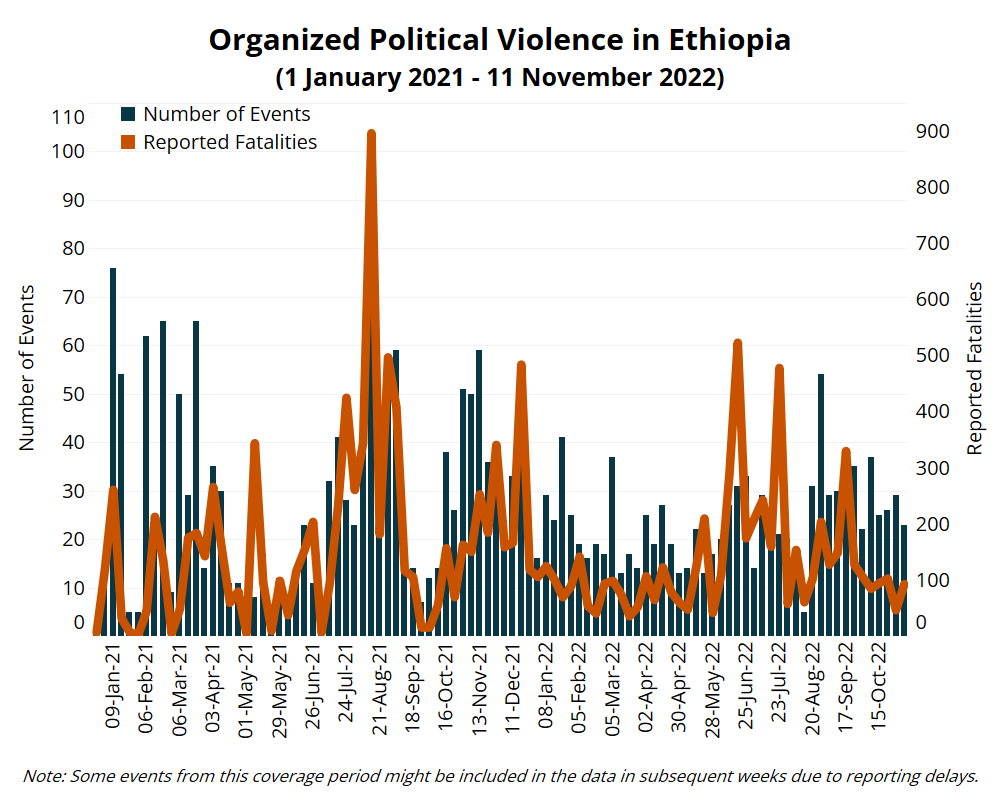 Indicating the initial success of the recently signed peace agreement, no political disorder events were reported in northern Ethiopia last week. During the past week, the heads of Ethiopian National Defense Force (ENDF) and Tigray People’s Liberation Front (TPLF) forces met in Nairobi, Kenya, to discuss the implementation of the peace agreement which was signed in South Africa a week earlier. After six days of closed-door discussions, the two parties signed another document on 12 November: “Declaration of the Senior Commanders on the Modalities for the Implementation of the Agreement for Lasting Peace Through a Permanent Cessation of Hostilities” (The Ministry of Foreign Affairs of Ethiopia, 12 November 2022).

Oromia region continues to be the most unstable region in the country, with intense violence reported in western Oromia. Violence has intensified over the past two weeks, with the Oromia Liberation Front (OLF)-Shane attacking several major cities. On 6 November, the OLF-Shane entered the administrative center of East Wollega zone, Nekemte city, and clashed with the ENDF and Oromia regional special forces in Kumsa Moreda, Mariam Sefer, Kebele Sebat, and Derge Beke Jama areas of the city. At least five members of the OLF-Shane, three civilians, and an unidentified number of government forces at an unknown checkpoint were reportedly killed, while an unspecified number of people were injured. Further, the group looted two banks, released prisoners, and abducted an unidentified number of government officials (Addis Standard, 9 November 2022; ESAT, 6 November 2022; EMS, 6 November 2022). The OLF-Shane spokesperson claimed the group freed around 120 prisoners (Twitter @OdaaTarbiiWBO, 6 November 2022).

The OLF-Shane appears to be taking bold steps in order to secure more territory and threaten government positions. In the past two weeks, out of 21 woredas in East Wollega zone, the armed group regained control of 11 woredas. According to the deputy chairman of Tole kebele, the OLF-Shane regained control of “almost all 32 kebeles” within Gimbi woreda (Ethiopian Reporter, 6 November 2022). As a result, government officials, security forces, and a large number of civilians have been fleeing these areas. On 4 November, the ethnic Amhara residents of Tole kebele in Gimbi woreda reportedly left the area in fear of being attacked by the OLF-Shane again when government forces left the area. According to the Ethiopian Human Rights Council, more than 1,800 households fled this area with the escort of the federal police (Borkena, 11 November 2022). In June 2022, an attack by suspected OLF-Shane forces in Tole kebele resulted in the deaths of hundreds of civilians (see EPO Weekly: 18-24 June 2022 for more information).

In the meantime, airstrikes continued in Oromia region, with the ENDF targeting OLF-Shane in an attempt to slow their advance. Last week, on 9 November, the ENDF conducted multiple airstrikes on an OLF-Shane vehicle in Mendi in West Wollega zone, killing at least 18 people, including 16 civilians. The OLF-Shane regained control of Mendi recently. The number of airstrikes in the region has increased since September 2022 (for more details on the trend of airstrikes in the country, see EPO Monthly: October 2022).

For the past few weeks, the OLF-Shane has closed the main road connecting Asosa zone of Benshangul/Gumuz to Addis Ababa through Nekemte city. The group reportedly abducted an unidentified number of drivers who were heading to Asosa. According to witnesses, civilians, including truck and bus drivers, are stuck in Gimbi town because the main road is closed (DW Amharic, 9 November 2022). As a result, basic necessities and items cannot enter the zone, leading to prices increasing in the area.

Two other abduction events by the OLF-Shane were also recorded in the region. On 7 November, the OLF-Shane abducted an unidentified number of drivers in Bora woreda in East Shewa zone. The next day, the group abducted an unidentified number of people after closing the road between Ginchi and Jeldu in West Shewa zone for several hours. The number of abductions has been increasing in the past few weeks, with most abductors demanding ransom for the release of the victims.

Furthermore, violence targeting civilians also continued in the region. Last week, 14 attack against civilian events were recorded (see map below). Most of these attacks against civilians – seven events – were conducted by members of the OLF-Shane in the areas the group overtook in West Wollega zone in the past couple of weeks. These attacks were recorded in Gimbi, Chekorsa, Nejo, Kiltu Kara, Bila, Babo, and Mendi woredas. Moreover, attacks on civilians continued in Jeju woreda in Arsi zone, with three such events occurring at Africa Juice Company, Huruta Dore kebele, and Amshara kebele. 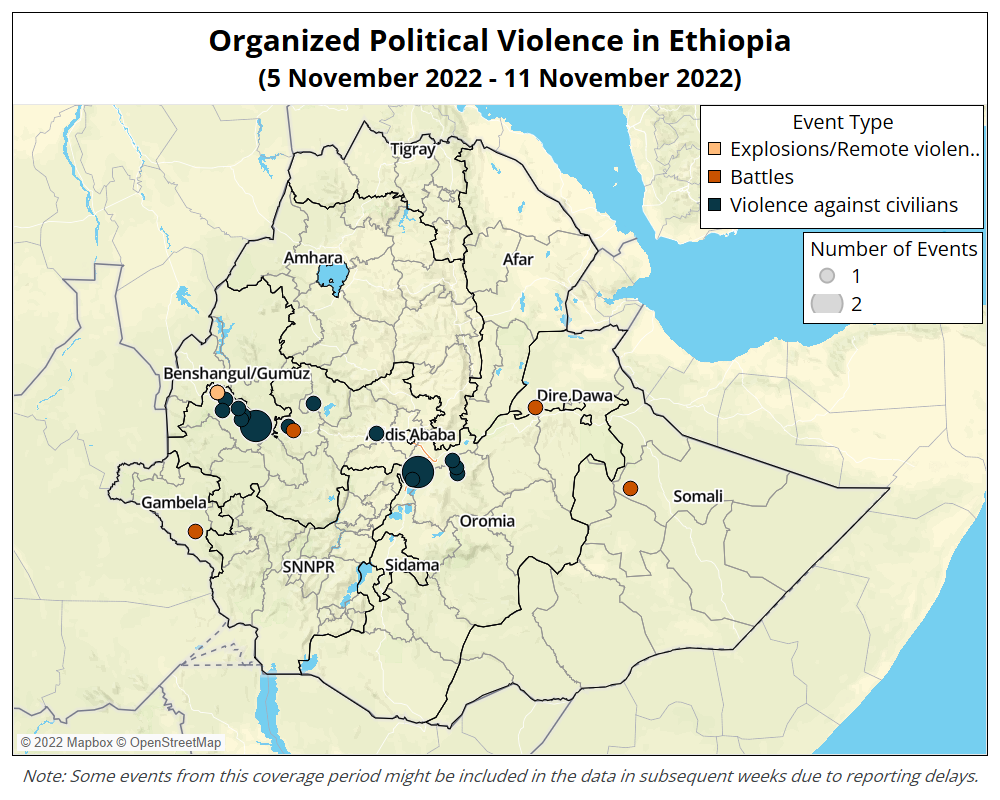 The OLF-Shane regularly denies that its forces are involved in events targeting civilians. However, witnesses continued to blame the group for ongoing abductions, in addition to other criminal activities. OLF-Shane officials have expressed frustration at local “copy-cat” attempts, in which self-proclaimed groups of armed men commit violence (like kidnapping for ransom) in the name of the OLF-Shane.3Interview with OLF-Shane official, July 2022. Whether the attacks are truly conducted by the OLF-Shane or not, the increase in such activities is concerning and points toward a general decline in security throughout Oromia. This dynamic could shift, although unlikely to change dramatically, with the freeing up of more security resources in the north.

In a speech to lawmakers in late February 2022, Prime Minister Abiy Ahmed provided a rare admission that the federal government was struggling to control the OLF-Shane due to the high amount of public support. He complained that the OLF-Shane fought “like a thief at night who looks around if there is anything to steal” and admitted that “a military strategy alone would not work” due to “people [Oromo people] hiding the armed fighters” (EBC, 22 February 2022).

Three armed clash events were recorded elsewhere in the country. In Gambela region, on 9 November, Murle ethnic militiamen from South Sudan ambushed Gambela regional special forces in Bandera kebele in Dima woreda in Agnewak zone and killed two regional police officers, including a woreda police commander, and wounded another one. Government forces were pursuing the armed group following the group’s failed attempt to stop a civilian vehicle that escaped an attempted attack the day before (DW Amharic, 9 November 2022).

Lastly, two armed clash events between Afar and Somali ethnic militias were recorded in Dheymeed woreda in Siti zone and Degehamedo woreda in Jarar zone in Somali region, resulting in the killings of 18 civilians. The reason behind the clash in Dheymeed woreda is unknown, while in Degehamedo woreda, the two parties clashed over contested territory. Clashes involving Afar and Somali ethnic militias flare occasionally in Siti zone over a set of disputed towns (see the Afar-Somali Border Conflict page for more information).