Over the past year, Metekel Zone has been one of the most violent areas in the country. Since 2018, ACLED has recorded 1,052 fatalities occurring in the Region as a result of political violence, and this is likely a conservative estimate. Most fatalities are linked to attacks mounted by unspecified ethnic militias on ethnic Amhara civilians. 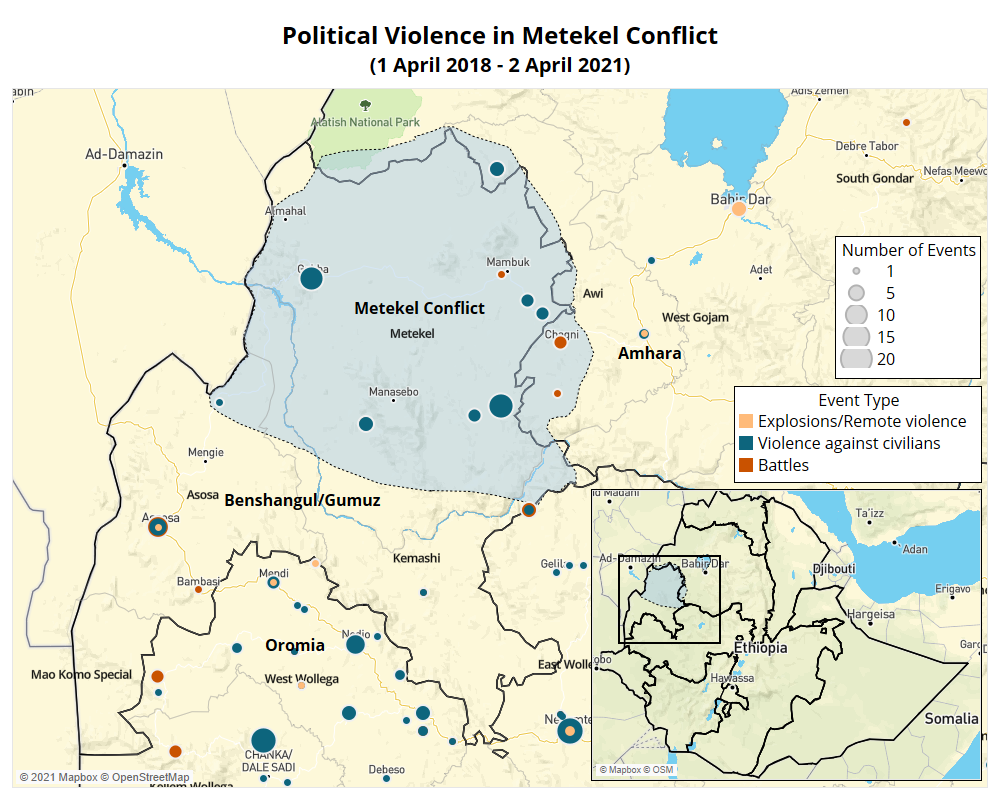 Official sources have continually refused to definitively identify the perpetrators of the violence, although they are almost certainly made up of Gumuz ethnic militias who may be associated with more officially organized ethno-nationalistic movements. Locals sometimes place blame on factions of the Oromo Liberation Front (OLF), OLF-Shane, as being behind the killing, which the latter denies. Some OLF leaders believe splinter groups that once belonged to the Front could be responsible (Yusif Semir, 9 December 2020). Government sources have consistently accused “anti-peace forces” of having links with Sudan (AFP, 12 February 2021).

The conflict in Metekel has deep roots. The area is inhabited by Gumuz, Shinasha and other ethnic groups (Amhara, Oromo, Agew, and others). Gumuz and Shinasha are identified as indigenous ethnic groups, while ethnic Amhara from areas of Wollo were resettled into the fertile land in Benshangul/Gumuz Region during a severe drought in 1984-1985, triggering immediate land conflicts. This issue was exacerbated by the ethnic-based politics of the EPRDF, which came to power in 1991 and placed sovereignty into the Gumuz community, effectively excluding ethnic Amhara (and other ”settlers”) of political representation and exposing them to attacks by ethnic-based militias and a lack of proper government protection (Foreign policy, 6 January 2021).

In the face of increasing fatalities as a result of attacks on Amhara civilians, Amhara authorities began to demand that additional actions be taken. In December of 2020, the Commissioner of the Amhara Regional State Police requested that his force be responsible for solving the crisis in Benshangul/Gumuz Regional State, or that the federal government intervene (Amhara Mass Media Agency, 7 December 2020). Officials of the Benshangul/Gumuz Regional State reacted to these requests by labeling the requests as “repeated threats of intimidation” (Benshangul/Gumuz Regional Government Communication Issues Office). However, the conflict was consistently and extremely violent in past months. As of 23 January 2021, the Federal Government has declared a state of emergency ín Metekel Zone (EBC, 23 January 2021) and federal troops have taken control of security in the area.  This official transfer of security responsibility represents a formal intervention by multiple factions of the federal government into the regional affairs of the Benshangul/Gumuz State. On one hand, this satisfied the demands of officials from the neighboring Amhara State without exposing Metekel Zone to the complications that would have occurred had the Amhara Region involved directly. On the other hand, it exposes ethnic Gumuz communities to a heavy crackdown by the Ethiopian armed forces, involving alleged massacres of civilians by federal troops and the dismissal of political leaders (Addis Standard, 8 March 2021; DW Amharic, 11 February 2021).

The government has made enormous efforts to bring peace to the Metekel Zone, with what appears to be varying amounts of success. A recent statement by the Deputy Head of the Western Command of the Ethiopian Army indicated that  around 3,230 fighters had surrendered to the army (Xinhua, 16 March 2021). The army has also implemented the training of commununal militias (EBC, 23 January 2021) and taken steps to reshape the police into a multi-ethnic force (EBC, 20 February 2021).