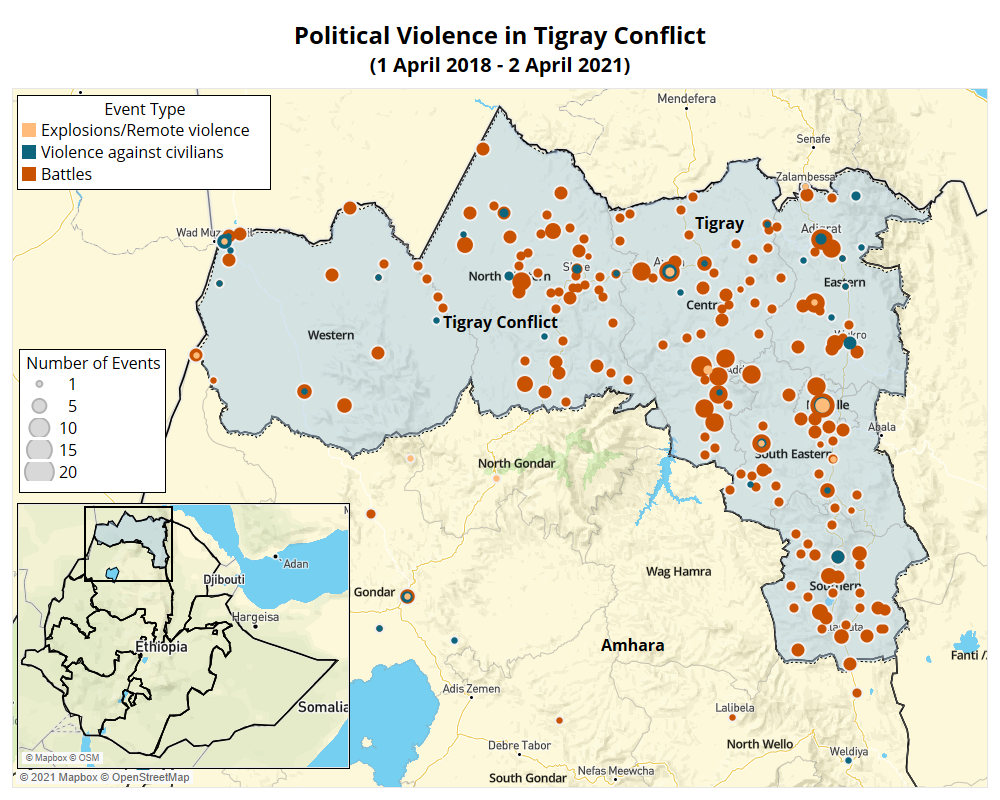 Four weeks of intense fighting resulted in what appeared to be a decisive victory for the federal government, and troops claim to be squarely in control of all major cities in the region. Debretsion’s whereabouts are not currently known, and a number of high-level TPLF officials have been killed or captured (Reuters, 14 January 2021). Although the conflict with the TPLF was declared officially over, clashes between TPLF forces and local militias, on one side, and ENDF and Eritrean Defence Forces (EDF), on the other, continued throughout December, January and February. The  humanitarian situation remained dire, and little access was granted to the region until March. In March and into April, dangerous conflict dynamics have evolved with the involvement of ethnically exclusive militias from the Amhara region as well as Eritrean troops. These dynamics are explored below (for more, see EPO’s Tigray Conflict Timeline).

During the first week of armed conflict, the federal government quickly declared the TPLF administration illegal and removed TPLF officials from their offices, stripped TPLF leaders of  immunity, and appointed a new regional president (VOA News, 13 November 2020). Early reports from the region indicate the new administration is facing major governance struggles. Hospital staff have not been paid in months, and the economic disruption and change in political leadership has resulted in some 4.5 million people in need of emergency food assistance (Addis Standard, 25 January 2021). Rape, looting, and other abuses by Ethiopian and Eritrean soldiers and militiamen occupying parts of the region are increasingly reported (Reuters, 25 January 2021).

Recent events demonstrate the stress placed on the interim administration. Ataklti Haileselassie, the interim mayor of Mekelle city, recently resigned from his post (Addis Standard, 30 March 2021). On 20 February 2021, the leader of the Fenkil Movement, along with two bodyguards, were reportedly killed by unidentified gunmen in Hiwane in southern Tigray (Borkena, 21 February 2021).

The war with the TPLF was fought by both troops from the federal government and a host of regional militias from across the country. The neighboring Amhara Region supplied significant manpower for the operation, and these forces have since been associated with securing territory in the Tigray and administrating subregions for the occupation and political transition. These patterns are pronounced specifically in the Western Tigray Zone.  As part of the efforts against the TPLF, Amhara communal militias and the more formal Amhara Special Forces (‘Liyu Haýil’) occupied swaths of Western Tigray, a zone inhabited by large numbers of Amharic-speaking farmers.  Initial reports indicate that Amhara administrators and security forces are being utilized as interim directors in areas of Western Tigray (France24, 23 November 2020).

Ethnic violence in the western part of the region is frequently reported, as the area’s ‘ownership’ has long been disputed. As Amhara Special Forces advanced to the north, 500 Amhara civilians were reportedly killed in the town of Mai Cadra by a Tigrayan ethnic militia. Currently, the Amhara in control of these localities likely see themselves as protectors of their co-ethnic populations rather than actors playing a role in the federal strategy and narrative of re-integration (EHRC, 24 November 2020). Security in these areas is now being provided by Amhara militias, and administrative duties have been handed over to Amhara transitional authorities, sparking fears of retaliation against ethnic Tigray who live in the area (Ethiopian Human Rights Commission, January 2021). Displacement trends recorded by humanitarian organizations support these claims: in Western Tigray areas administered by Amhara forces, there are reports of widespread violence, looting, and forced displacement of ethnic Tigrayans, either to Sudan or to the Northwestern Tigray Zone (OCHA, DTM, Regional DRMO, 19 January 2020).

Claims to ‘rightful’ possession and ‘Amhara genocide’ are political fodder for Abiy, who requires both Amhara and Oromo support for his Prosperity Party’s current coalition to function and perform well in the upcoming election. This suggests that violence specifically by Amhara militias and Special Forces will continue to be met with silence at the federal level, and possibly be eventually accepted as the new normal. In particular, in areas that the federal government does not deem as nationally important, and where it has no interest in contesting Amhara governance, it will support their efforts.

Amhara forces quickly occupied the south and began to govern without significant displacement. However, the conflict began to become extremely active in Southern Tigray Zone and Southeast Tigray Zone as of March, and roaming TPLF forces began to engage in convoy attacks and battles with ENDF forces. As of this time, access to these zones was limited, with reports of airstrikes and armed confrontations in Ofla, Neqsege, and Bora areas. There are also reports of significant acts of mass killings in Gijet and Samre throughout the conflict.

Violence against Civilians, Administrative Struggles, and a Limping Insurgency

The conflict in Tigray has been extremely costly. Although a government black-out on media in the region has left much up to speculation, reports emerging from the region paint a grim picture. Approximately 4.5 million people are said to be in need of humanitarian assistance. Millions have been displaced and are facing food insecurity. Infrastructure and farmland have been destroyed. Ethiopian and Eritrean forces have been accused of grave human rights abuses.

The war was declared over within four weeks, with the ENDF taking Mekelle on 29 November 2020. In the following weeks, TPLF forces engaged in different tactics, including rarely holding towns and instead retreating mainly into Central Tigray Zone. However, the conflict continued in various forms, including local militias fighting the ENDF, EDF, and Amhara forces in different parts of the region, and a campaign of violence against civilians that continued from urban to rural areas across the state.

Mass killings were frequently reported during this period. These attacks were often in urban centers, and were concentrated in the Eastern and Central Tigray Zones. The attacks closely correspond to the arrival and presence of Eritrean troops in these zones.

In the January-February 2021 period, attacks on civilians were numerous and often reported to be perpetrated by Eritrean troops in rural areas. After conducting mass killings in towns, Eritrean troops concentrated on looting in those spaces, while others went through rural villages looking for, and killing, suspected militia members, which resulted in the deaths of many men. This period is also associated with a widespread sexual violence campaign targeting women, believed to be perpetrated by both Eritrean and Ethiopian troops. The extent of this rape campaign is staggering, and suggests that civilians across the region were terrorized by killings, rapes, and severe food shortages. The leadership of the TPLF were often found and killed or imprisoned during this time, while the active, and absent, senior leadership encouraged people to continue fighting and supporting their cause.

In March, Tigray opened up significantly to international representatives, development agencies, and journalists. The conflict shifted as uncoordinated TPLF forces operated in the central, southern, northwestern and eastern areas of the region. Conflict hotspots are moving quite frequently, and no territory is held at present by small insurgent bands.

However, the conflict remains ongoing, with active hostilities in northwest, central, eastern, southeastern, and southern Tigray. Heavy fighting has subsided in the border areas of the northwest and central zones, which had previously hosted a brief, intense insurgency around Abi Adi. Most of the present conflicts are occurring in rural areas, although there are brief skirmishes on main roads, and a large effort in southern zones.