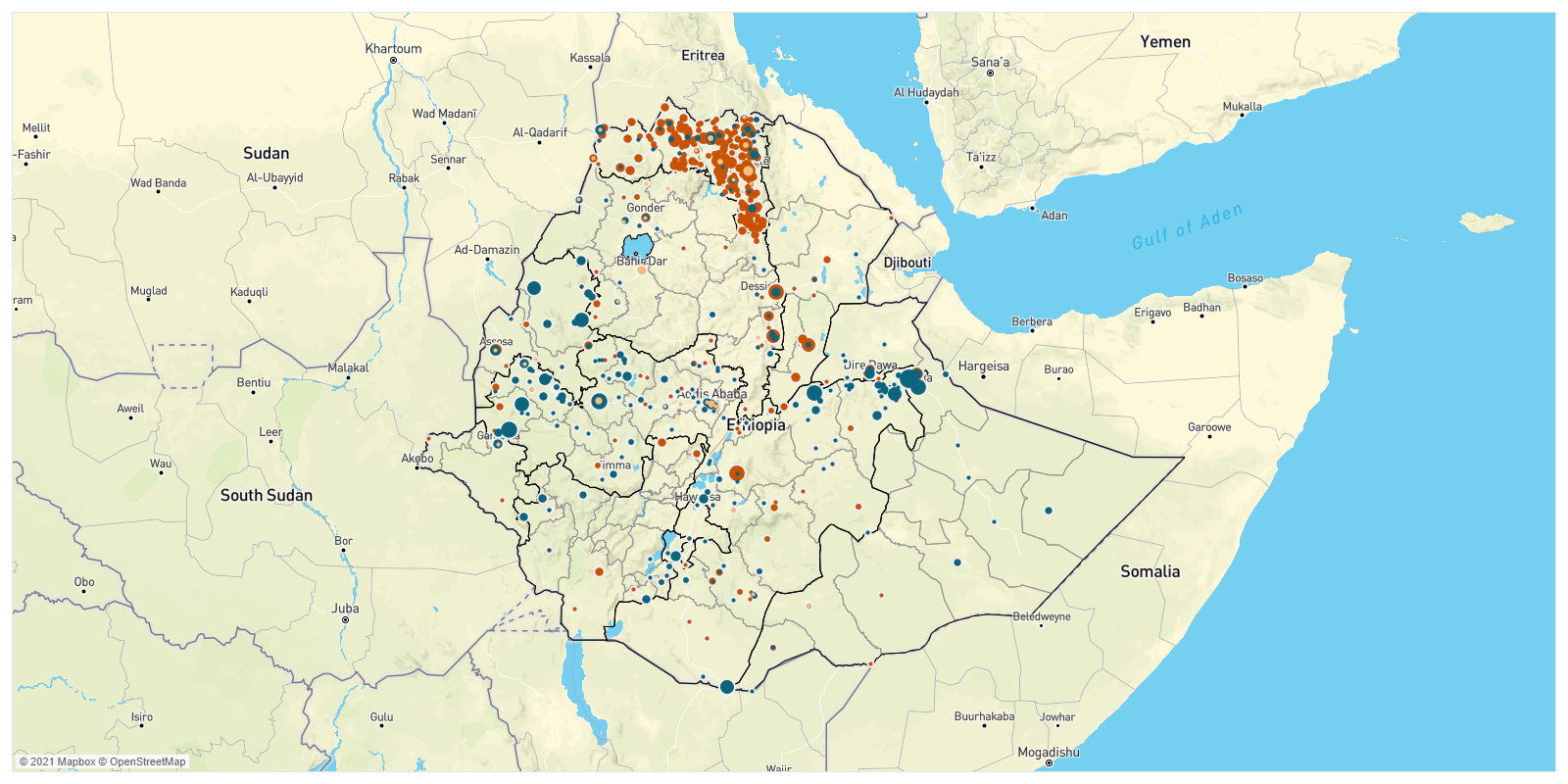 Security continues to be a key concern for Ethiopia as the national elections draw near and tensions related to ethnic polarization challenge the security forces of the country. Major instances of violence were reported in Oromia, Amhara, Benishangul Gumz, Tigray, and the Southern Nations, Nationalities, and Peoples’ Region (SNNPR) regions over the past two weeks (see figure below). Demonstrations were held in Addis Ababa after the United States (US) State Department placed visa restrictions on Ethiopian and Eritrean officials over their role in the Tigray conflict (NPR, 24 May 2021).

In the Amhara region, student demonstrators clashed with security forces during a Prosperity Party (PP) campaign event in Merawi, West Gojjam, prompting gunfire that left four people dead and several others injured (D.W. Amharic, 21 May 2021). The National Movement of the Amhara party (NaMA), an Amhara nationalist party that mobilized thousands of people last month to demonstrate in major cities across the region, condemned the incident and called for an investigation (NaMA, 21 May 2021).

In Benshangul/Gumz region, an agreement was signed between representatives from the Benshangul/Gumz regional government and members of an armed group who are undergoing re-integration training in the region. According to government officials, those undergoing the training are members of the Gumuz People Democracy Movement (የጉሙዝ ሕዝብ ዴሞክራሲያዊ ንቅናቄ) (BBC Amharic, 19 May 2021). The regional government agreed to reserve local governance positions for members of the armed group as well as provide farmland and land for house construction. Despite these efforts, the region remains unstable. On 17 May 2021, gunmen from the Gumuz Liberation Front ambushed and killed 20 federal soldiers and two drivers in Guba Woreda, Metekel Zone (ESAT, 18 May 2021).

In the Somali region, on 20 May 2021, Afar militias attacked the Somali militia in Birta Dheer village and Tarayne to the west of Sitti, sparking clashes. At least six people were killed, and 25 others were injured (Voss TV, 20 May 2021). Clashes in contested areas between the Somali and Afar regions have claimed the lives of hundreds of people in the runup to the national election.

In the capital city Addis Ababa, on 9 May 2021, police fired tear gas and blocked roads to prevent worshipers who were heading to Meskel Square (Abiyot Square) from participating in a city-wide Iftar program (D.W. Amharic, 10 May 2021). Addis Ababa city administration later apologized for the disruption of the Iftar program. A city-wide Iftar program was later held on 11 May 2021 without any incident (Ethiopian Broadcasting Corporation, 10 May 2021). On 21 May 2021, protesters gathered in Addis Ababa to denounce foreign interference in Ethiopia’s internal affairs. Slogans chanted by the protesters included “Hands off Ethiopia” and “It’s my Dam” (Amhara Media Corporation, 21 May 2021).

Finally, in the Southern Nations, Nationalities, and Peoples’ Region (SNNPR), on 18 May 2021, unidentified attackers in Sheko woreda of Bench Sheko zone killed nine security officers and wounded three others. The zone has been the site of heavy ethnic conflict over the past couple of months (VOA Amharic, 19 May 2021). Additional violence occurred in the Amaro special zone in the region (see more below). 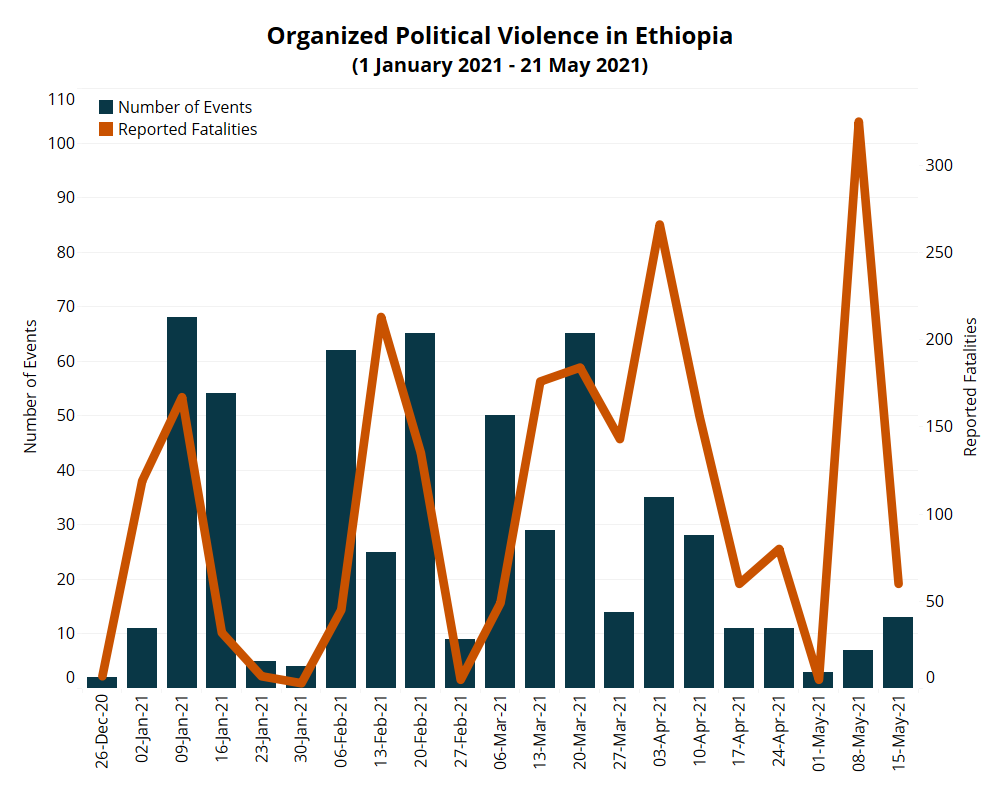 Violence continues to escalate in the Oromia region (see map below), with clashes and attacks against civilians being perpetrated by both government and antigovernmental armed forces over the past two weeks. On 1 May 2021, the Ethiopian House of People’s Representatives designated the Oromo Liberation Army (OLA), referred to by the government as OLF-Shane, as a terrorist organization (Office of the Prime Minister, 1 May 2021). The OLA responded by vowing to “engage in total war to remove the illegitimate clique from power” (OLA High Command Statement, 5 May 2021). Since the beginning of the month, the active conflict has intensified between OLF-Shane and federal forces in areas of western and southern Oromia, with battles taking place across Western Wollega, Kellem Wollega, Horo Guduru, Gujji, and West Gujji zones. Furthermore, recent high-profile incidents in the region — including the killing of a journalist, a public execution, and the kidnapping of foreign nationals — have highlighted growing tensions.

Battles were fought on 17 and 18 May 2021 when Oromia Special Police killed eight members of OLF-Shane in Gora Dola and Liben woredas in the Guji zone (Ethiopian Broadcasting Corporation, 18 May 2021; ESAT, 19 May 2021). On 12 May 2021, three civilians were killed, two injured, and more than 6,000 displaced in violence occurring in Amaro special woreda in SNNPR, an area bordering West Guji that often experiences armed conflict between ethnicities in the area (D.W. Amharic, 14 May 2021). A United Nations Office for the Coordination of Humanitarian Affairs (UNOCHA) report issued at the end of April indicated that the humanitarian operations in the area were being restricted due to increasing instability (Relief Web, 30 April 2021).

The conflict has also intensified in west Oromia. On 9 May 2021, a journalist from the state-affiliated Oromo Broadcasting Network (OBN) was shot and killed by suspected OLF-Shane Abbaa Torbe faction gunmen near his residence in Dembi Dollo city in Kellem Wollega zone (Ethiopian Broadcasting Corporation, 10 May 2021). The Abbaa Torbe faction has been accused of conducting regular assassinations of government officials throughout the past two years. Later in the week, the head of West Wollega Zone Road Authority was shot and killed along with his driver and three guards by members of OLF-Shane militias while driving two cars from Kondala woreda to Mendi town in West Wollega zone (VOA Amharic, 18 May 2021).

According to the government, since the beginning of this Ethiopian year (i.e., since 11 September 2020), OLF-Shane has killed 18 government-affiliated officials in the Oromia region (Walta, 10 May 2021). Attacks were also reported in Abe Dongoro woreda in the Horo Guduru Wollega zone, with militants killing three ethnic Amhara civilians (ESAT, 19 May 2021). The spokesperson for the Oromo Liberation Army (OLA), commonly referred to as OLF-Shane by the Ethiopian government, has denied the involvement of OLA forces in the killing of Amhara civilians in Horo Guduru Wollega. He instead pointed towards government-associated militias.

Amid a deteriorating security situation across western and southern Oromia, breakdowns in the federal structure are being observed and residents are exposed to an increasingly volatile situation. Judges interviewed by the ACLED team in areas of western Oromia have complained that court orders are often completely ignored by members of the armed forces, an issue they viewed as dangerous as the public may no longer trust the federal legal system. This trend has been observed at multiple levels, including high-profile cases like those of a Jimma University student who has been detained since February despite a judgment ordering his release (Addis Standard, 20 May 2021). Residents of Dembi Dolo city were shocked when Oromo regional special forces publicly executed a young man accused of being a member of OLF-Shane in a town square instead of referring him to the courts (BBC Amharic, 12 May 2021). Armed groups operating in the region also contribute to the breakdown in order and have carried out assassinations of public officials and journalists. A journalist for the state-affiliated media Oromo Broadcasting Network (OBN) was killed near his home by suspected OLF-Shane militants in Dembi Dolo a few days prior to the public execution (Ethiopian Broadcasting Corporation, 10 May 2021). 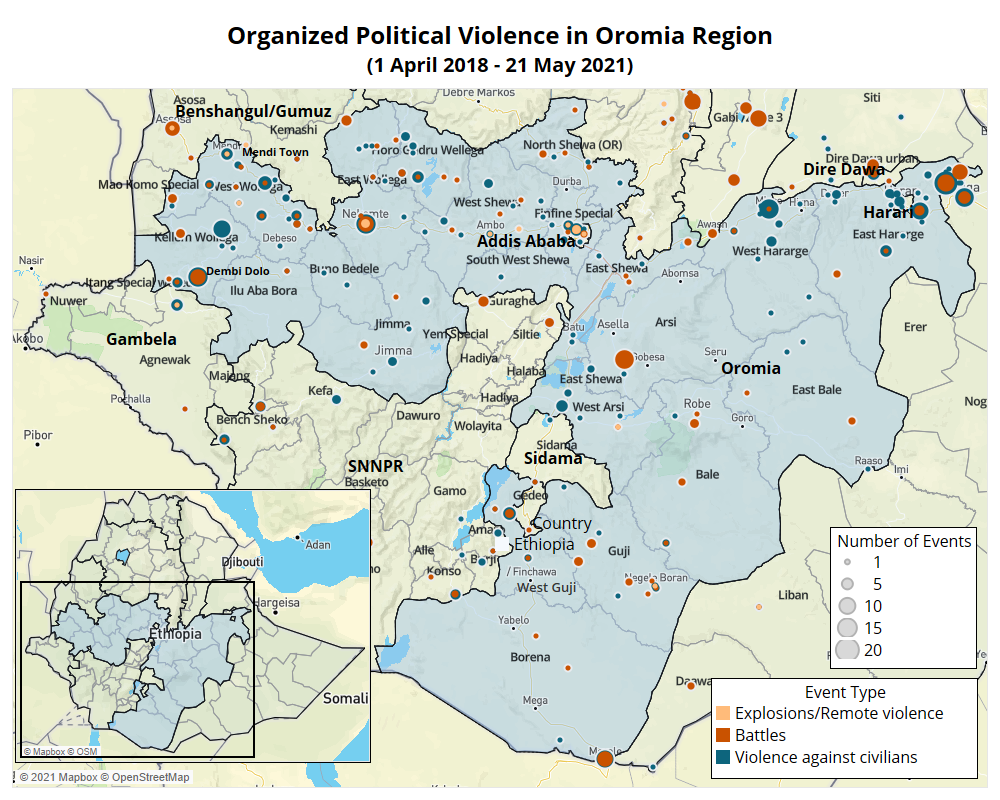 In the Tigray region, a number of international bodies have increased pressure on Ethiopian authorities over their role in the conflict against the Tigray People’s Liberation Front (TPLF). The impact of this pressure triggered protests in Addis Ababa, but has not yet translated into any actions inside the Tigray region. Although TPLF officials were included in visa restrictions imposed by the US Secretary of State this week, little has been said about their role in prolonging the conflict, hampering aid, and instigating violence against civilians.

On 10 May 2021, the US Special Envoy for the Horn of Africa visited Ethiopia. After this visit, the US Congress adopted a resolution, and the US Secretary of State announced sanctions. The resolution, which was later  adopted by congress, called for a ceasefire, national dialogue, unlimited access to humanitarian organizations, independent investigation of human rights violations, and the withdrawal of Eritrean forces and Amhara regional forces from the Tigray region (S.Res.97, 19 May 2021; Secretary of State Antony J. Blinken, 15 May 2021). Furthermore,  US Secretary of State Antony J. Blinken announced visa restrictions applying to all current or former Ethiopian or Eritrean government officials, members of the security forces, including Amhara regional forces, and, as noted, members of TPLF. The US also decided to pause any economic and security assistance to Ethiopia and asked other governments to take similar actions (Office of the Spokesperson, 23 May 2021).

Ethiopian officials hit back and stated that Ethiopia is a sovereign nation and has the right to deploy any “necessary security structures and means available in ensuring the rule of law within all corners of its borders is within its sole responsibility” (The Ministry of Foreign Affairs of Ethiopia, 17 May 2021). The Ethiopian government has showed its willingness to dialogue with legally recognized political parties to bring national consensus and peace. However, since the Ethiopian government has designated TPLF a terrorist group “which endangered the country’s sovereignty and its constitutional order, the government is not going to engage in dialogue with this group” (The Ministry of Foreign Affairs of Ethiopia, 17 May 2021).

Additionally, the government argued that it is currently investigating human rights violations in Tigray region as per its legal system. The government reported that 28 soldiers, who are suspected of killing civilians in a situation where there was no military necessity, and 25 soldiers, who are suspected of committing acts of sexual violence and rape, have been charged. Their trials are underway. At the same time, three soldiers who are accused of sexual violence and rape and one soldier who is accused of killing a civilian have been convicted and sentenced (The Ministry of Foreign Affairs of Ethiopia, 21 May 2021). Hence, the Ethiopian government rejected the calls for a ceasefire and dialogue. Moreover, as noted, on 21 May 2021, protesters gathered in Addis Ababa to denounce foreign interference in Ethiopia’s internal affairs, holding signs saying  “Hands off Ethiopia” (Amhara Media Corporation, 21 May 2021). Areas in Western Tigray zone, which are now controlled by the Amhara regional forces, also held an event to appreciate and thank the Amhara forces who struggled for the ‘freedom’ of Welkiet in Humera town (Amhara Media Corporation, 22 May 2021).