The Benshangul/Gumuz Region lies on Ethiopia’s western border with Sudan, and shares internal borders with Amhara and Oromia Regions. The Region hosts Ethiopia’s Grand Ethiopian Renaissance Dam (GERD) and has been the site of intense ethnic killings throughout the past year. Throughout the past two years, Metekel Zone of the Region has been one of the most violent locations in the country, with over 1052 fatalities recorded. The political violence situation in the Region is complicated and complex, but mirrors other locations in Ethiopia with themes of competing elites divided along ethnic lines and awarded political superiority by the Ethiopian ethno-federalist system.

The Region comprises five indigenous ethnic groups: Berta (also known as Benshangul), Gumuz, Shinasha, Mao, and Komo. Out of these five ethnic groups, the most populous are Berta and Gumuz. Just like other regional states, however, different ethnic groups also live in the Region. According to the last census in 2007, out of the Region’s 670,847 inhabitants, the Berta ethnic group is 173,743, Amharas are 142,557, Gumuz ethnic group is 141,645, Oromo 89,346, Shinasha 50,916, Agew-Awi 28,467, Mao 12,744, and Komo 6,464 (FDRE Population Census Commission, 2007). By 2019. it is estimated that the Region’s population has reached around 1.1 million (UNICEF Ethiopia, December 2019). Seventy-seven percent of the population lives in rural areas (Ibid). The capital city of Benshangul/Gumuz is Asosa. The Region is divided into three administrative Zones (Metekel, Asossa, and Kemashi), 17 Woredas, two special Woredas (Pawe and Mao Komo), and 33 Kebeles. The Region’s economy relies on agriculture. Large amounts of land in the Benshangul/Gumuz Region have been leased to mainly international investors in agriculture. The road density in the Region is low (28.4 km/1000 sq km) and during rainy seasons it is hard to travel to the rural areas of the Region (Hika Nigatu Ayele, 2017). 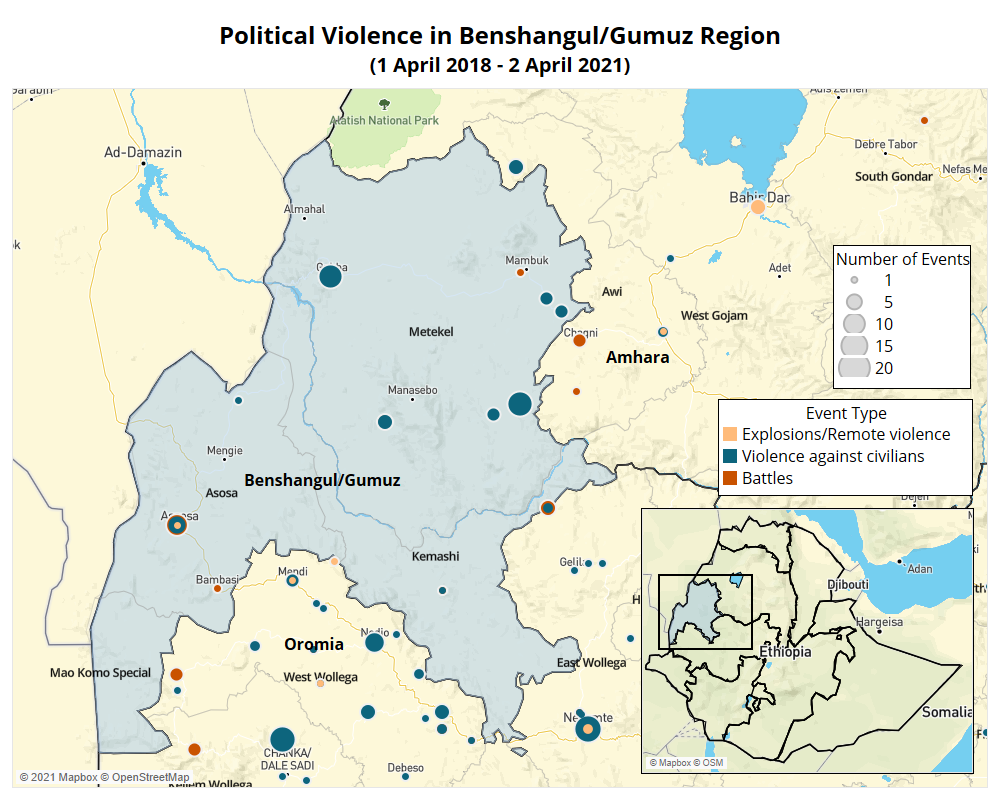 Over the past year, Metekel Zone has been one of the most violent locations in the country. Since 2018, ACLED has recorded 1,052 fatalities occurring in the Region as a result of political violence, and this is likely a conservative estimate. Most fatalities that are recorded represent attacks mounted by unspecified ethnic militias on ethnic Amhara civilians.

Official sources have continually refused to definitively identify the perpetrators of the violence, although they are almost certainly made up of Gumuz ethnic militias who may be associated with more officially organized ethno-nationalistic movements. Locals sometimes place blame on factions of the Oromo Liberation front (OLF) as being behind the killing, which the latter denies. Some OLF leaders believe splinter groups that once belonged to the front could be responsible (Yusif Semir, 9 December 2020). Government sources have consistently accused “anti-peace forces” of having links with Sudan (AFP, 12 February 2021)

The conflict in Metekel has deep roots. Ethnic Amhara from areas of Wollo were resettled into the fertile land in Benshangul/Gumuz Region during a severe drought in 1984-1985. This led to immediate land conflicts. This issue was exacerbated by the ethnic-based politics of the EPRDF, which came to power in 1991 and placed sovereignty into the Gumuz community, effectively excluding ethnic Amhara (and other “settlers”) of political representation and exposing them to attacks by ethnic-based militias and a lack of proper government protection (Foreign policy, 6 January 2021).

In the face of increasing fatalities as a result of attacks on Amhara civilians, Amhara authorities began to demand that additional actions be taken. In December of 2020, the Commissioner of the Amhara Regional State Police requested that his force be responsible for solving the crisis in Benshangul/Gumuz Regional State, or that the Federal Government intervene (Amhara Mass Media Agency, 7 December 2020). Benshangul/Gumuz Regional State officials reacted to these requests by labeling them “repeated threats of intimidation” (Metekel Zone Communication Bureau).

As of 23 January 2021, the Federal Government has declared a state of emergency to the Metekel Zone (EBC, 23 January 2021) and federal troops have taken control of security in the area. This official transfer of security responsibility represents a formal intervention by multiple factions of the federal government into the regional affairs of the Benshangul/Gumuz State. On one hand, this satisfied the demands of officials from the neighboring Amhara State without exposing Metekel Zone to the complications that would have occurred should the Amhara Region have become involved directly. On the other, it exposed ethnic Gumuz communities to a heavy crackdown by the Ethiopian armed forces, involving alleged massacres of civilians by federal troops and the dismissal of political leaders (Addis Standard, DW Amharic).

The government has made enormous efforts to bring peace to the Metekel Zone, with what appears to be varying amounts of success. A recent statement by the Deputy Head of the Western Command of the Ethiopian Army indicated that  around 3,230 fighters had surrendered to the army (Xinhua, 16 March 2021). The army has also implemented the training of communal militias (EBC, 23 January 2021) and taken steps to reshape the police into a multi-ethnic force (EBC, 20 February 2021).

Clashes sparked by the assassination of the Kamashi Zonal Administrator in West Wollega of Oromia Region led to ethnic violence in Kamashi town, inhabited by both Oromo and Gumuz ethnic groups. (Ethiopian Insight, 8 March 2019). While violence in this Region has largely subsided, EPO is monitoring the area closely as clashes could re-erupt in the context of increased actions by the Oromo Liberation Front/Shane splinter factions, in addition to conflicts that could arise between Oromia and Benshangul/Gumuz Regional authorities.

No political violence events have been reported in Asosa of late.