Gambela Region is located in southwestern Ethiopia, bordered by South Sudan in the west, Oromia Region in the northeast, and Southern Nations, Nationalities, and Peoples Region (SNNPR) in the southeast. The capital city is Gambela. It is estimated that in 2017 Gambela Region’s population was approximately 400,000  (Central Statistical Agency, 2013), and the Region has four administrative Zones: Agnewak-Zone, Nuwer-Zone, Mezhenger-Zone, and Etang Special Zone. Within these four Zones, there are 13 Woredas. In the Region, five ethnic groups are considered indigenous. These are the Anywaa (or Anyuak), Komo, Majanger, Nuer, and Opo. There are also people from other ethnic groups of the country living in the Region, often called “highlanders” (“Degenga”). Among these inhabitants of the Region, the Nuer and the Anywaa are the two largest groups in the Region, followed by the “highlanders”. The Nuer ethnic group is primarily agro-pastoralist, while the Anywaa ethnic group engages in  cultivation. As of 31 July 2020, the region hosts 321,014 refugees from South Sudan (UNHCR Gambella Information Management Unit, 2020). The Region’s working language is Amharic, but Nuer, Anywaa, and Afan Oromo languages are spoken too.

In the upcoming general election of Ethiopia, Gambela has 14 election constituencies containing 431 polling stations (NEBE, 2021) to record votes for three seats at the Federal House of Peoples´ Representatives and 156 seats of the Regional Council. Contestation for these seats is expected among the ruling party PP, the Gambela Regional Movement (GRM)- a former armed group which joined other six parties to form Ethiopian Citizens for Social Justice Party (EZEMA), the Gambela Peoples’ Justice for Peace and Democratic Movement, the Gambela Peoples’ Liberation Movement, and the Gambela People’s Liberation Democratic Movement. 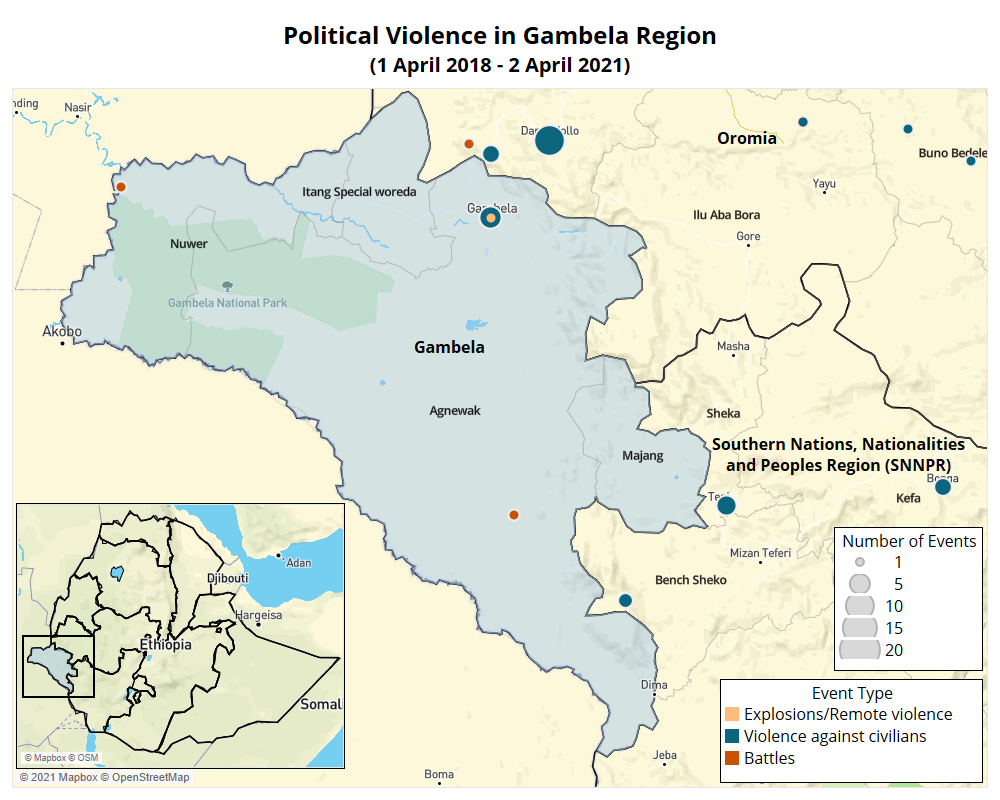 The Gambela Region has previously hosted multiple violent conflicts, largely caused by tensions due to multi-layered inter-ethnic, intra-ethnic, and indigenous versus “highlanders” conflicts. The civil war in South Sudan also has a spillover effect in the Gambela Region due to shared communities. Furthermore, there are frequent raids and abduction of mostly children by an armed group from South Sudan (Al Jazeera, 15 March 2017; BBC 21 April 2016; CGTN, 7 June 2016). It is believed that this group is from Murle community.

In the Region, ACLED regularly records incidents of armed clashes that occur in cross-border raids. Clashes, riots, and occasional protests are also sporadically reported in and around refugee camps in the area. Recent activity in the Region includes mass arrests conducted by the regional authorities against individuals accused of working with the TPLF or the OLF-Shane groups. In November of 2020, police arrested three young children (two boys and one girl) in Gambela town, accusing them of being members of OLF Shane. The two boys were severely beaten by prison guards (Ethiopian Human Rights Commission, 25 January 2021).