Ethiopia’s Southern Nations, Nationalities and Peoples Region (SNNPR) is the most diverse in the country, containing dozens of ethnicities and language groups. This generates a unique political dynamic that, while reflective of larger nationalistic trends, tend to remain more localized and does not spread across the region as conflicts in the more ethno-homogeneous regions of the country do.

The SNNPR is bordered by Kenya to the south, South Sudan to the west, the Gambela regional to the northwest, the Oromia Region to the north and east, and the Sidama Region to the east. By 2017, the region’s population was estimated to be around 19.1 million (FDRE Central Statistical Agency, 2013, Population Projection of Ethiopia for All Regions At Wereda Level from 2014 – 2017). According to the region’s administration, 56 ethnic groups are considered indigenous (Beza Dessalegn & Nigussie Afesha, January 2019). As per the last official census conducted by the government in 2007, Sidama ethnic group is the majority, followed by Wolayta, Gurage, and Gamo (FDRE Population Census Commission, 2008, pp.98-100). Since the Sidama ethnic group established its own regional state in November 2019, the Wolayta ethnic group is the likely majority.

SNNPR is divided into 14 ethnic-based Zones and four Special Woredas, which are accountable to the Regional Council, and within 131 woredas, and 3,926 kebeles. However, since the implementation of ethnic federalism, different ethnic groups of SNNPR want to establish their own regional state (e.g., Sidama and Wolayta), special woreda (e.g., Ale ethnic group), or zone (e.g, Konso, Silte, Gamo-Gofa).

Since 2018, several of these requests are being addressed:  for instance, Ale ethnic group received the status of Special woreda, Konso and Silte became a zone, and the Gamo-Gofa zone split into two and became Gamo zone and Gofa zone. Moreover, several ethnic groups like Sidama, Kefa, Wolayita, Hadiaya, and Gurage pressed to secede from the SNNPR and establish their own regional states (Beza Dessalegn & Nigussie Afesha, January 2019). Among these groups, only Sidama’s request was accepted by the Regional Council. Based on the referendum held on 20 November 2019, Sidama became the 10th Regional State of Ethiopia. This created the possibility of other ethnic groups being granted their request. However, the Regional Council has not responded to the rest of these requests and wants to save the SNNPR from disintegrating into multiple regions. The discontent over the lack of decision is being expressed through violent demonstrations. 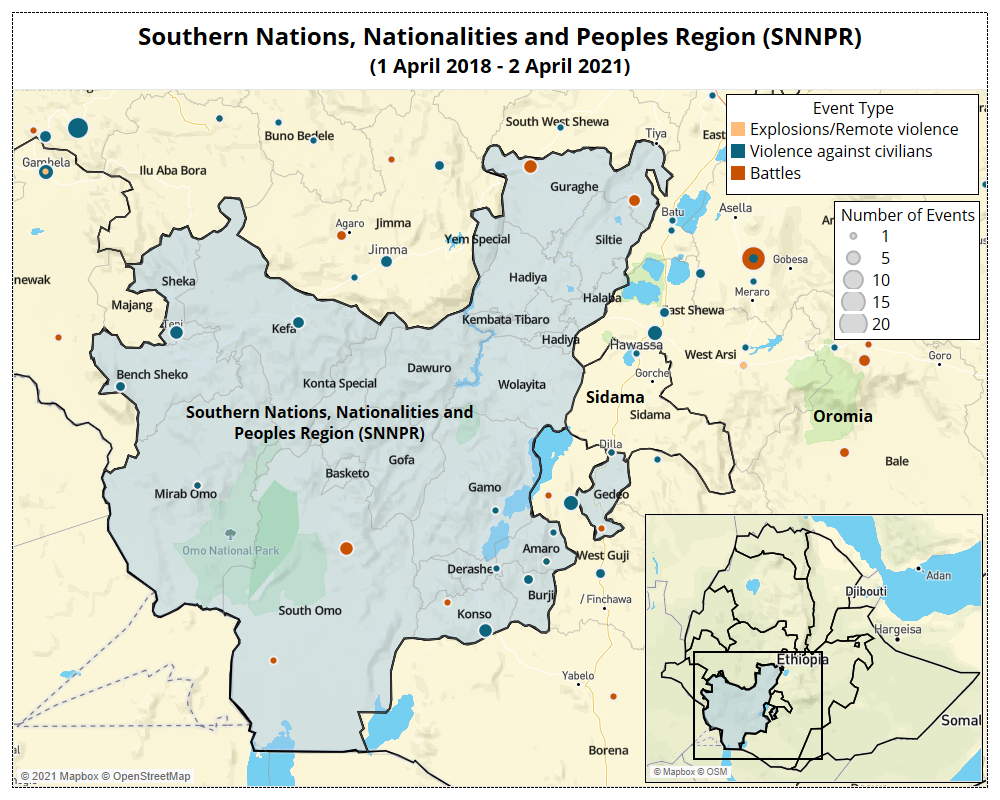 Conflicts and political movements in the SNNPR are administrative contests, with regional elites pushing for more autonomy and control over resources. The state’s response has been to suppress the actions of ‘mis-aligned’ residents who may support alternatives to Abiy’s Prosperity Party or who seek their own ethnically based zone or region. In response, mass arrests and acts of violence against civilians have taken on an intense frequency in recent months.

The Welayta people have requested their own regional state for some time. But their request intensified when the neighboring Sidama people had a confirmed referendum date to form their own regional state. Thus, the Welayta Zone Council unanimously voted for a regional state and submitted its decision to the Regional Council on 19 December 2018. When a request for regional statehood by Welayta officials was ignored, a massive demonstration was held in Welayta Zone’s capital city of Sodo on 17 May 2019. Further, Welayta Zone representatives boycotted the ten-days central committee meeting of the Southern Ethiopian Democratic Movement (SEPDM) in July 2019 (Addis Standard, 18 July 2019). After the 26 people, including leaders of the Welayta Zone and the opposition Welayta People’s Democratic Front (WPDF), were arrested on 9 August 2019, violent demonstrations erupted in Boditi and Gununo towns of the Zone, leading to the death of 21 people (Addis Standard, 12 August 2019). Although this violence has since subsided, future repression is likely as bids for autonomy re-emerge in the face of an uncertain future.

The Konso conflict emerged over the fallout of the Konso Woreda becoming a Zone in 2018. It once belonged in ‘Segen Area People’s Zone’ which consisted of Amaro Woreda, Burji Woreda, Derashe Woreda, Konso Woreda, and Ale Woreda. In this Zone, eight ethnic groups including the Alle, Burji, Dirasha, Konso (also known as Xonsita), Kore, Kusumie, Mashole and Moseye are together with other ethnic groups (like Oromo, Wolita, Amhara, Gurage).

After the implementation of the ethnic-based federalism in Ethiopia, the Ale people demanded to establish their own Woreda. To resolve this issue, in 2011, the SNNPR ruling party, the Southern Ethiopian People’s Democratic Movement (SEPDM), decided to establish Segen Area People’s Zone by removing the status of the Special Woreda of the surrounding Amaro, Burji, Derashe, and Konso Woredas and establishing a separate Ale Woreda.

This decision was made without much consultation with those living in the Zone, and was immediately met with resistance from the Konso population. A committee consisting of 23 members was established to advocate for the establishment of a separate Konso Zone, a formal request of which was later rejected by the House of Federation and by the SNNPR council. This led to another round of demonstrations in the Zone, with some protest leaders being imprisoned (Ethiopia Observer, 14, March 2016). Furthermore, there was a dispute over the capital city of the newly formed Segen Area People’s Zone as most ethnic groups – including the Konso people – wanted their capital city Karat to be the Zone’s capital city as it is easily accessible for most ethnic groups of the Zone and better equipped with infrastructure than the others. However, the Regional Council decided for the city of Segen (previously known as Gumade) to be the capital city of the Zone.

The Konso political prisoners were released in 2018 after Prime Minister Abiy announced the release of all political prisoners in Ethiopia. In November 2018, the Konso and Ale groups split from the Segen Area People’s Zone. Konso gained status as a Zone, immediately triggering violent conflict over its new status as elites fought for territory and political influence.

Like the conflict in West Guji, Konso has recently been the scene of intense bouts of ethnic-based violence over administration borders. While border disputes are common across Ethiopia, the scale and destruction that has resulted in Konso is shocking. Some 94,000 people have reportedly been displaced, with an unknown number killed (Addis Standard, 23 November 2020). These clashes mirror trends throughout the country: local elites seeking to control greater territory and resources engage in conflict to promote their own material agendas. While large and devastating, the Konso violence does not contain the capacity to spread more generally throughout the region as conflicts in Oromia, Tigray, or Amhara do. This is due to its highly localized nature, where local politicians engage little with overall political decisions at the central level and are more concerned with immediate territorial administration and resources.

The Konso Zone has been generally peaceful since conflict peaked in January of 2021, however, the area is still at risk of armed conflict should additional political disputes arise.