Oromia is the largest Region in Ethiopia. Stretching across Ethiopia from East to West, the Region consists of 34% of the land in Ethiopia and is home to over 37 million people (FDRE Central Statistical Agency, 2013,Population Projection of Ethiopia for All Regions At Wereda Level from 2014 – 2017). It is divided into 20 administrative Zones, 30 town administrations, 287 rural and 46 town Woredas. According to the last census, more than 65 ethnic groups and people from neighboring countries live in Oromia Region (FDRE Population Census Commission, 2008). The majority of the Oromia Region is inhabited by the Oromo ethnic group, followed by Amhara, Gurage, and Gedeo ethnic groups. 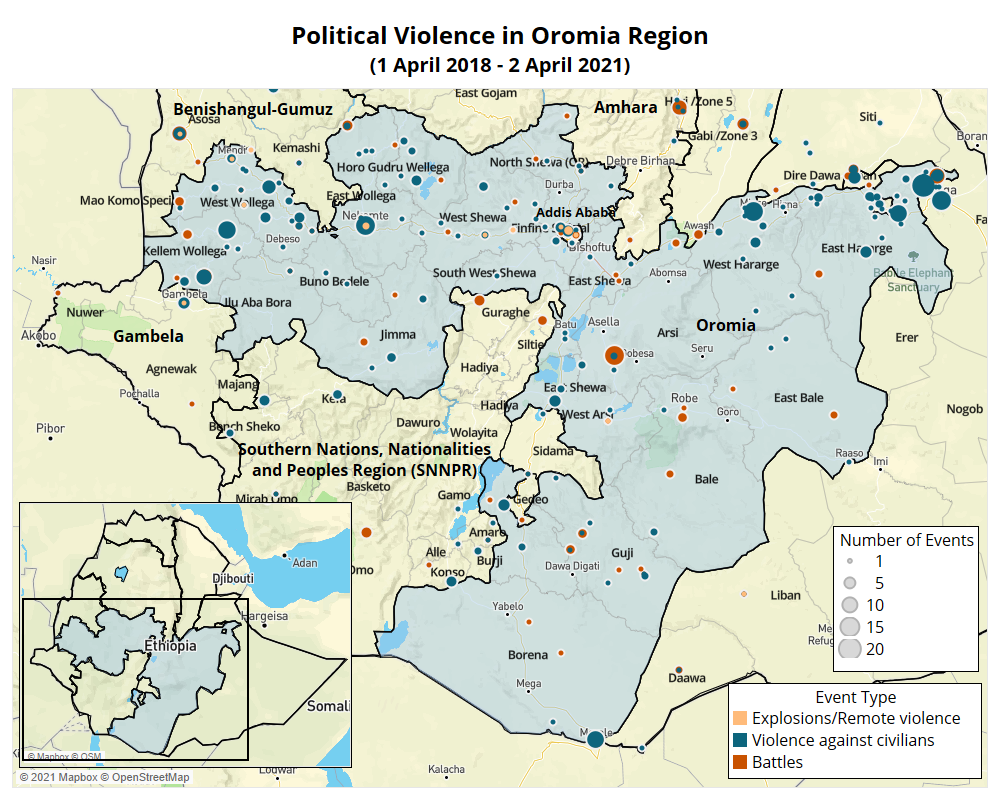 Oromia Region has been the site of anti-government protests and insurgency for many years. Mass mobilization through protests swept through the Region between 2014 and 2018, this movement was instrumental in bringing the current prime minister, Abiy Ahmed, to power. Despite having little in the way of set organizational structures, the ‘Qeerroo youth movement’ in Oromia Region were able to enforce economic strikes, hijack government-sponsored events, and disrupt government activities on a regular basis during the pre-Abiy years. All of this was done in the face of heavy repression from state forces, which only seemed to fuel the protest fervor whenever they engaged in disproportionate amounts of violence against protesters.

The Qeerroo is a broad term for a social movement that is not coordinated vertically/regionally/nationally, but manifest as local movements, predominantly composed on young men (but not exclusively) who appointed one or more local coordinators (i.e. not ‘leaders’) from the local area. The participants are motivated by (a) sense of Oromo grievance about exclusions and marginalization; (b) local politics and faultlines and (c) an engagement in redefining ‘Oromo-ness”. Yet this latter category has sub-regional distinctions, particularly amongst Shewa, Bale, Harar and Wollega Oromo who have distinct and hierarchical cultural and historical interpretations and understandings of Oromoness. These groups coalesced into a regional wide – but atomic- movement during the protests of 2014-2018; still without a leader. As a social movement with localized expressions, it is not an organization form that can be coordinated nationally.

At the outset of Ethiopia’s political change through Abiy Ahmed, a number of Oromo politicians and activists living abroad returned to Ethiopia and began to engage in politics. Among them were diaspora actors like Jawar Mohammed – self proclaimed leader of the “Qeerroo” –  who returned from Minnesota and joined with other Oromo federalist parties in the Oromo Federalist Congress (OFC). OFC leaders have since been jailed over their role in violent riots that occurred in June of 2020 and have dropped out of the 2021 election.

Also included in the political return was the Oromo Liberation Front (OLF), which fought an insurgency with the target of self-determination for the Oromo people from its base in Eritrea for nearly three decades. The OLF’s political “struggle” has since been marred with leadership crisis, and has dropped out of the election citing the arrest of members and the closing of political offices. Importantly, some commanders of the OLF viewed the transitional theatrics with distrust and opted to continue insurgent activity in the western part of the country. In an absence of political space for opposition figures, repressive violence during the election runoff period is to be expected. In a context where the legal and organized opposition failed to seriously challenge the regime, both extremist armed movements and youth riot/protest movements have emerged to contend where political parties failed.

Dynamics of political violence in the region are determined in two main violence types; battles being fought between government troops and splinter factions of the OLF dubbed “OLF-Shane” in the west of the Region as well as violence against civilians perpetrated mostly by state forces, including the Oromia Special Forces.

Active “hotspot” areas of conflict within the Oromia region include West and Kellem Wollega, West Guji, and East and West Hararge. Conflict dynamics in these specified locations are discussed in greater detail in their respective pages.

The Region is considered a vital and difficult area for political parties to carry in the June 2021 elections. However, the volatile and contentious politics of the Region prevents citizens therein benefitting from the size of the electorate. As Oromia is first and foremost recognized for the recent protest movement that upended power dynamics within the state, a brief on these patterns is below.

Protest Dynamics in the Oromia Region

By tracking all reported demonstration events in Oromia, EPO identifies three distinct phases that have shaped the region’s political environment.