Moyale is a border town that bridges Ethiopia’s Somali and Oromia Regions with Kenya. Oromo tribal lands are spread across the border. However, Moyale is administered by both Somali and Oromia Regional States. Moyale is geo-politically and economically important to both countries as a trade center with direct road access to both Nairobi and Addis Ababa. The area is inhabited by the Borana and Gabra clan of Oromo ethnic group, the Garri clan of Somali ethnic group with small numbers of traders from other ethnic groups of Ethiopia. The Borana, Gabra and Garri also live across the border in Kenya. These three clans are predominantly pastoralists. 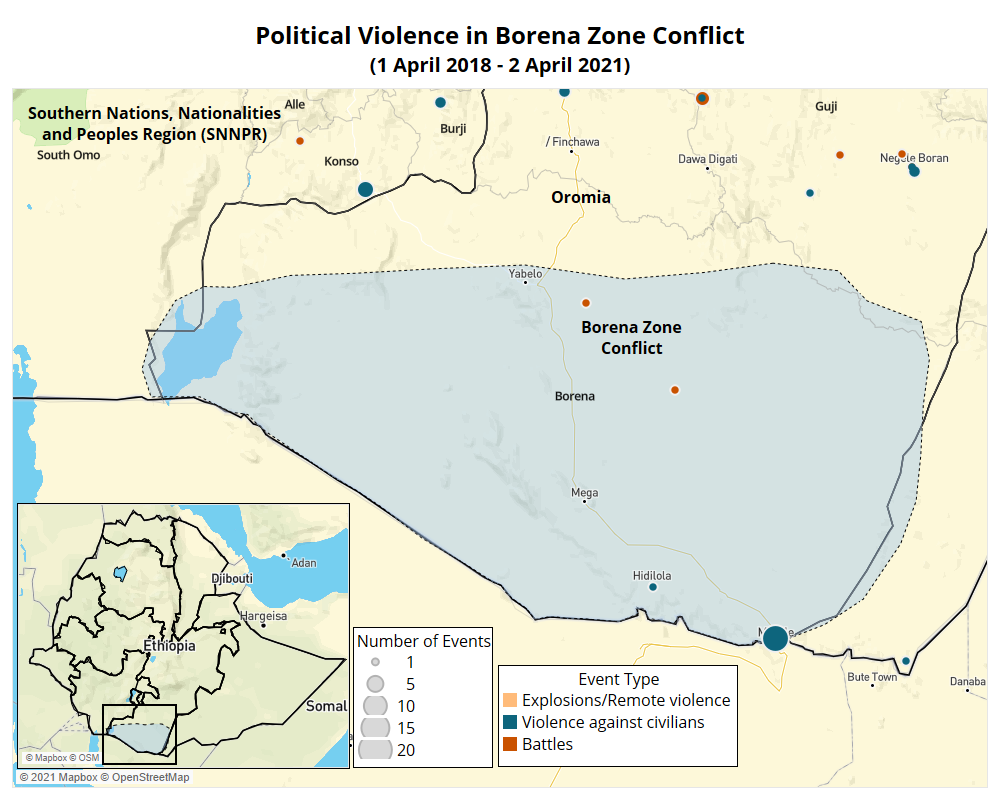 The conflict in this area is multilayered, and involves multiple competing actors including the Gabra, Noran and Garri groups. The main causes of conflict between the three clans are competition over access to land resources and stock raids. After the implementation of the 1995 FDRE Constitution, a border conflict along the Oromia and Somali Regions erupted as the Borana claimed their land as recognized under the Liban Zone of the Somali Regional State. Furthermore, the Gabra clan want to establish their own special Woreda within Borena Zone. The Oromo Liberation Front (OLF)’s splinter group, OLF-Shane is also active in the area.

Moyale is likely to see increased federal attention and repression due to its strategic location, presence of OLF militants, and violent conflict among the nomadic populations. This has already become a clear area of concern for the federal administration: at a recent meeting during the inauguration of the Moyale One-Stop Border Post (OSBP), on 9 December 2020, with the Kenyan President, PM Abiy requested Kenya’s assistance in combating the OLF-Shane militants along the border Region in a bid for increased regional security cooperation (BBC, 18 December 2020). PM Abiy has also attempted to sway the Oromo population away from the  the OLF-Shane through appeasing traditional Oromo leaders in the area – an initiative that appears to be working as the Abbaa Gadaa (the traditional leader) in Borena recently denounced the OLF-Shane as the ”enemy of Oromos” (BBC, 16 January 2021).

Moreover, what makes Moyale and the Borena area of Ethiopia more dangerous than other border areas of Ethiopia is its violent history. Similar to the West/East Hararge locations, Somali and Oromo clans have historically fought over land and resources in infrequent clashes. These clashes were intensified in 2017 under rising ethno-nationalist tensions and perceived state fragility, where actors became more involved in the national debate instead of local grazing conflicts. While intense state intervention will not be likely in this area, it will be an area of major concern for the Oromo state elites loyal to Abiy.