The Amhara Region in general has experienced little of the violence that has been occurring across the rest of the country. While the Region contains similar elements in terms of  conflicting political dynamics including rising ethno-nationalism and violent territorial agenda, Amhara ethno-nationalists have been placated due to recent events that have placed them in a position of favor in the national spectrum. Specifically, Amhara ethno-nationalist party agendas currently fall in line with the national efforts at removing the Tigray People’s Liberation Front (TPLF); and forces from the Amhara Region have gained control over historically-contested lands inhabited by ethnic Amhara in Western and Southern Tigray Zones, Tigray Region. 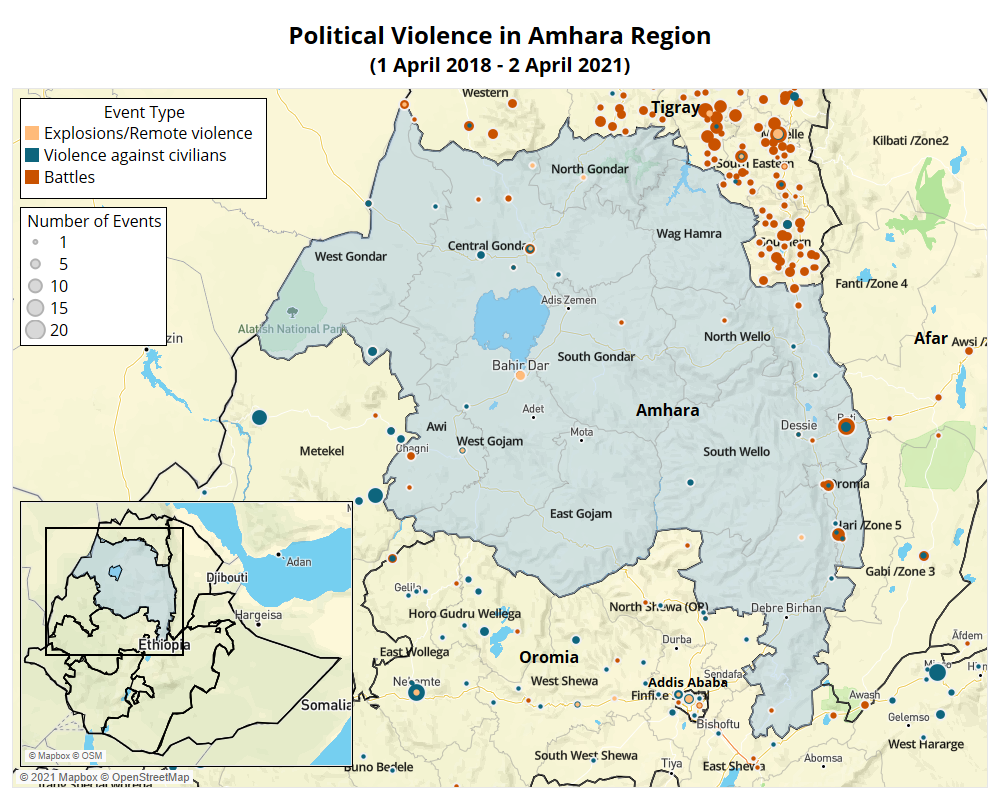 Like other regions in the country, the Amhara Region has its own Special Forces or “Liyu Hayl”, made up of ethnically-exclusive combatants that are loyal to the regional government. With ranks swelled during the 2018-2019 period in anticipation of conflict with Tigray forces, the Amhara Special Forces have recently gained real battle experience during clashes with the TPLF in Western Tigray and have become a powerful military force in the country. Often fighting alongside the Amhara Special Forces are Amhara ethnic militias, known as “Fano”, a legitimate militia which operate at the Kebele level and who form the lowest rung of the Ethiopian security ladder.

Although the Amhara Special Forces and Kebele “Fano” militias are regional forces, they are active in at least two conflicts outside of the Amhara Region. In addition to their activities in Western Tigray, Amhara Special Forces and Fano are actively fighting Sudanese Armed Forces along the border in an area known as Al Fashaga. After Sudanese Forces displaced Amhara farmers from the contested area, Amhara Kebele militias and Special Forces responded, attacking Sudanese Forces  and driving an intense border conflict (Sudan Tribune, 24 December 2020; Watson, 2021). See the Al Fashaga border dispute profile for more information.

These militias’ existence and power is political dynamite for the Abiy-led federal government as their agendas are not necessarily tied with those of the national government. Attempts by the federal government at removing Amhara forces from Western Tigray, for example, will likely be met with resistance, and Amhara Special Force’s activity in Sudan threatens to extend outwards into more formalized warfare.  Conflict in the Region will occur if a balanced alignment is not maintained between the Federal Government (espoused in the Prosperity-Party vehicle) and Amhara nationalist parties – namely the National Movement of Amhara (NaMA).

Areas in the Amhara Region inhabited by ethnic minorities have rebelled in alarm at rising Amhara nationalism, and clashes have occurred. Deep-rooted conflict occurs frequently in the Oromo Special Zone of Amhara Region, where Oromo ethno-nationalists clash with Amhara State Forces (for more, see the Kemise conflict profile). ACLED has also recorded a series of clashes between regional troops with Agew-Qemant ethnic militias in  2018. Banditry and smuggling in border areas with Sudan are common occurrences.

ACLED researchers are paying specific attention to rifts that have been exposed between the Amhara and Oromo Prosperity Party branches. If widened and continued, these contests for the direction and dominance of the Prosperity Party could throw the delicate balance between the two regions into a wild spiral with consequent violence that could even affect the capital.