Lt. General Abdel Fattah Al-Burhan, the head of Sudan’s ruling Sovereign Council, dispatched over 6,000 soldiers to the Ethiopian border at the start of the war in Tigray, as part of an agreement reached on 1 November 2020 that Sudan would close the borders “to prevent border infiltration to and from Sudan by an armed party” — referring to the TPLF (Sudan Tribune, 17 January 2021; see also Africa Confidential, 21 January 2021). These deployments placed Sudanese soldiers in an area of the border that has been historically contested, which runs along the international boundary between Gedaref state in Sudan and the Amhara and Tigray regions in Ethiopia. Negotiations in 2008 between the TPLF and Sudanese officials designated the land known as the Fashaga Triangle as legally Sudanese, but specified that Amhara farmers would be allowed to continue farming there (Asharq Al-Awsat, 12 April 2020). Amid periodic clashes and attacks in the area since 2014, this arrangement was finally dissolved with the deployment of Sudanese troops in November 2020. These forces have been accused of driving out Amhara farmers (and Tigrayan farmers in northern areas of Al Fashaga) after Amhara forces re-deployed to assist the federal government in the war against the TPLF in the northern Tigray region (Addis Standard, 28 December 2020). Amhara regional militias and Liyu Police (sometimes referred to as ‘Special Forces’/Liyu Hayl or as Amhara Regional Forces) have since responded, attacking Sudanese forces in areas occupied by Amhara farmers since the mid-1990s (for more, see this ACLED report). 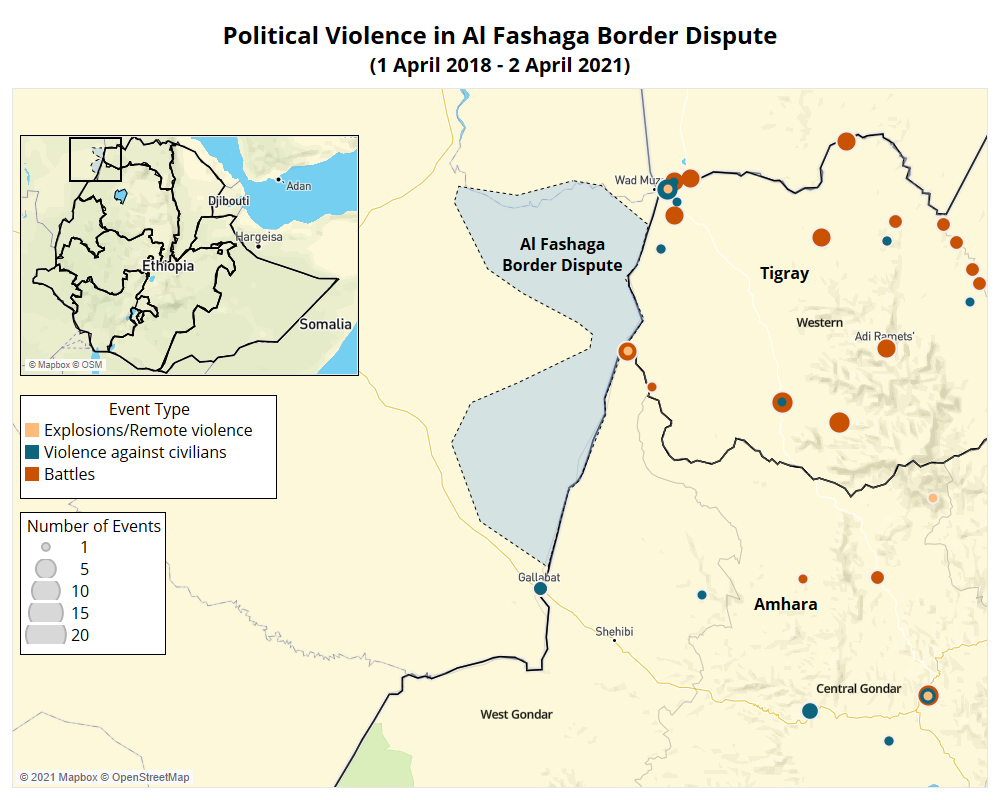 These actions have placed Ethiopian Prime Minister Abiy Ahmed in a difficult position. On the one hand, Abiy depends on his alliance with the powerful Amhara elite to continue military operations in the Tigray region. On the other, he can hardly afford an international conflict that would certainly involve other actors like Egypt given contestations over the Grand Ethiopian Renaissance Dam (GERD).

It is likely that the leadership of the Sudanese army is utilizing the conflict for internal political gain, and is unlikely to be as invested as it claims it is in the actual matter of land ownership. Whilst this would suggest that neither Khartoum nor Addis has an interest in escalating the fighting, there is a risk that continued conflict will generate its own momentum and logic. Furthermore, the support of hardline Amhara nationalists and the prominent role of Amhara Liyu Police and militiamen (see below) has the potential to keep the conflict burning, or to force events along without approval from the federal government, and with unpredictable consequences. The rich agricultural area sits atop a number of important trade and smuggling routes, which has so far received limited attention in most reporting. Such networks appear to be in flux due to fighting in Al Fashaga and western Tigray, and the effects these conflicts are having for the profitability of these networks is yet to be established. It is presently unclear whether the licit or illicit trade is more valuable, and to whom.

The conflict is primarily being fought between infantry from the Sudan Armed Forces (SAF) and SAF ‘reservists’ (who appear to be paramilitaries mobilized from the area) against infantry from the Amhara Liyu Police often operating alongside local Amhara militias. Militiamen who work with the Amhara Liyu Police are typically part of the legitimate, semi-regular militia which operate at the Kebele level, and who form the lowest rung of the Ethiopian security ladder (Bruce Baker, 2013: 301-302).  Criminal and vigilante militias also operate from Amhara-occupied regions, and these are likely to be involved in the majority of abductions, cattle-raids, and attacks on Sudanese civilians and farmers in the areas surrounding Gallabat town, around the southern edges of the disputed area. These different types of militia groups are often conflated together, or described as ‘Shifta’ in the Sudanese media, connoting activity by bandits. There have been reports of shelling (probably using mortars, being used by SAF and non-militia Ethiopian forces), but no verified accounts of strikes by helicopters or aircraft. There are numerous reports of farming machinery being looted by Amhara militias, and more recent reports suggesting that SAF have also been engaged in looting of both Sudanese and Ethiopia farm equipment in Western El Gallabat locality and in the Fashaga triangle.

External media coverage has tended to conflate the Amhara Liyu Police with federal soldiers from the Ethiopian National Defence Forces (ENDF). There is some evidence to suggest that the ENDF has been involved in the conflict, although the capacity in which they are doing so is unclear. It is likely that they have had a peripheral role in the actual fighting, and there are few specific or verifiable accounts indicating they have crossed the internationally recognized boundary into Sudan after hostilities began (there was a prisoner exchange in which Sudanese news reported that ENDF soldiers were handed over, although it is possible that Sudanese news has mistaken ENDF for Amhara Liyu Police). There are frequent claims of troop build-ups on both sides of the border, although precise information on the actual size of these forces is lacking. In some cases, troop deployments may not be directly related to the border fighting, and may instead be linked to military operations in western Tigray, and more recently to efforts by Amhara Liyu Police to forcibly relocate Tigrayan civilians to central Tigray.

It is not clear how many have been killed and wounded in the conflict, although when casualties have been reported they tend to be low (usually in single digits), and such reports are infrequent. Ethiopia has claimed that many Amhara civilians were killed when SAF first entered the disputed areas in November 2020, although there is no verifiable information on where these killings took place or how many were killed. In recent weeks, fighting has clustered in the Barakhat area of ‘Greater Fashaga’ (which broadly corresponds to areas of Al Fashaga locality east of the Atbara river), which is now being described as the last Ethiopian stronghold in the locality. This has followed from a string of territorial acquisitions by SAF, whilst in ‘Lesser Fashaga’ to the south fighting has been reported in several locations, with cross-border shelling near Abdel-Rafi on the Ethiopia side. Whilst military clashes are clustered in the northern half of the Fashaga triangle, there are sporadic reports of attacks and abductions (often for ransom) of Sudanese farmers in Eastern El Gallabat and Basundah localities to the south, although it should be noted these attacks have preceded the current conflict by several years. There is increasing discontent at these attacks by Sudanese residents of the area, who blocked the border at Gallabat town in late January in protest at abductions and killings.

After weeks of rumours, two UN OCHA humanitarian updates for Tigray confirmed the presence of Eritrean forces in the Barakhat area (see UN OCHA, 13 March 2021; UN OCHA, 22 March 2021). These bulletins also noted that clashes between SAF and unspecified Ethiopian forces (likely Amhara Liyu Police) operating alongside Eritrean forces took place in early March. Recent reports indicate that SAF and SAF ‘reservists’ clashed with Amhara militia in southern Basundah locality (outside of the disputed area) on 24 March (Sudan Tribune, 25 March 2021). Clashes in Wad Kholy in El Quresha locality were reported on 28 March, and again in an unspecified area a day or two later (Sudan Tribune, 28 March 2021; Sudan Tribune, 30 March 2021). These reportedly involve attempts at dismantling people smuggling networks, although the relationship between these specific networks and parties to the conflict is unclear at this time. On 3 April, Sudan closed the border crossing at Gallabat town, amid objections from local Ethiopian officials. This closure followed an attack on Sudanese customs agents two days before (Sudan Tribune, 4 April 2021). The border appears to have been re-opened shortly afterwards, and with a greater SAF presence, though clashes occurred in a nearby area to the north-west, in which SAF and ‘reservists’ clashed with Amhara militiamen who were protecting farmers, and torched a settlement (Sudan Tribune, 6 April 2021).

Whilst Sudanese forces appear to have taken most of the disputed territory, there are fears that conflict may widen outside of these areas. In addition to fighting in Basundah locality, on 8 February unspecified Ethiopian soldiers were reported to have attacked SAF forces near Jabal Halawa in El Dindir locality of Sennar state, killing a Sudanese officer. This area sits on the Sudan-Ethiopia border, and is close to the internal Sudanese border between Sennar and Gedaref states. Clashes involving SAF and SAF ‘reservists’ against Amhara militia also took place on 29 March during a Sudanese attempt to demarcate the border, resulting in two fatalities (Sudan Tribune, 29 March 2021). In early March, SUNA (the official Sudanese media outlet) announced that Sudanese Military Intelligence had uncovered linkages between Lt. Gen. Joseph Touka Ali of the Sudan People’s Liberation Movement – North (Abdelaziz al-Hilu faction) and the Ethiopia government. The report claimed that Addis had supplied Joseph Touka – who is an ethnic Uduk commander from Blue Nile state, and second-in-command to Abdelaziz – with weaponry at the Khor Yubus area in the far south of Sudan’s Blue Nile state, supposedly in a bid to allow Ethiopia to claim the disputed town of Kurmuk (see Ayin Network, 8 March 2021). It is doubtful that Joseph Touka would seek to hand Kurmuk (the historic stronghold of the SPLM-North in Blue Nile) to Ethiopia, and the agenda of SAF Military Intelligence (which has in the past acted as an autonomous entity in Sudan’s sprawling military apparatus) in this matter is unclear. After some delay, a statement emerged from Joseph Touka denying the claims (see Sudan Tribune, 16 March 2021).

Belligerent rhetoric from elements of the political establishment in Khartoum and Addis has encouraged fears of an intensification of the conflict, amid mutual accusations of third-party involvement (see Africa Confidential, 22 February 2021). Sudan has periodically called for the United Nations to replace Ethiopian peacekeepers stationed in the disputed Abyei area along the border with South Sudan, most recently stating they should be replaced with those of a different nationality (Sudan Tribune, 7 April 2021). This modifies earlier Sudanese statements which claimed the situation had improved in Abyei to the extent that peacekeepers were no longer required. On 23 March, Abiy stated that Ethiopia believed neither country could sustain war (AFP, 23 March 2021), whilst Khartoum has responded by promoting an Emirati mediation proposal. Current (uncorroborated) information suggests this plan would involve Emirati investment in agriculture in the disputed area, which would employ farmers from both Sudan and Ethiopia (Sudan Tribune, 26 March 2021). If true, this could make forces directly under the control of Khartoum and Addis wary of taking actions that damage Emirati assets. However, it is not clear how such a plan might affect the economic interests of commercial farmers or smugglers, and satiating these constituencies on both sides of the border may be necessary to a longer term de-escalation of the conflict.