The Somali Regional State is the second largest Region of the country next to the Oromia Regional State. The Region shares borders with the Afar Region, Oromia Region and Dire Dawa to the West, Djibouti to the North, de facto state Somaliland to the North-East, Somalia from East to South, and Kenya to the South-West. The Region is predominantly inhabited by the Somali ethnic group, but it is ethnically heterogeneous. Moreover, the Somalis in Ethiopia have social and political links with other ethnic Somalis in the neighboring countries, as in Somali culture, clan links are the most important social and political unit of organization. According to the last official census conducted by the Federal Government of Ethiopia in 2007, the Somali ethnic group is the third-largest ethnic group in the country (FDRE Population Census Commission, 2008). By 2017 it is estimated that the population in the Somali Region is around 5.7 million (FDRE Central Statistical Agency, 2013 Population Projection of Ethiopia for All Regions At Wereda Level from 2014 – 2017).

The capital city of the Somali Regional State is Jijiga. The Region is divided into nine Zones and 53 Kebeles. These nine Administrative Zones are Shinile, Jijiga, Degehabur, Warder, Korahe, Fik, Gode, Afder and Liben. However, since the establishment of ethnic federalism divisions in 1994, the Region disputes several borders with Afar and Oromia Regional States. With the Oromia Region, there were border disputes over 420 Kebeles (BBC, 2017), and to resolve these disputes, a referendum was held in 2004 with 80% of these Kebeles under the Oromia Regional State. However, the demarcation is not implemented in most areas. Thus, there are violent disputes at the borders of the two Regions.

Similarly, the Somali Region has border disputes over three Kebeles located in Afar’s zones 1 and 3 and Somali’s Sitti Zone of Adaytu Kebele of Mille Woreda, Undufo Kebele of Gewane Woreda, and Gedamaytu Kebele of Amibara Woreda. The Issa clan, which inhabits these areas, wants to be part of the Somali Regional State of Ethiopia while the Afar Regional State considers the area as an integral part of the Afar Region. Even though an agreement between the two Regional States has been signed in recognizing the three Kebeles as special Kebeles within the Afar Regional boundary, the elders of the Issa Clan (Ugaz) oppose this agreement. Hence, the conflict is still ongoing.

Ethiopia’s Somali Region has long been associated with significant levels of violence, both from contests between the former rebel organization Ogaden National Liberation Front (ONLF) and the federal government, and from local ‘clan’ conflicts that cross domestic and international borders. Recently, however, after the disarming of the ONLF and the arrest of former regional president Abdi Mohammed Omer in August of 2018, levels of violence in the region have dropped significantly.

Historically conflict on Somali Region’s borders is common, and could be another potential cause of violence that spreads beyond local disagreements. In preparation for the 2021 national election, 8 Kebeles listed by the National Election Board of Ethiopia have been labeled as conflict-prone and contested by the Afar and Somali Regions (for more details see Afar-Somali Border conflict page). Protests have already occurred in areas of Sitti Zone in response to NEBE’s decision regarding the contested Kebeles participation in the upcoming elections (Voss TV, 26 March 2021; Voss TV, 28 April 2021a; 28 April 2021b). 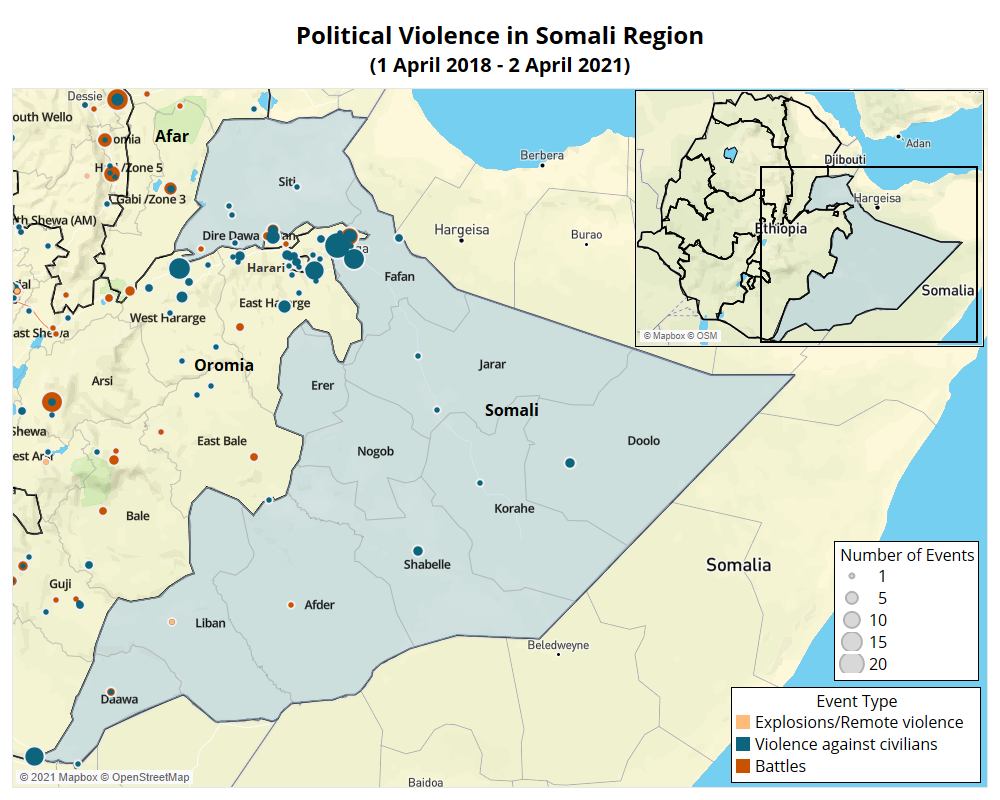 As the rest of the country celebrated the fall of the TPLF and a perceived opening of political space and newly found freedoms, Ethiopia’s Somali Region remained under the thumb of strongman Abdi Mohamed Omar ‘Iley’ (known as Abdi-Illey) and the infamous Somali Special Forces/Liyu Police, who were accused of engaging in abuses of the civilian population as they had battled ONLF forces. Protests by residents of the Region who opposed his mis-rule erupted throughout April, May, and June of 2018 and culminated in three days of intense violence in the regional capital of Jijiga.

On 3rd August, clashes broke out between the Ethiopian military and Liyu Police in Jijiga town, amidst reports that government troops had been deployed to arrest local politicians, in a stand-off with Somali Regional President Abdi Illey. The military occupied a number of key sites throughout the town. Over the next two days (August 4th and 5th), a group of youth organized as ‘Heego’ and allegedly supporting controversial regional President Abdi Illey, reportedly burned down several churches and looted shops and banks. Some reports indicate that the Heego attacked non-Somalis, particularly Oromos, in the town. Over the three days of violence, 29 people were reported to have been killed. Abd Illey was arrested and a new regional president was confirmed (Tobias Hagmann and Mustafe Mohamed Abdi, April 2020).

Since the removal of Abdi Illey, the Region has been peaceful. Yet, tensions could be building. Somali Region appears to be running up into a truly contested election, with ONLF candidates running as the ethno-nationalist party against the Prosperity Party associated with Prime Minister Abiy Ahmed. Violent events recorded by ACLED in the runup to the election have included beatings, arrests, and intimidation by regional forces against ONLF candidates. If the election is not perceived as fair and the ONLF loses, post-election violence in the Region is a possibility, especially in the Ogaden region where the ONLF is especially popular.

The Ogaden National Liberation Front (ONLF) was established in 1984 after Somalia President Siyad Barre’s attempt to establish a ‘greater Somalia’ failed. It emerged from a group that split from the Western Somali Liberation Front (WSLF), which had originally begun an armed struggle to establish an independent, ‘greater Somalia’ by re-uniting all members of the Somali ethnic group. As a splinter group, ONLF’s objective was to establish an independent Ogaden, although the parameters of secession from, or autonomy within, Ethiopia remains unclear (Tobaias Hagmann, 2014). The front’s major support comes from the Ogaadeeni clan, estimated at between 40 to 50% of the Somali region’s population (Tobaias Hagmann, 2014). However, most not belonging to the clan do not support the objective of ONLF, in part due to  Ogaadeeni clan domination (Tobaias Hagmann, 2014).

When EPRDF came to power in 1991, ONLF ruled the Somali Region. Due to a lack of regional autonomy, ONLF leaders wanted to hold a referendum on the self-determination of the Region. The federal security forces intervened, arrested ONLF leaders, and closed their office; the remaining ONLF members have fought the federal government since 1994. The counter-insurgency by the Ethiopian government caused many civilians to be mistreated, displaced, and extra-judicially killed (Human Rights Watch, June 2008).

Following Prime Minister Abiy’s invitation to various armed opposition groups to return to Ethiopia, ONLF returned to the Region after 24 years of armed struggle. Under the Joint Declaration (2018), ONLF and the government agreed to stop hostilities against each other, and allowed ONLF to peacefully peruse its political objectives by respecting the constitution and “to establish a joint committee to further discuss substantive issues pertaining to the root causes of the conflict in the region through continuous engagement inside the country” (Joint Declaration Between the Federal Democratic Republic of Ethiopia and the Ogaden National Liberation Front, 21 October 2018). Before signing this agreement, the two parties were conducting negotiations for six years.

ONLF leaders returned to Somali Region in December 2018 and demobilized its fighters. The Somali Regional State President was to implement the joint declaration. However, the ONLF party leaders “thought they could renegotiate the region’s political architecture and secure their organisation a prominent position” directly with the federal government (Tobaias Hagmann, September 2020, p.5). This created tension between the newly established Somali Region´s ruling party, the Somali Democratic Party (SDP), and ONLF. Nevertheless, in June 2019, a Joint Committee of the Somali Regional Government and the ONLF was established (Aden Abdi, October 2019).

In 2019, ONLF registered as a political party to participate in Ethiopia’s upcoming sixth general election. At the beginning of 2020, violent conflict erupted in Afdheer, Eel Ogaden and Korahe areas when Somali Regional State officials tried to stop members of ONLF from putting up the party’s flag at the newly established ONLF offices (Aden Abdi, October 2019). For the upcoming election, it is likely that the candidates running on the ONLF ticket will be  strong contenders against the region’s Prosperity Party branch. An intense election period is expected.