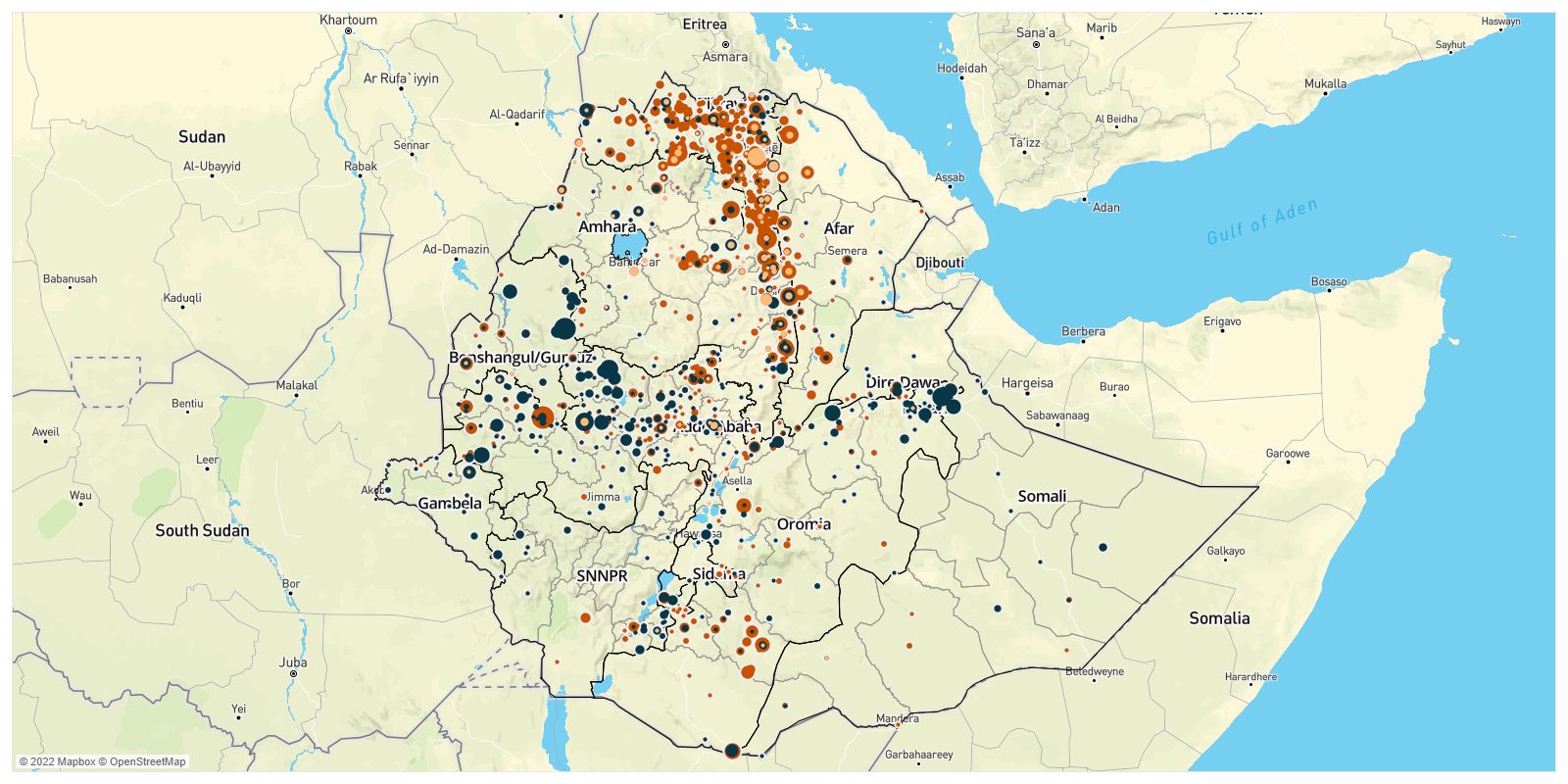 By the Numbers: Ethiopia, 16-22 July 2022 2Some events from this coverage period might be included in the data in subsequent weeks due to reporting delays. 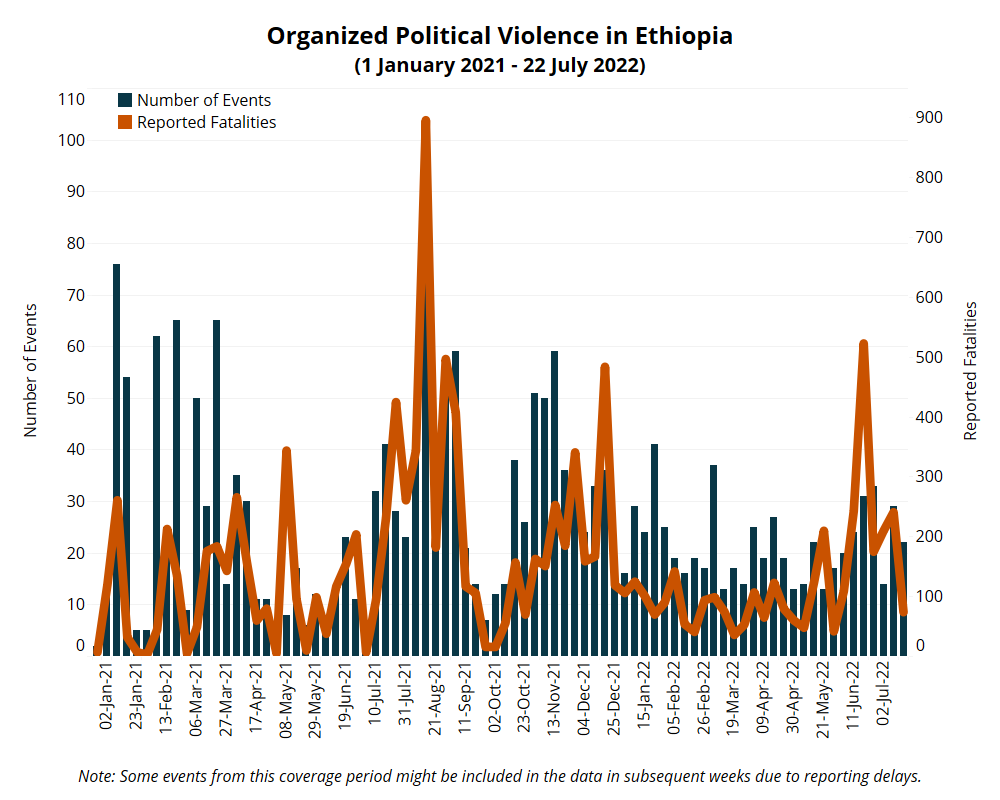 Ten violence against civilians events were also recorded in the region last week (see map below). From 17 to 19 July, the OLF-Shane attacked civilians in Amuru woreda in Horo Guduru Wollega zone, killing and abducting an unidentified number of people. Moreover, government forces were implicated in six recorded attacks against civilians. They shot and killed over a dozen of civilians in West Arsi, East Wollega, West Wollega, South West Shewa, and West Shewa zones. Some of the victims were accused of either having links with the OLF-Shane or supporting the group, while the reason behind the killing of the others is unknown. Moreover, on 18 July, Somali ethnic militiamen from Somali region attacked Oromo civilians in Guradamole woreda in Bale zone, displacing the residents of the woreda. 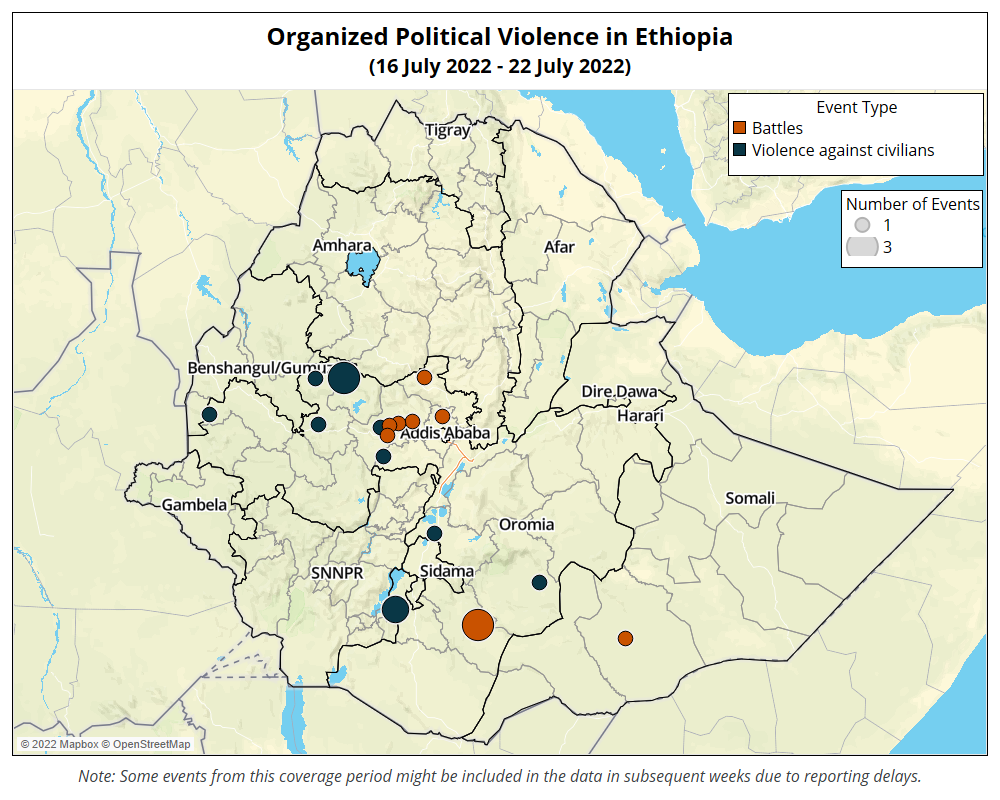 Lastly, the Federal Security and Safety Joint Task Force released several press statements regarding the country’s current situation. The Task Force announced that security forces had arrested 454 people, including 174 members of the Tigray People’s Liberation Front (TPLF), 98 members of the OLF-Shane, 51 members of Fano militias, and 100 suspects accused of conspiring to incite violence in an unspecified location in the capital, Addis Ababa. The government also claimed to have arrested 31 members of Al Shabaab and Islamic State who were allegedly planning to carry out attacks in Addis Ababa and the surrounding areas (BBC Amharic, 23 July 2022). Additionally, the Joint Task Force stated that from 14 June to 14 July,  ENDF, federal police, and Oromia regional special forces undertook joint military operations against the OLF-Shane in Gimbi woreda in Oromia region, killing more than 153 and capturing over 900 members of the rebel group (Ethiopian Federal Police, 23 July 2022). On 18 June, the OLF-Shane attacked civilians in Gutu, Cherkosa, Silsaw, Begene, Chakaw sefer, and Hayaew areas in Tole kebele in Gimbi woreda in West Wollega zone, killing at least 338 civilians, mostly ethnic Amharas (see EPO Weekly: 18-24 June 2022 for more information).

Last week, Al Shabaab and Somali regional special forces engaged in multi-day clashes in Hargele woreda in Afder zone in Somali region in Ethiopia, in addition to a couple of locations – Yeed and Ato – on the Somali side of the border. On 22 July, regional special forces besieged Al Shabaab militants in Holdhir area in Hulul in Hargele woreda, reportedly “destroying” the group (Somali Regional State Communication Bureau, 23 July 2022). At least 17 people, including three civilians and Ethiopian police officers, as well as over 100 members of Al Shabaab were reported killed during these clashes (FDRE Government Communication Service, 27 July 2022; VOA Amharic, 26 July 2022; Reuters, 22 July 2022). These incidents followed clashes between regional special forces and around 60 members of Al Shabaab a week earlier, on 14 July, during which an Al Shabaab commander was killed around Bula mountain in Elkare-Serer woreda in Afder zone. A few days later, the federal government announced the arrest of several Al Shabaab militants as they were allegedly planning to carry out attacks in Addis Ababa.

Attacks involving Al Shabaab are relatively rare in Ethiopia, despite a lengthy border with Somalia where the militant group is active. This is mostly due to the presence of Somali regional special forces, sometimes called by their Amharic term “Liyu Hayl” (for more details on this actor, see EPO’s Actor Profiles pages: Police Force of Ethiopia (2018) Liyu Police and Police Force of Ethiopia (2018) Somali Regional Special Forces), who are also deployed inside Somalia as part of the African Union Transition Mission in Somalia (ATMIS) (Long War Journal, 25 July 2022). Despite their effectiveness, Somali regional special forces have been accused of serious human rights abuses in both Somalia and Ethiopia (Human Rights Watch, 20 August 2018). ENDF soldiers are also present in Somalia, and more have been deployed to the border area since the latest round of clashes.

Ethiopian forces have a long history in Somalia and have played a major role in the country since federal and regional special forces entered Somalia in 2006 as part of a US-backed effort to topple the Union of Islamic Courts. The capacity of Ethiopian forces in Somalia is thought to surpass even that of the Somali National Army (SNA) or police forces (Brookings, 20 November 2020). The withdrawal of thousands of Ethiopian troops from Somalia in 2020 following the outbreak of conflict with the TPLF raised concerns of a “security vacuum” that would allow Al Shabaab to expand (Bloomberg, 13 November 2020), further highlighting the importance of Ethiopian forces in fighting the Al Shabaab insurgency in Somalia.

The resurgence of political violence by Al Shabaab in Ethiopia over the past two weeks marks a new level of engagement, as events involving Al Shabaab militants are extremely rare in Ethiopia. It is possible that some previous priorities – like securing the country’s eastern border – has become less important and security resources have been reallocated to areas of the north of the country, exposing the country to attacks by Al Shabaab. The group’s incursion into Ethiopia, however, has had varied results. As a repercussion to recent Al Shabaab activity, there is a concern throughout the country given the state of Ethiopia’s internal affairs and Ethiopian forces’ preoccupation with other security matters that such cross-border attacks might increase in the future.

However, heightened Al Shabaab activity might play into the government’s favor both internally and externally. Ethiopia’s federal government is facing internal pressure for its failure to properly address security concerns in Oromia and Tigray regions, and it needs a way to swing public support back into its favor. Defeating an Al Shabaab incursion demonstrates the effectiveness of Somali regional special forces in combating militant groups, a task special forces from other regions have not done well. A statement released by the Somali regional state last week made an attempt to link the clashes with Al Shabaab and the security situation in the rest of the country in what appears to be a bid for public support. In this statement, government officials claimed that Al Shabaab militants “wanted to join the OLF-Shane in the bordering Oromia region,” an interesting claim given that the two groups have completely different motives and no history of operating together (Somali Regional State Communication Bureau, 23 July 2022).

Internationally, a revived Al Shabaab threat also highlights the reliance of the international community on Ethiopian forces in combating radical Islamic groups in Somalia. As pressure has mounted on the Ethiopian government to address reports of human rights abuses committed by its troops in Tigray and Oromia, it is likely that it has felt a need to remind the international community of its historic contributions toward combating Al Shabaab in Somalia. The group’s incursion into Ethiopia has provided it with an opportunity to showcase its role in countering the Al Shabaab insurgency.

Nonetheless, the resurgence of political violence by Al Shabaab in Ethiopia is concerning. It highlights a continued trend of expansion by the group into a potentially receptive region of Ethiopia. Despite these concerns, reports of the defeat of Al Shabaab in Ethiopia demonstrate the capability of the Ethiopian security forces and their ability to address security concerns on the eastern border, which could boost much-needed support for the government throughout the country.