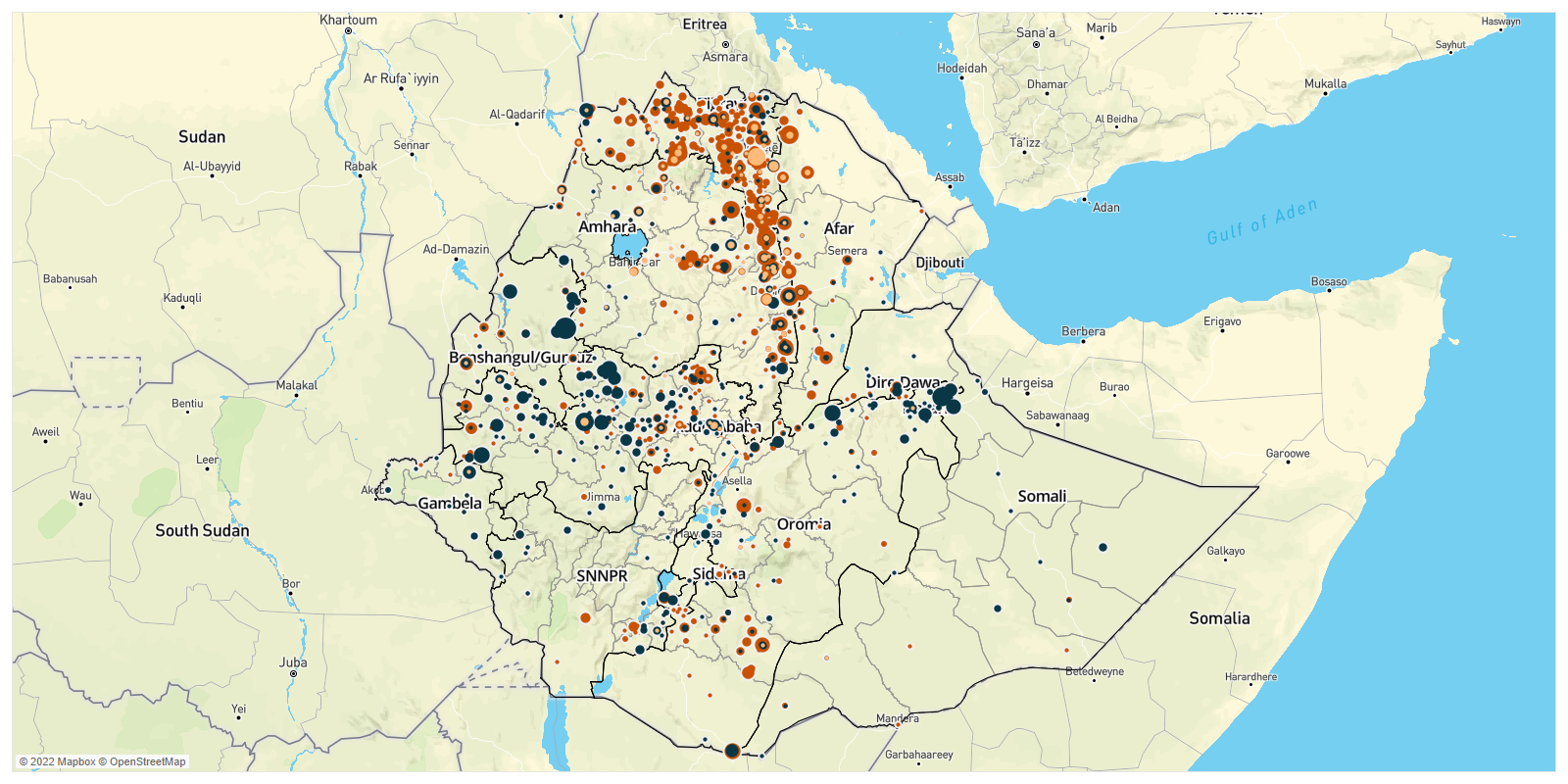 By the Numbers: Ethiopia, 18-24 June 2022 2 Some events from this coverage period might be included in the data in subsequent weeks due to reporting delays. 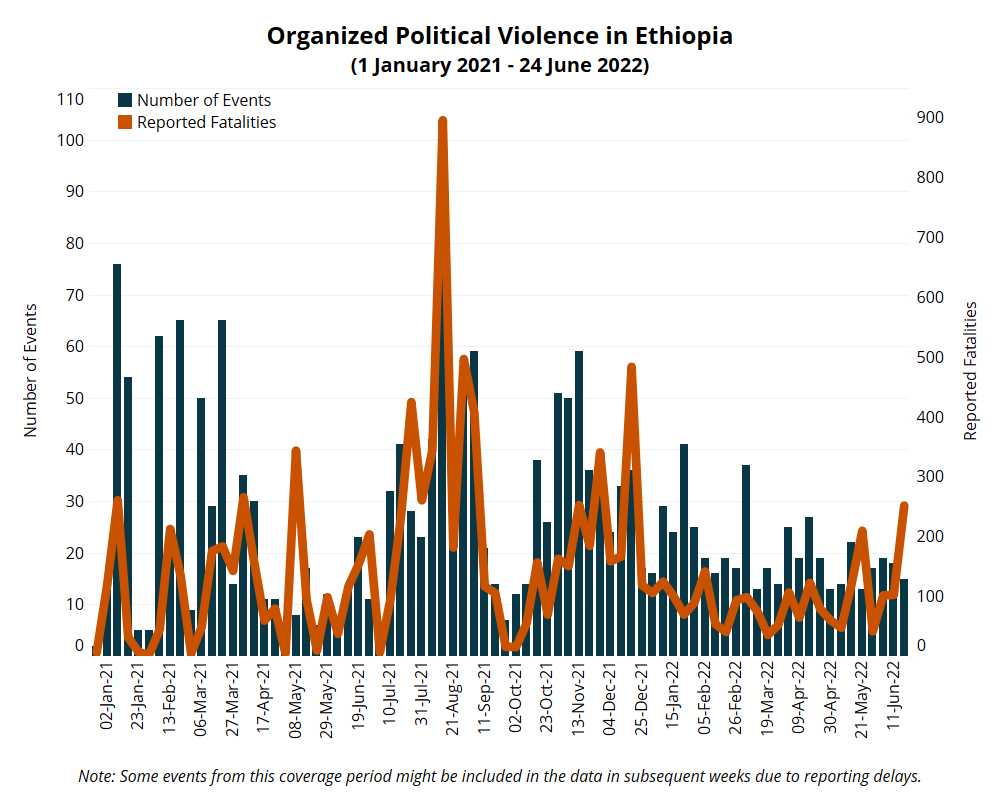 Armed clashes and violence against civilians continued in Oromia region last week. Fighting between Oromo Liberation Front (OLF)-Shane and Ethiopian National Defense Force (ENDF), federal police, and Oromia regional special forces were recorded in various zones of the region. Clashes between the OLF-Shane and ENDF were registered in Dire Incinni and Bilo Abeyi towns in Tikur Enchini woreda, Wanji in Jibat woreda in West Shewa zone, and Hose kebele in Wara Jarso woreda in North Shewa zone. The OLF-Shane also fought against ENDF and Oromia regional special forces in Derba town in Sululta woreda in Finfine special zone. Around 22 June, members of the OLF-Shane ambushed a convoy of Oromia regional special forces in Gamo Jibat in Jibat woreda in West Shewa zone. The group claimed to have killed five and wounded an unknown number of soldiers. The rebel group also clashed with members of the ENDF and federal police in Chelenko in Hidabu Abote woreda in North Shewa zone on 24 June. The fighting occurred after members of the OLF-Shane stopped at least one truck and four buses transporting civilians from Gundo Meskel to Addis Ababa in Wezemi village near Ejere town in Hidabu Abote woreda in North Shewa zone and diverted them to an unknown location, abducting around 370 people. ENDF and federal police forces entered the area, clashed with the rebel group, and managed to rescue 360 hostages. Ten individuals, including two investors, were reported to be still held by the group.

Last week, two incidents of attacks against civilians were recorded in Oromia region. On 24 June, Oromia regional state police and Oromia regional special forces shot and killed three people in Gurura town in Goro woreda in South West Shewa zone for an unknown reason. A second attack, which occurred in Tole Kebele of West Wollegga zone, is discussed below in the Weekly Focus.

In the meantime, several battle events involving Tigray People’s Liberation Front (TPLF) forces were recorded in both Amhara and Tigray regions (see map below). Around 22 June, the TPLF and ENDF clashed around Waja area in Raya Alamata woreda in Southern Tigray zone in Tigray region. TPLF forces had overtaken the area on 8 June after Fano militiamen withdrew following the recent “law enforcement operation” in Amhara region (for more on the “law enforcement operation,” see EPO Weekly: 21-27 May 2022). However, when Fano militia members began to re-enter the area on 11 June, TPLF forces withdrew without any violence reported. In Amhara region, TPLF forces and Fano militias clashed in North Wello zone. On 22 June, TPLF forces clashed with Fano militias in Jerota kebele in Raya Kobo woreda in North Wello zone, gaining control over the kebele, including the surrounding Arengebo, Ageda, and Addisu villages, shortly after the fighting. An unknown number of people were killed and injured due to the clashes, and more than 160 people were forced to flee the area. TPLF forces also looted civilian assets. Additionally, on 22 and 23 June, the two groups engaged in clashes in Wetwet kebele in Gidan woreda in North Wello zone. From 23 to 25 June, TPLF forces clashed with the ENDF, Amhara, and Fano militias in Semiza Giorgis, Mekenet Garia, and Jan Amora kebeles in Kobo woreda in North Wello zone, taking control of these kebeles shortly after. At least 10 people were reportedly killed (Addis Maleda, 25 June 2022). 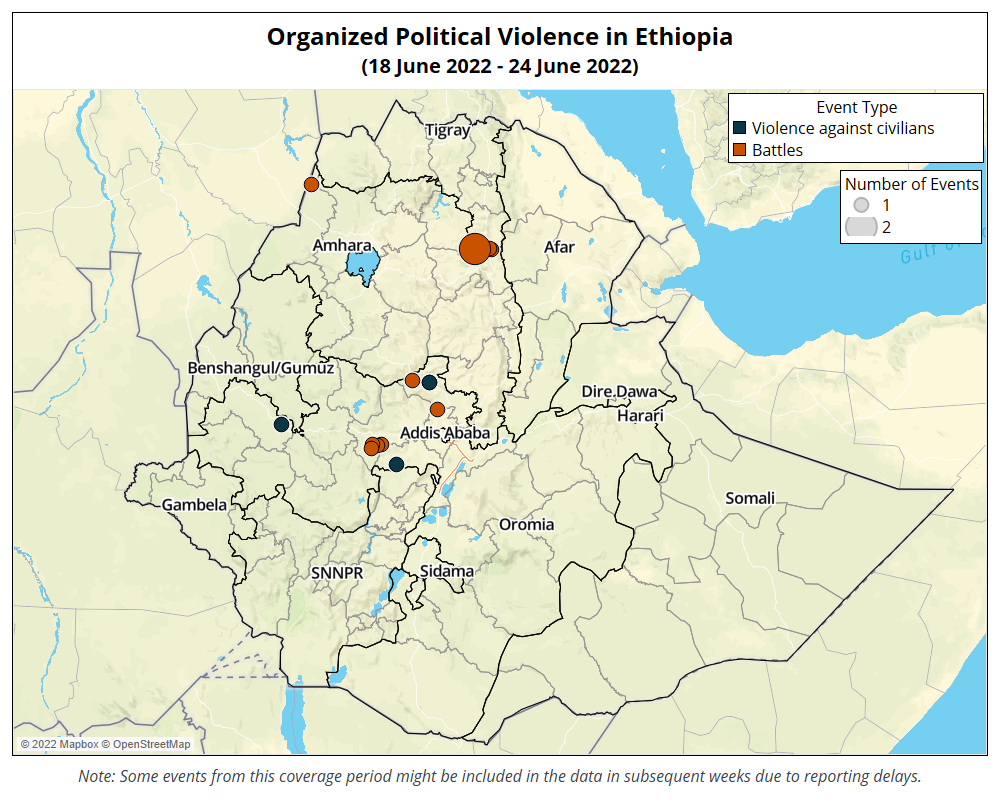 Further, on 22 June, the Sudan Armed Forces (SAF) and unspecified Ethiopian forces clashed in an area east of Al Asira in Al Qureisha locality in the disputed Al Fashaga region. One SAF member was injured while seven others were reported missing (Sudan Tribune, 23 June 2022). On 27 June, the government of Sudan accused the ENDF of killing the SAF captives and one civilian (BBC Amharic, 27 June 2022). The Ethiopian government and ENDF denied this claim stating that the ENDF is not present in the area (The Ministry of Foreign Affairs of Ethiopia, 27 June 2022; DW Amharic, 28 June 2022).

Last Week, on 22 June, the TPLF prevented planes carrying humanitarian aid from landing at Mekelle airport, citing a shortage of fuel, while trucks carrying humanitarian assistance through the Abala (Afar) to Mekelle corridor continue to deliver aid to Mekelle, the capital city of Tigray region (FDRE Government Communication Service, 23 June 2022; VOA Amharic, 22 June 2022). In the last couple of months, planes carrying humanitarian assistance flew to Mekelle every day. The federal government refuted the TPLF’s claim of fuel shortage stating that “the myth of fuel shortage is a TPLF hidden agenda to enhance mobility of its army in preparation for another round of conflict” (FDRE Government Communication Service, 23 June 2022). However, on 23 June, after holding talks with the World Food Programme (WFP), the Ethiopian government agreed to allow two million liters of fuel into Tigray region to be used for distributing humanitarian aid within the region (BBC Amharic, 23 June 2022).

In Gambela region, on 19 June, a group of people who are considered ‘non-indigenous’ to the area – Degegnoch – held a protest in Gambela city against the killings of civilians from ‘non- indigenous’ ethnic groups in the town. Protesters called on the government to hear their voices and protect them. ENDF and regional special forces opened fire at demonstrators. Casualties are unknown. Following the armed clashes between OLF-Shane, Gambela Liberation Front (GLF), and government forces in the city on 14 June, security forces, assumed to be Gambela regional special forces, reportedly shot and killed at least 10 ethnic Oromo civilians in Gambela (for more details, see EPO Weekly: 11-17 June 2022 and EPO Weekly: 4-10 June 2022).

Lastly, a traditional peace and reconciliation ceremony was held in Wemebera woreda in Metekel zone in Benshangul/Gumuz region. Selected elders from 11 kebeles of Wemebera woreda came together for the ceremony (Fana Broadcasting Corporate, 24 June 2022). Metekel zone is one of the volatile areas in Ethiopia (for more information, see EPO’s Metekel Conflict page). Moreover, traditional elders from Konso, Gedio, Borena, and Gebrabal are trying to resolve the conflict between Burji and Oromo ethnic groups at the border between Burji special woreda in Southern Nations, Nationalities and Peoples region (SNNPR) and Guji zone in Oromia region. On 4 June, ethnic Burji rioters beat to death 10 ethnic Oromos from Guji zone and injured 20 others at Soyama town market in Burji special woreda. This attack was conducted after a rumor circulated that an ethnic Burji person had been killed by ethnic Oromos from Guji zone at an unidentified kebele. However, according to officials, he was allegedly killed by the OLF-Shane (for more details on this event, see EPO Weekly: 4-10 June 2022). The Burji special woreda officials stated that 70 people accused of participating in the killings of Oromo civilians were arrested (VOA Amharic, 23 June 2022).

On 18 June, members of the OLF-Shane were accused of shooting and killing at least 200 people, mostly ethnic Amharas, in Gutu, Cherkosa, Silsaw, Begene, Chakaw sefer, and Hayaew areas in Tole kebele in Gimbi woreda in West Wollega zone, which lies along the A4 highway connecting Gimbi and Nekemte towns (AP News, 19 June 2022). According to more recent reports, the attack also spread to the nearby Se kebele in Bolo Jingafoy (Miziga) woreda in Kamashi zone in Benshangul/Gumuz region (DW Amharic, 27 June 2022). More than 3,000 people were internally displaced as a result, and have taken shelter in Arjo Gutedu and Ephrem towns (VOA Amharic, 25 June 2022; DW Amharic, 20 June 2022). The West Wollega Zone Administration and Security Office stated that an unidentified number of people suspected of providing information to the rebel group and guiding the group to conduct the attack were arrested and are under investigation (VOA Amharic, 25 June 2022).

Some reports indicate that the number of fatalities may total over 500 and that the victims included women and children. The Ethiopian Human Rights Commission (EHRC) pointed out that clashes between government forces and OLF-Shane militants had resulted in “severe casualties, injuries, and damage to property,” and called on the government to take the necessary precautions to prevent further attacks against civilians (EHRC, 19 June 2022). OLF-Shane’s official Spokesperson, Odaa Tarbii, denied the involvement of OLF-Shane forces and called for “an independent investigation” (OLA Public Relations, 20 June 2022).  Accusations have also been levelled against the government. According to the Amhara Association of America (AAA), the recent attacks occurred with the support of the Oromia region government officials (Al Jazeera, 25 June 2022).

Although details about the attack are still under investigation, it is important to note that the massacre occurred in the context of intensified fighting between government and OLF-Shane forces, including on the day of the incident (AP News, 19 June 2022). A few days before the Tole attack, OLF-Shane forces attacked Gimbi town and its environs as part of a coordinated show of strength that also included attacks on Gambela and Dembi Dolo cities (Addis Standard, 14 June 2022). These are the first major attacks by the group on important urban centers. Intensified clashes between government and OLF-Shane forces were also reported in Tole shortly before the attack (AP News, 25 June 2022). In a speech published by BBC Afan Oromo, OLF-Shane Commander-in-Chief, Jaal Marroo, indicated that his forces had attacked these areas to disprove the government’s claim that it had neutralized the OLF-Shane following large-scale military operations in April (BBC Afan Oromo, 24 June 2022; Ethiopian Broadcasting Corporation, 9 April 2022).

Clashes between Oromo and Amhara community members have been on a rise over the past two years, especially in areas of western Oromia (Ethiopia Insight, 1 June 2022). As the security situation has deteriorated due to ongoing fighting between OLF-Shane and government forces, incidents of targeted violence against ethnic Amharas in Oromia region have also increased. ACLED records nearly 50 incidents of violence targeting civilians, with at least 630 fatalities among ethnic Amhara civilians, in Oromia region since 1 April 2018. On 18 August 2021, OLF-Shane militants reportedly attacked ethnic Amhara settlements in Kiremu in East Wollega zone in Oromia region, killing at least 150 people. On 30 March 2021, 28 civilians – assumedly Amharas – were killed by suspected OLF-Shane militants in Bone Kebele in Babo Gambela woreda in West Wollega zone.

Various entities have commented on the mass killing in West Wollega zone. Prime Minister Abiy Ahmed condemned the killings in both Oromia and Benshangul/Gumuz regions (Facebook, Abiy Ahmed Ali, 20 June 2022). The government reaffirmed that its joint operations by regional and federal security forces will continue against the OLF-Shane (FDRE Government Communication Service, 20 June 2022). Similarly, the UN High Commissioner for Human Rights (OHCHR) has urged the Ethiopian government “to hold prompt, impartial and thorough investigations into attacks that led to the killing of hundreds of people in the West Wollega zone” (OHCHR, 23 June 2022). Moreover, the House of Representatives established two groups to conduct an investigation into the attacks by the OLF-Shane in Gambela region and West Wollega zone in Oromia region and the humanitarian needs in these areas (House of Peoples Representatives of FDRE, 23 June 2022).

Opposition parties also condemned the killings (National Movement of Amhara, 20 June 2022; Ethiopian Citizens for Social Justice, 20 June 2022). On 21 June, members of the House of Representatives from the National Movement of Amhara (NaMA) party walked out of the parliament after the speaker of the House refused to accept the members’ request to add the killings of ethnic Amhara civilians in Wollega and others areas of the country to the agenda of the parliament (Facebook, Dessalegn Chanie, 21 June 2022). Two other opposition parties, the OLF party and Oromo Federalist Congress (OFC), called for an independent investigation into the incident (Oromo Liberation Front-OLF/ABO, 22 June 2022; Oromo Federalist Congress – OFC, 22 June 2022). On 24 June, students of the University of Gondar in Gondar town in Amhara region held protests condemning the killings of civilians in Tole. As a result of the attack, tension in the country has increased, and the relationship between ethnic Amhara and Oromo communities, already at a historic low, has worsened.

Correction: An earlier version of this weekly included a report of armed clashes between a Sudanese armed group, TPLF-affiliated militants, and Amhara militia members at Gelal Weha area in West Gondar zone. The report has been updated to exclude that event due to lack of verifiable information. The event has also been removed from the dataset.