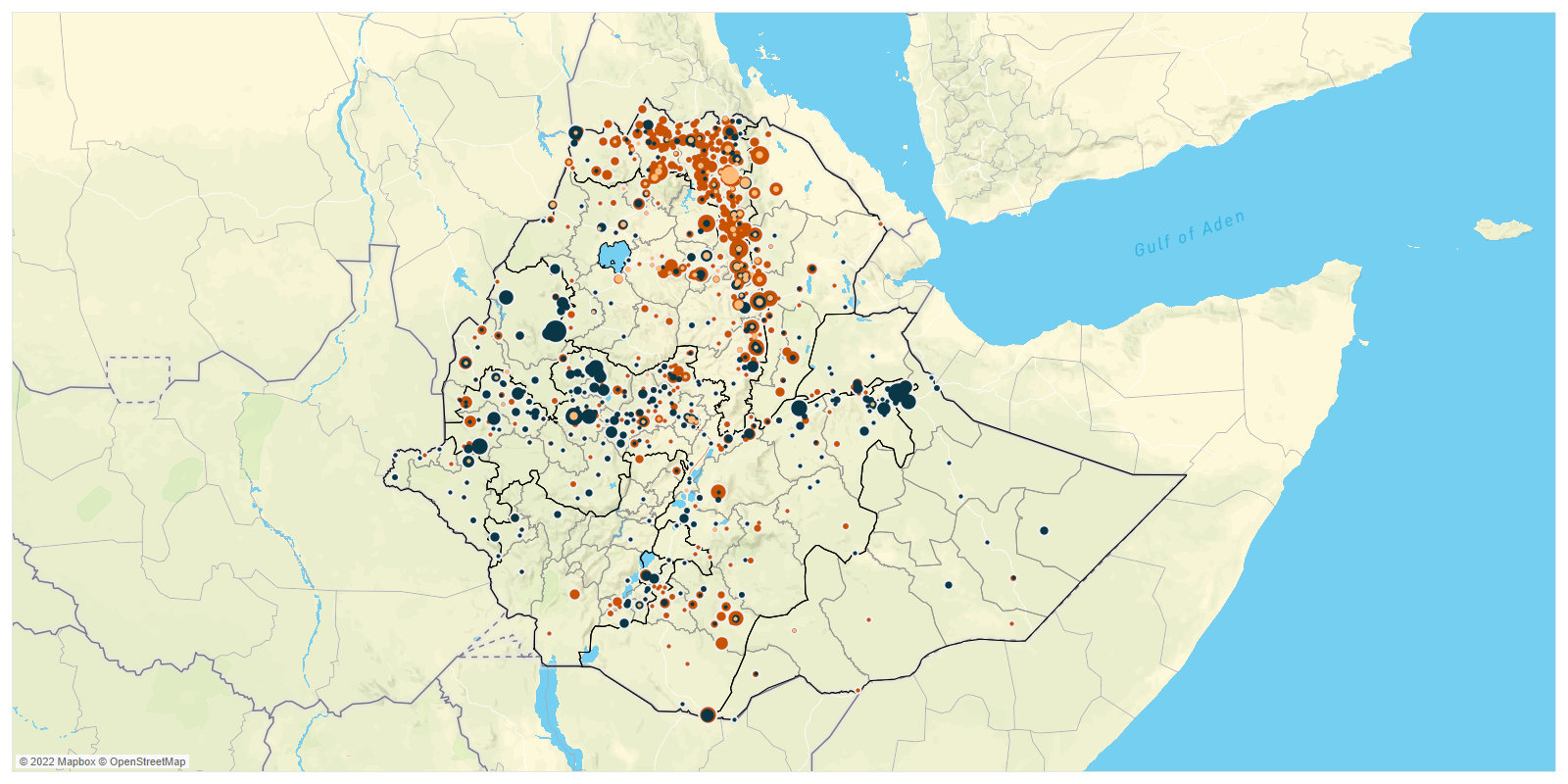 By the Numbers: Ethiopia, 21-27 May 2022 2Some events from this coverage period might be included in the data in subsequent weeks due to reporting delays. 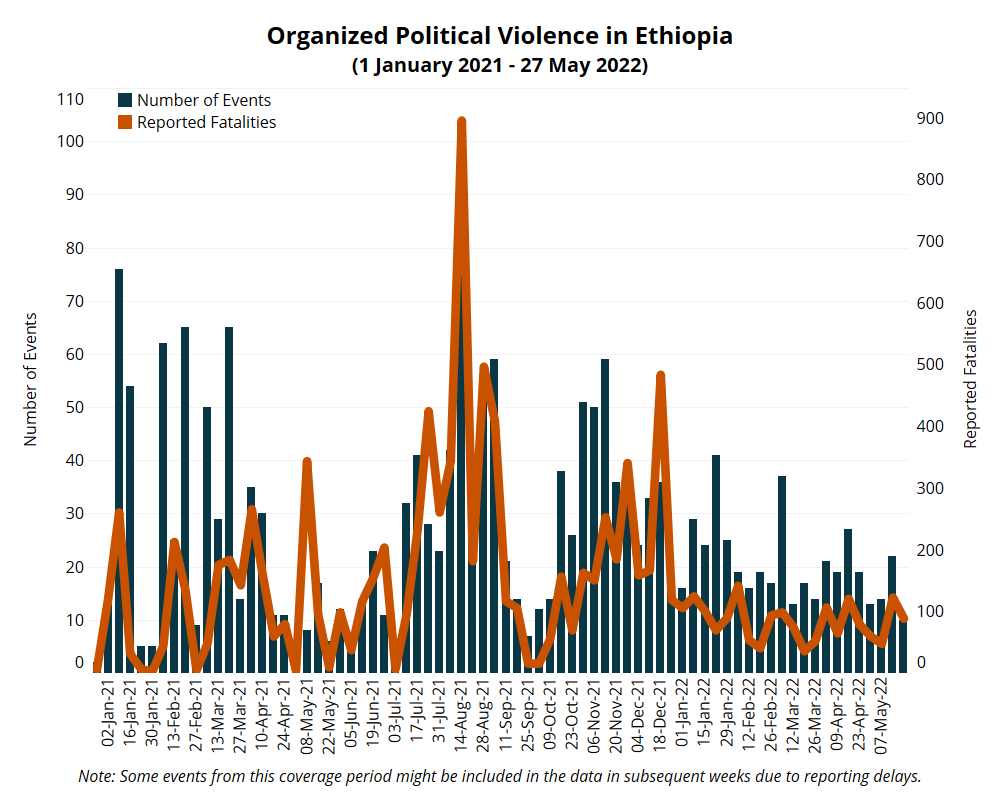 Last week, hundreds of people, including journalists, were arrested in Amhara region and the capital city, Addis Ababa. The government announced that it was undertaking “law enforcement” operations in the country. Federal police and Addis Ababa city police reportedly arrested more than 349 people in Addis Ababa. The arrestees were accused of various “criminal activities,” including inciting violence through social media, having links with Al Shabaab and the Oromo Liberation Front (OLF)-Shane, and conspiring to initiate religious-based disturbance in the city (Ethiopian Federal Police, 26 May 2022). Eighty-four people accused of having links with Al Shabaab were arrested in collaboration with the Somali regional state police. The Ethiopian Human Rights Commission (EHRC) reported that by 27 May, 18 journalists and media personnel were under arrest in the country (Ethiopian Human Rights Commission, 28 May 2022).

On 23 May, the Head of the Amhara Region Peace and Security Office announced the arrest of more than 4,500 people overall following the joint law enforcement operations by the regional and federal governments to counter “criminal activities” (Amhara Media Corporation, 23 May 2022). Social media activists, local journalists, Fano militia members, opposition party members, and a former commander of Amhara regional special forces are among those detained. Such mass arrests were last observed during the recent state of emergency, which was issued on 2 November 2021 and lifted on 15 February 2022. During that period, hundreds of people, mostly ethnic Tigrayans, were detained after being accused of having links with the Tigray People’s Liberation Front (TPLF) or OLF-Shane (for more details on these arrests, see EPO Weekly: 6-12 November 2021).

In Oromia region, armed clashes between OLF-Shane and government forces continued last week, although there was a decrease in the number of battle events recorded compared to the previous week. On 21 May, the OLF-Shane clashed with the Ethiopian National Defense Force (ENDF) in Ajamo Kura kebele in Ameya woreda and Bantu town in Tole woreda in South West Shewa zone. The OLF-Shane claimed to have killed 30 and injured 25 members of the ENDF (OMN, 22 May 2022). On 26 May, the OLF-Shane clashed with ENDF in Heban Arsi woreda in West Arsi zone, resulting in an unidentified number of fatalities.

Violence against civilians has also continued in the region. On 22 May, members of the ENDF shot and killed one person in Dengore Chelle kebele in Boset woreda in East Shewa zone after accusing him of being a member of the OLF-Shane. The victim had been arrested a few days earlier at Delbo Meskele. The next day, members of the ENDF and Oromia regional special forces shot and killed two relatives in Bako Ano kebele in Illu Galan woreda in West Shewa zone after accusing them and their parents of being OLF-Shane members. A few days later, on 27 May, residents of Jeldu woreda gathered in Shikute town in West Shewa zone and rallied against the OLF-Shane.

In Gambela region, on 21 May, an unidentified armed group attacked the Ukugo refugee camp and opened gunfire on refugees living in the camp near Dimma town in Agnewak zone and killed four people (see map below). Similarly, on the same day, an unidentified armed group attacked civilians in Merkes kebele and shot and killed two people. It is not clear whether the attackers were the same armed group. 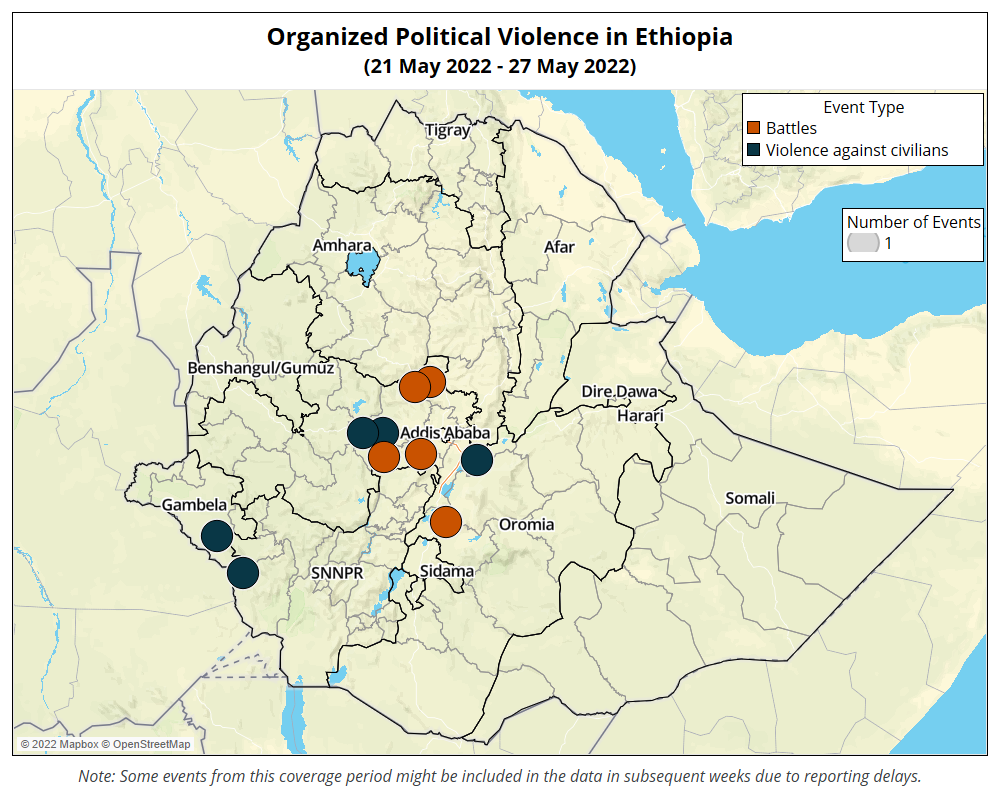 Lastly, reports indicate that some members of an unidentified armed group that previously agreed to surrender and voice their demands peacefully have decided to raise arms again in Kamashi zone in Benshangul/Gumuz region (ESAT, 27 May 2022). On 19 March, a traditional peace and reconciliation ceremony was held between the regional government and leaders of the Gumuz People’s Democratic Movement (GPDM) – political and armed wings – in the zone (see EPO Weekly: 12-18 March 2022 for more on the Kamashi traditional peace and reconciliation ceremony). It is not clear if members of the GPDM were those who decided to raise arms again and if so, why. Previous attempts to peacefully settle armed conflicts have failed in the region. Last week, the Chief of General Staff, Field Marshal Berhanu Jula, warned that the ENDF will take “all necessary measures against this group” (ESAT, 27 May 2022).

Weekly Focus: Another Critical Juncture for the Prosperity Party?

Prime Minister Abiy Ahmed and the ruling Prosperity Party (PP) won the latest national elections by a wide margin in every region in 2021. The National Movement of the Amhara (NaMA), which won five of the available seats for the House of Peoples’ Representatives, had the biggest win as an opposition party, followed by the Ethiopian Citizens for Social Justice (EZEMA) which won four seats (NEBE, 12 July 2021). At the time of the elections, preventative actions, including arrests and closure of political offices, against other ethno-nationalist politicians like those in Oromia region, in Wolayta in Southern Nations, Nationalities and Peoples region (SNNPR), and in Somali region made it clear that the ruling party was not willing to tolerate the political demands from ethno-nationalist parties in the country (Addis Standard, 10 August 2020; Africanews, 18 March 2022; ONLF, 21 October 2020).

At that time, NaMA seemed to be an exception to the PP’s dominance of politics throughout the rest of the country, which made sense given their alignment on critical national issues. Among other things, NaMA advocated heavily for the return of Western Tigray zone to Amhara control, and the protection of ethnic Amharas throughout areas of Ethiopia where they were facing heavy persecution.

More importantly, NaMA – and by extension Amhara ethno-nationlist politicians in general – played a vital role in rallying fighters to defend Amhara region and the capital Addis Ababa against the TPLF as it pushed southward in 2021. Yet, despite these alignments, NaMA representatives accused the federal government of incompetence during incidents of violence in Ataye city in North Shewa zone and its surrounding areas near Oromo special zone. Demonstrations in Bahir Dar turned violent in late April when pro-NaMA crowds burned PP banners and chanted anti-Abiy slogans (see EPO Monthly, April 2021 for more details). This relationship reached its worst point prior to last week during the peak of fighting with the TPLF in Amhara region when government forces retreated multiple times in the face of attacks by the TPLF much to the dismay of Amhara forces who were there to defend key cities and roadways.

Last week’s arrests, as detailed in the situation summary above, mark a new low for the relationship between NaMA, Amhara ethno-nationalists, and the rest of the federal government, and could mark a major pivot point for the ruling party. This would have implications for future governance, negotiations with the TPLF, and the national direction.

Prime Minister Abiy Ahmed’s political alliances have frequently shifted at critical times of political turmoil in the country. His “betrayal” of allies in Oromia region – considered a base of support that put him in office – led to widespread riots and a violent crackdown on youth during the summer of 2020 (Foreign Policy, 25 January 2022). Although violence has been relatively limited in Amhara region thus far, widespread arrests and limited clashes could easily spread and engulf the region as it did in Oromia region in 2019.

There are several key factors that should be considered in the coming weeks as the relationship between the federal government and NaMA and Amhara ethno-nationalists degrades further. First point concerns the status of the ENDF, which was severely degraded by the TPLF at the outset of conflict in the north and subsequent conflict in Tigray region. If the army has been sufficiently restored to full strength, and the TPLF no longer represents a threat to the capital, Amhara region’s status as a buffer between the capital and Tigray region is no longer important. It must be considered, however, that building a national army in the space of two years all while fighting a major war would be a very difficult task indeed. Some reliance on Amhara region  – and by extension Amhara ethno-nationalist politicians – is likely to be retained. A total crackdown on Amhara ethno-nationalist politicians and movements could turn out to be a miscalculation for the federal government and expose the capital to a heightened risk of attack by the TPLF.

Secondly, it is imperative to consider the future of Amhara ethno-nationalism and its political agenda. The “Amhara question” and the assassination of Amhara regional government officials on 22 June 2020 highlighted the rising influence and popularity of Amhara nationalist narratives and the power they possess (African Affairs, 20 January 2021). Amhara ethno-nationalists have achieved many of their political goals over the past few years: Amhara authorities currently administer western Tigray, the TPLF threat has been significantly curbed, and there are indications that the future of Ethiopia will include a trajectory that leans more toward  ‘pan-Ethiopianism.’ Yet, while NaMA was able to capture Amhara nationalism’s power to some degree, its participation in the government has been considered a step too far for some members, and internal fissures have begun to show (NAMA, 9 May 2022). More extreme elements of Amhara ethno-nationalist politics, like Fano youth militias, have already engaged in violent clashes with regional and federal forces. In the face of heavy political repression, an expanded conflict between these actors could be devastating.

Finally, one must consider the timing of the arrests and crackdown. Although the reasons for arrests occurring during the past few weeks are not entirely clear, its timing could suggest new efforts by the federal government to end the conflict with the TPLF. One of the non-negotiable points listed by TPLF authorities was the removal of Amhara forces from Western Tigray – also considered a non-negotiable point by Amhara ethno-nationalist politicians. Should negotiations indeed be progressing  – of which there is no evidence thus far – Western Tigray and its current status of administration under Amhara region could be up for negotiation.