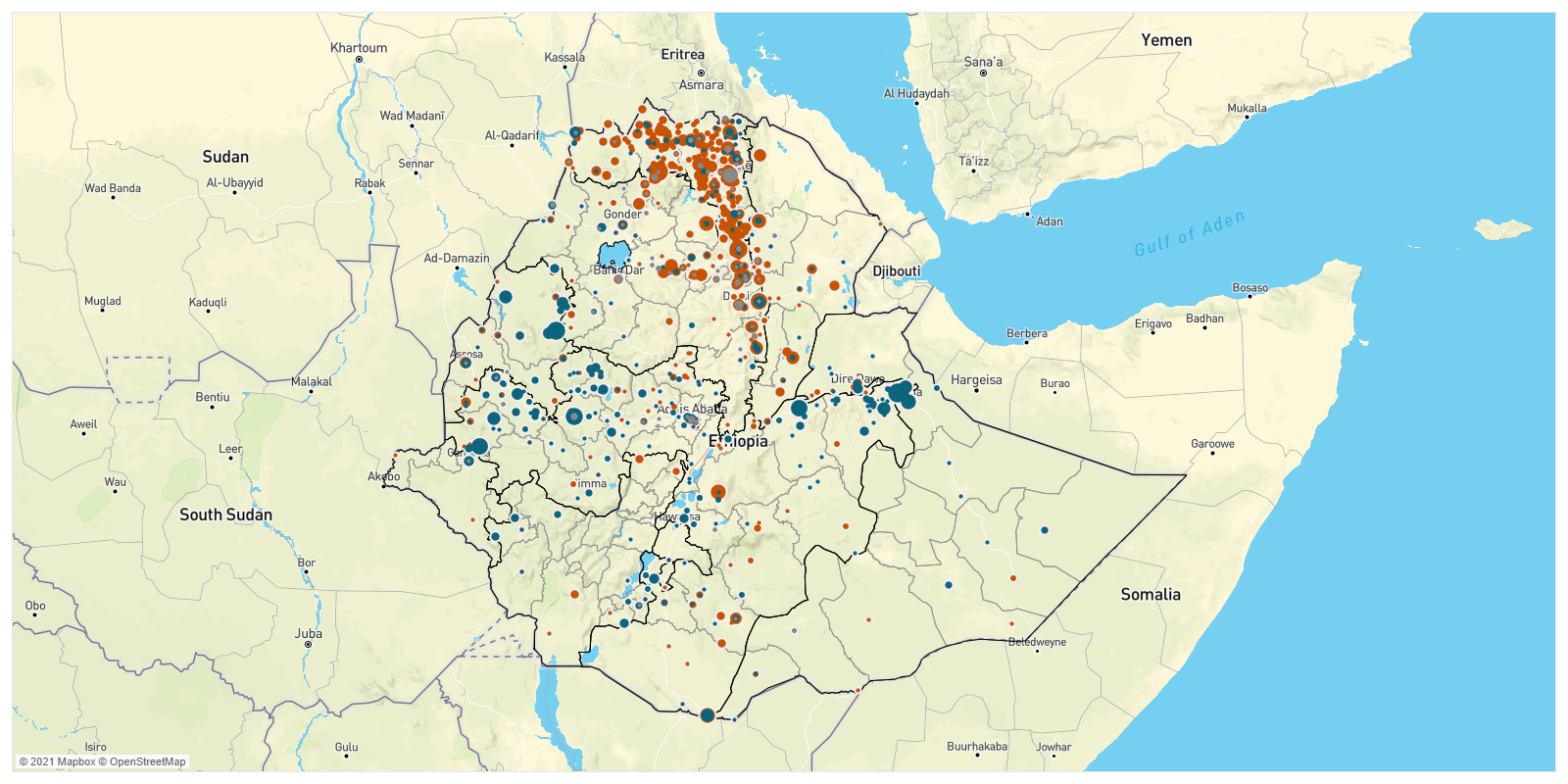 By the Numbers: Ethiopia, 6-12 November 20212Some events from this coverage period might be included in the data in subsequent weeks due to reporting delays. 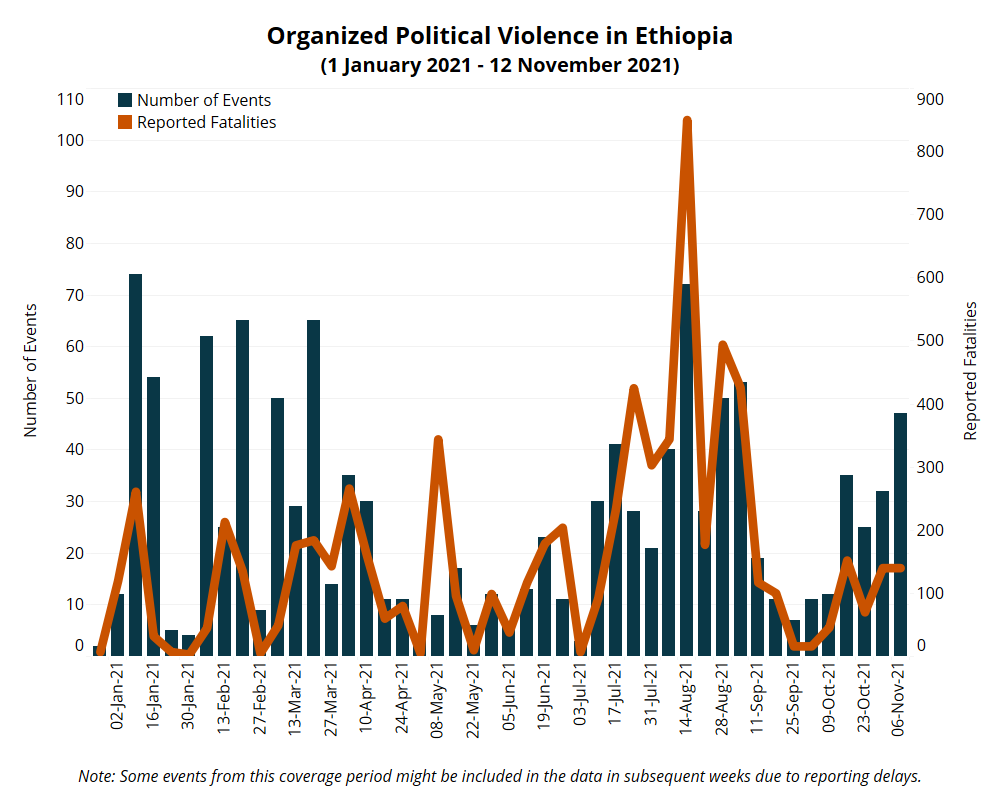 Fighting between TPLF forces and Afar militias and special police was also reported throughout the week. Despite several (false) claims that the strategic town of Mille had been taken, fighting is ongoing along the Kasa Gita/Burka front located east of Bati town (EBC, 14 November 2021). Fighting in the Afar region also continued throughout the Chifra area with little changes in territorial control on either side. 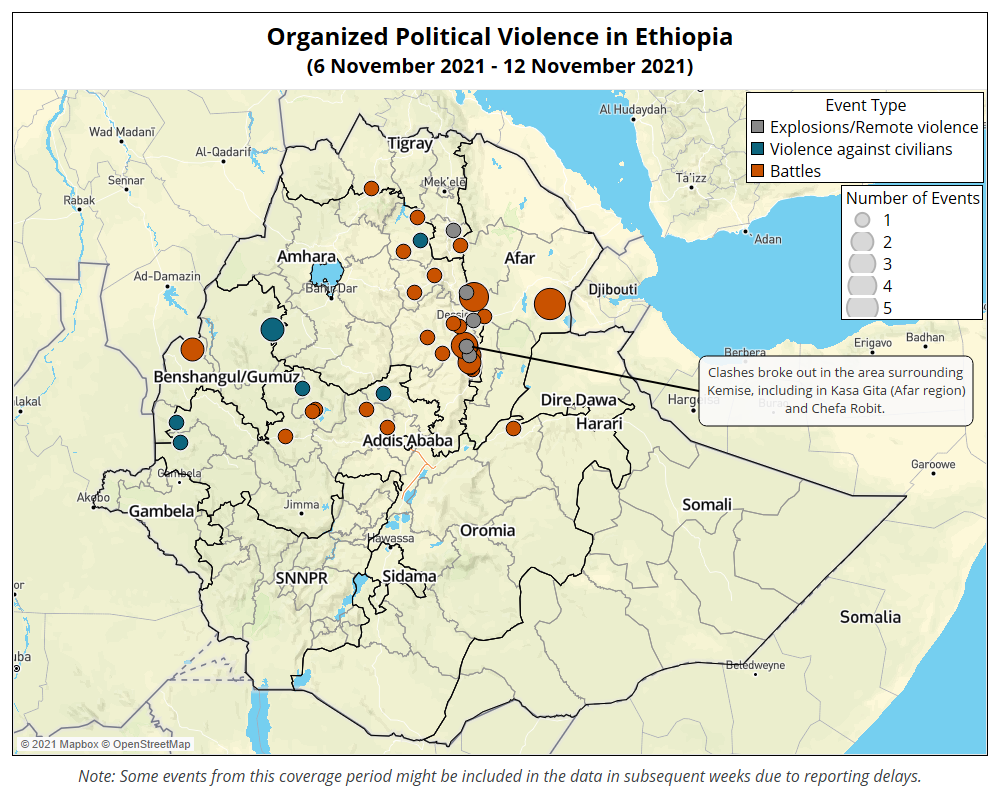 In Benshangul/Gumuz region, unidentified armed gunmen attacked civilians in Mandura town, Metekel zone, killing four people and wounding six others. According to reports, a subsequent security crackdown resulted in the deaths of 19 people. Significant violence against civilians and armed clashes have occurred in the area amid an armed insurgency led by the Benshangul People’s Liberation Movement. According to government sources, last week, ENDF, Benshangul/Gumuz regional special forces, and local militias clashed with the Benshangul People’s Liberation Movement in Sherkole woreda in the Asosa zone (EBC, 12 November 2021). Government sources often claim that the militants are being supported by the TPLF.

As Ethiopia’s State of Emergency laws have come into effect amid intensified fighting in Ethiopia’s north and west, government police forces have cracked down hard on individuals with suspected links to the TPLF or OLF-Shane. While many support the government’s aims in increasing security throughout the country, others are concerned that the government has targeted individuals based on identity and fear that anyone who expresses political differences could be targeted. Ethiopia’s state of emergency laws allows authorities to arrest anyone without a warrant if there is “reasonable suspicion” of cooperation with “terrorist groups” (A State of Emergency Proclamation No 5/2021). Those arrested can be detained without judicial review for as long as the proclamation is in place, currently for six months (A State of Emergency Proclamation No 5/2021).

A crackdown on media agencies was also reported. In the Somali region, four journalists from Nabad TV were reportedly arrested shortly after the TV station was closed by government authorities (BBC Amharic, 13 November 2021). Nabad TV was founded by Filsan Abdullahi, the former minister of Women, Children, and Youth Affairs appointed in March of 2020. Filsan resigned from her position in the government in September 2021 citing “personal reasons” (Addis Standard, 28 September 2021). The Ethiopian Media Authority (EMA) issued a warning to private media last week asking journalists to consider the implications of reporting in Ethiopia’s current environment (Addis Standard, 12 November 2021). The warning comes as journalists such as those from Ahadu Radio have been held in prison for weeks (Ethiopia Insider, 12 November 2021).

Arrests of individuals and those associated with media outlets under Ethiopia’s state of emergency laws represent a new tightening of political space. On one hand, Ethiopia’s federal authorities are reacting to an ever-more dangerous security situation in which militants seek to overthrow the government. On the other hand, such actions may permanently damage the federal government’s ability to be seen as a genuine partner in future democratic processes.