Afar is located in the eastern part of Ethiopia. The Region has borders with Eritrea in the northeast, Tigray Region in the northwest, Oromia Region in the southwest, Somali Region in the south, and Djibouti to the east. The Afar Region is divided into five administrative Zones and 30 Woredas. This Region is predominantly occupied by the Afar ethnic group (92%) who mostly engage in agro-pastoralist activities. In the Afar culture, clans are important social and political units. 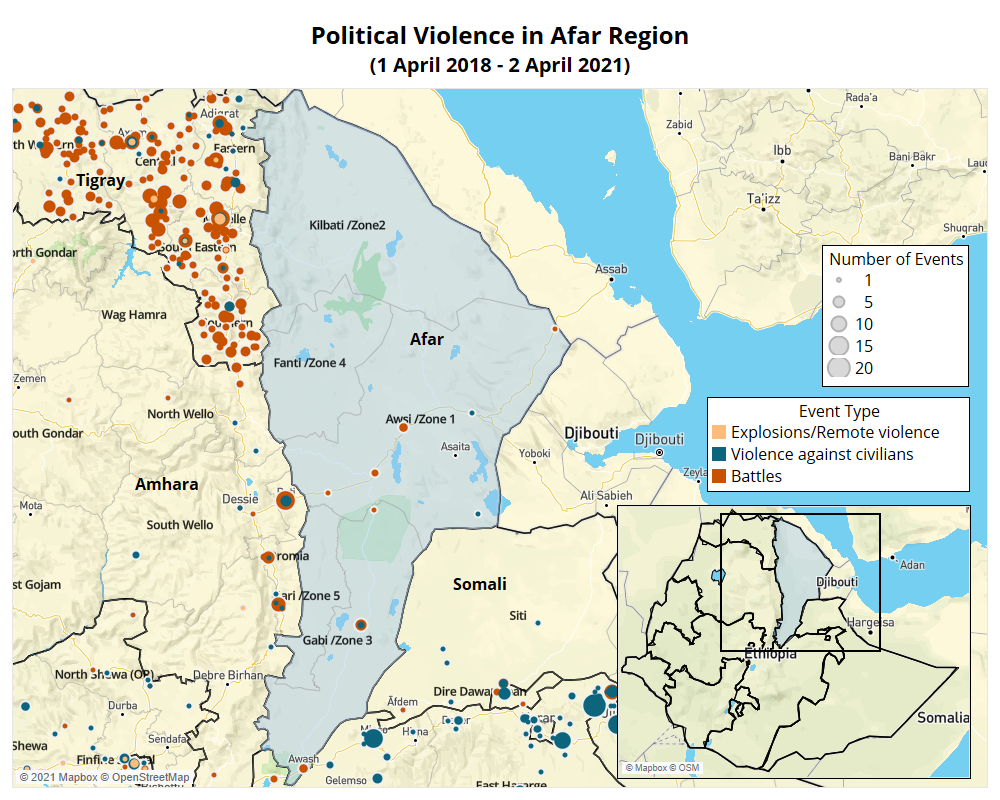 As with other regions in the country, conflicts in the Afar Region are mostly related to ethno-nationalism, localized competition for power, and intra-ethnic conflict. ACLED data indicate that conflict between ethnic militias are the most common form of political violence in the Afar Region, with clashes occurring in border areas with Oromia and Somali regions. In a recent escalation of conflict (April 2021), reports of violence involving the Afar and Somali Regional Special Forces have been reported, with high fatalities. Protest activities in Afar are limited to sporadic, reactionary demonstrations usually related to specific local events – in contrast to sustained protest movements that have occurred in other parts of the country.

Serious conflict often occurs within contested areas consisting of three Kebeles along the Afar and Somali regional borders, which is inhabited by ethnic Somalis from the Issa Clan. These three Kebeles located in Afar’s Zones 1 and 3 and Somali’s Sitti Zone are: Adaytu Kebele of Mille Woreda, Undufo Kebele of Gewane Woreda, and Gedamaytu Kebele of Amibara Woreda. The Issa ethnic inhabitants of the area have agitated to join the neighboring Somali Regional State of Ethiopia, an action that the Afar regional authorities vehemently oppose. An agreement signed between the two Regions granting the three Kebeles greater political autonomy as “special Kebeles” within the Afar Regional State failed to resolve the conflict, as elders of the Issa Clan continue to oppose the arrangement.

Between July and October 2020, approximately 29,000 households were internally displaced because of violent conflicts in the disputed areas (OCHA, 27 January 2021). On 23 January 2021, 30 fatalities and 40 injuries were recorded as a result of armed conflict between the Federal Police and Afar Security Forces and the Issa militia in Adaytu village. A similar cross-border attack by Afar Special Forces on a Somali Regional State Special Forces’ camp in Afdem Woreda, Sitti Zone (Somali Region) a month earlier had left as many as 39 people dead (Addis Standard, 28 December 2020).

Although violent conflict has cooled in the contested areas, political debates are raging ahead of Ethiopia’s upcoming sixth general election and armed conflict could re-emerge at any moment. The Afar Region had registered a  dispute against the National Electoral Board of Ethiopia (NEBE)’s decision to consider 30 polling stations in the contested borderland under the Somali Regional State. In an effort to avoid electoral violence, NEBE decided to cancel the disputed 30 polling stations and asked residents of the disputed locations to register and vote in neighboring Kebeles (NEBE, 2021). This decision was opposed by the Somali Regional State on 25 March 2021, with authorities stating that it would be “hard to participate” in the election should the disputed polling stations remain cancelled (Addis Standard, 26 March 2021).

EPO is closely following the political developments along the Afar and Somali regional borders and will publish regular updates. See also the Afar-Somali Border Conflict page.