The Kemise conflict in the Oromo Special Zone of Amhara has re-emerged with renewed ferocity in early 2021. Reports indicate that heavy fighting has occurred between Oromo ethnic militias and Amhara Special Forces across several locations in the Zone. Early reports by a local administrator admitted that the Oromo gunmen had managed to temporarily take control of Ataye town, the capital of Efratana Gidim Woreda of Amhara Region on 20 March 2021, overwhelming security forces in the area (BBC 20 March 2021). 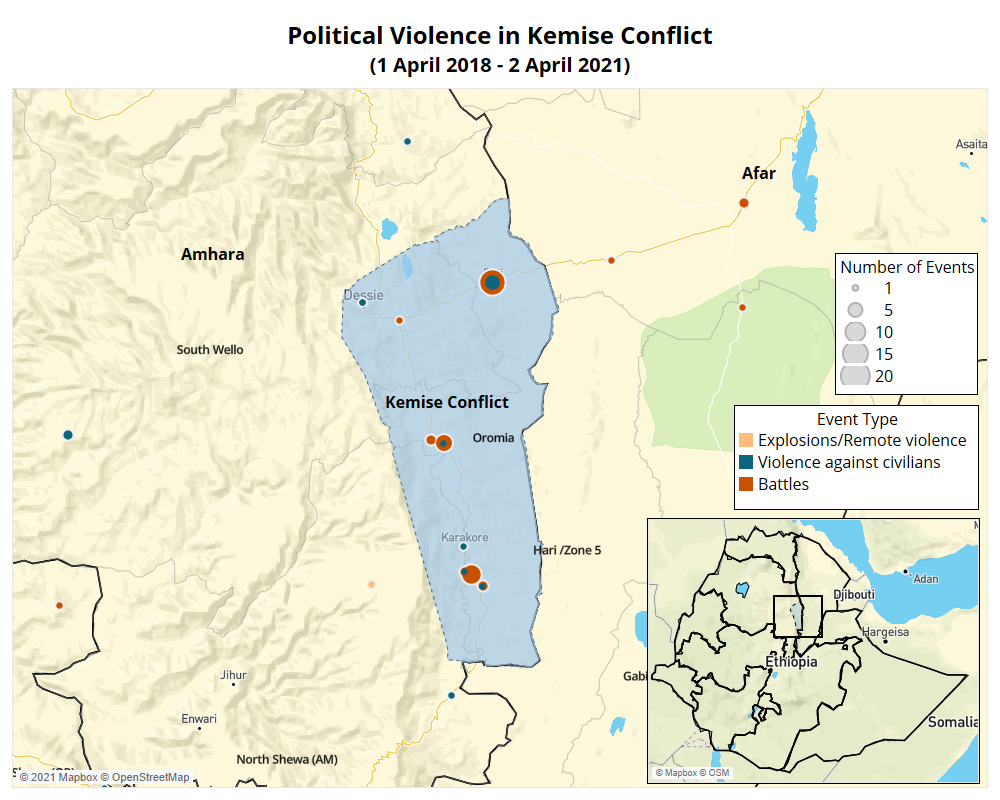 Fighting in areas surrounding the Oromo Special Zone highlights dangerous divisions between the Oromo and Amhara wings of the government. Pushed by ethno-nationalist movements, both Amhara and Oromo political entities have accused the other of instigating the conflict. Citing the use of heavy weapons by the groups opposing Amhara Regional Special Forces, Amhara regional officials have blamed Oromo Liberation Forces (OLF) splinter group, OLF-Shane, for being responsible for the violence (Amhara Communications, 21 March 2021), while Oromo officials blamed Amhara forces for instigating the conflict (BBC 24 March 2021).

Due to its status as a Special Zone, political leaders in the Oromo Zone of Amhara Region have exercised a great deal of autonomy since its creation in 1995. Under Ethiopian law, despite falling under the Amhara Region’s boundaries, the Zone is administered with special provisions to its ethnic Oromo inhabitants, which often places them in direct contestation with Amhara regional authorities. With the rise in ethno-nationalism and the opening of political space after the fall of the TPLF, clashes have occurred in the Zone between some Oromo ethnic militias and Amhara special forces who are responsible for security in areas surrounding the Zone. Serious clashes first erupted in 2019 when Amhara Special Forces were dispatched to areas of the Zone (OCHA, April 2019).

In a wider lens, the current violence occurring in areas surrounding the Oromo Special Zone represents deep divides that are occurring at top levels of the government, in particular, between the Oromo and Amhara branches of the “Prosperity Party”. This has been exacerbated by the upcoming elections as each party is attempting to compete for votes. As the OLF and Oromo Federalist Congress (OFC) have pulled out of the upcoming elections, the Oromo Prosperity Party (OPP) became the de-facto “Oromo” party in Ethiopia’s upcoming elections and thus makes attempts to appeal to Oromo ethno-nationalism in order to mobilize voters. In order to compete with the heavily Amhara-nationalistic party, the National Movement of Amahara (NaMA) the Amhara branch of the Prosperity party has had to appeal to Amhara nationalism, which necessarily puts it at loggerheads with the Oromo branch of the party. The differences that are pulling the Prosperity Party apart along ethnic seams are especially vivid in issues like territory disputes that occur frequently in areas where the two Regions share a border.