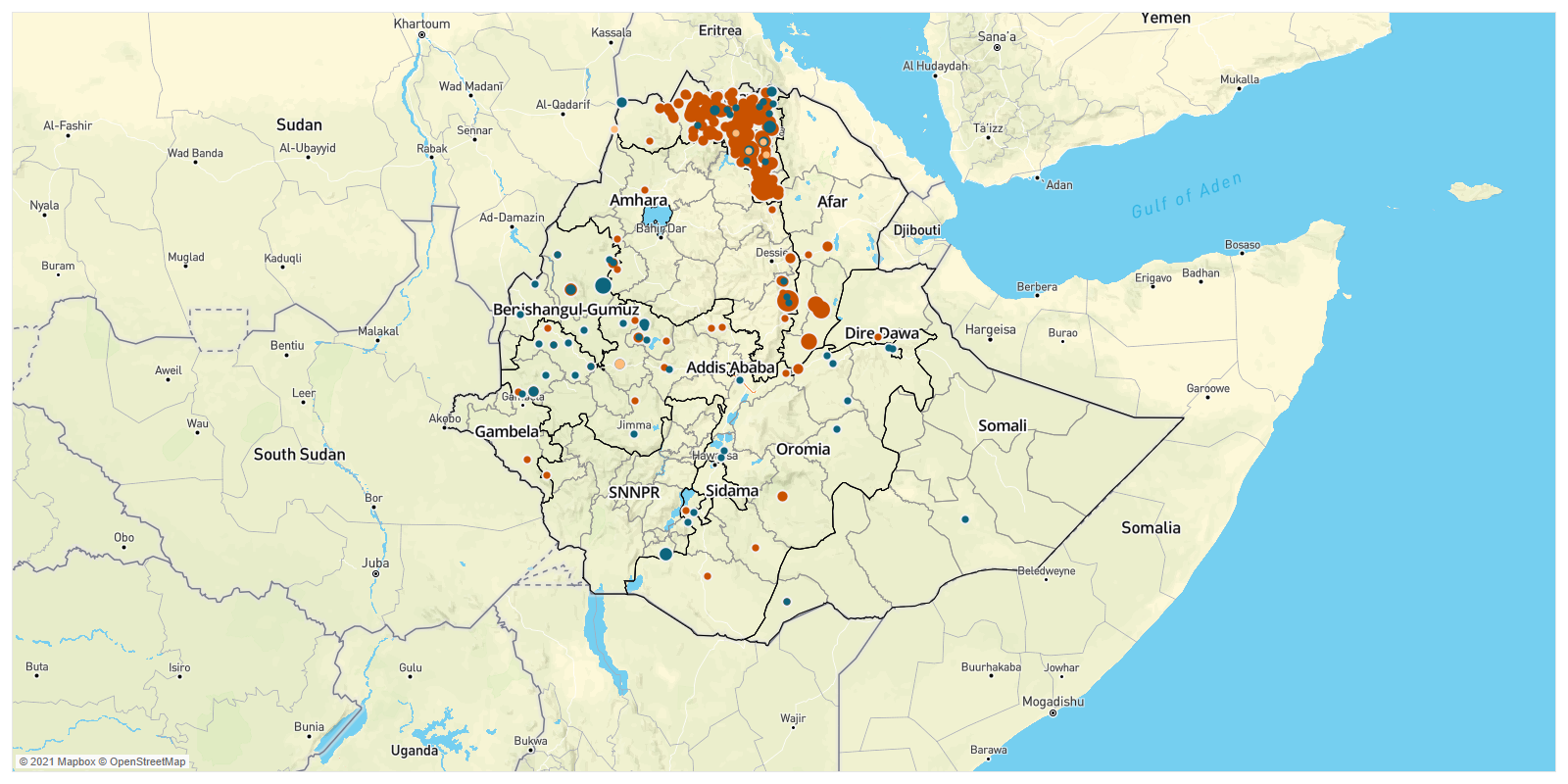 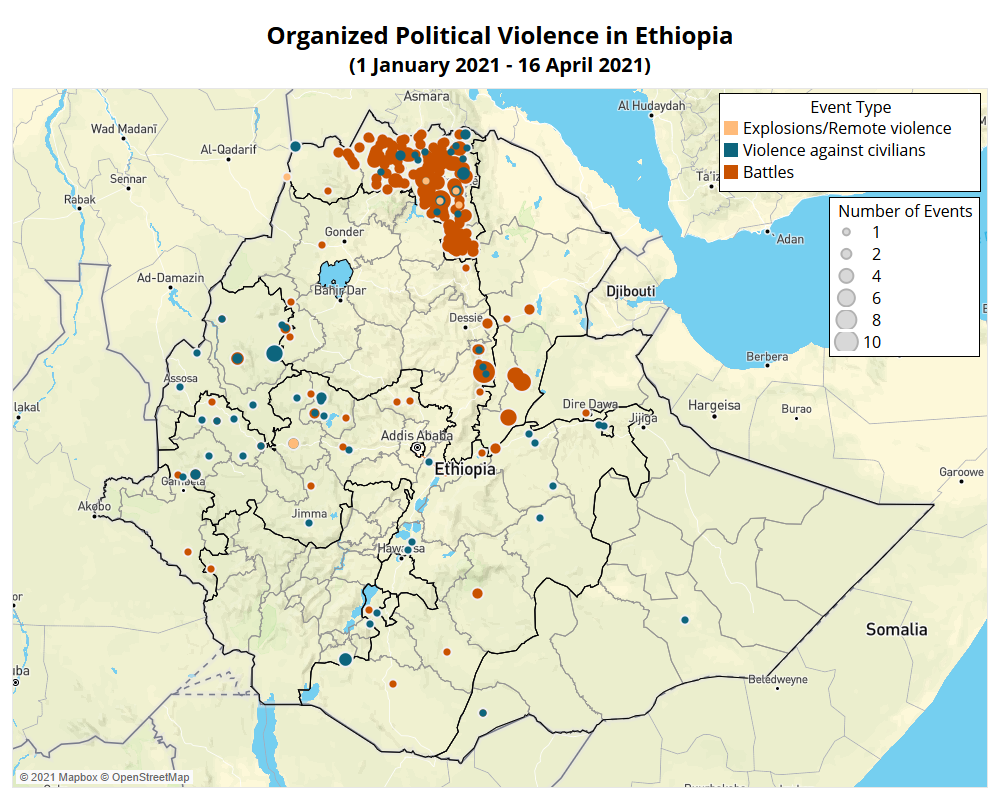 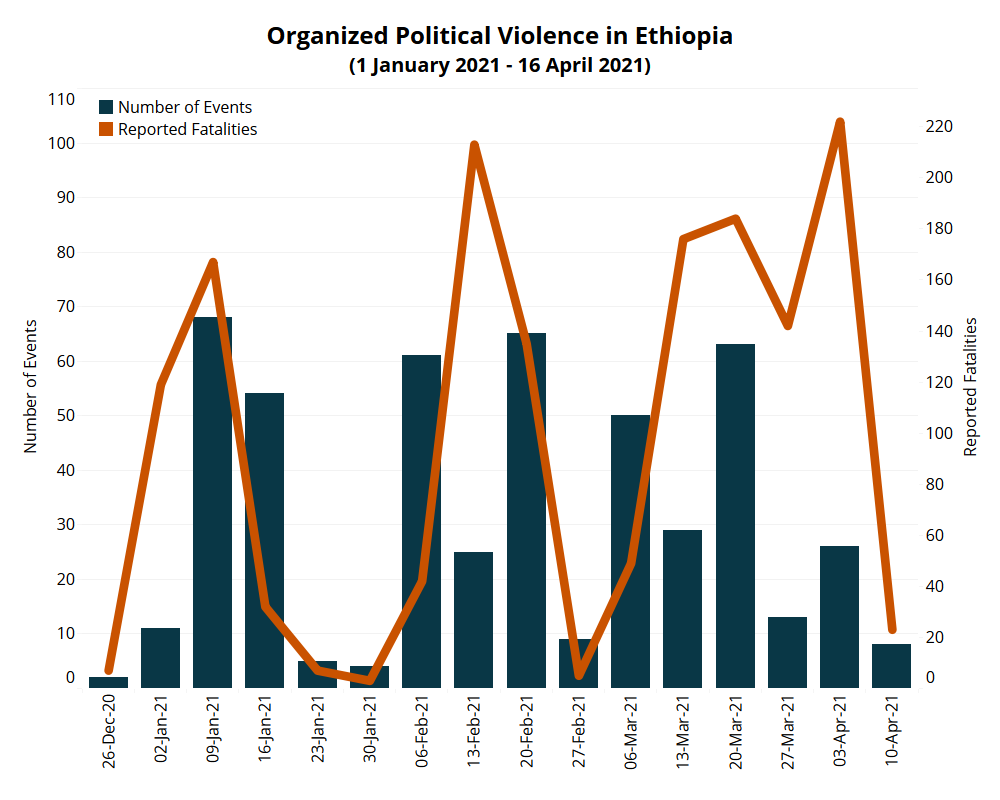 In the Tigray region, fewer clashes were reported this week than in past weeks.  However, attacks against civilians have continued. Eritrean forces killed at least nine civilians and wounded more than 12 in Adwa town before they were stopped by Ethiopian National Defense Forces (Reuters, 14 April 2021). Eritrea has since admitted the presence of its troops in Ethiopia and announced that an agreement has been reached for their withdrawal (BBC Tigrinya, 16 April 2021).

While the situation has improved, humanitarian assistance in the region is still limited, despite the high number of civilians in need. Reports indicate that continuing insecurity and some organizational bureaucracy have limited humanitarian operations in the region.

After a brief calm in areas near the Oromia Zone of the Amhara region (see map below), clashes were reported in the area despite a heavy security presence that managed to prevent further escalation. On 16 April 2021, reports emerged that a group of well-organized gunmen — believed to be a combination of militants from the Oromo Liberation Front (OLF)-Shane and local Oromo militias — clashed with Amhara regional special forces and federal troops in Ataye. Clashes were also reported in the surrounding towns of Shewa Robit, Karakore, Mekoya (Antsokiya), Ephrata Gidim, and Majete. Militants also were reported to have attacked civilians, destroyed housing and businesses, and released prisoners (VOA, 16 April 2021; Amhara Media Corporation, 17 April 2021; Reporter, 18 April 2021). The exact number of fatalities from the clashes is unknown. Clashes are ongoing and tensions remain extremely high. 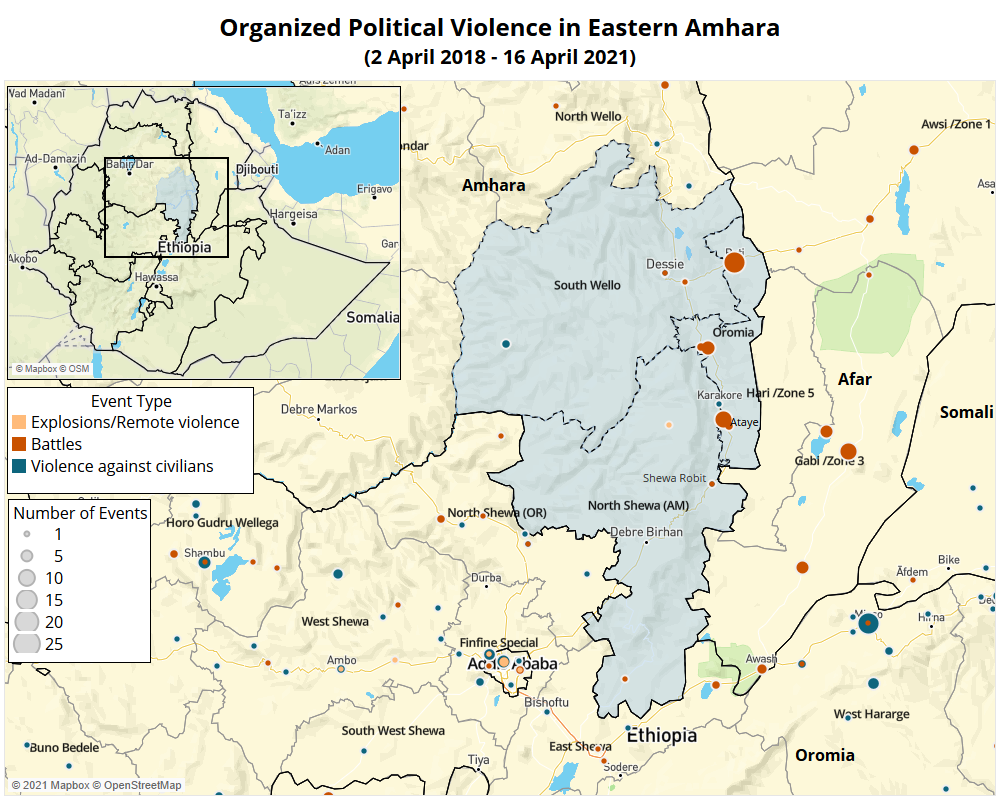 Clashes in the area are a continuation of fighting that occurred just weeks earlier, which resulted in a confirmed 303 fatalities, 369 injuries, and 1,539 burned homes (Africa News, 4 April 2021). On 18 April 2021, the Federal Defense Force announced that the federal government would be taking a more active role by placing the location under federal military control (FDRE Defense Force, 19 April 2021).

The frequency and intensity of violent clashes in the Ataye area have a negative impact on Ethiopia’s national security country-wide. It wears on an already strained relationship between the two largest ethnic communities in the country: the Amhara and the Oromo.  Discontent and frustration towards the government’s lack of or delayed response to attacks on ethnic Amhara throughout Ethiopia has driven deep divides between the Oromo and Amhara regional governments, who trade blame for the breakdown in security. This dynamic has given rise to ethno-nationalist calls on both sides.

Events last week brought heavy condemnation from the National Movement of Amhara party (NaMA), an Amhara nationalist party. The party blamed Prime Minister Abiy Ahmed and the Oromo Prosperity Party for supporting OLF-Shane and attacking ethnic Amharas. In a statement on 18 April 2021, NaMA called for Amharas to organize and defend themselves after “recognizing the lack of a government that can protect Amharas” (National Movement of Amhara, 18 April 2021). Media associated with Oromo ethno-nationalist parties made similar claims, stating that the Amhara regional special police and national army had engaged in violent attacks against Oromo civilians (OMN, 18 April 2021).

Attacks on Amhara civilians in areas of West Oromia have raised tensions to new heights as displaced families arrive in the Amhara region fleeing attacks and ongoing violence (Wazema Radio, 9 April 2021). On 16 April 2021, Amhara rioters, who gathered to denounce the displacement of Amhara civilians, clashed with police and Amhara regional special forces in Finote Selam, killing one officer and wounding another. A truck driver was injured when rioters lit his vehicle on fire in the same area (West Gojjam Zone Police, 17 April 2021; Amhara Media Corporation, 16 April 2021; Reporter, 18 April 2021). The exact number of internally displaced Amharas is unknown.

Furthermore, on 13 April 2021, the Federal High Court of Ethiopia adjudicated a dispute between the Oromo Liberation Democracy Front (OLDF) and NEBE. The court upheld the decision of the NEBE to disqualify the OLDF as a party on 15 December 2020. The NEBE had checked the listed addresses of select members of the party as per the election laws. Most of  the  members whose addresses were checked could not be found under the listed address (Fana Broadcasting Corporate, 13 April 2021).