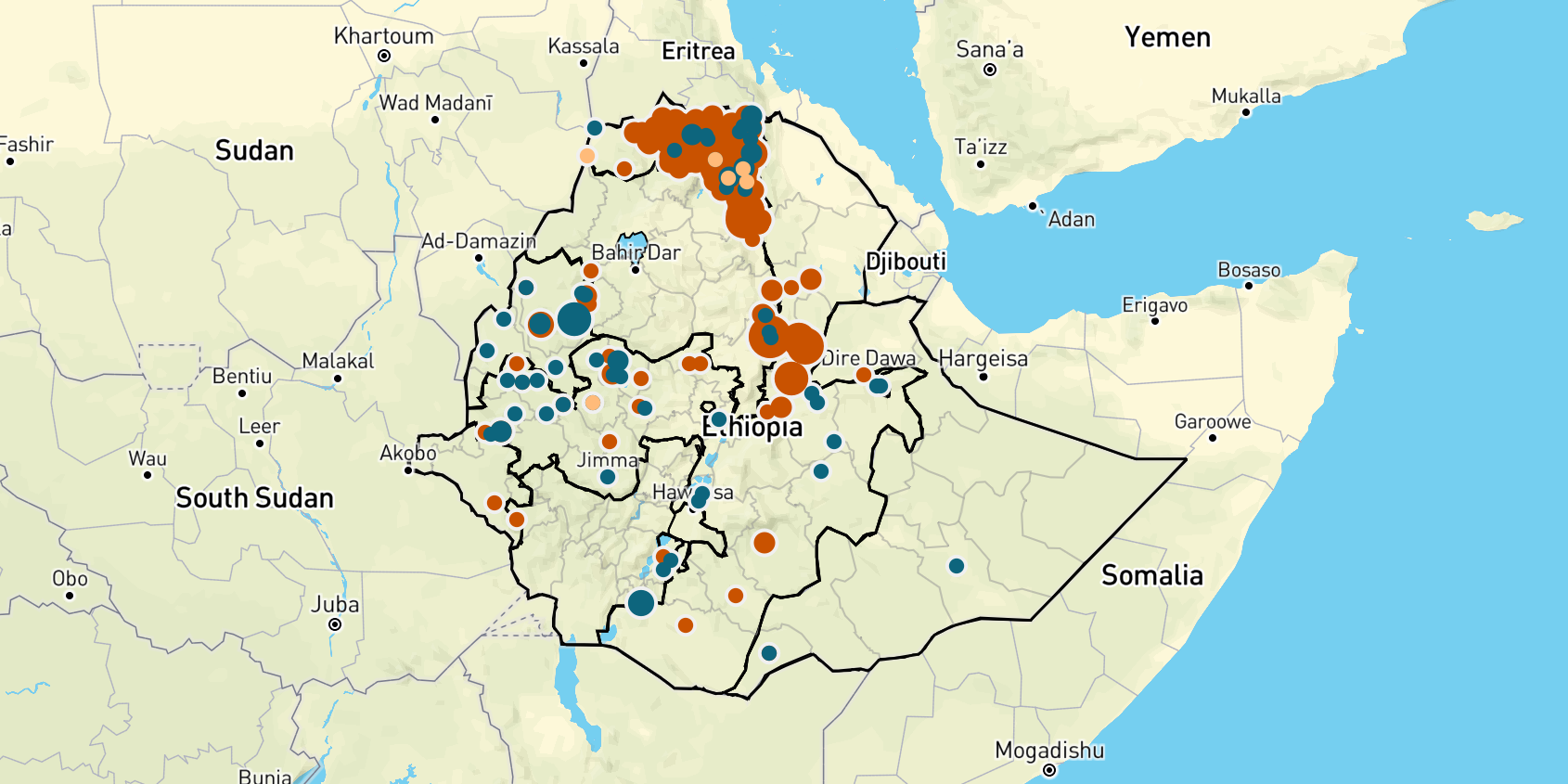 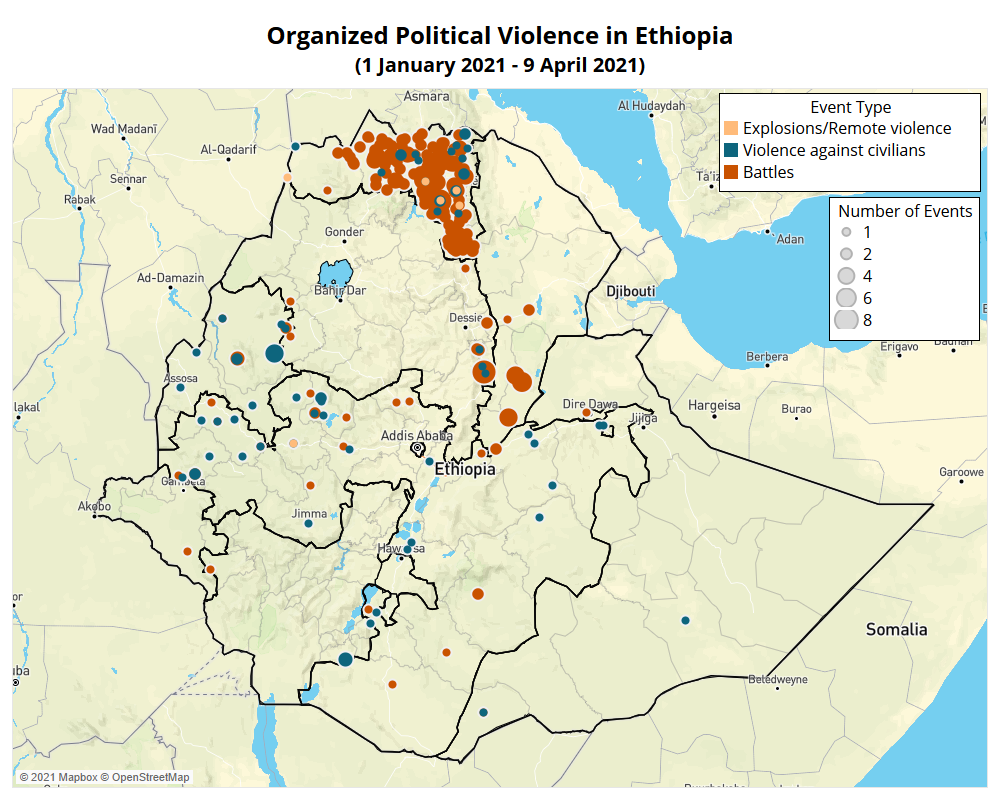 Fighting intensified throughout the beginning of last week (from 2- 7 April 2021) in areas of contested territory between Somali and Afar regional states, resulting in an estimated 100 fatalities. Clashes involved mostly local militia actors, but the regional special forces from both Somali and Afar regions were also involved in supporting the local militias. Meanwhile, clashes in western Oromia between the Oromo Liberation Front (OLF)-Shane and federal forces increased in multiple locations throughout the Horo Guduro Wollega Zone. Ethnic Amhara civilians in the Horo Guduro Wollega Zone and other zones across western Oromia have been displaced after heavy fighting between communities and attacks on civilians perpetrated by the OLF-Shane.  Moreover, clashes related to self-determination within the SNNPR are challenging the region’s peace and security (see graph below for organized political violence in Ethiopia between 1 January-9 April 2021).

In Tigray, there has been a general decrease in hostilities throughout March and into April. Contests for control of the rural areas outside of main cities and roads have decreased as the Tigray Defense Force (TDF) continues a strategy of insurgent attacks that move and engage rather than attempting to hold territory.

Furthermore, as the sixth general election approaches on 5 June 2021, election-related disputes and violence are becoming frequent. Last week, in addition to the intense Somali-Afar clashes triggered by the election constituency designation, a candidate of the National Movement of Amhara (NaMA) party in the Metekel Zone of Benshangul/Gumuz region was assassinated. 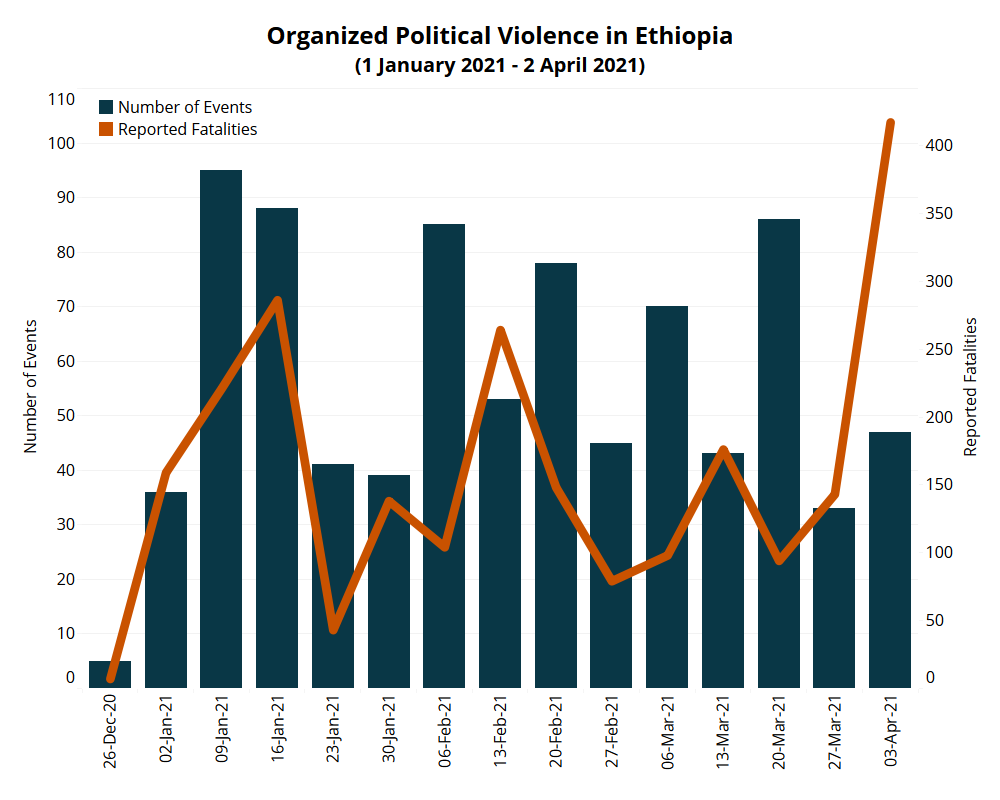 In Tigray, violence levels have generally decreased throughout the months of March and April. This is a result of strategy shifts by the Tigray Defense Force (TDF), who have stopped attempting to hold territory and have instead begun engaging in roving hit-and-run attacks. Despite a relative decrease in territorial conflicts that occurred earlier in Tigray’s Central and Eastern Zones, civilians are still routinely falling victim to violent attacks by TDF. On 8 April 2021, TPLF associated forces reportedly ambushed a convoy traveling between Adwa and Tembien towns (Central Zone), killing an unspecified number of civilians (EBC, 8 April 2021). Reports indicate that at least 33 civilians were killed by Ethiopian Defense Force soldiers in Selekleka town, North Tigray, with hundreds taken hostage and then released.

There are reports of Eritrean forces leaving Ethiopia, although it is clear that they are still present in large numbers in Tigray’s Central Zone. Currently, the most active conflict between TPLF associated militias and the federal government forces is occurring in South and South Eastern Zones respectively.

To resolve the conflict, the Ministry of Peace invited both parties with participants from the country’s peace and security institutions for dialogue on 8 April 2021. Presidents of both regions attended the dialogue conference with their delegations. At the end of their discussion, both parties agreed to stop the violence, retreat their special forces to their borders, and to respect and abide by previous agreements. They also agreed to allow the federal government to investigate the latest round of conflict in order to identify the perpetrators of the recent clash (Ministry of Peace, 8 April 2021).

The area in focus has frequently had violent conflict between agents from Somali and Afar regional states (see map below). In February 2021, ACLED documented three incidents between the Afar and Somali militias in Mile, Adaar, and Amibera Woredas of the Afar regional state. Intense violence in 2019 left more than 30 people dead in the same area. 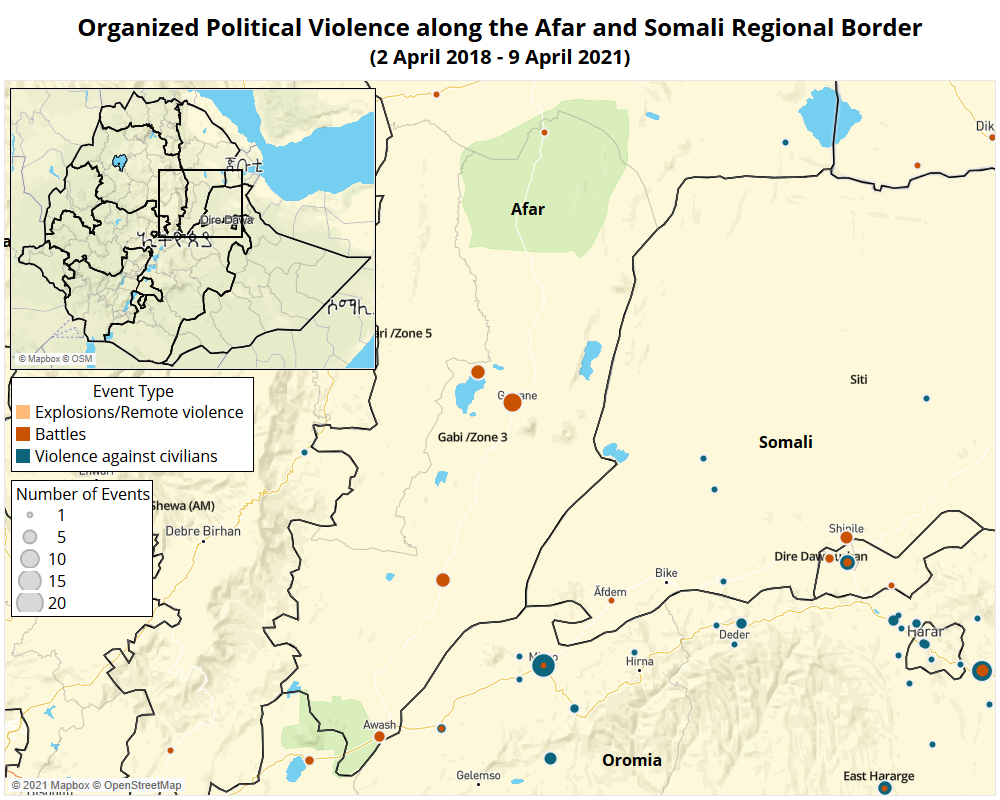 In the pre-election period, several electoral disputes have led to violence. Last week, a candidate of the National Movement of Amhara (NaMA), who was competing for the state council of  Benshangul/Gumuz in Wonbera Woreda, Metekel Zone, was killed in the Karbar area of Metekel Zone (National Movement of Amhara, 9 April 2021). NaMA is an Amhara nationalist party with the objective of defending the interests of the Amhara ethnic group, both in the Amhara region and outside the Amhara region. Over the past year, Metekel zone has been one of the most violent areas in the country with most fatalities being linked to attacks by unspecified ethnic militias on ethnic Amhara civilians (for more details See EPO’s Metekel conflict page). Since NaMA’s party platform advocates for the interests of ethnic Amharas, the assassination of the candidate in Metekel is likely an attempt to deter the party’s participation in the upcoming election in the region.

Clashes related to the question of self-determination within the SNNPR are challenging the region’s peace and security. Around 7 April 2021, 12 civilians were killed and eight injured in attacks by militias associated with the Gumayde Peoples Special Woreda Return Committee in Bunit, Alfacho, and Abulo Kebeles of Amaro Woreda, Segen Area People’s Zone. More than 11,000 ethnic Koore were reported to be internally displaced following the attacks (Addis Standard, 8 April 2021). 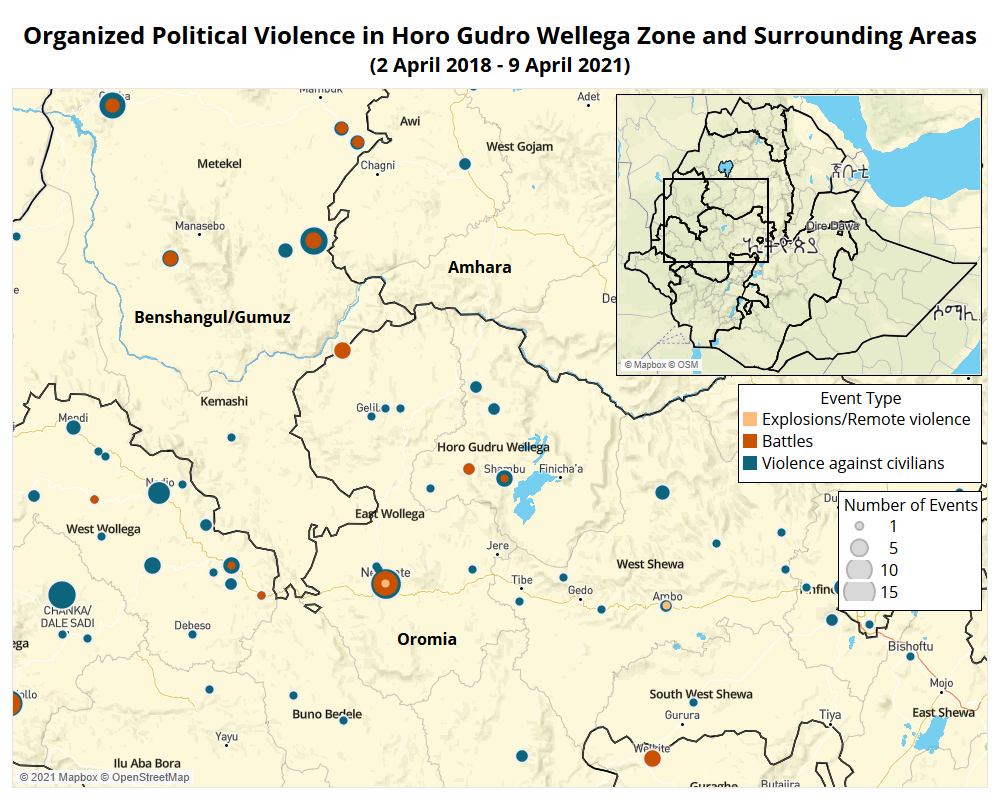 Around 7 April 2021, clashes between OLF-Shane militants and federal forces were reported in Abe Dongoro, (Horo Guduro, Oromia), and 39 OLF-Shane militants were killed while in rural areas surrounding Kombulcha (Horo Guduro, Oromia). An unspecified number of soldiers were killed. Due to the violence, hundreds of families were reportedly displaced into the Kombulcha town.

Between 2 and 4 April 2021, ten staff members at Jimma university were arrested on the grounds of attempting a coup and supporting the Oromo Liberation Army (OLA) (Addis Standard, 8 April 2020).

The previous EPO Weekly reported on clashes between Oromo and Amhara communities in the Oromo Zone of Amhara region and surrounding towns, with gunshots recorded in Majete, Ataye, and Dumuga towns. On 4 April 2021, 12 ethnic Oromo militants who had been wounded during clashes in Ataye were dragged out of an ambulance vehicle and killed by rioters in Shewa Robit town (North Wollo, Amhara).