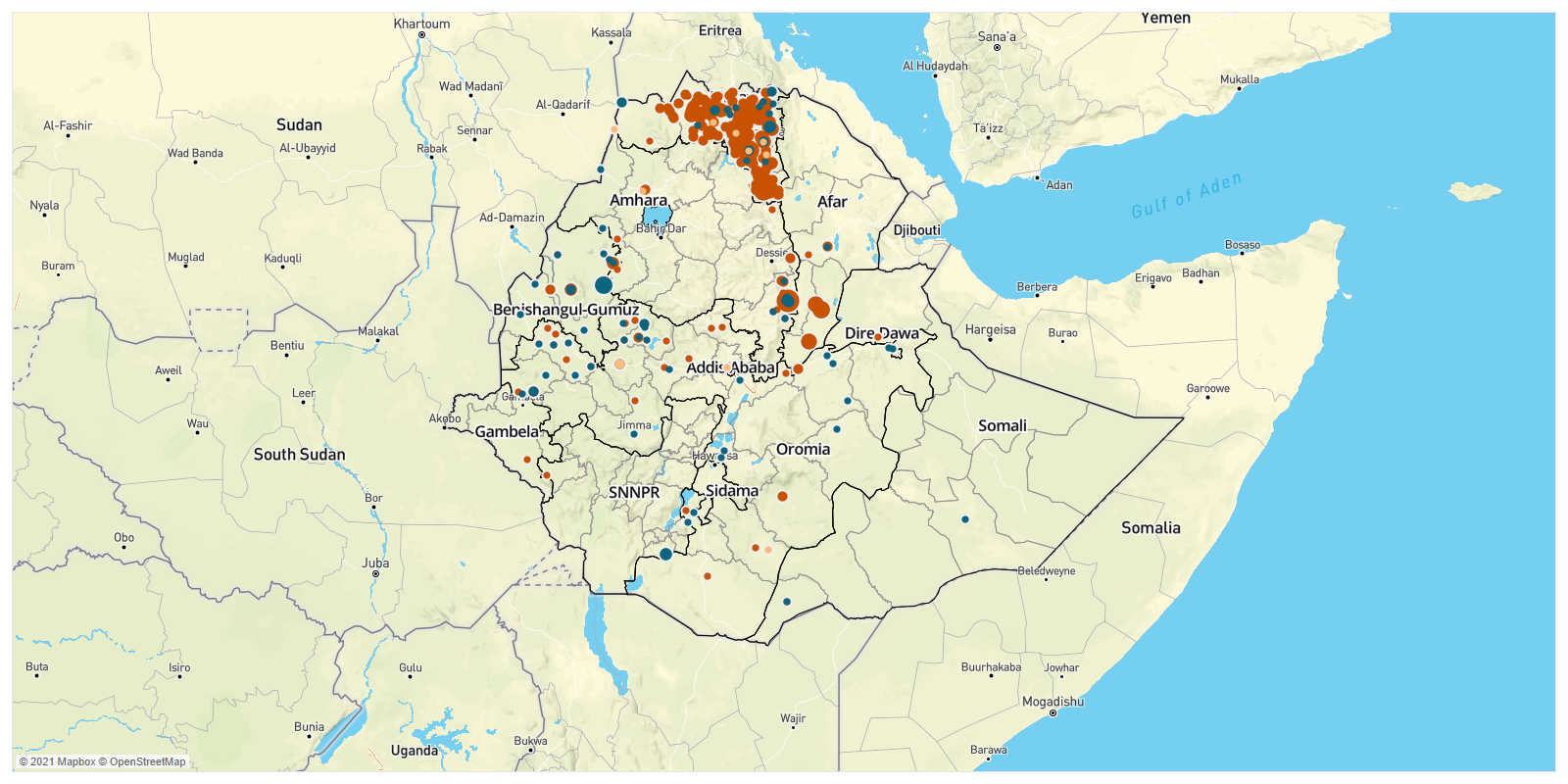 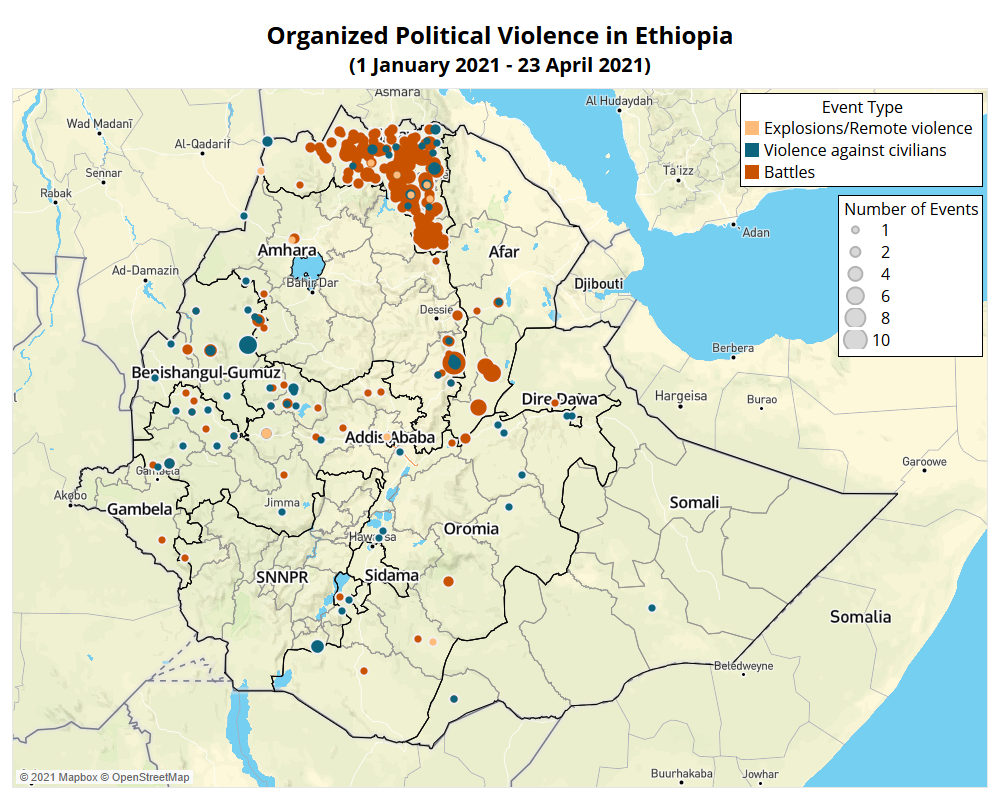 Last week, demonstrations were held in major towns across Amhara region, denouncing violent attacks by different actors and the displacement of Amhara civilians across the country. Demonstrators carried slogans urging the government to fulfill its responsibility to ensure the safety of citizens, with some denouncing the incumbent Prosperity Party’s alleged links with Oromo extremist groups. While most demonstrations were peaceful, on the third day of demonstrations, demonstrators clashed with security forces trying to disperse them in Bahir Dar city.

In Central Gondar, Amhara region, suspected militants from a Qimant ethno-nationalist group clashed with Amhara regional special police in the vicinity of Aykel town (Chilga), prompting the deployment of national forces and additional security troops into the area. 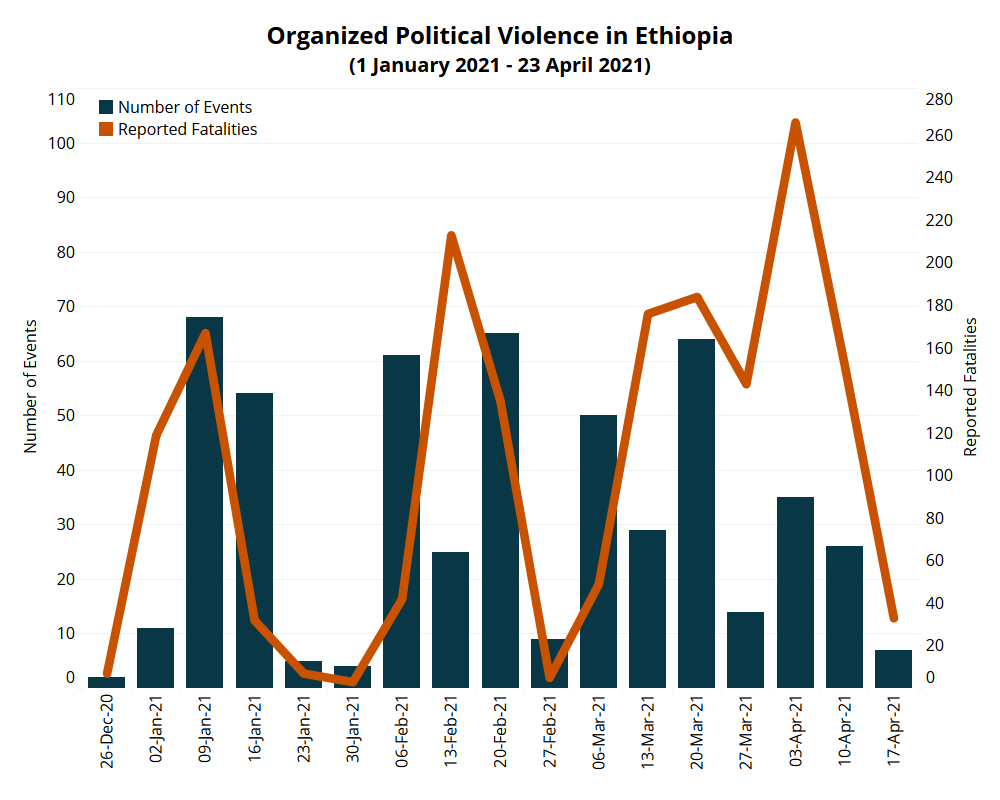 In the Tigray region, sporadic clashes occurred in several areas as TPLF associated forces battled against Ethiopian and Eritrean forces. The United Nations Security Council released a statement acknowledging the efforts of the Ethiopian government to provide humanitarian assistance, but noted the continuing insecurity was hindering humanitarian operations (UNSC Press Statement on Ethiopia, 22 April 2021). In addition, on 22 April 2021, two top leaders of the Salsay Weyane Tigray party were arrested in Mekele city (DW Amharic, 23 April 2021). Even though the reason for their arrest was not made known, the party stated that their arrest is political and linked to their protest against the current insecurity of Tigray people in Tigray region.  The Salsay Weyane Tigray party, established after Prime Minister Abiy Ahmed came to power, is one of the four opposition parties that took part in the September 2020 Tigray regional election that was deemed illegal by the federal government.

Regional Focus: Demonstrations Against Targeted Killings and Displacement of Amharas in Amhara Region

Frustration with the Ethiopian government over their perceived lack of action in regard to the targeted killing and displacement of Amhara civilians by different actors throughout Ethiopia has contributed to an atmosphere of growing discontent in the Amhara region over the past two years. Demonstrations were sparked last week when violence in the North Shewa and Oromo zone of the Amhara region reached a new peak following the previous clashes between Oromo and Amhara communities in the Oromo zone of Amhara region and surrounding towns from 18 to 31 March. A group of gunmen — believed to be a combination of militants from the Oromo Liberation Front (OLF)-Shane and local Oromo militias — attacked the towns of Ataye Shewa Robit, Karakore, Mekoya (Antsokiya), Ephrata Gidim, and Majete (for more details, see last week’s EPO-Weekly). Violent clashes and ethnically-targeted killing have led to an estimated 350 fatalities and 328,000 people being internally displaced from 18 to 31 March and from 16 to18 April 2021 (DW Amharic, 22 April 2021, Africa News, 4 April 2021, Reuters, 20 April 2021). 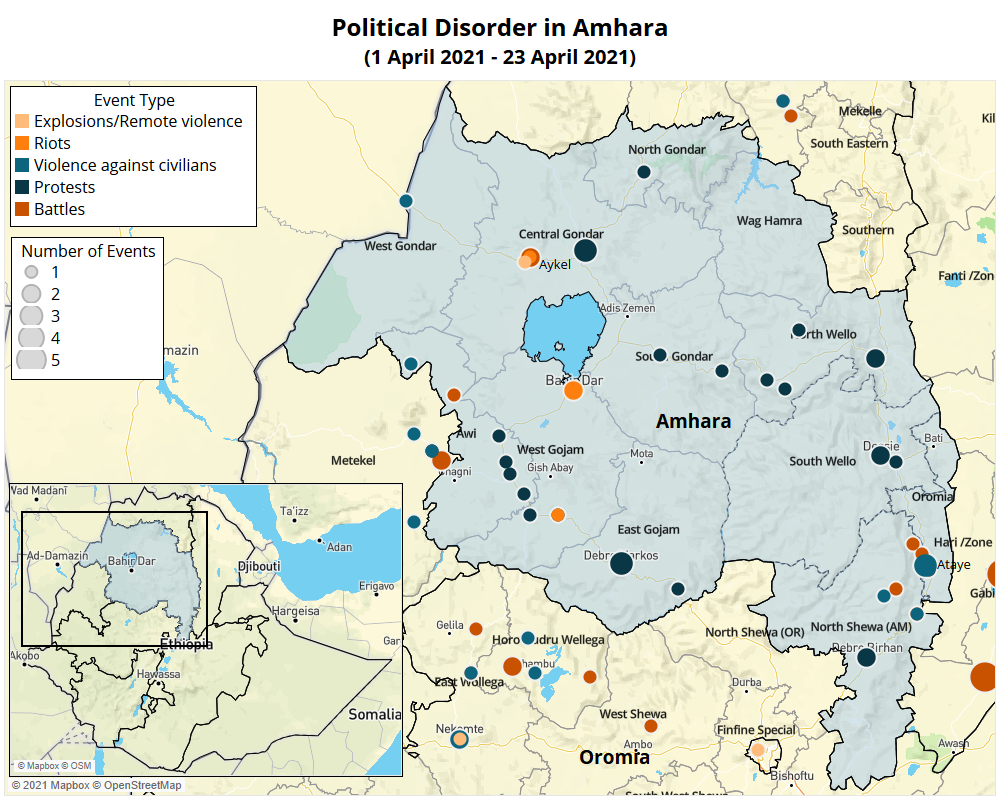 In Bahir Dar, demonstrations turned violent on the third day when protesters blocked roads and clashed with security forces who tried to disperse them. According to reports, four demonstrators, as well as 30 security forces, were injured (DW Amharic, 23 April 2021; Amhara Communication, 23 April 2021). Authorities later stated that the regional government recognizes the demands of the demonstrators and is working together with the Oromia regional government to take appropriate measures (Amhara Communications, 21 April 2021).

Continued violence targeting ethnic Amhara throughout the country is deeply damaging to the Prosperity Party’s ability to retain voter confidence in Amhara region. Even staunch supporters of the Prosperity Party recognize problematic divides between the Amhara and Oromo camps of the party. The recent unprecedented levels of violence in March and April 2021 in Amhara region appear to be a tipping point for voters who no longer feel confident that the Amhara Prosperity Party can provide security for the state. Discontent and frustration towards the government’s lack of or delayed response to attacks on ethnic Amhara throughout Ethiopia has driven deep divides between the Oromo and Amhara regional governments, who trade blame for the breakdown in security.

There is also a sense that the ethno-nationalist party — the National Movement of Amhara (NaMA) — is gaining ground given the perceived incompetence of the Amhara Prosperity Party officials to solve the issue. This has caused alarm for ethnic minorities within the Amhara regional state, namely the Qimant, who clashed with Amhara regional special forces throughout last week after a town hall meeting turned violent, resulting in the deaths of 32 people (Addis Standard, 22 April 2021; Amhara Communication, 23 April 2021; Amhara Media Corporation, 19 April 2021).

Last week, two top party members of different political parties were killed in Amhara region. These killings are linked to the recent instability in the region.  Around 16 April 2021, an Ethiopian Citizens for Social Justice (EZEMA) party candidate for Eferatana Gidem woreda (North Shewa, Amhara region) was killed by an unidentified armed group in Ataye town during clashes between OLF-Shane (and local Oromo militias) and the Amhara regional special forces and federal troops (Ethiopian Citizens for Social Justice, 21 April 2021).On 21 April 2021, a NaMA party member, who was the leader of the party’s youth organization, was shot and killed in Metema (West Gondar, Amhara region) (National Movement of Amhara, 22 April 2021). Election-related violence has continued to increase as the election draws near.