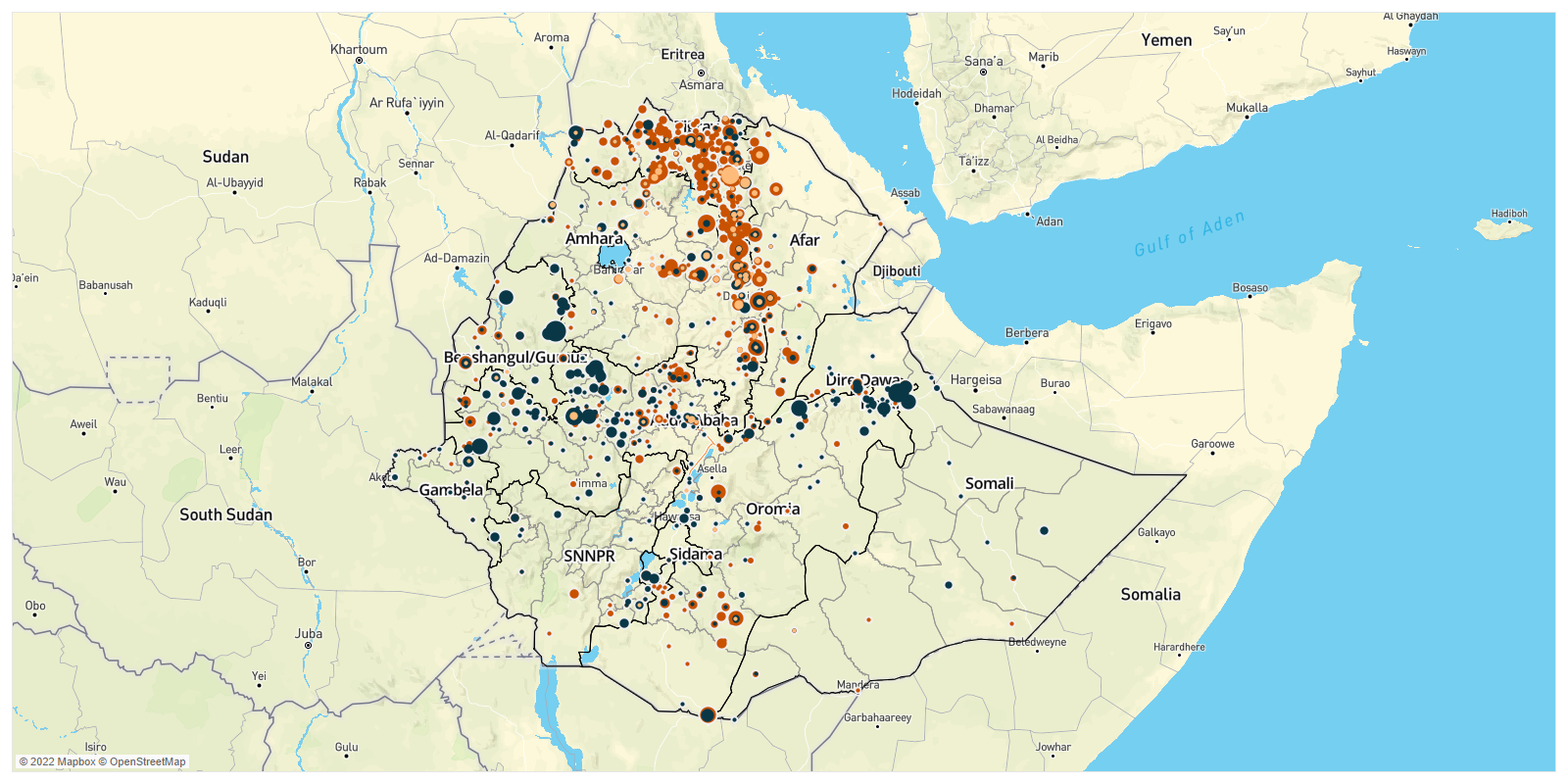 By the Numbers: Ethiopia, 16-22 April 2022 2Some events from this coverage period might be included in the data in subsequent weeks due to reporting delays. 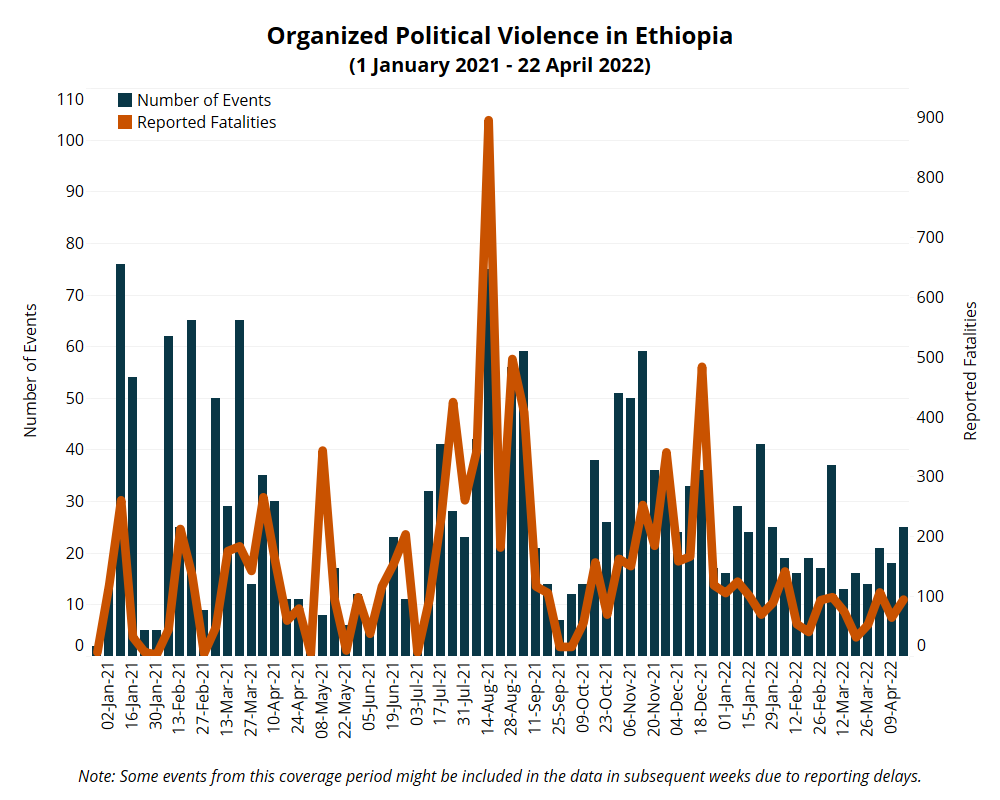 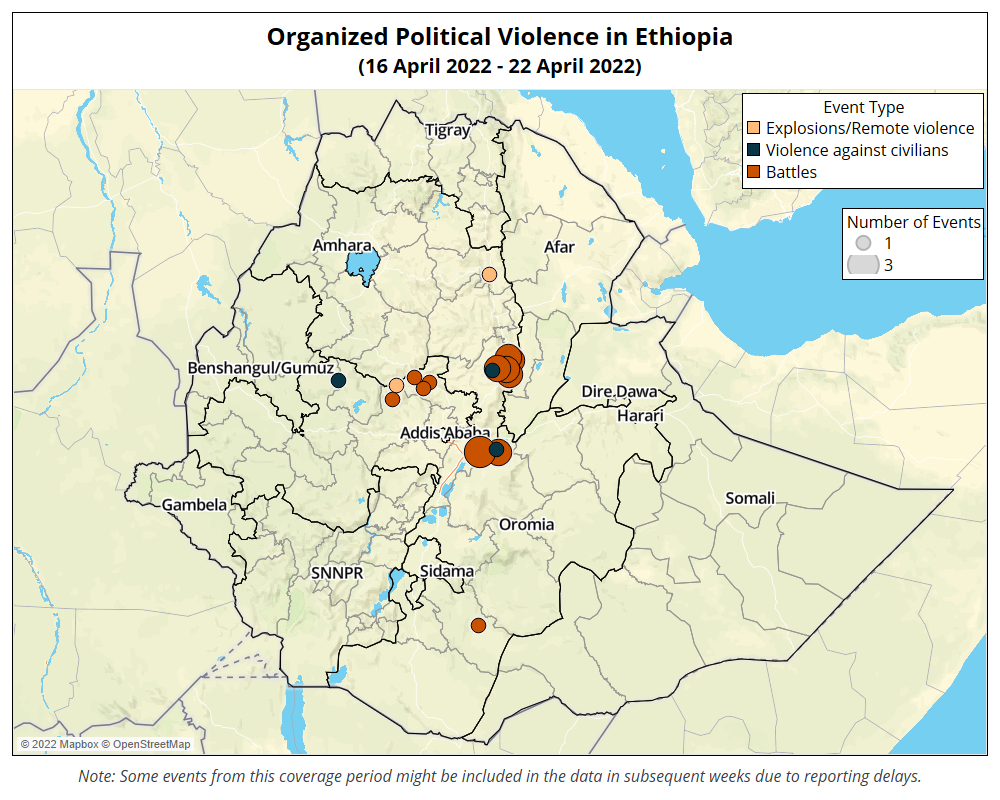 Oromia special zone in Amhara region is one of the most consistently violent locations in Ethiopia. Since 2018, several rounds of violence have erupted in the area, resulting in the destruction of infrastructure, displacement of civilians, and loss of life. As an important location along the A2 highway, the area is subject to historical claims by the Amhara, Oromo, and Afar ethnic groups. Violence over the past week represents another escalation in worsening tensions between Amhara and Oromia regions (see EPO Weekly: 9-15 April 2022 for more information on the most recent round of fighting).

Oromia special zone of Amhara region was founded as a response to pressure from the OLF, which had been demanding autonomy for the Oromo-speaking population during the early transition period from 1991 to 1992 (Sarah Vaughan, 2003). Since then, competing claims over the territory and its administration by ethnic Oromos, under Amhara region, have been the basis for regular conflicts. Furthermore, conflict over pasture between ethnic Oromo and Afar pastoralists is also frequent.

Last week, clashes re-ignited at the border areas of North Shewa and Oromia special zones in Amhara region. In Oromia special zone, fighting occurred in Wesen Kurkur, Mute Facha, and Tikure Wadawo in Jilye Tumuga woreda. In North Shewa zone, armed clashes were recorded in Zembo, Addis Alem, and Negeso kebeles in Efratana Gidem woreda, and Kewet in Menze Mama Midir woreda. There are competing claims about the actors involved and who initiated the armed clashes, with reports indicating that at least 20 people were killed and 48 others injured as a result of fighting in these woredas. In North Shewa zone, 125 houses were burned and more than 3,000 people were forced to flee their residences, while in Oromia special zone, an unknown number of people from three kebeles were internally displaced (DW Amharic, 21 April 2022).

Destruction of infrastructure due to clashes was most serious in Molale village in Zembo kebele in Efratana Gidem woreda in North Shewa zone. The main road connecting the capital city, Addis Ababa, to Dessie town was closed for several days due to ongoing fighting. Public institutions and business centers in Shewa Robit town along the main A2 highway were also closed. Amhara regional special forces and the federal police were involved to control the armed clashes. At least two members of Amhara regional special forces were killed by one of the warring parties during an operation to control the clashes. According to the Efratana Gidem woreda administrator, fighting erupted after the OLF-Shane attacked and killed one farmer in the woreda. This account was refuted by the head of the Jilye Tumuga woreda communication who blamed Fano militias for shooting at herders in the woreda (BBC Amharic, 21 April 2022). Previously, in April 2021, the OLF-Shane and local Oromo militias attacked Ataye town, the capital of Efratana Gidim Woreda, and surrounding areas. Due to frequent conflicts in the area, Ataye town is completely destroyed (see EPO Weekly: 10-16 April 2021 and EPO’s Conflict Profile page Kemise Conflict for more details on the tensions between North Shewa and Oromia special zones in Amhara region).

Renewed conflict in areas surrounding Oromia special zone in Amhara region is a microcosm of the rest of Ethiopia, where conflicting claims over territory, national direction, and ethnic homeland claim all intersect. According to some reports, ethnic Oromo residents in the area believe that armed groups from neighboring Amhara areas are insisting that Oromia special zone be dismantled (Addis Standard, 19 April 2022). Competition between armed groups from Oromia and Amhara regions is one of the most dangerous trends in the country today.

As fighting in Ethiopia’s north between TPLF and federal government forces has decreased, other smaller conflicts have resurfaced throughout Ethiopia. While these smaller conflicts are in most cases over territory and resources, larger political conflicts are also at play. Over the next few years, Ethiopians will decide their national direction, method of governance, and internal boundaries through the established National Dialogue Commission. The conflicts in contested areas, like Oromia special zone in Amhara region, are likely to be subjects of political debate and escalated fighting is to be expected unless a fair and transparent decision-making process is established.