ACLED is pleased to announce the Ethiopia Peace Observatory (EPO), a new initiative to enhance local data collection and analysis on political violence and protest trends across the country.

Ethiopia is currently experiencing high levels of conflict and instability. After popular uprisings brought seismic changes to Ethiopian politics, the country is now at a crossroads, with intense debate over questions of identity and governance under Ethiopia’s ethno-federalist system. The opening of political space has led to multiple violent administrative contests as groups driven by ethno-regional nationalism compete for formal recognition, authority, and territory. These conflicts have only been exacerbated as the country moves toward a national election set for later this month.

Despite Ethiopia’s importance as a lynchpin for peace in a turbulent region, information on the many conflicts occurring within the state is difficult to acquire. To meet this challenge, ACLED has launched the EPO to serve as a dedicated platform for governments, media, civil society, and the public to access reliable information and analysis about political violence and unrest across the country. By making data and analysis openly available, the EPO will foster connections and shared understanding between government institutions, humanitarian organizations, local civil society groups, the international community, and more.

Ethiopia’s current media landscape is distorted by biased sources and disinformation. In an effort to overcome these obstacles, the EPO examines and triangulates the details of all reported conflict events around the country. Data and analysis produced by the EPO are reviewed through a rigorous internal system to ensure that they represent the most accurate, confirmed information available at the time. ACLED is a living dataset, and data collected as part of the EPO project are continuously updated with the latest reports as they emerge. To minimize the spread of mis- or disinformation around contentious events, the EPO requires multiple sources that specify relevant dates, places, and perpetrators in order to meet the standards for inclusion in the dataset.

All information is accessible through the new EPO website, where an interactive tracker maps the latest data and links to reviews of current conflicts, actors, regional issues, and cooperation efforts, updated weekly. The EPO  also produces a regular bulletin of conflict news in Amharic and English, weekly updates on all active conflicts, monthly analysis of major developments, and special reports on emerging trends and thematic issue areas.

In addition to monitoring conflict, the EPO will also track information on cooperation and peace processes initiated by the government or civil society actors, with a view toward supporting data-driven peacebuilding efforts around the country. The EPO will work to facilitate open dialogue about the project’s data and analysis as well as the latest conflict developments through workshops, discussions, and interviews — all available to the public. 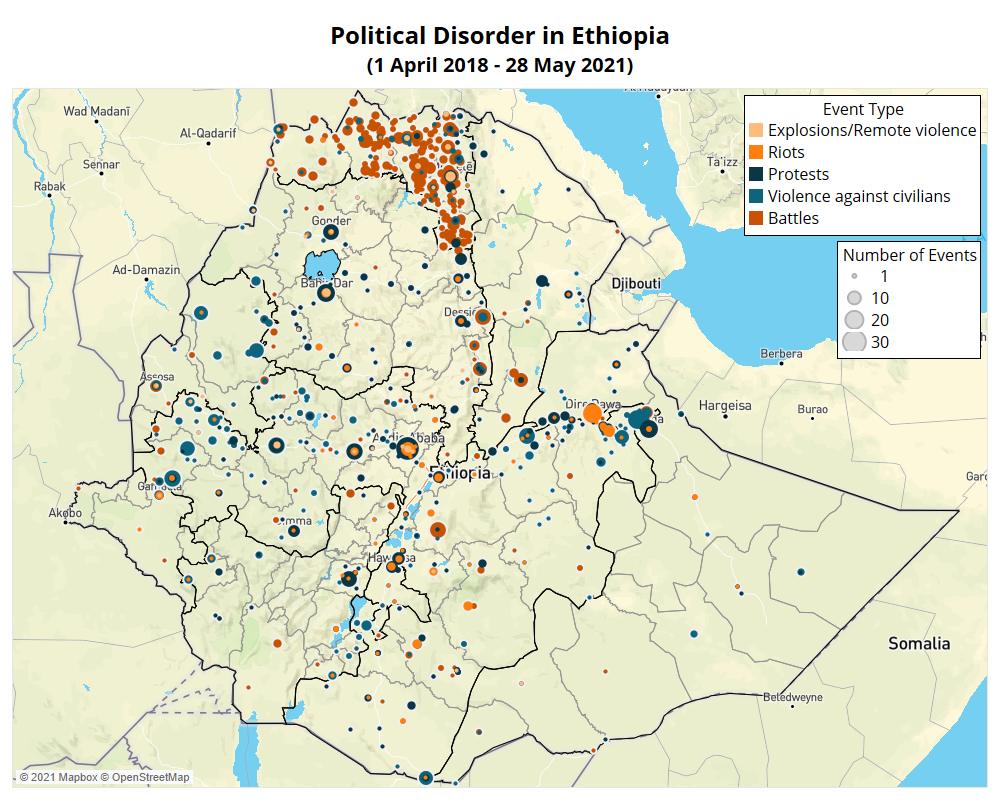 The EPO is a project of ACLED, a global non-profit crisis-mapping organization based in the United States. EPO data are collected through ACLED and sourced in English, Amharic, Oromiffa, and Tigrinya. At launch, the ACLED-EPO dataset contains thousands of historical data points drawn from local, national, and international sources, with new real-time data added each week. ACLED only uses information from trusted sources that are reliable, robust, and thorough. ACLED aims to report and conduct analysis in a manner that is transparent, unbiased, and accessible. Visit the main ACLED website to download data and access additional analysis and methodology resources. For more information about the EPO, check the EPO FAQs.