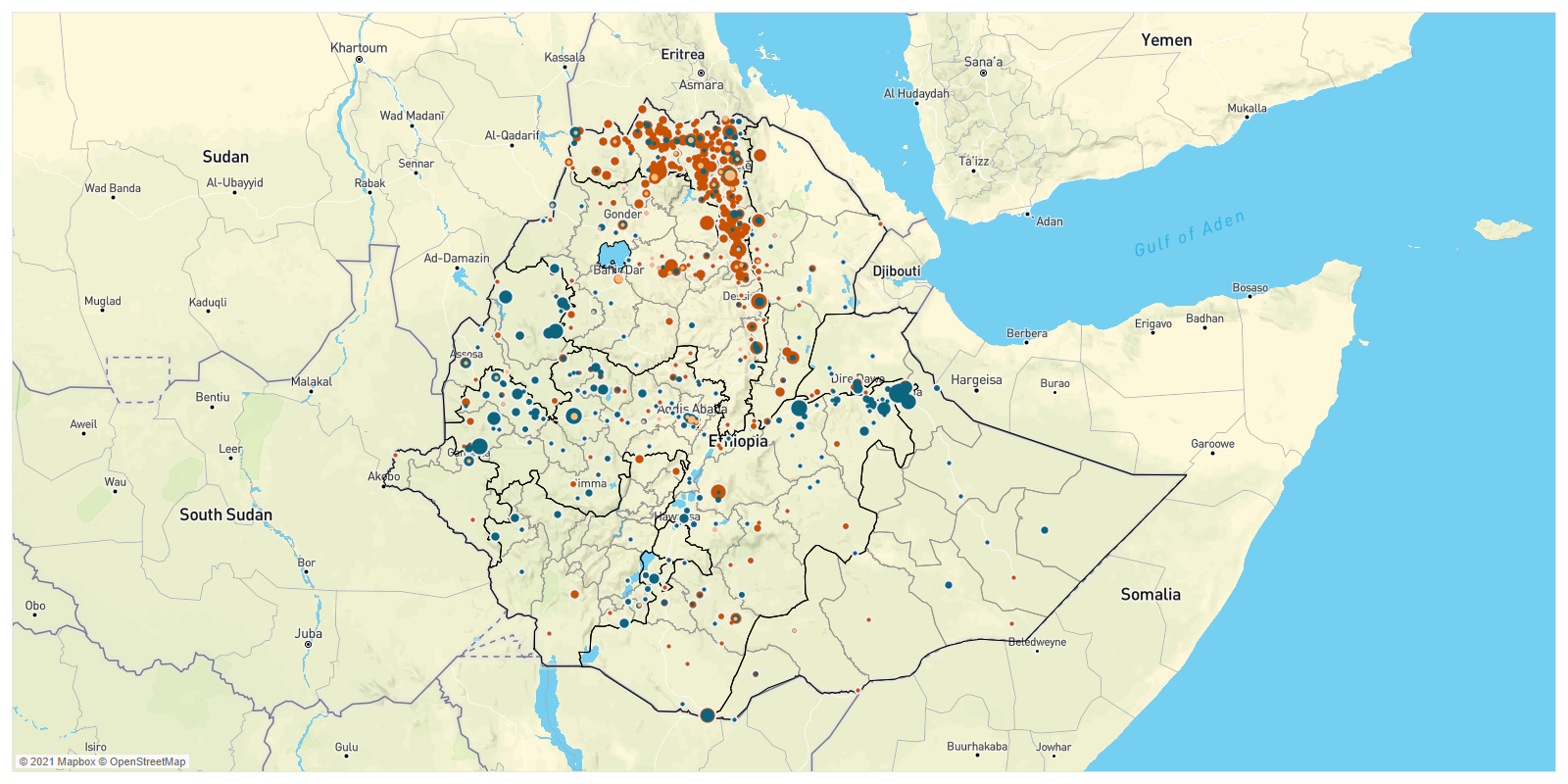 By the Numbers: Ethiopia, 28 August- 3 September 20212Some events from this coverage period might be included in the data in subsequent weeks due to reporting delays. 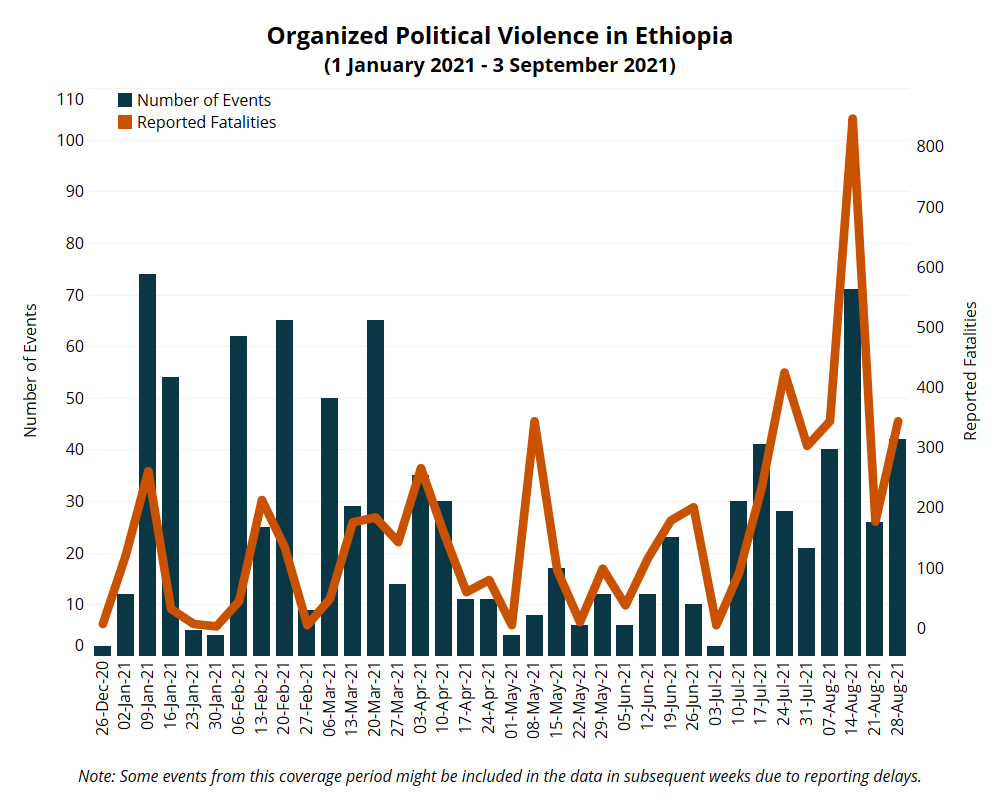 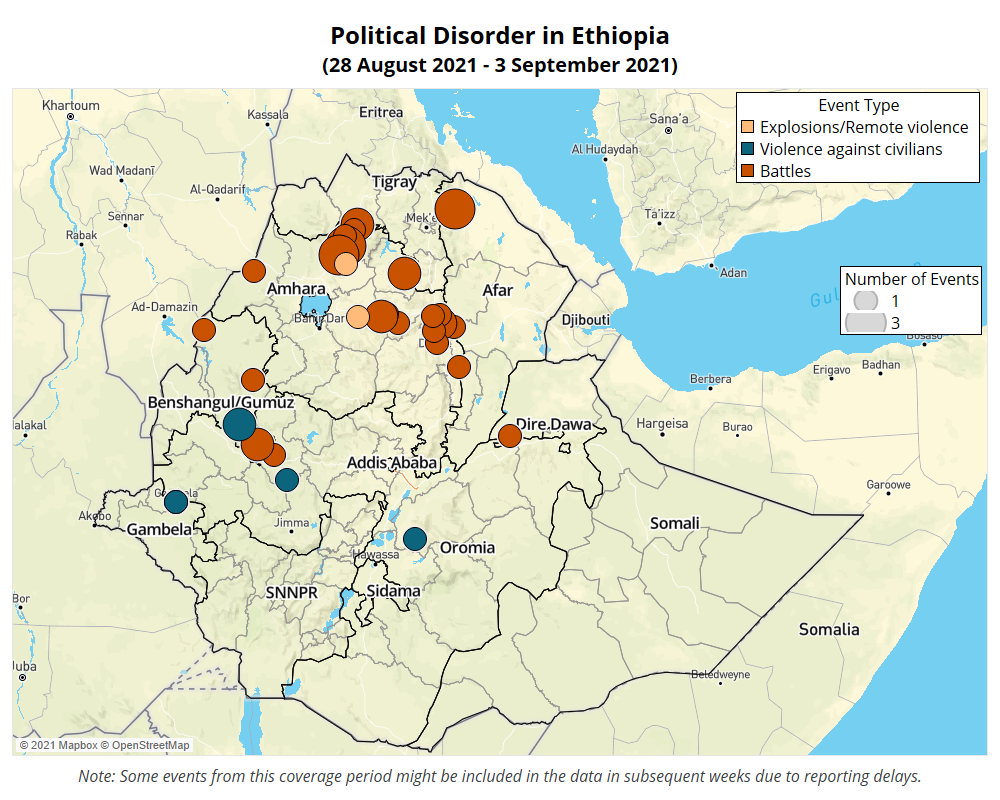 Several reports emerged last week detailing the damage caused by TPLF forces in different areas of the Amhara region that were previously controlled by TPLF forces. Reportedly, TPLF forces looted and destroyed private houses, businesses, health care centers, schools, and government institutions in Sekota, Addi Arkay, Nefas Mewecha, Gayint, Hara, Checheho, and Gasay (ESAT, 30 August 2021; EBC, 31 August 2021; Amhara Media Corporation, 29 August 2021a; Amhara Media Corporation, 29 August 2021b; AP News, 3 September 2021). According to the Ministry of Education, around 700 schools in both Amhara and Afar regions have been damaged by TPLF (Ministry of Education Ethiopia, 1 September 2021). Before conflict migrated out of the Tigray region, government forces were accused by several organizations of using schools and other public civilian buildings as military bases, resulting in the destruction or damaging of around 25% of all school buildings in the region as the fighting progressed (HRW, 28 May 2021)  Currently, 1.4 million students are not attending school due to conflict in Ethiopia (Ministry of Education Ethiopia, 1 September 2021).

As well, as reported on 3 September 2021, TPLF forces looted the United Nations International Children’s Emergency Fund (UNICEF) food storage center in Gayint (ESAT, 30 August 2021). TPLF forces also looted USAID warehouses in different areas of the Amhara region as confirmed by the Mission Director of USAID to Ethiopia (EBC, 31 August 2021). TPLF denied the alleged looting and stated that most of the lootings were “mainly orchestrated by local individuals and groups” and asked for an independent investigation (Getachew K Reda, 1 September 2021).

Last week, TPLF sent a letter to 52 countries asking them to pressure the federal government to the negotiation table (Tigray Tv, 4 September 2021). In the letter, TPLF asked for unlimited access to humanitarian aid and for the removal of the fuel and supplies blockade by the federal government.

In addition to the conflict in the north, violence against civilians was also recorded in other parts of the country. On 30 August 2021, five members of an armed group first shot and killed one person and injured two more people in an area 4km away from Gambela city. Subsequent clashes resulted in the deaths of two more people and another three injuries  (ESAT, 31 August 2021). According to the Gambela regional government, the attack was conducted by Gambela Liberation Front, formerly known as Gambela People’s Justice for Peace and Democratic Movement party (Reporter, 5 September 2021). The party was reportedly interested in inciting violence after failing to gain seats in the sixth regional election which was held in June 2021. Although the Gambela region has a history of violence, over the past few years, it has been one of the more peaceful regions in the country. However, since the June election, ACLED has recorded a number of attacks that have resulted in fatalities.

In Benshangul/Gumuz,  a number of incidents of violence against civilians with a high number of fatalities were recorded last week. On 30 and 31 August 2021, militants associated with the Gumuz People’s Democratic movement reportedly attacked Belo Jiganfoy town in Kemashi zone, clashing with Benshangul/Gumuz region special forces. According to police, the militants reportedly killed over 50 people (mostly women) over the span of two days (VOA Amharic, 2 September 2021; ESAT, 3 September 2021). On the same days, the group attacked and killed an unspecified number of civilians and government officials in five woredas in the Kamashi zone (ESAT, 3 September 2021). On 31 August 2021, unidentified armed men shot and killed five kebele militia members and injured two others in the Eri Bekentu area of Bulen woreda in the Metekel zone (ESAT, 31 August 2021). The kebele militias were heading to Bulen woreda to collect weapons necessary for the protection of their kebele.

In the Oromia region, on 31 August 2021, members of the Oromo Liberation Front (OLF)-Shane attacked a police station in Sasiga woreda in the East Wellega zone, wounding as many as 40 police officers and releasing at least six prisoners (BBC Amharic, 2 September 2021).

Meanwhile, civilians accused of having links with the TPLF continue to be detained in Ethiopia. Last week, 284 people were arrested by federal police in Addis Ababa. Federal police reportedly seized a number of weapons while searching the homes and workplaces of those arrested (Addis Standard, 31 August 2021).

The Tigray conflict, which erupted in November 2020, has expanded to Amhara and Afar regions. In July 2021, TPLF forces expanded southwards and gained control of areas in the Amhara and Afar regions. While old conflicts continue in disputed territories throughout the country, new conflict trends have also emerged over the past few weeks in Ethiopia.

Previously, most clashes in Tigray, Amhara, and Afar regions occurred between trained soldiers or militias. Recent reports indicate, however, that individuals — farmers or groups that are outside the command of formal security sectors — are clashing with TPLF forces in different areas of the Amhara region. Reports indicate that a variety of weapons are being used by these individuals to fight TPLF forces.

As happened in the Tigray region in 2020 and the first half of 2021, elites in the Amhara region are using accounts of looting and killing of civilians to push individuals who are not traditionally associated with an armed group to join formal armed combat. Moreover, the regional government is encouraging everyone to fight TPLF forces and, in some cases, allowing the individuals to keep whatever weapon they capture from TPLF forces (Amhara Media Corporation, 16 August 2021; Addis Standard, 18 August 2021).

Similarly, last week, another armed group affiliated with TPLF tried to enter Ethiopia through Sudan, clashing with ENDF and Amhara regional special forces in the Almehal area in Guba woreda in Metekel zone in Benshangul/Gumuz (FDRE Defense Force, 3 September 2021; ESAT 3 September 2021; Amhara Media Corporation, 3 September 2021). According to reports, the main purpose of the group was to disrupt the construction of The Grand Ethiopian Renaissance Dam (GERD). ENDF claimed that 50 members of the armed group were killed while 70 others were injured (FDRE Defense Force, 3 September 2021). Violence by groups allied with the TPLF is thus likely to continue.