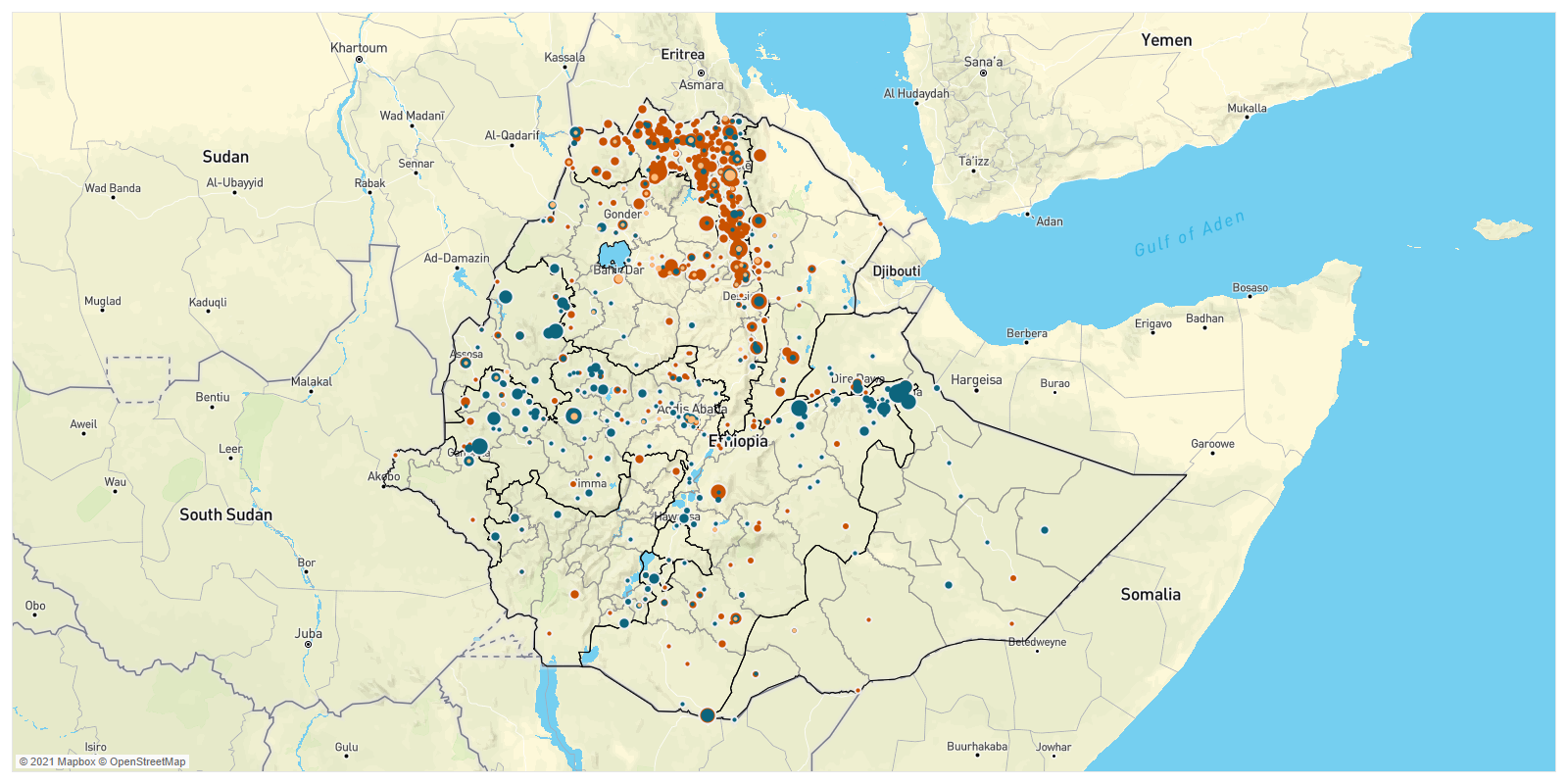 September at a Glance 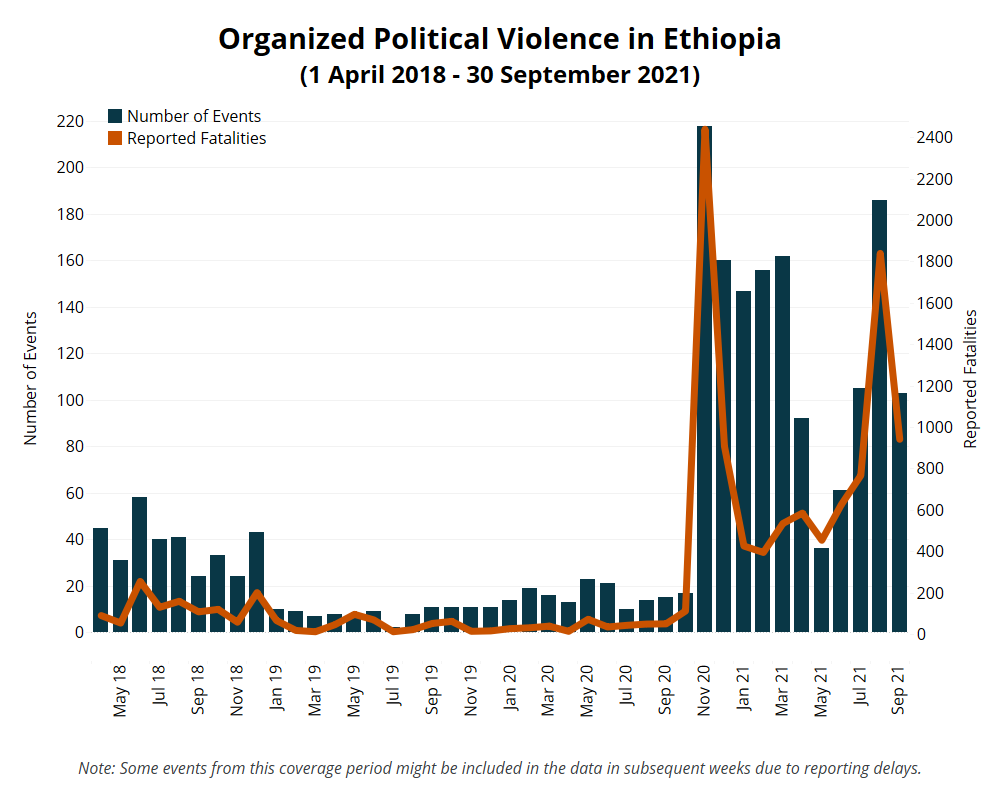 On 11 September 2021, Ethiopians celebrated the new year. Although celebrations occurred as normal in the capital and the rest of the country, many people have expressed concerns about the ongoing conflict in the north and its consequences on Ethiopia’s economy and people’s wellbeing.

During the first half of September, over 40 armed clashes with nearly 400 reported fatalities were recorded between TPLF and government forces across Tigray, Amhara, and Afar regions. The highest number of fatalities were recorded in the North Gondar zone when TPLF forces battled Amhara militia in Chenna for five days, leading to the reported deaths of at least 120 people in early September (Reuters, 9 September 2021). In contrast, in the last half of September, only two armed clashes were recorded (see map below). Despite the decline in the number of armed clashes, there are signs indicating both the TPLF and government forces are reorganizing to continue fighting in areas currently controlled by TPLF forces. 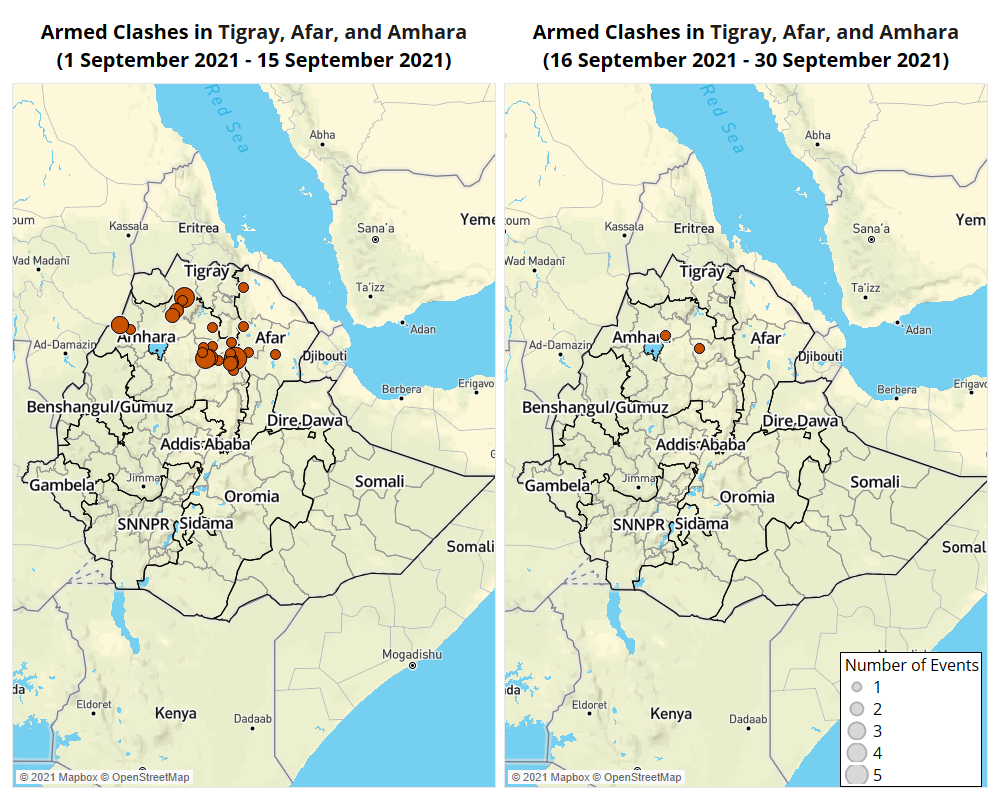 Before June 2021, the humanitarian crisis in Ethiopia was largely contained within the Tigray region. The expansion of the conflict into the Amhara and Afar regions has increased the number of people in need of humanitarian aid. Compared to other zones within the Amhara region, the South Wello zone is currently hosting most of the internally displaced people from Wag Hamera and North Wello zones. At the beginning of September, the government announced that around 400,000 people were internally displaced from Afar and Amhara regions because of the conflict. Another four million people were on the verge of needing humanitarian assistance in both regions (EBC, 6 September 2021). The United Nations Office for the Coordination of Humanitarian Affairs (UNOCHA) has stated that 1.7 million people are food insecure due to the conflict in Amhara and Afar regions (OCHA, 2 September 2021).

Many farmers have not been able to farm their lands properly in conflict-affected areas in the Amhara region. It is unknown whether farmers in the Tigray region were able to farm during this rainy season. One of the reasons provided by the government when announcing a unilateral ceasefire and withdrawing from the Tigray region was the need to allow farmers to work their fields during the rainy season. According to UNOCHA, only 320,000 hectares of farmland out of 1.3 million hectares have been cultivated in the Tigray region (OCHA, 2 September 2021).

In the Oromia region, the areas where OLF-Shane is active have increased. Most violence against civilians during September was recorded in Kirmu woreda in the East Wollega zone (see map below). According to residents, most areas in Kirmu woreda are controlled by OLF-Shane. In addition, around 300 people of Amhara ethnicity were internally displaced from Dano woreda in the West Shewa zone due to frequent attacks by OLF-Shane. Government forces were also responsible for violence against civilians as the Oromia regional special forces shot and killed two civilians in September. Furthermore, 11 armed clashes between OLF-Shane and ENDF and Oromia regional special forces were recorded in September. These clashes occurred in North Shewa, East Wollega, Arsi, Guji, Horo Guduru, West Wollega, and East Hararge zones.

Instability in Benshangul/Gumuz region continued throughout the month, with TPLF affiliated forces expanding into the Metekel zone. Around 3 September 2021, an armed group affiliated with TPLF clashed with ENDF and Amhara regional special forces in the Almehal area in the Metekel zone, when the group tried to enter Ethiopia through Sudan. This clash represents the expansion of the conflict between TPLF and ENDF into a new region, as for the past few months TPLF forces have mostly clashed with government forces in Tigray, Amhara, and Afar regions.

Violence between state forces and other separatist groups also spread into the Kamashi zone. By the end of September, ENDF forces had entered the Kamashi zone, following weeks of the zone being under the control of the Benshangul People’s Liberation Front. The front is a separatist group that is fighting against regional and federal forces.

In September, four peaceful demonstrations were held in Ethiopia. Two of the demonstrations were held against armed groups, with demonstrators attempting to make clear that such groups do not represent their interests. On 13 September 2021, residents of the Kamashi zone demonstrated against attacks by armed groups in Kamashi town in Benshangul/Gumuz. Nevertheless, on 24 September 2021, Gumuz militias attacked civilians in Mersha and Ekfet in Sedal district, kidnapping 145 ethnic Gumuz people and killing at least two. The group reportedly accused the kidnapped people of not supporting them. Security forces responded to the attack by clashing with the militants in a rural location nearby.

On 30 September 2021, the sixth general election was held in areas where the election was not held in June 2021. Voting was held in some election constituencies in Southern Nations, Nationalities and Peoples Region (SNNPR) (specifically, 31 election constituencies in SNNPR for regional council seats and 22 election constituencies in SNNPR for House of Representatives), as well as in Harari and Somali regions. Moreover, Konta Special woreda and West Omo, Bench Sheko, Dawro, and Sheka zones held a referendum deciding whether the aforementioned zones and special woreda would be allowed to form a new (eleventh) region of Ethiopia or continue to be administered under SNNPR. Overall, the election day was peaceful in all three regions, and there were no incidents of violence reported.

Monthly Focus: Obstacles to Reporting on Conflicts in Ethiopia

Ethiopia is at a crossroads and has been since current Prime Minister Abiy Ahmed was appointed in April 2018. Along with a dizzying number of changes to Ethiopia’s governing structure and personnel, the federal government’s attitude toward journalists and reporting has changed significantly since Abiy took power. When Abiy was elected, he promised that he would open up the space for mass media (broadcasting, publishing, and the internet) — and he did for a time. As violence has spread throughout the country and reached catastrophic levels in the north, Ethiopia’s media space has become more restricted, with journalists facing threats from rebel groups and government forces alike.

EPO research indicates that Ethiopia’s media environment has changed significantly over the past year, in what appears to be a reaction to a heavily polarized society and increasing pressure from the government. Increasingly, reports provide one-sided accounts of conflict and omit relevant factors that could legitimize the “other side.”

Many outlets and journalists work to overcome these challenges and produce objective reporting, despite the risks. Yet, the risks to the media continue to intensify, and independent reporting is coming under greater threat. Conflict environments are already ‘low-information’ spaces, as the identity of perpetrators, victims, the intensity of violence, and its outcomes are difficult to accurately ascertain in real-time. In Ethiopia, these difficulties are compounded in a highly polarized environment where ethnic identities can place even non-combatants on one side of a conflict.

Ethiopia’s infrastructure also poses a challenge to journalists. Journalists struggle to reach far-flung areas where militant groups operate, resulting in information gaps and “hidden conflicts,” such as those in Benshangul/Gumuz region. For example, government forces recently claimed to have killed “hundreds” of militants attempting to breach Ethiopia’s border with Sudan (ESAT, 6 September 2021; Amhara Media Corporation, 7 September 2021). Despite such a high fatality claim, there have been no additional reports and no further information is available to verify the allegation.1EPO codes 10 fatalities in certain cases where fatalities are known to have occurred, but the exact number is unknown. Thus, this incident was coded with 10 fatalities instead of “hundreds” as claimed by the government due to a lack of further information. In other incidents, in locations where conflict is thought to be less severe, unknown fatality estimates will usually be coded as three (for more on ACLED’s fatality methodology, see FAQs: Fatality Methodology).

In the conflict between TPLF forces and Amhara regional militias, there have been several high-fatality incidents over the last month that have impacted civilians. Local Amhara officials allege that 119 “innocent farmers, priests, children, and women” were killed in a small village called Chenna (BBC, 8 September 2021). Some reports, however, indicate that those killed were involved in the active conflict against TPLF forces. This could be a result of regional officials encouraging civilians to mobilize against the TPLF, turning a political dispute into a full-fledged civil war between ethnicities.

In the absence of objective, reliable reporting on the conflict, both parties are mobilizing supporters using different narratives. TPLF leaders are using accounts of atrocities to mobilize support, with Amhara elites making similar allegations, in turn, to mobilize civilians to fight TPLF forces, creating a cycle of accusations and incitement. The Amhara regional government is encouraging locals to fight TPLF forces and, in some cases, allowing individuals to keep whatever weapons they capture from the TPLF (Amhara Media Corporation, 16 August 2021; Addis Standard, 18 August 2021). The Amhara regional government and elites have called for a “public wave” to defend the region against TPLF forces (Amhara Media Corporation, 16 August 2021). This call was reportedly made in response to TPLF mobilizing and drafting civilian Tigrayans (Tegarus) into the war. Thus, individuals who are outside the command of formal security institutions, who are not trained, are clashing with TPLF forces in different areas of the Amhara region.

The lack of information, biased reporting, and restrictions on reporting create an environment where policy decisions are made with incomplete information. Rather than limiting the media, there is a need to allow for greater media freedom so that journalists can report objectively and better policy decisions can be made in turn.