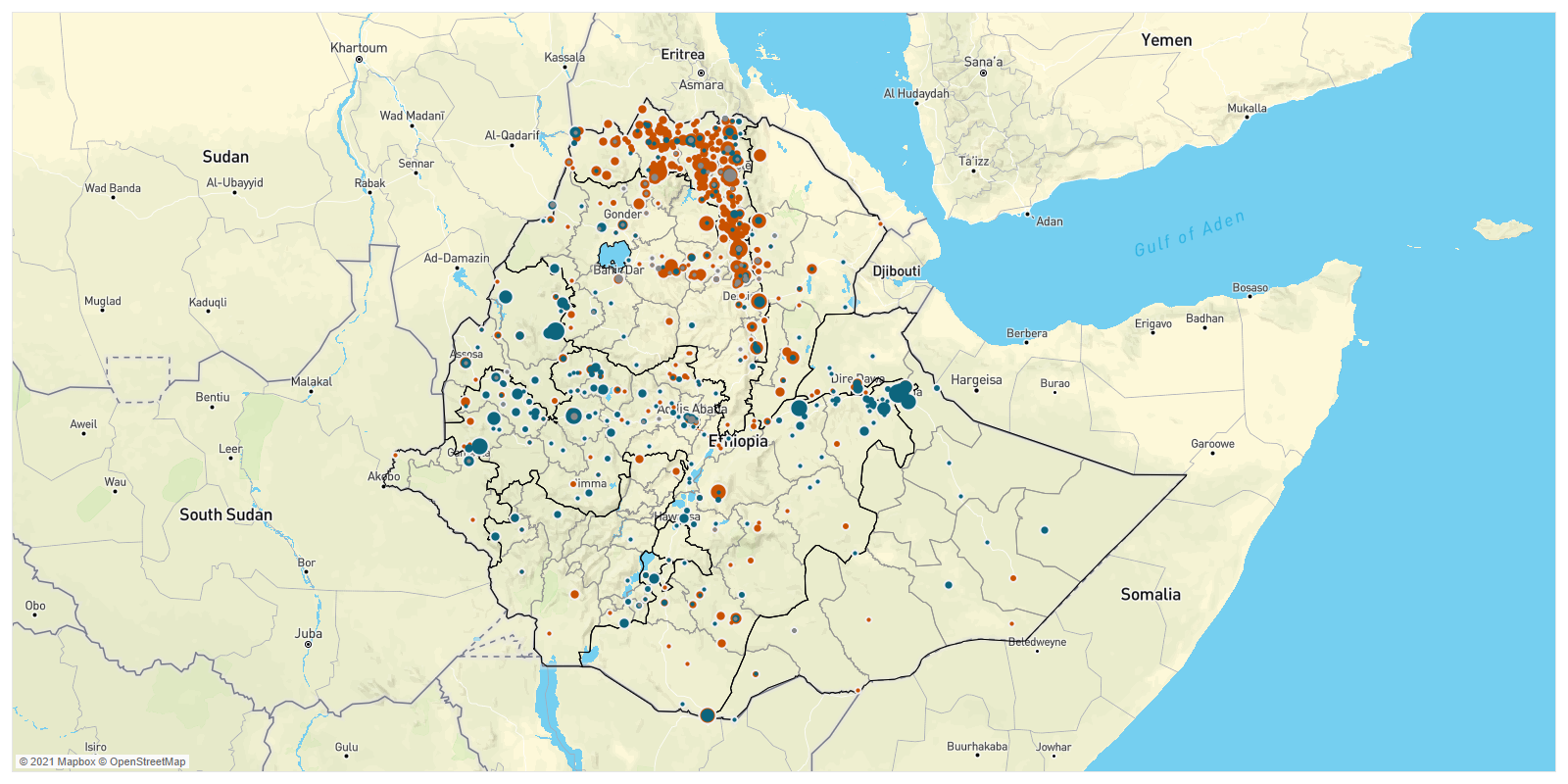 By the Numbers: Ethiopia, 16-22 October 20212Some events from this coverage period might be included in the data in subsequent weeks due to reporting delays. 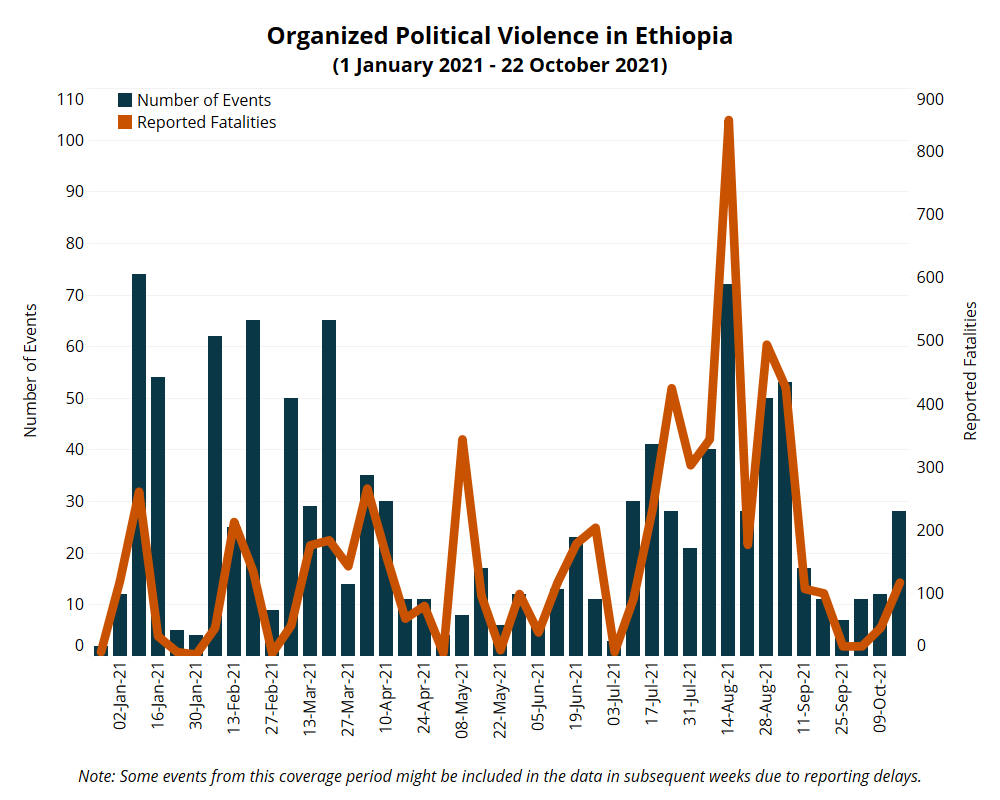 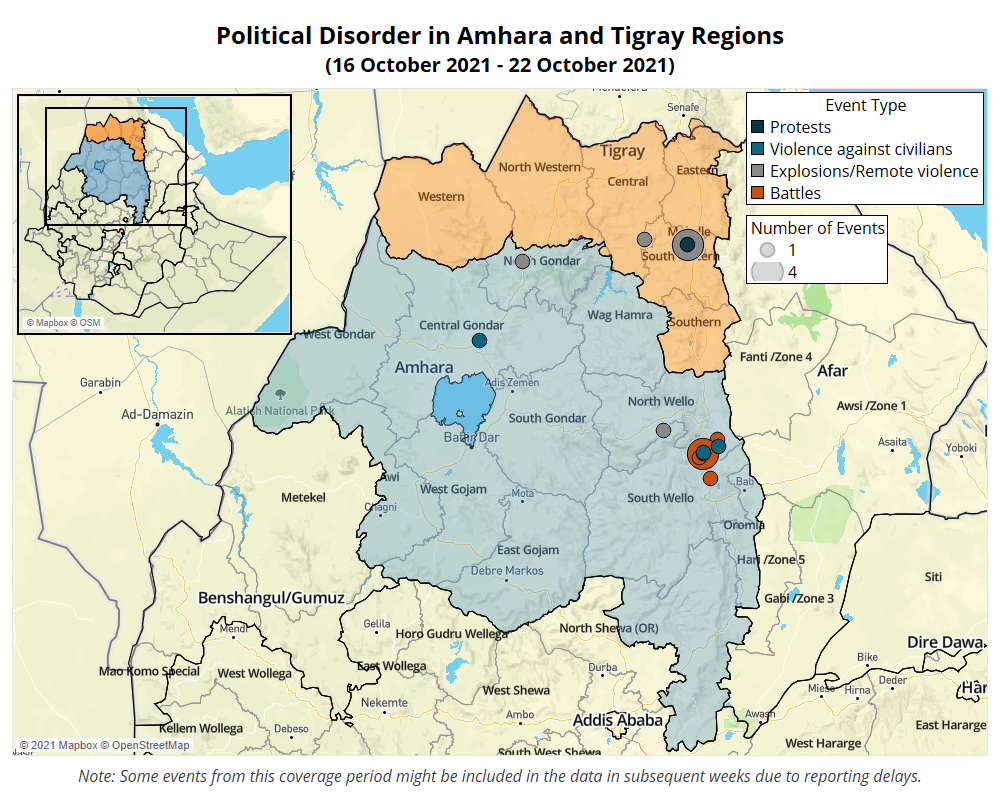 The Amhara regional government has called for mass mobilization throughout the region and encouraged individuals to travel to both North and South Wello zones to defend the area from further TPLF attacks (Amhara Media Corporation, 21 October 2021). At the beginning of the week, authorities from the South Wello zone administration made a similar call to the public (Amhara Media Corporation, 18 October 2021).

In the Afar region, clashes have resumed after a lull in September. Armed clashes between TPLF and ENDF, accompanied by Afar regional special forces, were reported last week in the Chifra area which borders the Amhara region.

Civilians continue to suffer due to armed clashes. In the Amhara region, around 250 people were displaced due to the fighting in Girana town last week, while TPLF fighters reportedly killed an unspecified number of civilians as they fled Habru woreda in the North Wello zone (Reuters, 23 October 2021). Furthermore, TPLF forces are allegedly harvesting farmlands within the Amhara region and taking the harvest to the Tigray region. Hence, the number of people in need of humanitarian assistance is expected to increase in the coming months. Similarly, due to the recent clashes in Afar, around 45,000 people have been internally displaced from Chifra and Megale woredas (BBC Amharic, 20 October 2021).

Also last week, on 18 October 2021, Oromo and Amhara ethnic militias clashed in Amuru town in the Horo Guduru Wollega zone. In the past few weeks, several clashes between Oromo and Amhara ethnic militias have been reported in areas of contested territory within the Oromia region (EHRC Press Release, 18 October 2021). Clashes between Oromo and Amhara communities have occurred periodically in these areas. However, more recently, these clashes have worsened in the context of decreased state security capacity due to the demand for additional troops in northern Ethiopia. Many reports from the area indicate that militias related to OLF-Shane are involved in the targeting of Amhara civilians in the area, a claim the group denies.

As battles rage between TPLF forces and ENDF and government-aligned forces, the Ethiopian military has begun an airstrike campaign against TPLF targets across the Tigray region as the rainy season comes to an end. Airstrikes against TPLF targets have been reported throughout the conflict. However, this is the first time since the beginning of the conflict in November 2020 that Ethiopian air force jets have struck TPLF targets in Mekelle city, the capital of the Tigray region. Airstrikes in Mekelle had last been recorded on 19 November 2020. Mekelle’s population has swelled as a result of displacement in rural towns throughout the war, placing a high number of people at risk in the case of errant strikes.

Remote violence, including airstrikes, has been an increasingly common feature of the Ethiopian war since August of 2021 when the TPLF’s advance southward through the Amhara region began to slow (see figure below). Other forms of remote violence used during the conflict include shelling using heavy weapons, especially by the TPLF. Recent artillery barrages against the towns of Wuchale (South Wello) and Chifra (located on the Afar/Amhara regional border) reportedly led to the death of 30 people. A recent statement by the TPLF that Dessie city was within artillery range of their forces sparked panic in the city and the price of transportation in North and South Wello zones skyrocketed as civilians attempted to flee (Ethiopian Insider, 21 October 2021). Infrastructure throughout Tigray, Afar, and Amhara regions has been damaged as a result of an increasing reliance on remote violence. 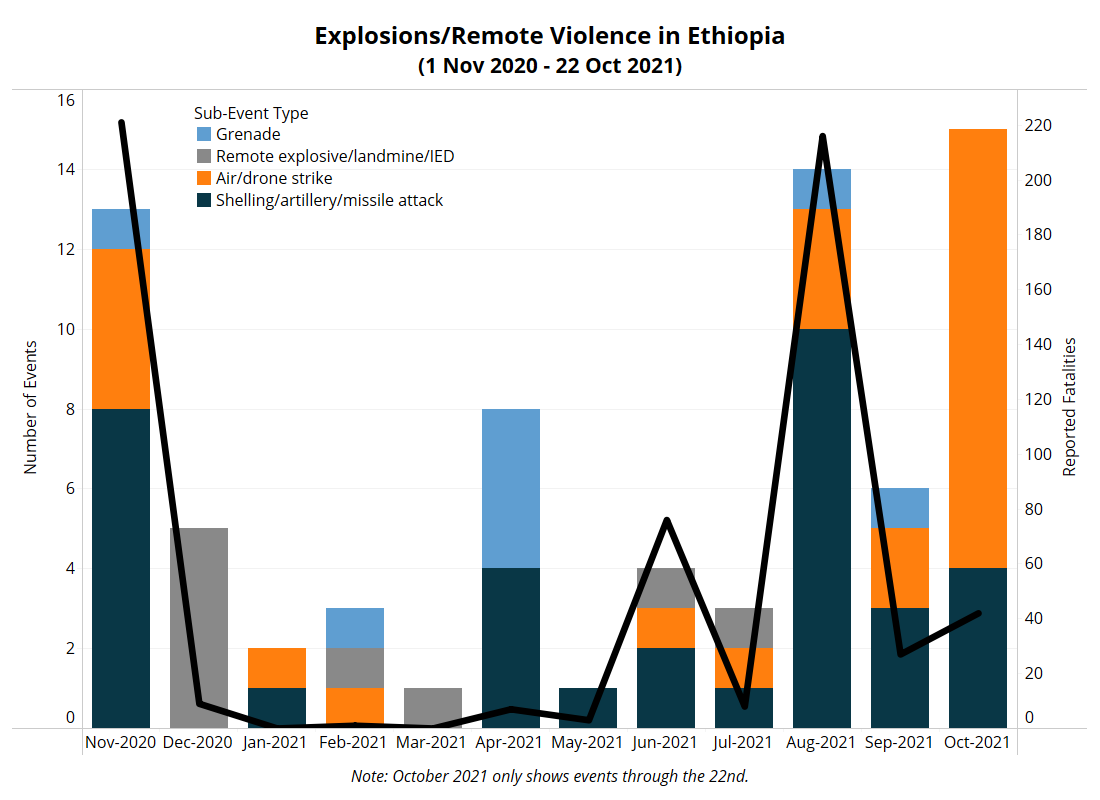 In comparison to the heavy shelling incidents reported throughout the war, the use of airstrikes by the Ethiopian government is a new trend. On 22 October 2021, Ethiopian jets conducted an airstrike on Mekelle as a scheduled UN flight carrying humanitarian workers was inbound, forcing the UN flight to abort the landing (Reuters, 23 October 2021). The UN has since suspended all flights to Tigray, citing concerns of risk to aircraft from indiscriminate fire (Relief Web, 6 October 2021).

TPLF officials have accused the Ethiopian military of using the UN flight as cover from anti-aircraft fire, a claim that may have some credibility given that the UN flight was scheduled with Addis Ababa authorities before departure. Ethiopian government officials have claimed that tower operators in Mekelle forced the flight crew to abandon landing and insisted that the strike was carried out with “extreme caution” (The Ethiopian Ministry of Foreign Affairs, 23 October 2021).

Both the TPLF’s recent advances southward and the government’s use of airstrikes against TPLF targets indicate that the war in Ethiopia is intensifying. Both sides seem unconcerned about the threat of sanctions. The government’s willingness to schedule an airstrike within a similar time frame as a scheduled humanitarian flight illustrates an ever-worsening relationship between the UN and the Ethiopian federal authorities. Both the ENDF and TPLF seem likely to continue to use remote violence going forward. This threatens both civilians and civil infrastructure as neither the TPLF nor the Ethiopian government have a good record of accuracy (Reuters, 19 October 2021; France 24, 26 August 2021).