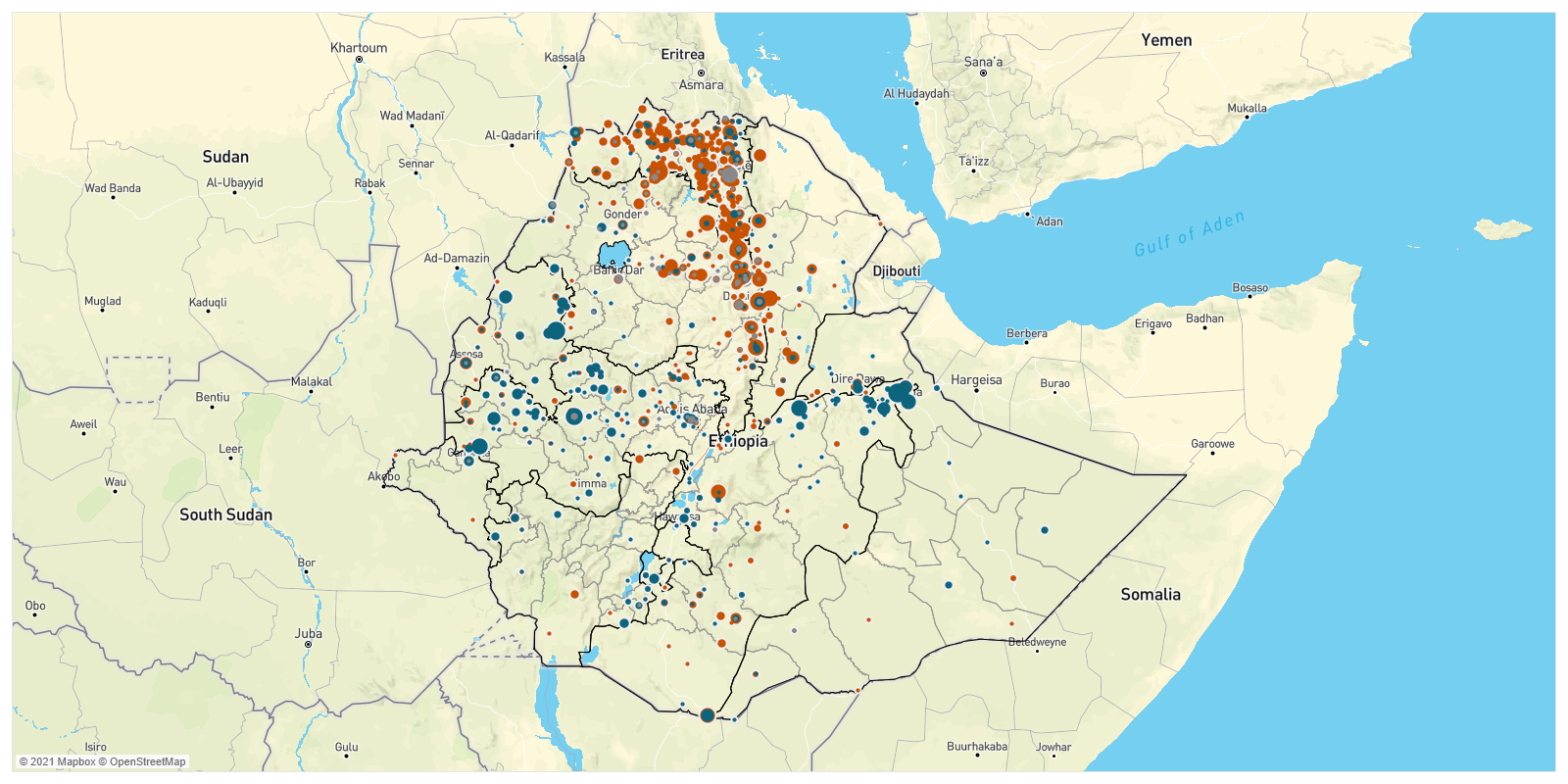 By the Numbers: Ethiopia, 20-26 November 20212Some events from this coverage period might be included in the data in subsequent weeks due to reporting delays. 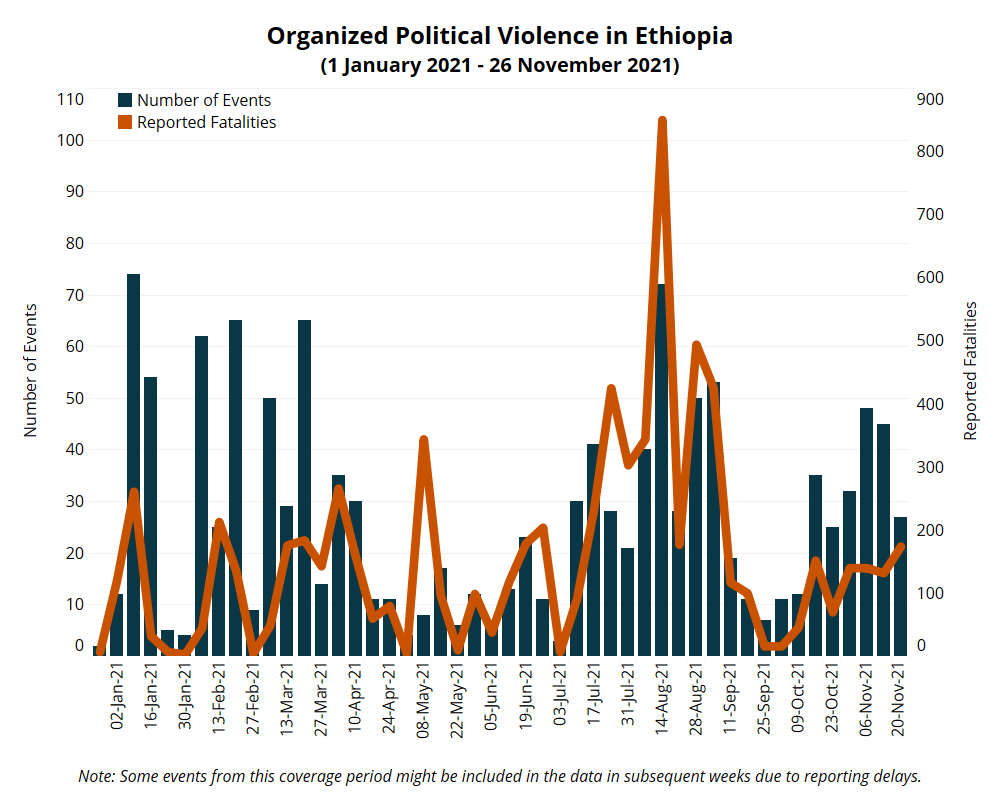 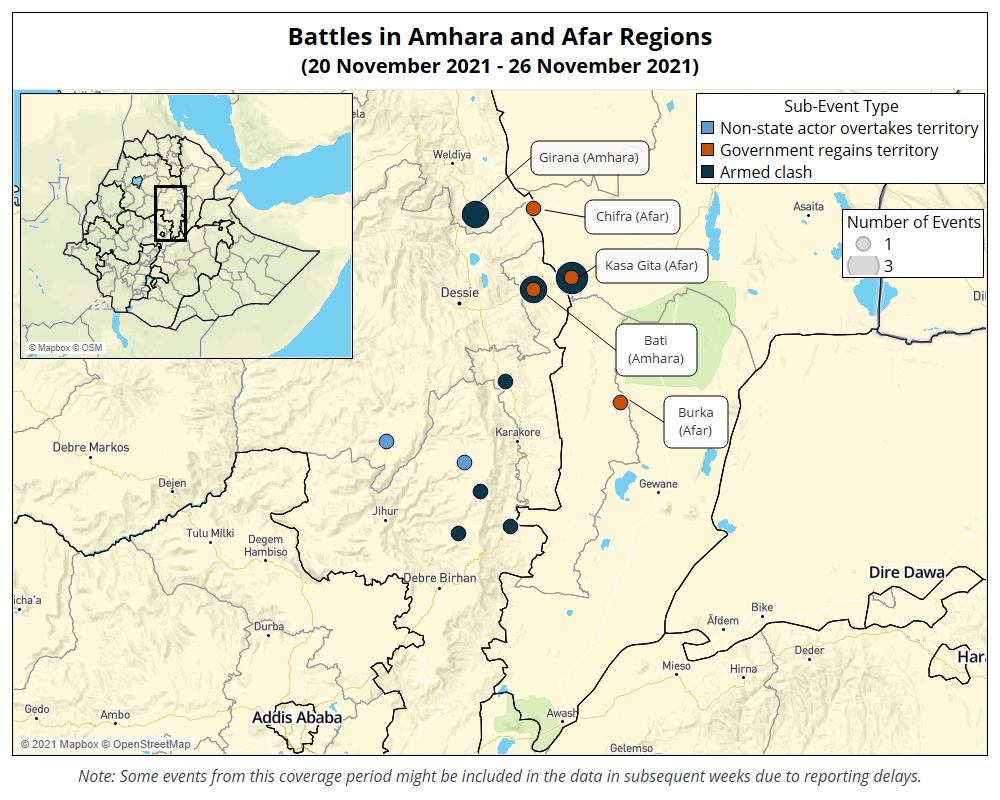 On 20 and 26 November, ENDF conducted drone-assisted airstrikes in Mekelle city in the Tigray region. It is unknown whether there were casualties due to the airstrike on 20 November. No fatalities were reported as a result of the airstrike conducted on 26 November (DW Amharic, 26 November 2021).

Residents of Addis Ababa continued to demonstrate last week against foreign countries’ interference in Ethiopia. On 25 November, thousands of Addis Ababa city residents gathered outside the United States (US) and United Kingdom (UK) embassies, demonstrating against perceived attempts to “dismantle the sovereignty of Ethiopia” (Africa News, 25 November 2021).  Frustration at perceived Western diplomatic support for the TPLF has grown, especially among residents of Ethiopia’s largest cities. Demonstrations with slogans denouncing foreign interference in Ethiopia and allegedly “fake” reports on the ongoing conflict in the north were held in more than 27 cities in South Africa, the US, UK, and other European countries under the slogan “No More” (Ethiopian Broadcasting Corporation, 21 November 2021; Ethiopian Broadcasting Corporation, 25 November 2021).

The number of people in need of humanitarian assistance has increased both in Amhara and Afar regions. In the Afar region, more than 100,000 people have been displaced (Office of the Prime Minister Ethiopia, 30 November 2021). More than 1.1 million internally displaced people (IDPs) are in the Amhara region (FDRE Government Communication Service, 27 November 2021). Since TPLF forces took control of Dessie and Kombolcha on 1 November, thousands of IDPs have been forced to relocate in the North Shewa zone (in Debre Berhan, for example) and in Bahir Dar, the capital city of the Amhara region. There are an estimated 9,000 IDPs in six makeshift shelters in Debre Berhan in the North Shewa zone (OCHA, 25 November 2021). Many of these IDPs have been forced to relocate multiple times as TPLF forces have moved southward through multiple urban centers.

In the Oromia region, OLF-Shane militants continued to clash with Oromia state forces and government troops throughout the week. Last week, the two parties clashed in Leka Dulecha woreda (East Wollega) and Yubdo woreda (West Wollega). OLF-Shane claimed to have seized control of these two areas (OMN, 21 November 2021). On 23 November, gunmen with suspected links to OLF-Shane ambushed and killed three officials in Mida Kegn woreda (West Shewa zone). The deputy administrator of the woreda was also injured in the attack. A spokesperson for the group has denied that his forces were involved (BBC Amharic, 23 November 2021).

Meanwhile, on 24 November, the eleventh region of Ethiopia — the South West Ethiopia People’s region — was officially formed. On 30 September, residents in Konta Special woreda, West Omo zone, Bench Sheko zone, Dawro zone, and Sheka zone held a referendum in which the majority decided to form a new region of Ethiopia rather than continuing to be administered under the Southern Nations, Nationalities and Peoples region (SNNPR). The new region will have Bonga town as its capital. However, the Bench Seko zone representatives have disputed this decision as it was made without following the agreed-upon procedures for selecting a capital (ESAT, 20 November 2021; Ethiopia Insider, 18 November 2021).

On the day following the official formation of the South West Ethiopia People’s region, an unidentified armed group ambushed a vehicle carrying civil servants traveling through the new region, killing four security forces and injuring six civil servants in Selam Ber kebele in Yeki woreda in Tepi town in Sheka zone. Two weeks earlier, the Sheka zone in the South West Ethiopia People’s region changed its administrative center from Kemasha to Tepi town, causing tension in a region with a history of violence. The head of the government’s peace and security office in the Sheka zone stated that this attack is not thought to be related to this dispute (Ethiopia Insider, 24 November 2021).

Headline news over the past few days in Ethiopia has highlighted what appears to be a successful offensive by Ethiopian troops against TPLF forces. By the end of the week, government forces were in full control of Kasa Gita and Burka towns along the Kombolcha-Bati-Mille route, as well as Chifra town to the north (Al Jazeera, 28 November 2021). According to the government, special operations by Ethiopian troops resulted in the death of 12 high-ranking military leaders of TPLF along the two fronts (FDRE Government Communication Service, 24 November 2021).

These latest developments represent a major reversal in the momentum of the government’s war against the TPLF. Setting aside military victories, the government is seeking to capitalize on a major propaganda push that has activists, politicians, and even long-distance runners with celebrity status in Ethiopia declaring their wish to oppose the TPLF through armed conflict (BBC 25 November 2021). Prime Minister Abiy Ahmed announced his decision to lead ENDF forces “from the front” on 24 November and has since been seen in several state-published broadcasts dressed in military fatigues meeting with ENDF commanders at the frontlines (EBC, 30 November 2021). Deputy Prime Minister Demeke Mekonnen has reportedly taken over the prime minister’s duties overseeing government functions (BBC Amharic, 24 November 2021).

The war in Ethiopia is being fought on many fronts, not the least of which involves information and controlling narratives about the conflict. Throughout the week, frustrated by a confused series of claims and counter-claims, the Ethiopian federal government clarified state-of-emergency restrictions for journalists by declaring that “the state of emergency prohibits unauthorized entities from announcing battlefront activities that have not been verified through the appropriate security channels” (Office of the Prime Minister of Ethiopia, 30 November 2021). Both local and foreign journalists have been warned repeatedly against the dissemination of “false information” (Addis Standard, 24 November 2021). The government also issued a warning to the US embassy after the embassy issued a terrorist attack warning on 24 November 2021 (Addis Standard, 25 November 2021). The Ethiopian government also declared four diplomats of the Ireland embassy in Addis Ababa persona non grata.

Information control has been both vital and damning for the Ethiopian government throughout the war in terms of public relations, both internal and external. The Ethiopian government sought to conceal the presence of Eritrean forces — and the atrocities they committed —  for months at the outset of the conflict (BBC, 23 March 2021). The blockage in reporting was so effective that reports of the death of hundreds of people in the city of Axum exactly a year ago was in question for months, despite happening in broad daylight in one of the largest cities in the Tigray region (BBC, 26 February 2021). Eritrean involvement in Ethiopia has been a major factor in the US government’s decision to impose sanctions against Ethiopian and Eritrean authorities (US Department of State, 12 November 2021) and a source of anger for residents of Tigray (Tigray Media House, 20 January 2021).

Yet, the government’s assertion that the international community is biased toward the TPLF — which was in power in Ethiopia for decades — also appears to have some support. Last week, a leaked Zoom meeting showed former US officials meeting with TPLF officials and vocalizing support for the group (Eliezer, 24 November 2021). Despite none of the participants of the leaked call being active in official positions within the US government, the Zoom meeting was evidence enough for many in Ethiopia that the US is not an impartial actor. It thus makes the work of the US special envoy, Jeffrey Feltman, difficult as it contradicts his assertion that Abiy and his government possess a “popular mandate that we recognize” and that the US “taking sides on behalf of the TPLF is pure fantasy” (US Department of State, 23 November 2021).

Military gains, be it by the government or by TPLF forces, only seem to harden the positions that Ethiopia’s various political factions have against one another and make dialogue even more unlikely. As both sides appear to believe that armed conflict is the solution, opinions have been hardened and both the TPLF and the Ethiopian government have taken measures to restrict information flows. Moreover, voices in Ethiopia’s academic and civil societies that adopt a more nuanced view of the causes for conflict in the country have been shunted to the side by internal and external actors alike in favor of one side or the other. Thus, although some efforts are still being made to bring the warring parties to the negotiating table, efforts are not likely to succeed in their current state, and violence is expected to continue.