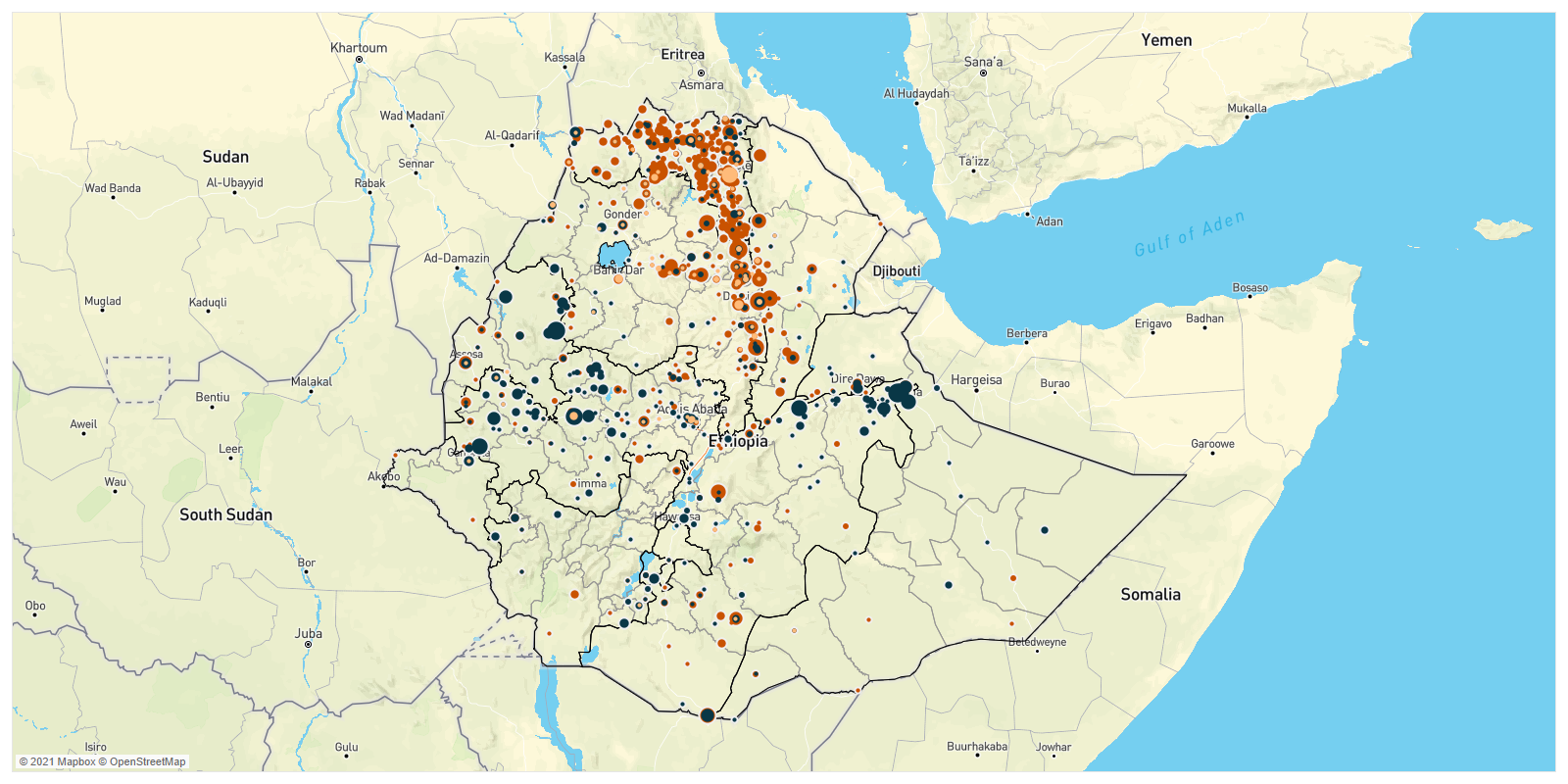 By the Numbers: Ethiopia, 4-10 December 20212Some events from this coverage period might be included in the data in subsequent weeks due to reporting delays. 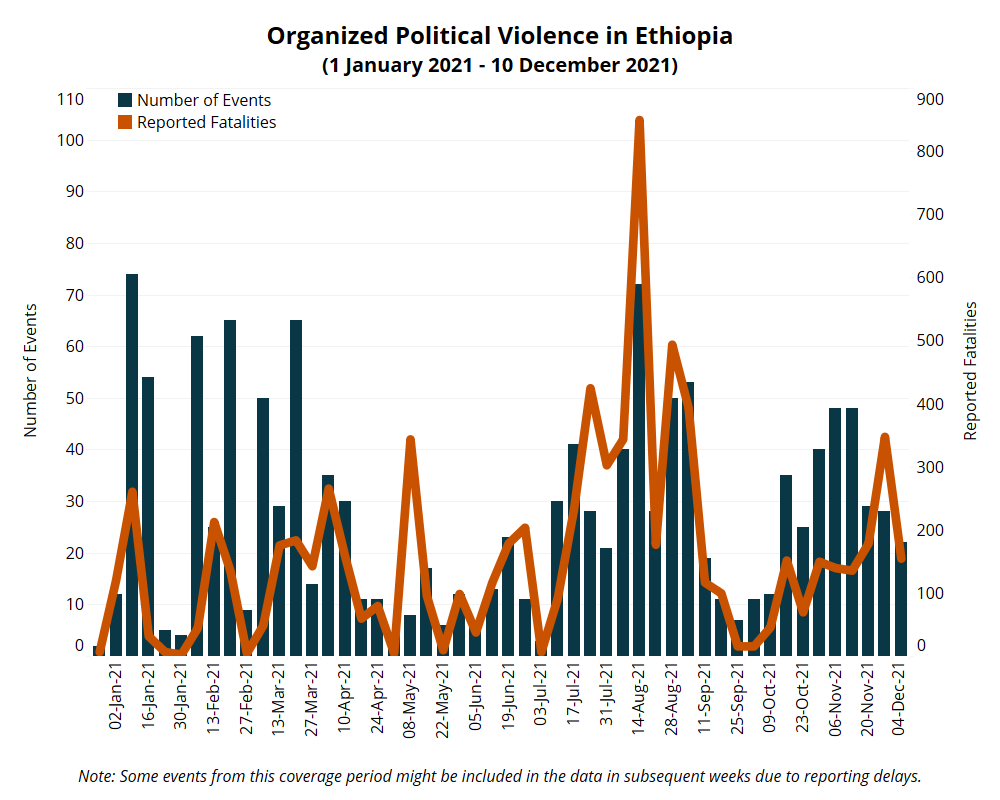 Throughout last week, forces allied with the federal government consolidated control over several areas of the northern Amhara region. Prime Minister Abiy Ahmed returned back to the office from the battlefront for a few days following what he called “a successful completion of the first phase of operation” (Office of the Prime Minister-Ethiopia, 8 December 2021). He has since returned to the frontline (AllAfrica, 13 December 2021). Sporadic clashes with remaining pockets of Tigray People’s Liberation Front (TPLF) fighters were reported in several areas surrounding Gashena in North Wello (see map below). As fighting slowed, incidents of looting and sexual violence were reported; mass graves were also discovered. TPLF forces were accused by both independent and government-associated media of killing civilians and destroying vital infrastructure. The TPLF’s actions in Amhara and Afar regions will be discussed in further detail in the Weekly Focus below. 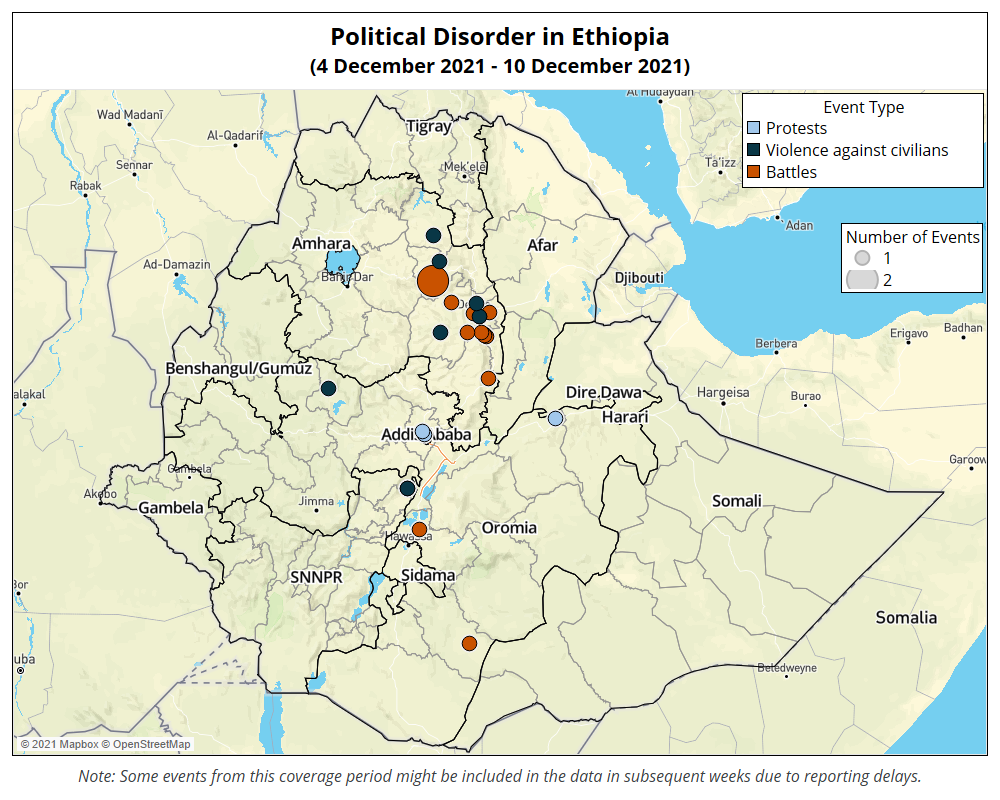 In the Oromia region, Oromia special police and militias clashed with OLF-Shane militants in West Arsi and Guji zones (Oromia Broadcasting Network, 8 December 2021). In the West Shewa zone, a number of ethnic Amhara civilians were displaced following attacks by the OLF-Shane militants in Jibat woreda. Serious violence has been ongoing in areas across western Oromia as Oromo and Amhara ethnic militias have clashed in areas of the disputed territory. OLF-Shane militants have been accused of instigating violence and attacking ethnic minorities in the Oromia region, which they often deny and instead blame on pro-government militias.

In Southern Nations, Nationalities and Peoples Region (SNNPR), on 8 December 2021, an unidentified armed individual opened fire in Inseno town in Misrak Meskan woreda in Guraghe zone and killed at least one person. The next day, two unidentified armed groups clashed in the area. At the time of writing, the reason for this clash is unknown. Two years ago, there was a border conflict between Misrak Meskan and Mareko woredas that was later resolved by elders and religious leaders (ESAT, 9 December 2021).

Meanwhile, in Addis Ababa, ethnic Tigrayans demonstrated against TPLF and demanded that the group surrender to the government. The protesters held signs including slogans such as: “The TPLF does not represent us. We are proud Ethiopians. Tigrayans are Ethiopians” (Oromia Broadcasting Network, 5 December 2021).

Last week, forces loyal to the federal government managed to regain control of ten towns including Dessie, Kombolcha, Hayk, and Wuchale towns in the Amhara region (FDRE Government Communication Service, 6 December 2021; FDRE Government Communication Service, 8 December 2021). Conflicting claims about the territorial changes were immediately made by both sides. While government forces claimed to have taken control of the areas through armed conflict, TPLF officials claimed that their forces had conducted a tactical retreat to the Tigray region (Debretsion Gebremichale, 5 December 2021). A number of armed clashes between TPLF forces and government forces were reported in areas surrounding Gashena and Lalibela during the week as the remaining pockets of TPLF fighters were cleared.

After government forces regained control of these areas, reports began to emerge detailing killings, rapes, and property destruction carried out by the TPLF. The exact figures of civilian fatalities and rapes are still unknown as communication lines have only recently been restored. However, it is clear that violence was widespread across a number of towns in the Amhara region. As the Ethiopian National Defence Force (ENDF) was advancing to take control of Kombolcha, members of the TPLF reportedly shot and killed 10 youth and then set them on fire at a compound of Turk company in Kombolcha town (ESAT, 8 December 2021). Similar violence targeting children, disabled persons, and elderly women has been reported. Last week, mass graves were discovered in Gashena, Antsonkiya Gemza, and Kombolcha (Amhara Media Corporation, 9 December 2021).

In addition, the degree of looting and destruction of private properties, governmental institutions, business centers, industries, banks, schools, universities, health centers, and hospitals in both Amhara and Afar regions while areas of the regions were under the control of the TPLF has come to light. Last week, the government reported that TPLF forces looted and damaged 10 food processing industries, 11 leather and textile industries, three metal industries, 11 Agro-processing industries, and 10 chemical industries in both Dessie and Kombolcha towns (ESAT, 7 December 2021; Amhara Media Corporation, 13 December 2021). Kombolcha town is the industrial hub of the Amhara region. In the Afar region, TPLF forces looted and damaged four industrial buildings (ESAT, 7 December 2021).

As of 27 November, 1,660 schools were verified as having been looted and damaged in five zones of the Amhara region by TPLF forces. Out of these 1,660 schools, 277 were completely destroyed while the rest were partially destroyed (Ethiopian Broadcasting Corporation, 27 November 2021). In the Afar region, 455 schools were confirmed looted and damaged by TPLF forces (Ethiopian Broadcasting Corporation, 27 November 2021).

These reports of looting, destruction, killing, and rapes have reinforced a position among many in Ethiopia that the TPLF forces’ main objective is to destroy towns and exact revenge. Media associated with the Amhara regional government reported that captured TPLF fighters admitted to receiving orders to commit looting, destruction, and rape in Afar and Amhara regions (Amhara Media Corporation, 19 November 2021).

This narrative of the TPLF’s violence and destruction is being used to mobilize and organize people both in conflict-affected areas, as well as across the country, to support the federal government. It has also solidified anti-western sentiment among those who feel that the United States and Europe have belittled Ethiopia by pressuring government leaders into negotiating with the TPLF. The TPLF was declared a terrorist organization by the House of Representatives of Ethiopia on 6 May 2021 (Africanews, 6 May 2021). To many, reports of looting, rape, and civilian killings justify the use of emergency measures like mass arrests and media crackdowns. These reports have likewise had a negative impact on other anti-government groups who associate with the TPLF, including those involved in the United Front of Ethiopian Federalist and Confederalist Forces (Reuters, 5 November 2021).

Narratives of destruction and abuses committed by members of TPLF forces have also created distrust towards ethnic Tigrayans who live across the country. A recently released report by the United Nations warned that a thousand people of mostly Tigrayan origin had been arrested in a single week under the State of Emergency (DW, 16 November 2021).

As reports continue to emerge detailing serious abuses by TPLF forces in both Amhara and Afar regions, it is clear that relationships between communities across northern Ethiopia have been shattered. Along with the damaged infrastructure, civil society groups that used to maintain peace between ethnicities have been polarized. Serious questions about justice and accountability as well as reconciliation will have to be addressed.