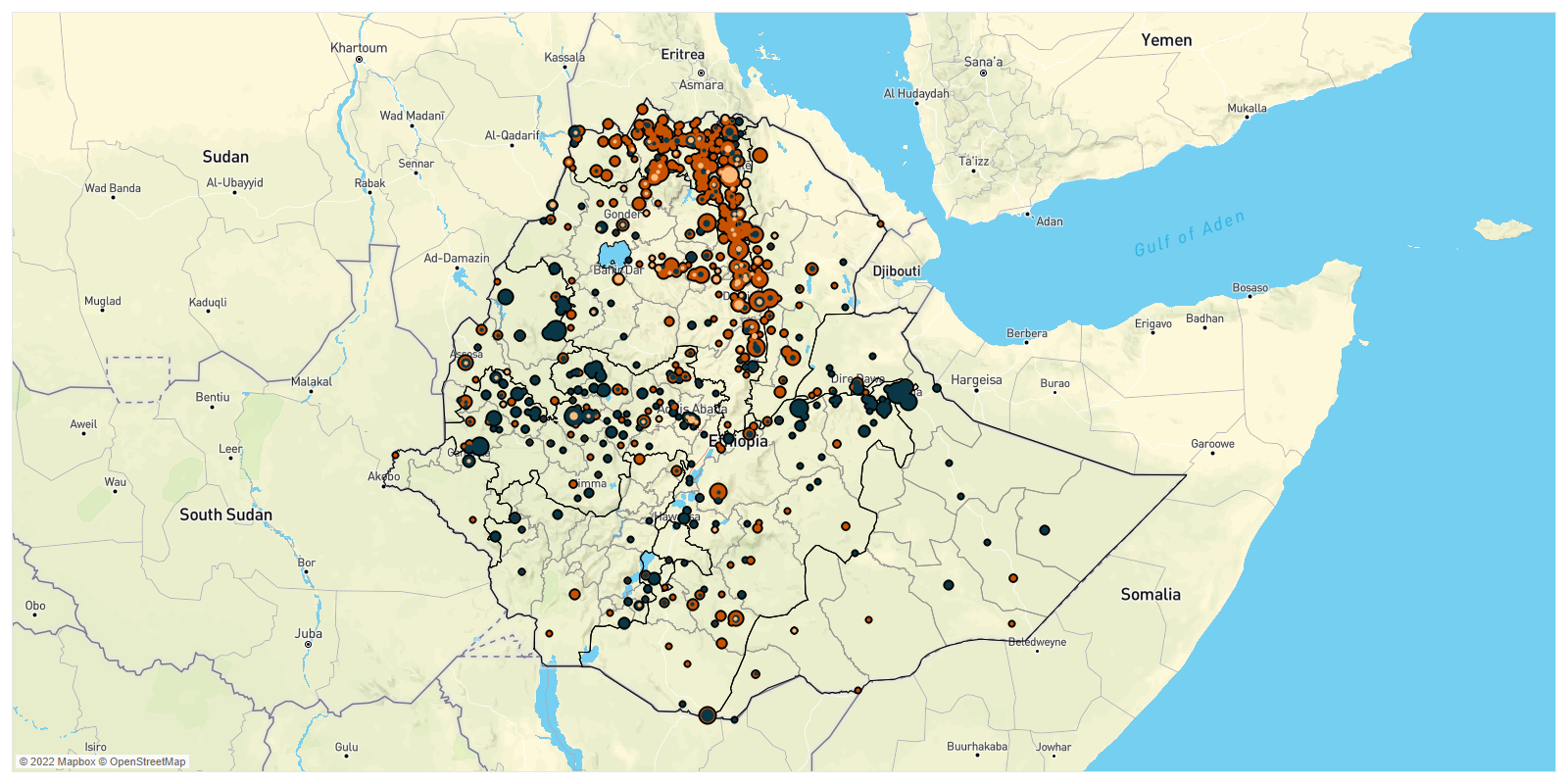 By the Numbers: Ethiopia, 11 December 2021 – 7 January 20222Some events from this coverage period might be included in the data in subsequent weeks due to reporting delays. 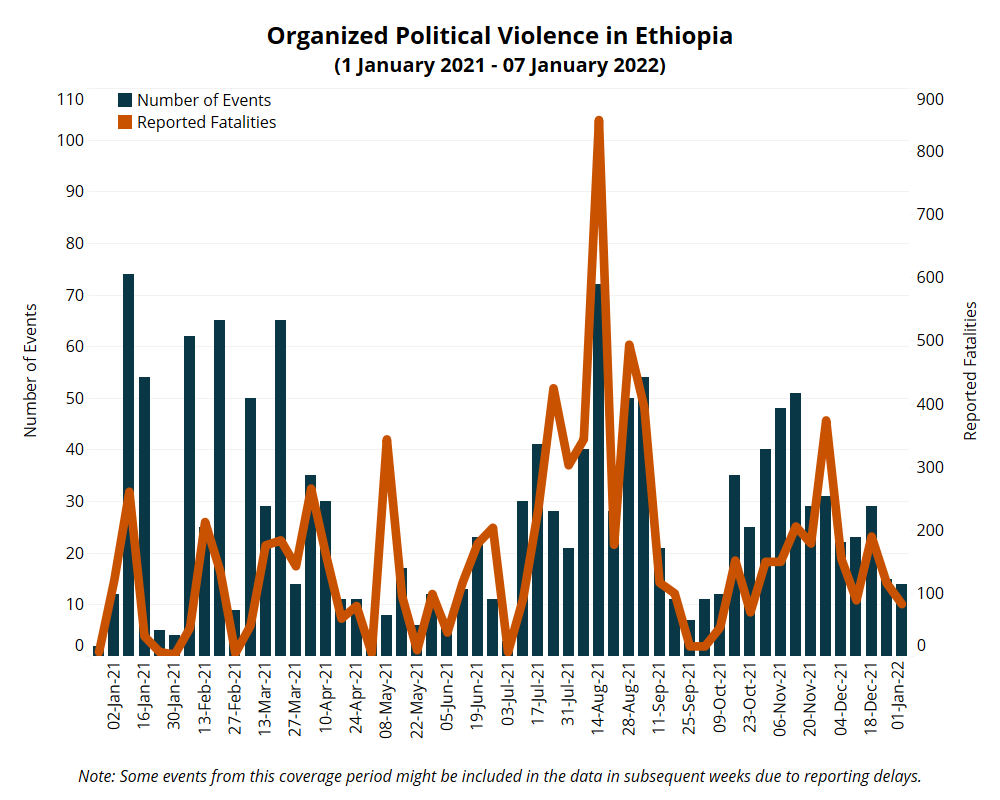 Over the past four weeks, as forces loyal to the Ethiopian government consolidated control over North Wello and Wag Hamra zones in the Amhara region, intense clashes were reported between federal troops and Tigray People’s Liberation Front (TPLF) forces in areas along the border between Afar and Tigray regions. Ongoing hostilities have delayed the arrival of humanitarian aid convoys to the Tigray region. Reports from Abala town, located on the Afar and Tigray regional border, indicated that armed clashes between TPLF forces and Afar militias began on 23 December and continued through 25 December (ESAT, 25 December 2021; DW Amharic, 27 December 2021). TPLF forces shelled Abala woreda in the Afar region on 25 December, killing an unknown number of people, including children (Afar Regional State Communication Affairs Office, 25 December 2021; DW Amharic, 27 December 2021). TPLF sources claim that 250 Tigrayan civilians were killed in Afar by the federal forces during the fighting and 900 people were internally displaced (VOA Amharic, 4 January 2022).

Meanwhile, the regional governments of both the Afar and the Amhara regions have since made efforts to return their respective areas to normalcy by reducing curfew hours and resuming government services (Ethiopian Broadcasting Corporation, 23 December 2021). Ethiopia’s federal government has similarly indicated that it intends to return the country to a state of normalcy. On 23 December, the government announced the end of the first round of military action against the TPLF and indicated it would no longer advance towards Mekelle, the capital city of the Tigray region (FDRE Government Communication Service, 23 December 2021).

Despite the government’s announcement, fatalities as a result of drone strikes by the Ethiopian government in the Tigray region have significantly increased over the past few weeks (see map below). On 16 December, a drone strike in the town of Alamata killed 38 people and wounded 86 more (Reuters, 7 January 2022). As well, according to a report released by the United Nations Office for the Coordination of Humanitarian Affairs (UNOCHA), airstrikes in the Tigray region between 19 and 24 December in the towns of Alamata, Korem, Maychew, Mekoni, and Milazat resulted in “dozens of people reportedly killed” (UNOCHA, 30 December 2021). A strike on 7 January hit a refugee camp in Mai Aini (near May Tsebri), killing three Eritrean refugees and wounding several others (Reuters, 7 January 2022). A day later, a strike on an internally displaced person camp in Dedebit just after midnight killed 56 people and wounded 30 more (VOA, 8 January 2022). Seventeen more people were killed in an airstrike that hit May Tsebri on 11 January (Reuters, 11 January 2022). 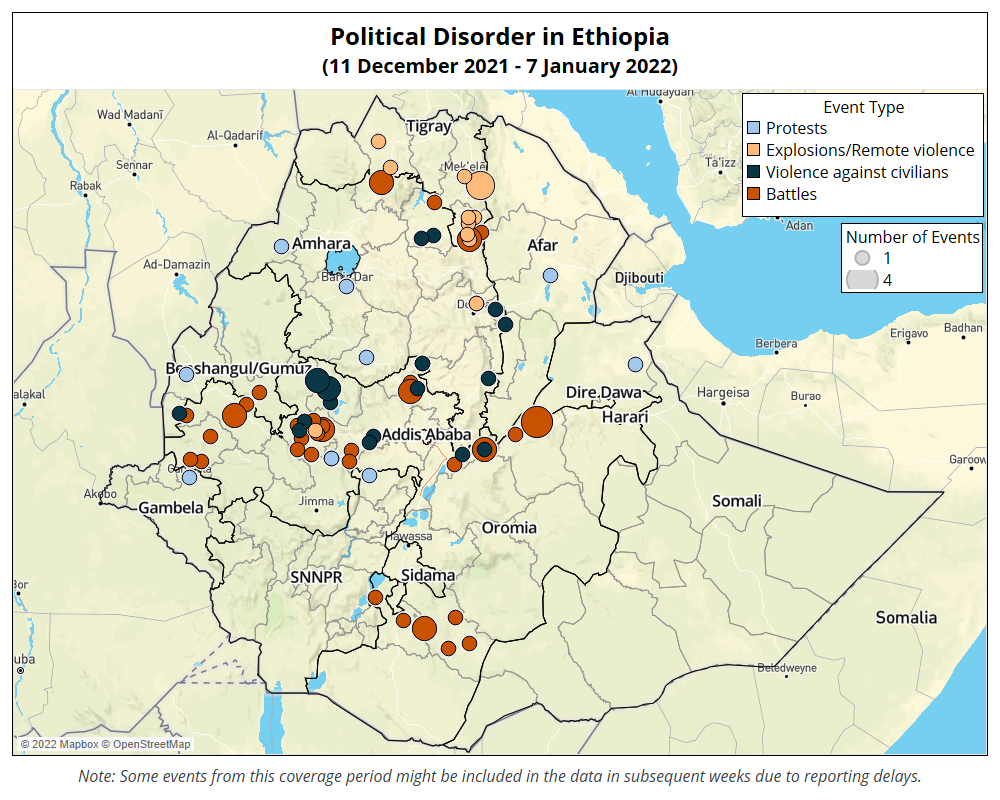 In Ethiopia’s capital, Addis Ababa, police have released a number of detainees who were arrested under the suspicion of having links with TPLF (Ethiopian Broadcasting Corporation, 6 January 2022). It is unclear how many detainees were released. Moreover, during the Ethiopian Christmas, the government released 33 prominent politicians, including top leaders of TPLF, for reasons related to “health and age” (Ethiopian Insider, 7 January 2022). According to the Ministry of Justice, the leaders of the Oromo Federalist Congress (OFC) and Balderas for True Democracy party were also released as part of a planned national reconciliation process (FDRE Ministry of Justice, 7 January 2022). On 29 December, the House of Representatives adopted the proclamation to establish an Ethiopian National Dialogue Commission.

Lastly, Oromo Liberation Front (OLF)-Shane activity spiked in mid-December and intensified in areas with previously limited activity. Recent conflict trends in the Oromia region will be examined in the weekly focus below.

Insurgent activity and the corresponding conflict in the Oromia region spiked in mid-December, leading to dozens of fatalities and hundreds of thousands of people being displaced (DW Amharic, 5 January 2022). Government forces have ramped up operations against OLF-Shane, while at the same time reports indicate that rural areas in parts of the Oromia region are increasingly under the control of the anti-government militants. A report issued by the government detailed recent (although no specific timeframe provided) operations that reportedly resulted in the death of 1,643 militants (EBC, 5 January 2022). Government spokespeople from Horo Gudoro Wellega and West Wellega zones have indicated that more than 195,000 people have been displaced as a result of conflict over the past few weeks (DW Amharic, 5 January 2022).

OLF-Shane has intensified its operations in areas with previously limited activity as well. Clashes between OLF-Shane and Oromia regional special forces were recently reported in Mieso (West Hararghe) in December 2021. This marked the first time prolonged clashes involving the group were reported in east Oromia, although sporadic clashes were reported previously (OLA Update, 7 January 2022). Government forces in Harar town reportedly arrested several OLF-Shane operatives in the area, including a commander (EBC, 7 January 2022). This increased activity in the area comes despite a pullback from areas of the Oromia special zone in the Amhara region, where OLF-Shane militants had joined forces with the TPLF. As federal troops regained ground in areas along the A2 highway in mid-December, control of these territories was transferred back to authorities from the Amhara region.

There are several factors that will influence the actions of the OLF-Shane in the coming months. First, the OLF-Shane’s alliance with the TPLF has proved to be a gamble that may have cost the group more than was originally considered. The alliance, besides being highly controversial among supporters of the OLF-Shane due to the TPLF’s extensive abuses in the Oromia region during their term in power, has not provided the military advantage OLF-Shane leaders may have calculated given the TPLF’s recent retreat from Amhara and Afar region. Second, the recent release of Jawar Mohammed and other members of the Oromo Federalist Congress (OFC) indicates that the government may seek to deprive the OLF-Shane of any popular support by cutting deals with politicians that hold political sway in conflict areas of the Oromia region. Finally, OLF-Shane military advances have come at a time when the federal government has been devoting all resources to the conflict in the north. Should some of these resources be reallocated to the Oromia region, fighters from the group will face much stiffer resistance throughout the region.