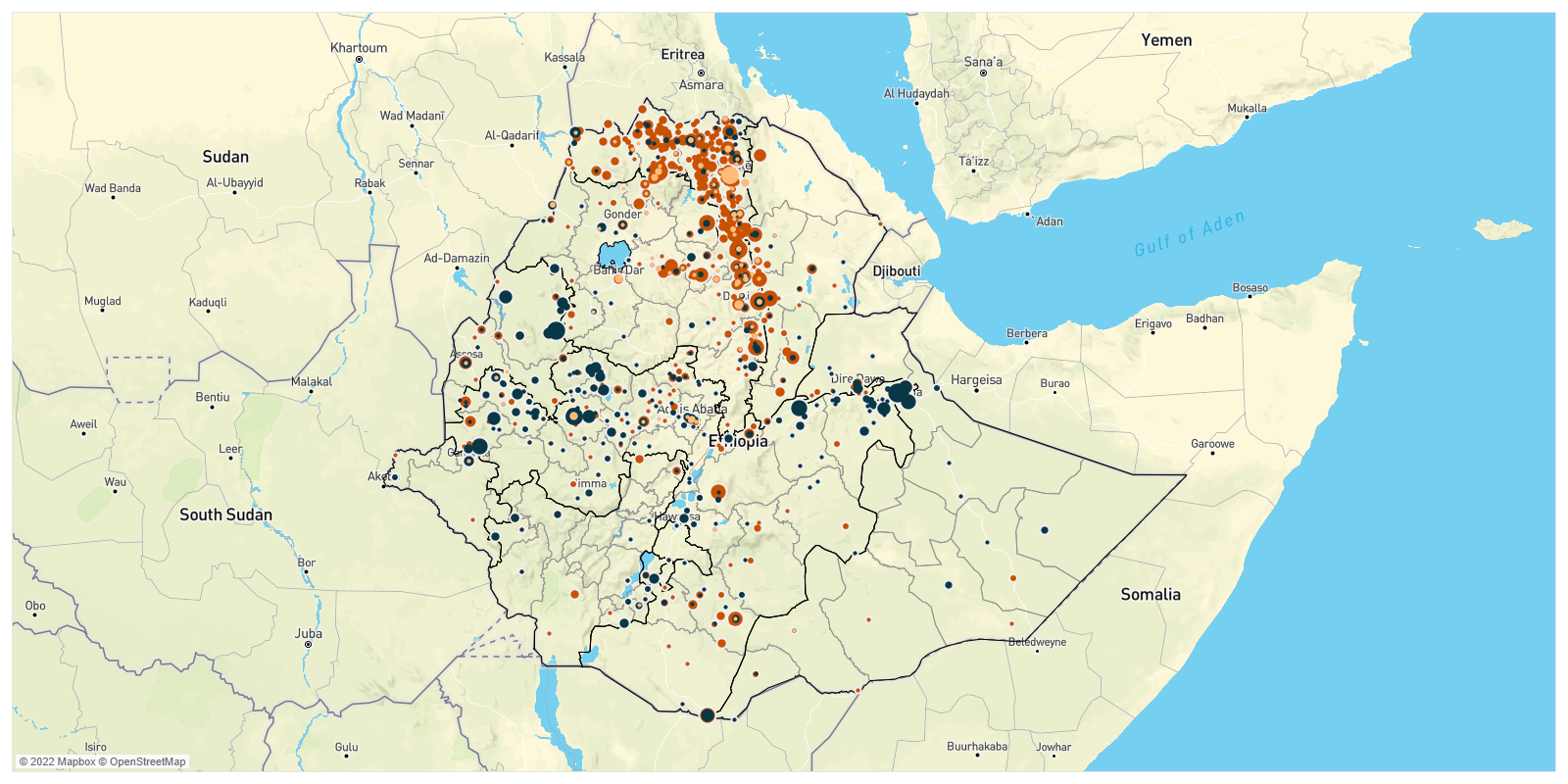 By the Numbers: Ethiopia, 15-21 January 20222Some events from this coverage period might be included in the data in subsequent weeks due to reporting delays.

Last week, Ethiopian government security forces and Oromo Liberation Front (OLF)-Shane continued to clash in the Oromia region (see map below). From 14 January to 17 January, a joint force of the Republican Guard, Oromia special police, and Oromo ethnic militias clashed with OLF-Shane rebels in Gidami woreda in the Kellem Wollega zone. Shortly after, government forces regained control of the area (OBN, 18 January 2022). On 19 January, members of OLF-Shane attacked a police station in Negele Borana town, killing one federal police officer and wounding three others. The next day, members of OLF-Shane shot and killed a Prosperity Party official as he traveled through Adola Redde district in the Guji zone.

Also in the Oromia region last week, hundreds of civilians were forced to flee their homes as Amhara ethnic militias attacked and killed an unknown number of civilians in Jardega in Jarte Jardega woreda. They also killed 15 civilians in Chidati village in Amuru woreda in the Horo Gudru zone (OMN, 22 January 2022).

In the Afar region, clashes continued in areas along the Afar/Tigray regional border. The Afar regional government claimed that on 15 and 16 January, the Tigray People’s Liberation Front (TPLF) shelled Abala and Magale areas in the Kelbeti Rasu zone in the Afar region, killing an unknown number of civilians (Afar Regional State Communication Affairs Office, 16 January 2022). Humanitarian convoys transiting to the Tigray region through Abala have not been able to move since 14 December 2021 due to ongoing clashes (UNOCHA, 20 January 2022).

There have also been clashes along the border of the Tigray and Amhara region in the North Gondar and Wag Hemra zones, resulting in the displacement of several thousand people (UNOCHA, 20 January 2022). Although 31 out of 32 camps for internally displaced people in the Amhara region have closed, and most internally displaced people have returned home, there is still an immense need among those who have returned home and face a lack of food and basic necessities (DW Amharic, 17 January 2022). According to the Amhara regional government, two million hectares of farmlands were not cultivated in the region due to the conflict (DW Amharic, 19 January 2022).

Last week, the Christian holiday of Epiphany was celebrated in Ethiopia. During celebrations in Burayu town in Oromia special zone, Oromia region, Oromia police blocked a number of Orthodox Tewahedo Christians – who were wearing the Ethiopian flag without the national emblem at the center – from entering the town. Worshipers were escorting the Tabot (a religiously sacred representation of the Ark of the Covenant) from Addis Ababa to Burayu town. Clashes ensued and Oromia police opened fire with tear gas and live rounds, killing at least three civilians and wounding several others (DW Amharic, 21 January 2022). The incident highlights dramatic political divisions at play in Ethiopia’s complicated civil society, even in locations that are far from conflict zones.

The official flag of Ethiopia, as established by the TPLF led transitional government in 1994, consists of green at the top, yellow in the middle, red at the bottom, and has a national emblem at the center. Flags without the national emblem are often associated with Ethiopia’s Orthodox church and, more recently, with pan-Ethiopianism. The flag without the emblem is often seen being carried by Amhara regional special forces and Fano militias engaged in conflicts in Ethiopia’s north (BBC News, 3 January 2021). To some, the flag without the emblem is a source of national pride and unity that transcends Ethiopia’s many divisions. To supporters of Oromo ethno-nationalist politicians, Ethiopian unity and its associated flag are viewed as symbols of political repression and intolerance for Oromo self-governance.

Ethiopia is at a crossroads. Many of its national symbols have been the subject of hotly contested debate over the past year. Muslim worshipers celebrating Iftar in May 2021 were violently dispersed by security forces from Meskel Square, located at the center of Addis Ababa, after “unidentified bodies in the government structure [requested] to change the venue of the event” (Addis Standard, 10 May 2021). The Ethiopian Orthodox Tewahedo Church has been accused of wanting sole control over the use of public spaces like Meskel Square in cities across Ethiopia.

The federal government has said little regarding the aforementioned incident in Burayu and government-associated media have not commented on the incident. The government’s communications office, as well as the Mayor Office of Addis Ababa, mentioned that there were “some entities that wanted to disturb the Epiphany celebrations” but failed to detail the cause of the dispute (FDRE Government Communication Service, 21 January 2022; Mayor Office of Addis Ababa, 22 January 2022).

Burayu and other areas surrounding the capital are areas that will be especially vulnerable to increased ethnic tensions in coming months. Administered by the Oromia region, but inhabited by many migrants from across the country, the town was the site of intense ethnic violence in 2018 after clashes erupted following the return of the Oromo Liberation Front (OLF) from Eritrea (Al Jazeera, 17 September 2021).

The prevention of violent events like those in Burayu last week is difficult and requires deep and inclusive dialogue about the future of the country. The violence that occurred in Burayu over the design of the Ethiopian flag and its uses represents the deep political divisions that exist in the country today.