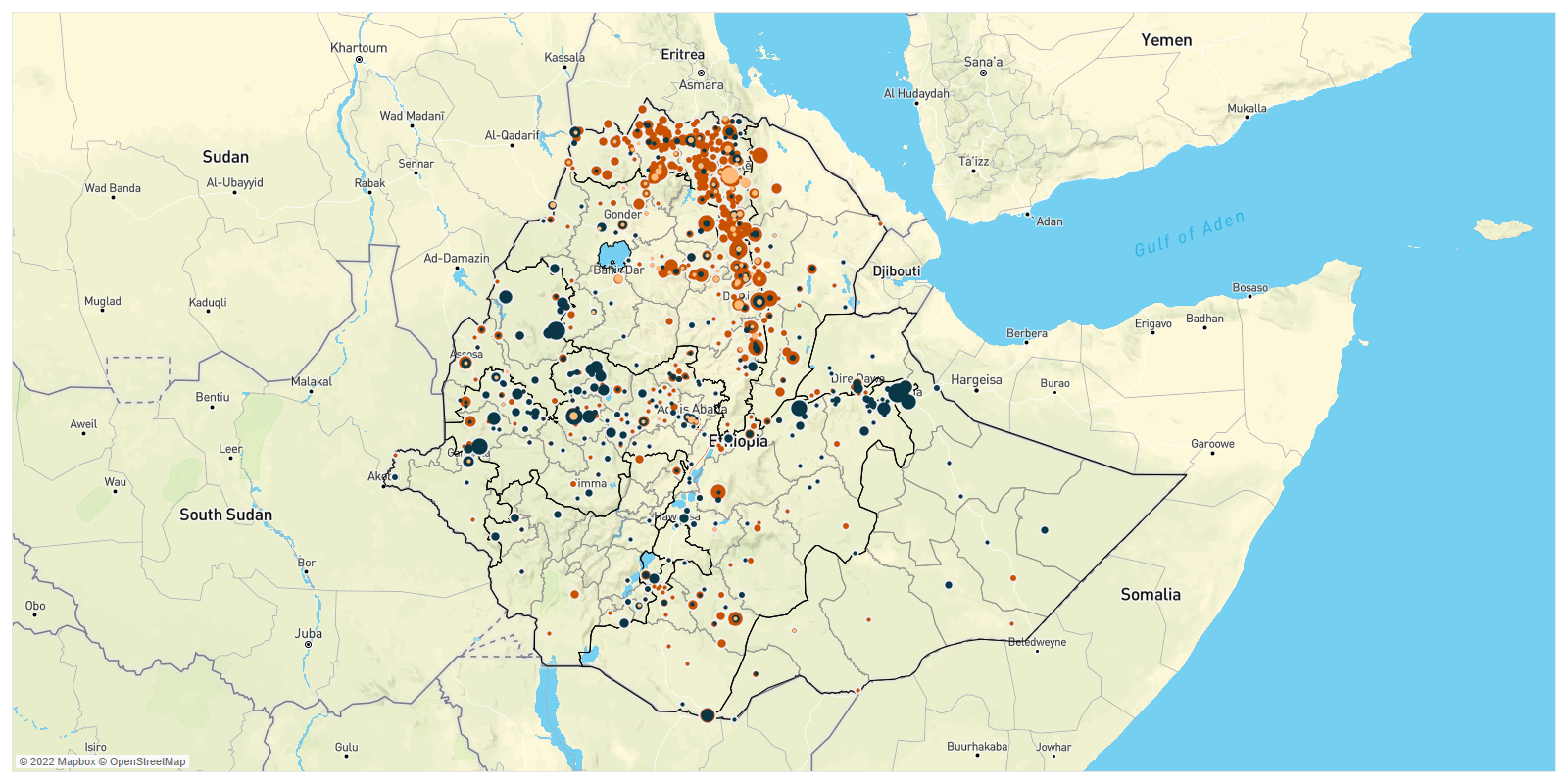 By the Numbers: Ethiopia, 29 January – 4 February 2022 2Some events from this coverage period might be included in the data in subsequent weeks due to reporting delays. 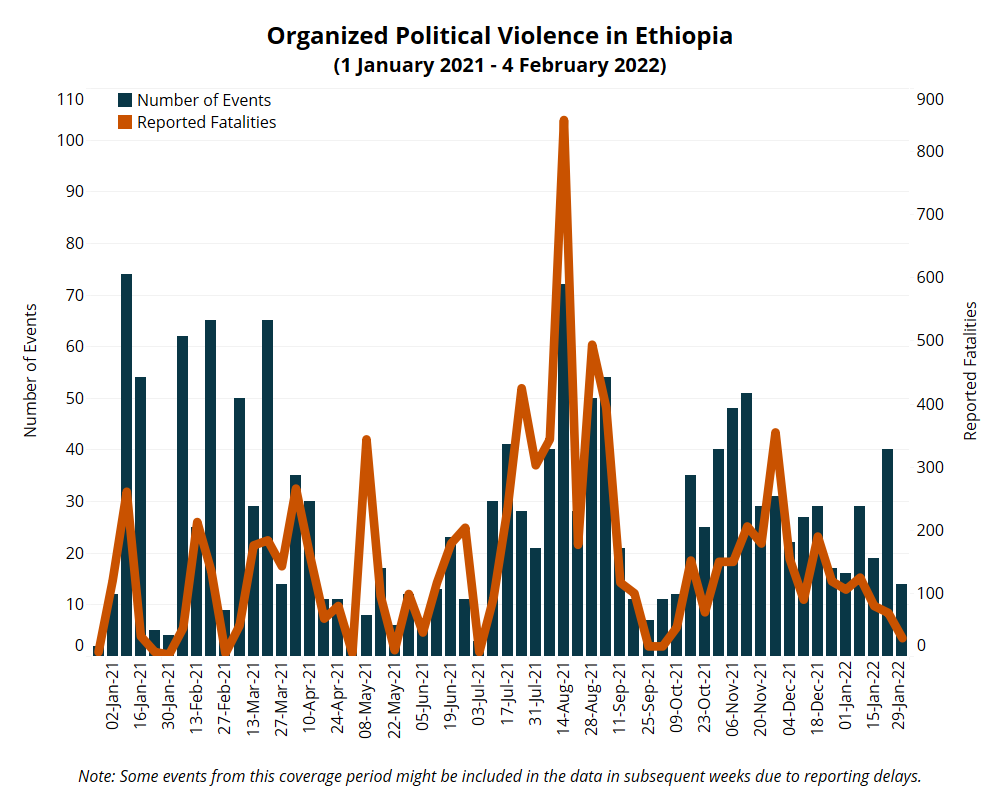 Clashes continued throughout the past week in the Afar region as the Tigray People’s Liberation Front (TPLF) forces fought against Afar regional special forces and local militias in Abala town on the Tigray/Afar regional border. Clashes spread to Berhale, Magala, Kunneba, and Erebti areas of Kilbati Rasu-Zone 2 as TPLF forces moved toward the east (see map below). Residents of these areas reported heavy fighting between the warring parties, using heavy artillery and small arms (DW Amharic, 31 January 2022). 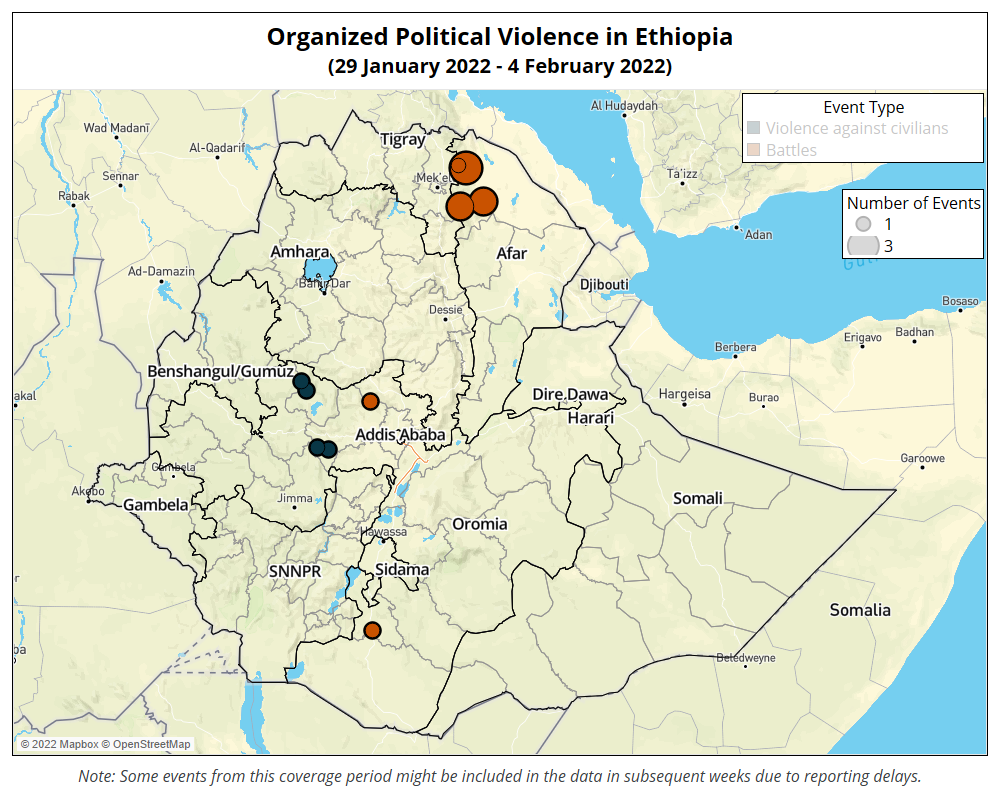 Last week, residents in Hayu town in Eliadar woreda and Semera Logiya in the Afar region protested against TPLF attacks in Kilbati Rasu-Zone 2 (Amhara Media Corporation, 30 January 2022; ESAT, 31 January 2022). In addition, a group of Afar diaspora held a demonstration denouncing the TPLF attacks in Kilbati Rasu-Zone 2 in front of the European Commission headquarters in Brussels, Belgium (DW Amharic, 2 February 2022). The protesters also condemned the federal government’s silence regarding the armed clashes in the zone.

In the Gambela region, regional officials, including the regional president, traveled to Juba, South Sudan on 2 February 2022 to discuss issues related to cross-border attacks on residents in the region by Murle militias (VOA Amharic, 2 February 2022). Attacks earlier in the month led to at least eight fatalities, as well as kidnappings and cattle rustling (DW Amharic, 21 January 2022).

Ongoing hostilities in northern Ethiopia, the Oromia region, as well as drought throughout the South/East of the country have displaced thousands and are stretching government resources. In the Tigray region, TPLF authorities have been unable to provide basic services for months, and huge swaths of the population are at risk.

According to the Afar regional authorities, more than 300,000 people are internally displaced due to recently renewed armed clashes between TPLF and the Afar regional special forces and militias in Kilbati Rasu-Zone 2 in the Afar region (DW Amharic, 7 February 2022; DW Amharic, 31 February 2022;). Renewed conflict on the Semera-Abala route in Abala town and Southern Tigray has rendered the delivery of aid by trucks impossible, and no humanitarian assistance has been delivered since 15 December 2021 (UNOCHA, 3 February 2022; VOA Amharic, 24 January 2022). Humanitarian convoys used to travel through the Semera-Abala main road to deliver humanitarian supplies to the Tigray region. As mentioned, since violence has escalated in Kilbati Rasu-Zone 2 since 24 January 2022, humanitarian convoys are unable to travel through the Semera-Abala route. Nevertheless, between 26 January and 4 February, the International Committee of the Red Cross (ICRC) organized several humanitarian flights and delivered “vital medical supplies” like “insulin, hemodialysis, oxytocin, tetanus toxoid, gloves, and surgical material” to the Tigray region (ICRC, 4 February 2022; ICRC, 26 January 2022).

In addition to the clashes in the Afar region, members of the Raya ethnic group residing in Waja, Temuga, and Alamata areas in the Southern Tigray zone have been internally displaced due to recent TPLF forces attacks in these areas. These internally displaced people (IDPs) are asking for humanitarian assistance (Amhara Media Corporation, 24 January 2022). Most of these IDPs are located in Kobo in the North Wello zone in the Amhara region. According to the administrator of Waja and Tumuga kebele, more than 12,000 people have recently taken refuge in Kobo town (VOA Amharic, 27 January 2022). Even though many IDPs, who were displaced during the earlier phase of the conflict in the Amhara region, have returned to their homes, the need for humanitarian assistance is high due to the destruction of livelihoods, infrastructure, and farmland (DW Amharic, 1 February 2022).

These crises are stretching the government’s resources and its ability to assist the populations affected by conflict and drought. Both national and international stakeholders are making huge efforts to provide humanitarian assistance to these populations. However, gaps in resources have left many in the country impoverished. Armed conflict throughout the country has led to the disruption of thousands of lives and placed hundreds of thousands in need, a trend that is expected to continue as clashes are ongoing.