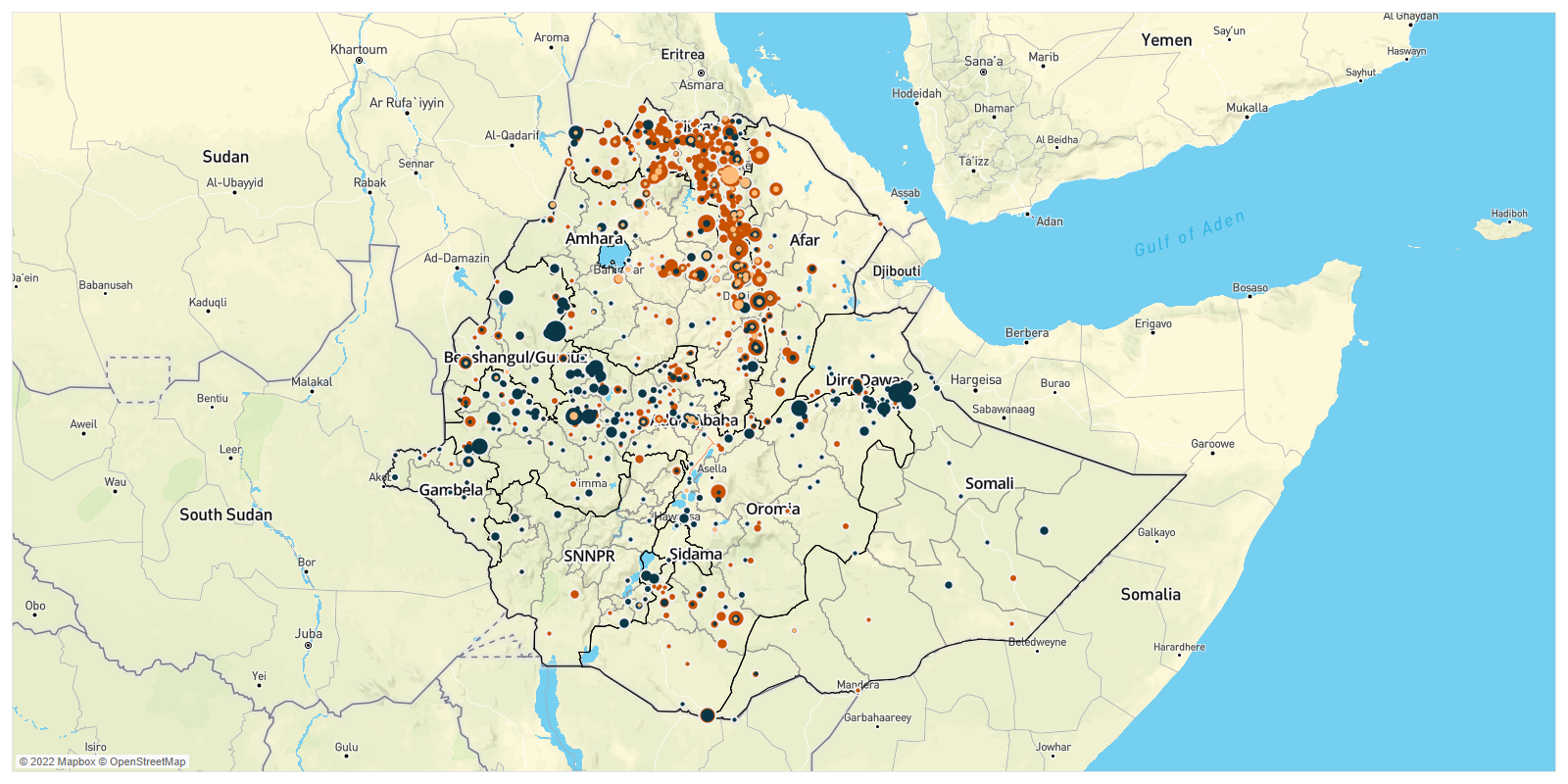 By the Numbers: Ethiopia, 19-25 March 2022 2Some events from this coverage period might be included in the data in subsequent weeks due to reporting delays. 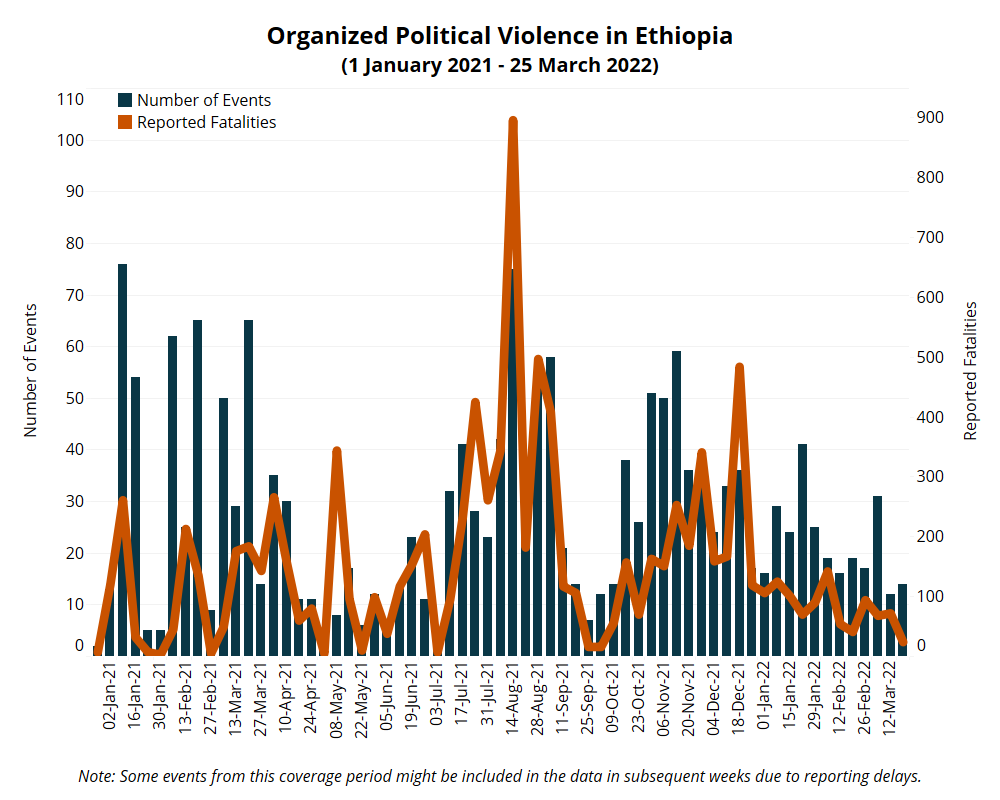 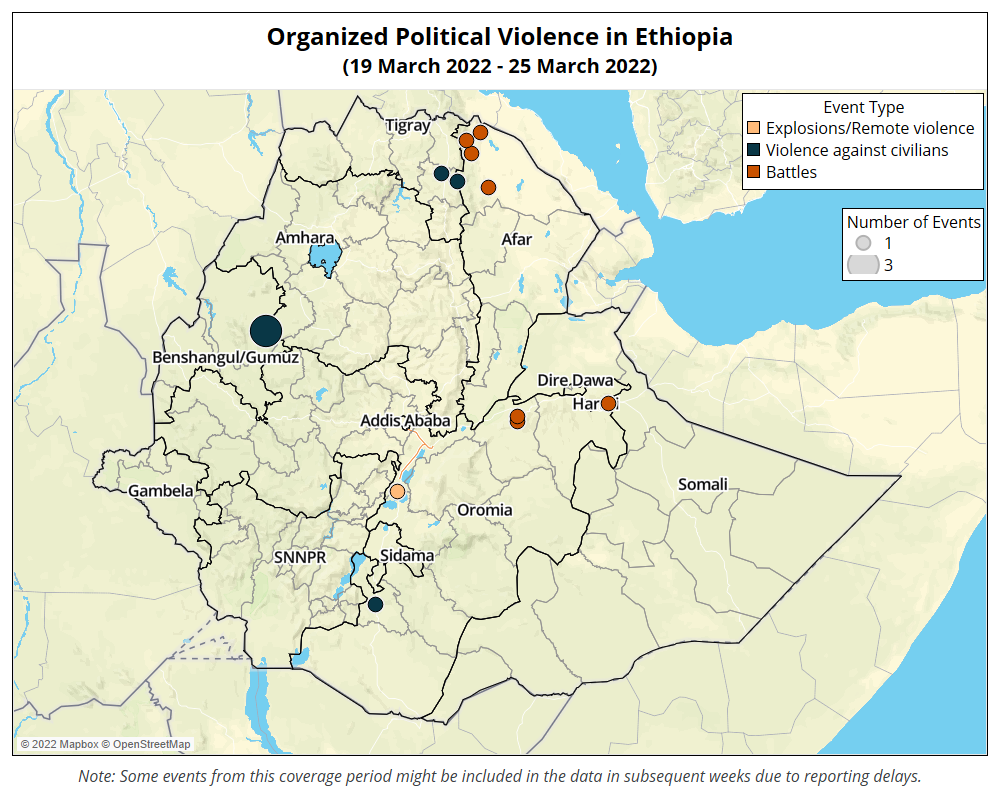 Last week, TPLF forces reportedly killed an unidentified number of women, including 16 to 18-year-old girls, and a man in Mekele city in Tigray region. The victims were imprisoned by the group after being accused of feeding members of the Ethiopian National Defense Force (ENDF) and supporting the ruling Prosperity Party.

In Oromia region, armed clashes between government security forces and the Oromo Liberation Front (OLF)-Shane continued last week. Oromia regional special police and kebele militias clashed with OLF-Shane militants in Guyubo kebele in Gemechis woreda and Shenen Dungo in Chiro town, in West Hararge zone. Reportedly, three members of the OLF-Shane were killed, and three others were injured in the clashes. An additional three members of the armed group were also captured by security forces in Shenen Dungo.

Furthermore, on 24 March, an armed group, believed to be the OLF-Shane by the victim, attacked the residence of the Oromo Abbaa Gadaas (traditional elders) Association chairman and Abbaa Gadaa of Guji in Bule Hora in West Guji zone in Oromia region and looted goods. The OLF-Shane denied this accusation (BBC Amharic, 25 March 2022). On 19 March, three local militia members and a 12-year-old child died when a bomb exploded during the graduation ceremony of local militias in Bulbula town stadium in East Shewa zone. Thirty-five people were injured due to the blast. No group has claimed responsibility for the attack.

Last week, Somali regional special forces exchanged fire with the members of Somali ethnic militias during the inauguration ceremony of a local clan leader in Bombas town in Gursum woreda in Fafan zone. Clashes erupted when Somali regional special forces tried to stop the ceremony proceedings. Seven people were killed and more than 20 were injured.

Despite agreement by both warring parties, there are serious challenges to implementing a ceasefire in northern Ethiopia. Shortly prior to the declaration of the truce, the government accused TPLF forces of shooting at 23 vehicles carrying humanitarian aid as they attempted to pass through the “Abala and Mekele corridor” on the way to Mekele (ESAT, 23 March 2022). On 28 March, the Tigray regional government accused the Ethiopian federal government of blocking aid deliveries, despite the declared truce (Getachew Reda, 28 March 2022). The federal government retorted that it was the TPLF that was blocking the routes (FDRE Government Communication Service, 29 March 2022). As reported by humanitarian officials, armed clashes between TPLF and Afar regional special forces and associated militias continued throughout the week in numerous woredas in Kilbati Rasu-Zone 2 in Afar region (UNOCHA, 25 March 2022).

Renewed conflict on the Semera-Abala route in Abala town in Afar region over the past few months has rendered the delivery of aid by trucks nearly impossible, and no humanitarian assistance by road has been delivered since 15 December 2021 (UNOCHA, 3 February 2022). This has left civilians in the region in a desperate situation, and thousands have fled into neighboring regions as well as Sudan seeking food and shelter. The Ethiopian government has demanded that TPLF forces withdraw from Afar and Amhara regions to facilitate the delivery of humanitarian aid (FDRE Government Communication Service, 29 March 2022).

There are other complications facing the implementation of the ceasefire. According to reports by local sources, the ENDF has not been engaged in fighting in Afar region since TPLF forces began an advance into Kilbati Rasu-Zone 2 in January 2022. In most battles since the beginning of the year, government forces have limited their engagement to conducting artillery and airstrikes in support of Afar regional forces, including irregular militias and forces loyal to the Afar regional government, who have shouldered the bulk of the fighting. This has led to a sense of betrayal and anger among many in Afar region, and implementing a ceasefire while TPLF forces remain on “Afar territory” is going to be very difficult. The Ministry of Foreign Affairs Spokesperson, Dina Mufti, highlighted these difficulties, explaining that Afar forces are currently unwilling to allow aid to pass through Afar into Tigray region while TPLF forces control several woredas in the region (Ethiopia Insider, 24 March 2022). Thus, even if the federal government is not engaging directly with TPLF forces during a declared “truce,” fighting is unlikely to stop due to the federal government’s lack of strong control mechanisms over the regular and irregular militias that are on the front line.

Similar dynamics exist in Amhara region where TPLF forces remain entrenched in North Gondar and Wag Hamra zones. Clashes sparked by the federal or Amhara regional government’s attempt to disarm irregular Fano militias in Amhara region exemplify the weakness of the federal government in battlefront areas. At the beginning of March 2022, Fano militia members clashed with Amhara regional special forces in Mota, Yejube, Biwegn, and Gindewoin towns in East Gojam zone following the arrest of a Fano leader by government forces after he refused to stop training Fano members (Wazema Radio, 7 March 2022). Irregular militias, in both Afar and Amhara regions, pose a major threat to the humanitarian ceasefire declaration given their existence outside of the federal government’s official security structures and their territorial ambitions.

Despite high hopes for a lasting cessation of hostilities, complications regarding territory and irregular militias outside of the government’s control make a lasting peace unlikely. Given these complicating factors, conflict is likely to resume unless additional steps are taken. Additional steps would include indications that both parties are willing to engage in dialogue over contested territory, the withdrawal of armed forces from disputed territories, and the allowance of aid across all conflict lines.