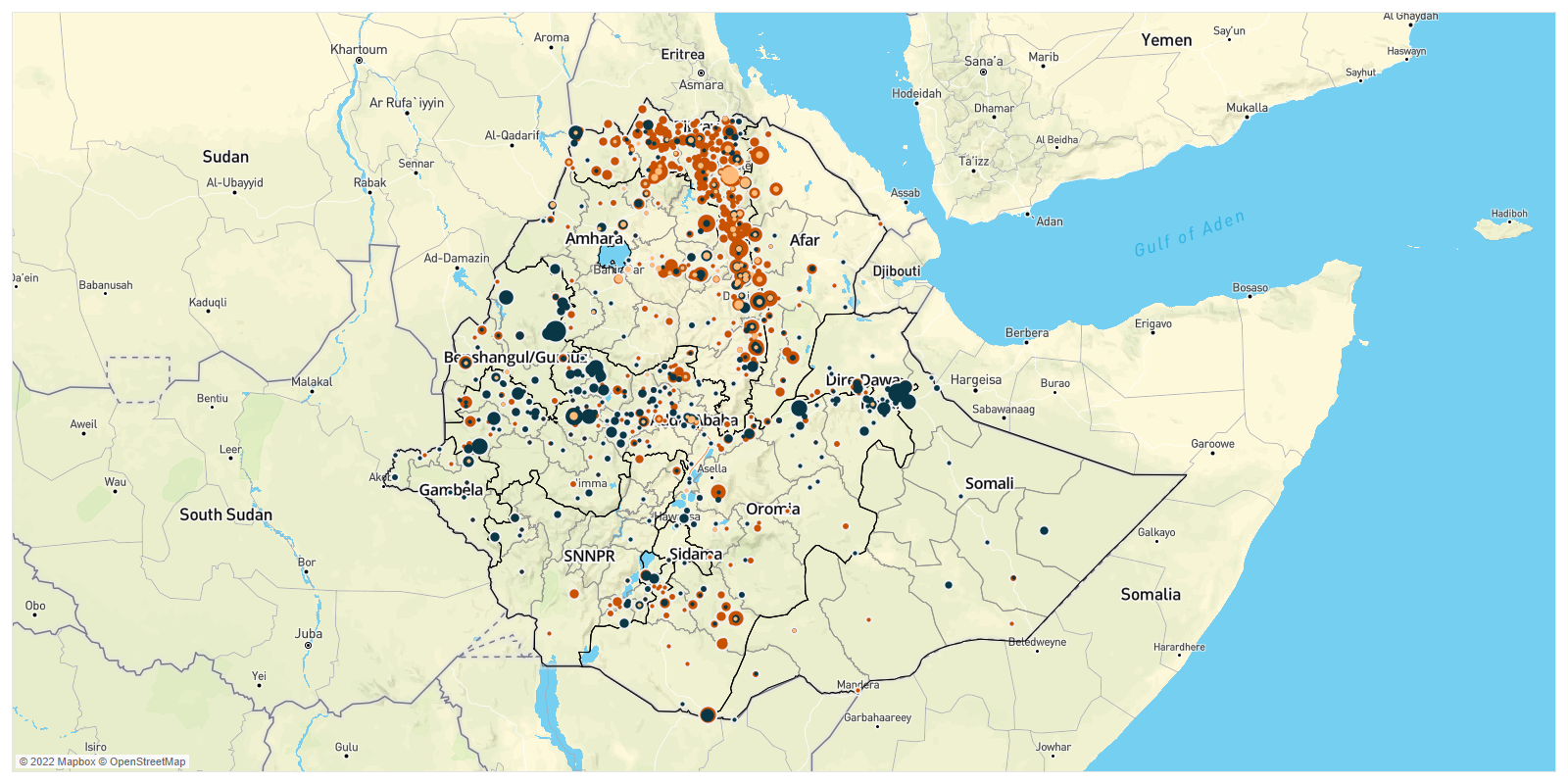 By the Numbers: Ethiopia, 7-13 May 2022 2Some events from this coverage period might be included in the data in subsequent weeks due to reporting delays. 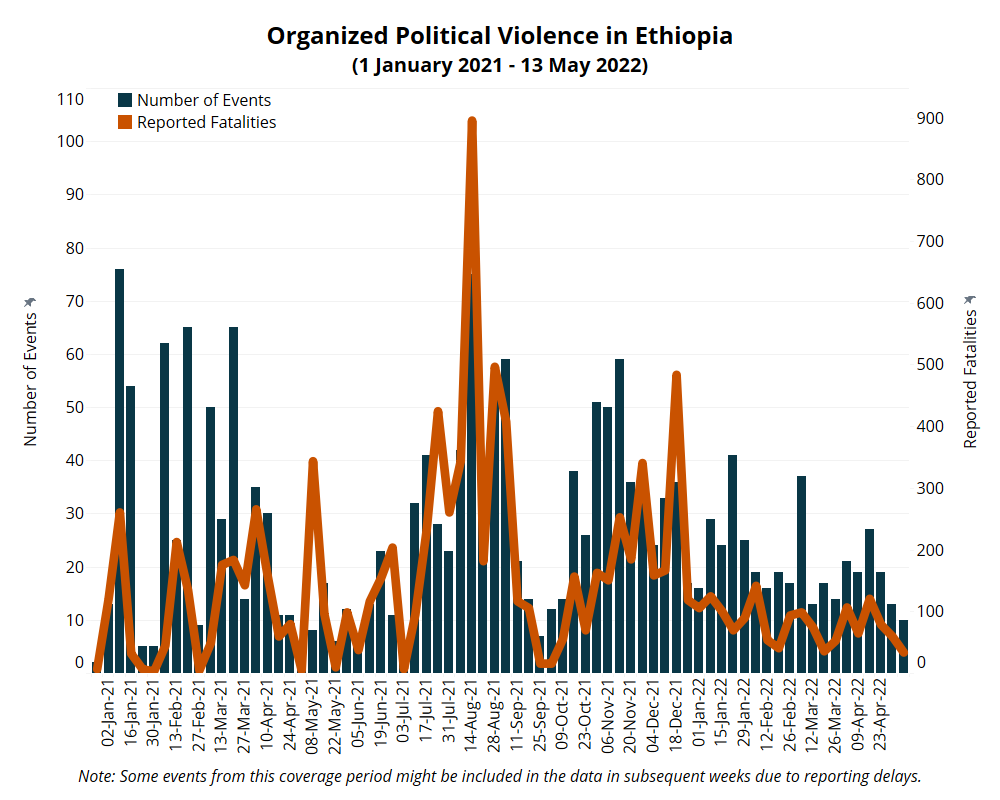 Last week, in Southern Nations, Nationalities and Peoples Region (SNNPR), violence continued throughout the week in Konso zone and Derashe special woreda. On 9 May, federal forces from the Ethiopian National Defense Force (ENDF), federal police, and SNNP regional special forces exchanged gunfire with Derashe ethnic militias in Hataya and Selele rural villages, near Gedole town. An unknown number of people were reportedly killed during the clashes. Later, on 11 and 12 May, unidentified gunmen attacked civilians in the Becho area of Gumayde town in Segen woreda in Konso zone, killing at least one person. Violence in SNNPR during the last week is a continuation of heavy fighting that started in late April this year (for more details, see the EPO Weekly: 23 April-6 May 2022).

In Tigray region, Tigray People’s Liberation Front (TPLF) forces fired artillery shells at Eritrean military targets in Badme and Rama border area. Armed clashes were later reported between Eritrean and TPLF forces in the Rama area. Soldiers from the Eritrean Defense Force have been in control of Badme town since the outset of conflict in northern Ethiopia in November of 2020. Eritrea’s alliance with the government of Ethiopia against the TPLF has been a point of tension, with the international human rights community accusing Eritrean troops of serious abuses against the Tigrayan population in Tigray region (Human Rights Watch, 5 March 2021). In the 2018 peace deal initiated by Prime Minister Abiy Ahmed, Ethiopia returned the control of Badme town to Eritrea based on the ruling of the Eritrea-Ethiopia Boundary Commission in 2002 (Al Jazeera, 9 July 2019).

In Oromia region, government-associated media reported that protests were held against the Oromo Liberation Front (OLF)-Shane in Kuyu woreda in North Shewa zone and in Nekemte in East Wollega zone (Oromia Communication Bureau, 13 May 2022; Oromia Communication Bureau, 9 May 2022). Meanwhile, OLF-Shane militants clashed with the ENDF in Adaba woreda in West Arsi zone, Sagli kebele in West Hararge zone, and Gumi Idalo woreda in Guji zone (see the map below). Along with ongoing clashes, several events involving violence against civilians were also recorded. On 10 May, ENDF and Oromia regional special forces reportedly killed eight people and injured another in Galan Wedesa in Ambo Zuria woreda in West Shewa zone after accusing them of supporting the OLF-Shane. A day later, ENDF forces shot and killed three other civilians in Midagdu kebele in West Hararge zone allegedly for the same reason. ENDF and Oromia regional special forces also shelled and destroyed an unknown number of civilian houses in Leman and Kare Kora villages in North Shewa zone last week. In a statement released on 12 May, the Oromo Federalist Congress claimed that 297 civilians were killed by government forces in the past few months alone (Ethiopia Insider, 12 May 2022). 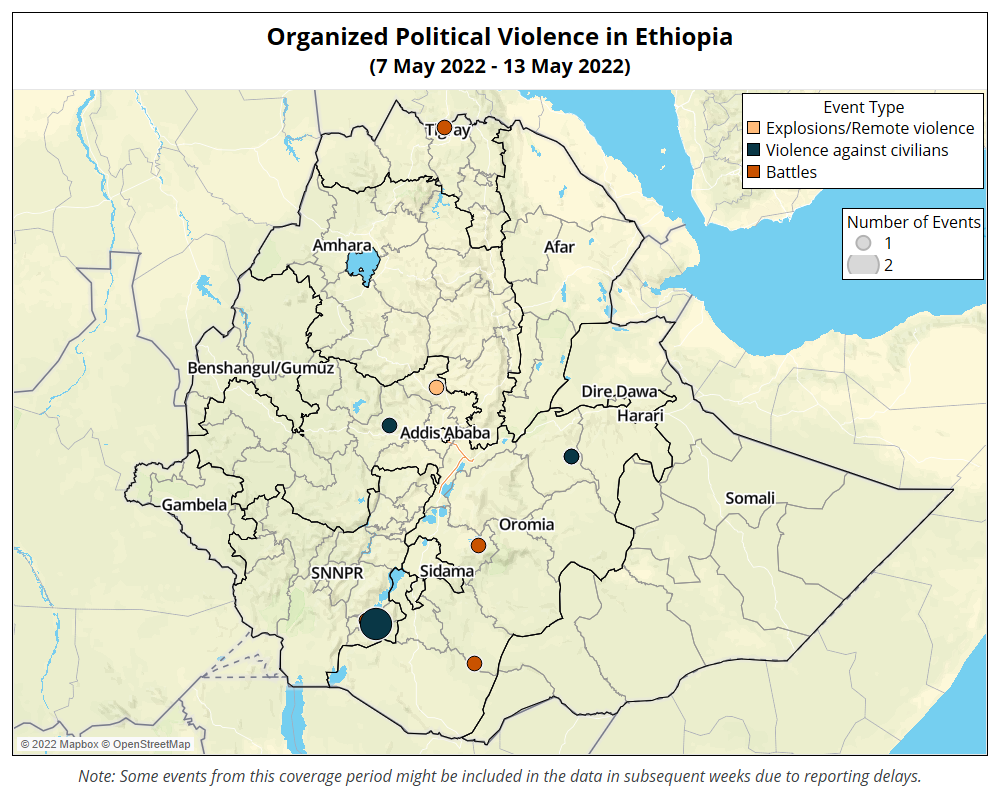 For many in Ethiopia, the upcoming national dialogue represents a hopeful opportunity to end a long and difficult period in Ethiopian politics. Violence and instability over the past two years have affected a large part of the population. Inflation and broken supply chains have made food and fuel in short supply. Displacement, uncertainty, and an increase in funds collected by the government from various sources in society to support the war effort have all contributed to a difficult environment for civilians throughout the country.

Last week, the chairperson of the Ethiopian National Dialogue Commission (ENDC) announced that the national dialogue, which aims to resolve Ethiopia’s current political woes, will begin in November 2022 (Amhara Media Corporation, 14 May 2022). Its initiation has not been smooth – many political institutions have denounced its initial committee selection process as unfair and exclusive. Nevertheless, it is an opportunity to attempt to mend deepening divisions throughout the country.

At the beginning of this month, the Commission took over the responsibilities of the Administrative Boundary and Identity Issues Commission and the Reconciliation Commission – both established at the end of 2018 (Fana Broadcasting Corporate, 3 May 2022). Commissioners of these two Commissions were renowned people, religious leaders, and leaders of opposition parties (Borkena, 5 February 2019; Borkena, 5 February 2019). The main purpose of the Administrative Boundary and Identity Issues Commission was to resolve disputes over internal boundaries and identity-related disputes (Proclamation No. 1101 /2019). On the other hand, the Reconciliation Commission was established “to maintain peace, justice, national unity and consensus and also Reconciliation among Ethiopian Peoples” (Proclamation No.1102 /2018, Article 5). Due to several reasons, including the imprisonment of several of their members, ongoing conflict, and inability to reach a consensus, these commissioners failed to achieve their objectives and their roles were shifted to the ENDC.

The Commission is still at its initial stages. Hence, it is difficult to assess its activities in detail. However, most opposition parties have voiced their objection against the Commission since its inception. The Ethiopian Political Parties Joint Council – a coalition of more than 50 registered political parties in Ethiopia – issued a statement and requested the House of Peoples’ Representatives to halt the selection process of the commissioners, claiming the process lacked inclusiveness and trust. The Joint Council said that the names of all 632 candidates should have been made public to ensure trustworthiness, and expressed concern that there is no clear indication whether the selection of the 42 candidates has been done as per the listed prerequisites in the proclamation (Ethiopian Political Parties Joint Council, 17 February 2022). The Council also opposed the adoption of the proclamation without holding a second consultation on the draft. Nevertheless, on 6 May, after long deliberation, 40 members of the Ethiopian Political Parties Joint Council voted to participate in the upcoming national dialogue (ESAT, 6 May 2022).

Other major opposition parties also released similar statements. The Balderas for Genuine Democracy Party called the Commission “failure before its formation” due to the selection process of the commissioners (Balderas, 21 February 2022). The Ethiopian Citizens for Social Justice (EZEMA) has also expressed its opposition to the way the proclamation was adopted and the nomination process of the commissioners, calling for the shortcomings to be addressed (EZEMA, 23 February 2022). The Oromo Federalist Congress (OFC), Oromo Liberation Front (OLF), and Ogaden National Liberation Front (ONLF) issued statements saying “the process of the nomination of Commissioners to lead it is not impartial (OFC), [is] unknown (OLF) and lacked representation (ONLF)” (Addis Standard, 4 February 2022).

The ENDC is facing a daunting challenge. For the national dialogue to be successful, all stakeholders in the country must participate in the dialogue. Yet, it is not clear whether the TPLF and OLF-Shane will be included in the national dialogue due to their status as designated “terrorist” organizations by the House of Peoples’ Representatives in May 2021. Nevertheless, the chairperson of the Commission stated that “there is no restriction on the proclamation” which established the ENDC, and indicated that the national dialogue will be inclusive of all stakeholders (Gebeyanu, 12 March 2022). For now, it is unclear how this will be accomplished without at least a negotiated ceasefire between the government and TPLF. Even though there is a humanitarian truce since the end of March 2022, various sources indicate that another round of war might reignite in the north in the coming few months (DW Amharic, 16 May 2022; Amhara Media Corporation, 13 May 2022).

Different patterns of political conflict are observed in Ethiopia. These patterns are: (1) the northern conflict between the federal government and TPLF; (2) armed conflict between OLF-Shane and government forces; (3) identity-based attacks by different armed groups; and (4) self-administration related conflicts (see EPO Weekly: 23 April-6 May 2022 for more details on the Trajectory of Conflict in Ethiopia). The national dialogue might be more successful in resolving identity-based and self-administration related conflicts if the Commission manages to involve all stakeholders and follow the implementation of agreed outcomes of the national dialogue without any delays. One of the causes of violent conflict over identity and self-administration is the lack of prompt response to such demands by the government. Bringing sustainable peace through national dialogue in the northern conflict might take a long time as most issues are complicated and intertwined with political decisions. The same is true for the conflict with the OLF-Shane. The commissioners’ term of office is three years with a possibility of extension by the House of Peoples’ Representatives. The ENDC is expected to “develop a political culture that can solve internal problems that have been simmering for centuries through dialogues and create a conducive environment for the building of a democratic system” (Proclamation No. 1265/2014, Article 6(5)).