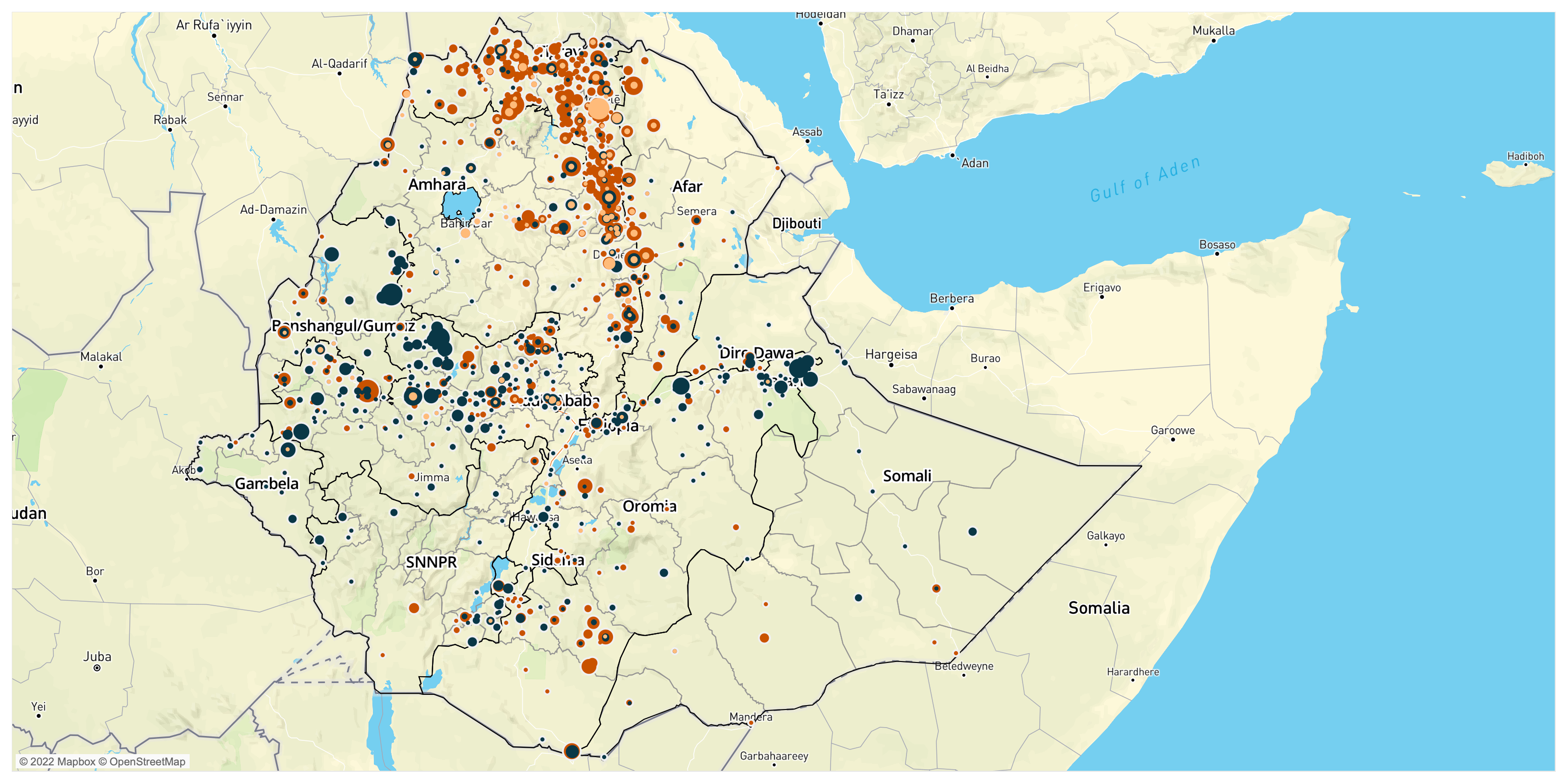 By the Numbers: Ethiopia, 29 October-4 November 20222Some events from this coverage period might be included in the data in subsequent weeks due to reporting delays. 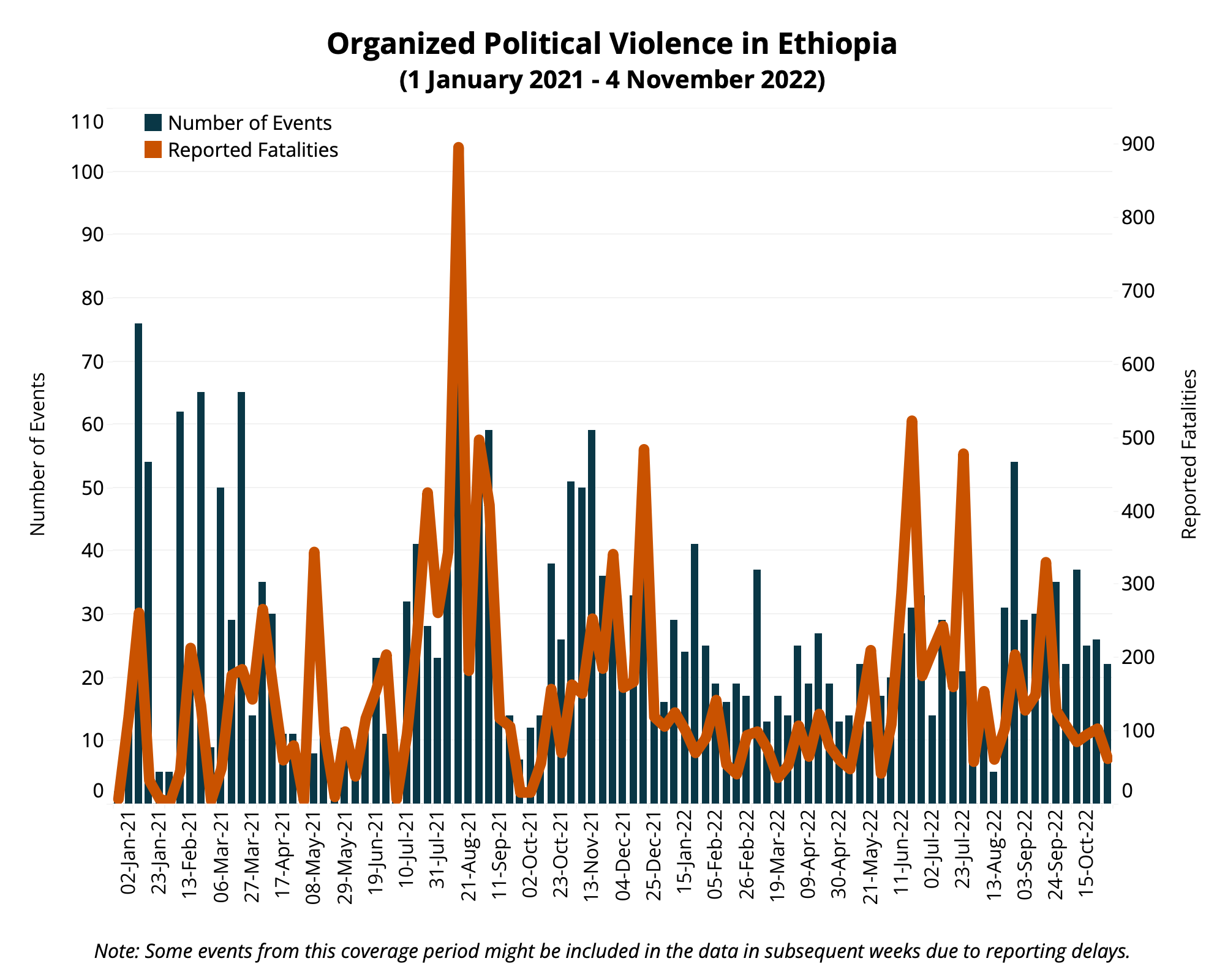 Last week, on 2 November, the Ethiopian government and the Tigray People’s Liberation Front (TPLF) signed the Agreement for Lasting Peace through Permanent Cessation of Hostilities in Pretoria, South Africa after 10 days of negotiations. The agreement consists of 15 articles. Among other things, the two parties agreed to permanently cease hostility, disarm TPLF forces, restore the federal government authority in the region, establish an “inclusive” interim transitional government until a regional election can be held, restore basic services, and expedite humanitarian aid in the region (The Ministry of Foreign Affairs of Ethiopia, 4 November 2022). To begin its implementation as per Article 6 (d) of the agreement, the Chief of General Staff of the Ethiopian National Defense Force (ENDF), Field Marshal Birhanu Jula, and the Commander-in-Chief of TPLF forces, also known as the Tigray Defense Forces (TDF), General Tadesse Werede talked over the phone on 4 November, and met in person on 7 November in Nairobi, Kenya (VOA, 7 November 2022; EMS, 4 November 2022).

No political violence events were recorded in northern Ethiopia last week. Most Ethiopians and the international community welcomed the peace agreement, while some diaspora Tigrayans expressed concern over the disarmament of TPLF forces and questioned why Eritrea was not mentioned by name in the agreement (see for example UN News, 2 November 2022; Financial Times, 3 November 2022; Russian Embassy in Ethiopia, 3 November 2022; Ministry of Foreign Affairs of Japan, 4 November 2022; Republic of Türkiye Ministry of Foreign Affairs, 2 November 2022). Similarly, Amhara nationalists also opposed the agreement, arguing that it would return the administration of areas like Welkait Tsegede and Raya, which have been governed since the start of the conflict by Amhara region, to Tigray region. However, on 3 November, Prime Minister Abiy Ahmed indicated that the two parties had agreed to resolve identity-related and territorial administration requests, like the administration of the Welkait Tsegede area, through “talks and the country’s law” (Facebook, Abiy Ahmed Ali, 3 November 2022). 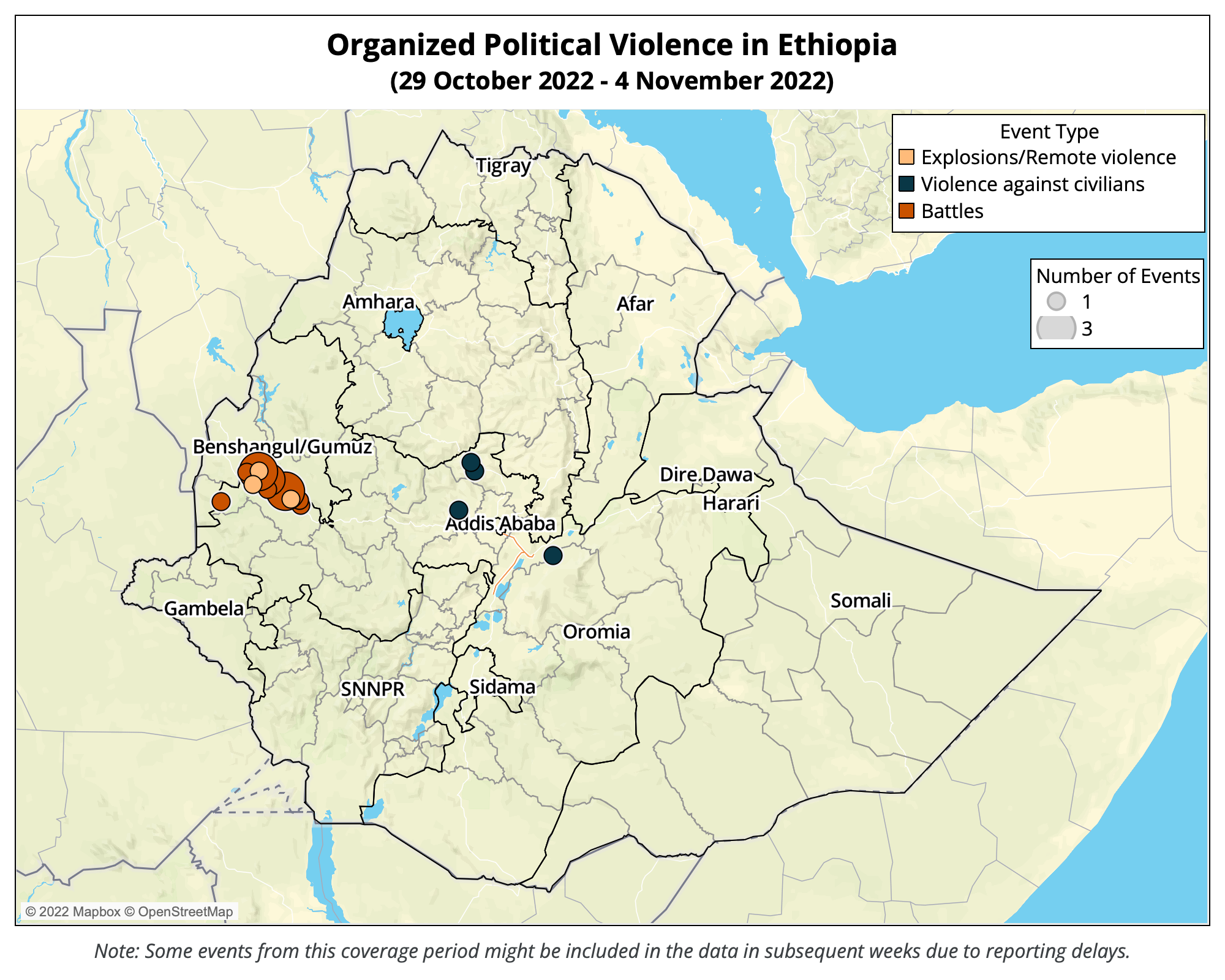 Elsewhere in Oromia region, four attacks on civilians were recorded last week. On 29 October, an unidentified armed group killed one deacon and kidnapped 11 other ministers after entering Midre Genet St. Lideta Mary Orthodox Church in Gebre Guracha town in Kuyu woreda in North Shewa zone. Two days later, an unidentified armed group opened fire on civilians and reportedly killed four people in Huruta Dore kebele in Jeju woreda in Arsi zone. The reasons behind these attacks are unknown. The remaining two attacks on civilians were perpetrated by Oromia regional special forces who reportedly killed one person and injured another in Tulu Milki in Wara Jarso woreda in North Shewa zone, and killed another person in Seriti kebele in Jeldu woreda in West Shewa zone. The victims were accused of having links with the OLF-Shane.

Lastly, in Benshangul/Gumuz region, the administration of Bambais woreda announced a nighttime curfew in Bambasi woreda in Asosa zone following an armed clash between OLF-Shane and government forces – federal police and Oromia regional special forces – in neighboring Benguwa area in West Wollega zone in Oromia region. The administration stated that it had credible information that the OLF-Shane was planning to launch a similar attack in the woreda (Ethiopian Reporter, 2 November 2022).