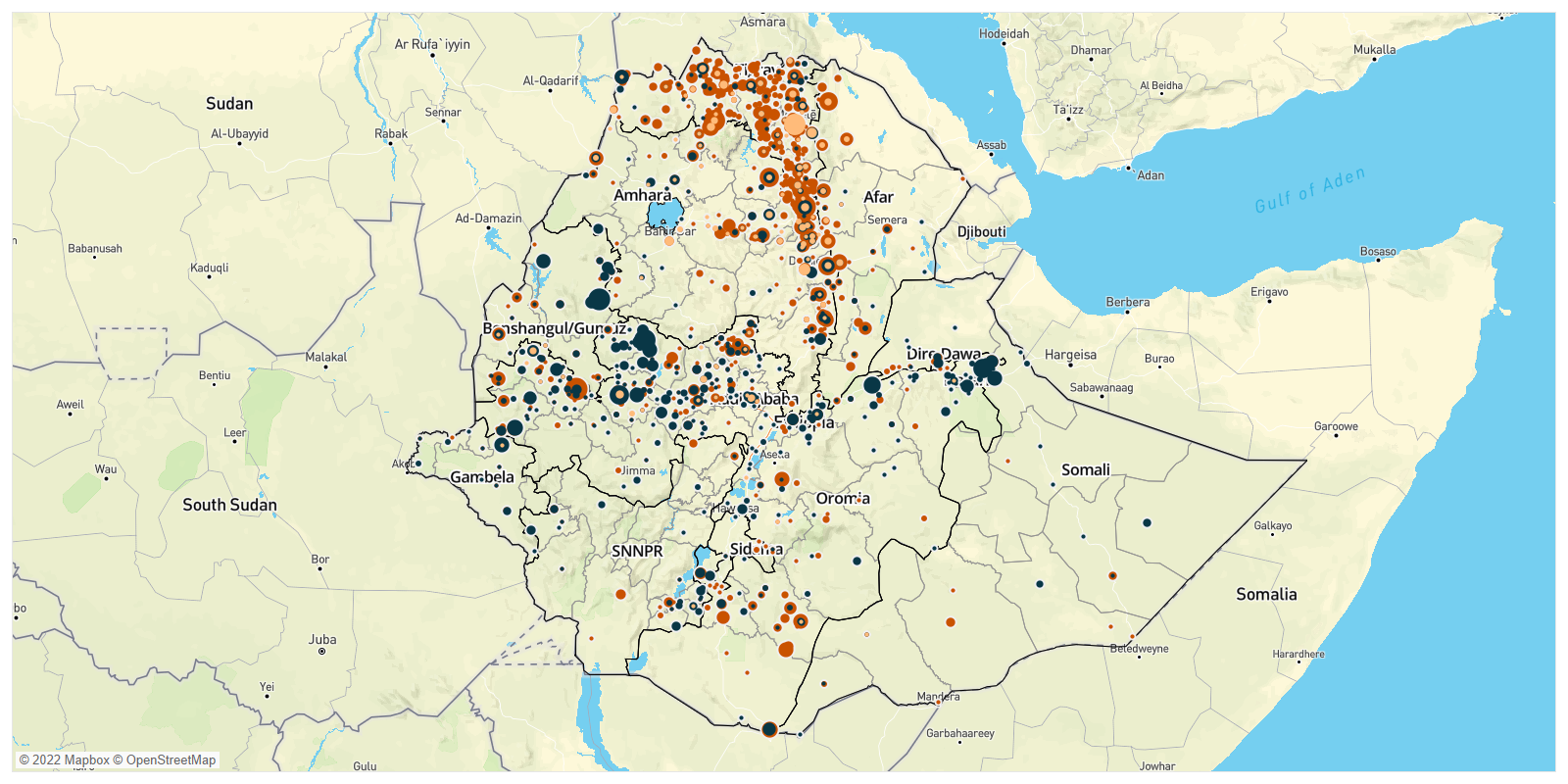 By the Numbers: Ethiopia, 12-18 November 20222Some events from this coverage period might be included in the data in subsequent weeks due to reporting delays. 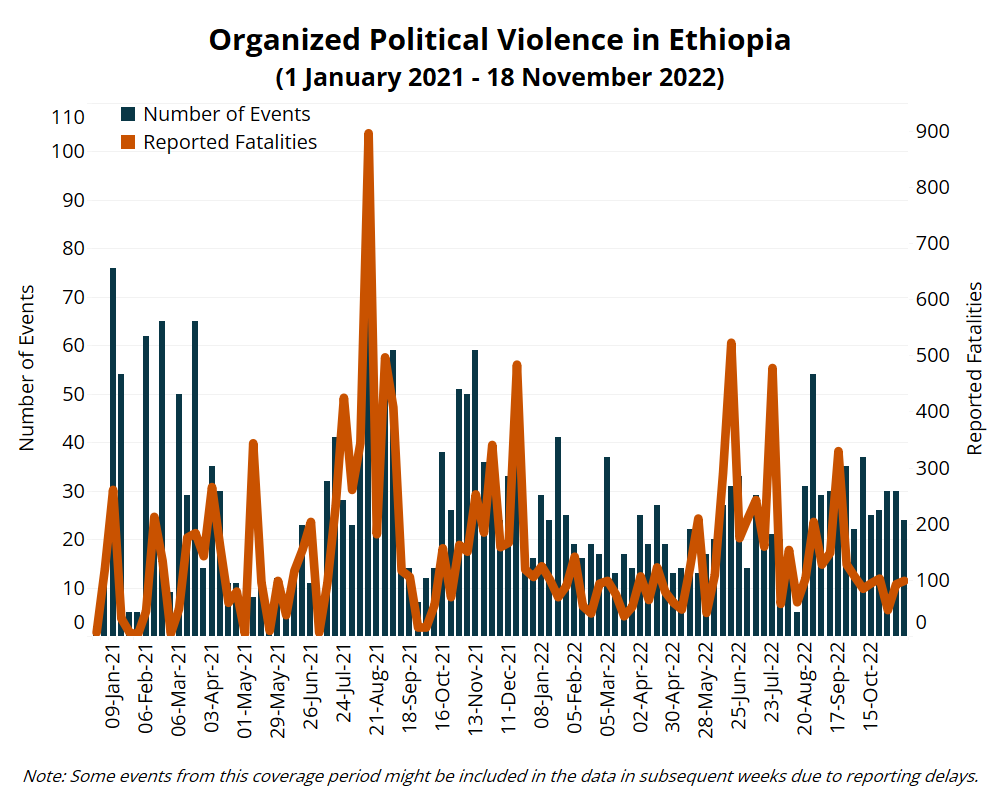 After six days of discussion, the heads of the Ethiopian National Defense Force (ENDF) and Tigray People’s Liberation Front (TPLF) forces – also known as the Tigray Defense Forces (TDF) – signed the Declaration of the Senior Commanders on the Modalities for the Implementation of the Agreement for Lasting Peace Through a Permanent Cessation of Hostilities on 12 November in Nairobi, Kenya. In this declaration, among other specifics, parties agreed on a roadmap and timeline for the implementation of a peace deal signed in South Africa earlier this month. In addition to a disarmament, demobilization, and reintegration process, agreements were also made regarding the formation of a monitoring and verification team by the African Union (AU). As per the declaration, starting from 15 to 21 November 2022, orientation will be provided for the armed forces of both parties. Within four days of the orientation, the TDF will disengage in four selected areas. While Eritrea was not mentioned by name in the agreement, article 2 (D) specifies that disarmament of heavy weapons will be done simultaneously “with the withdrawal of foreign and non-ENDF forces” from Tigray region (The Ministry of Foreign Affairs of Ethiopia, 12 November 2022).

There are some concerns with the peace agreement signed in South Africa. The TPLF Central Committee and the Tigray regional government released multiple statements requesting corrections to the agreement (Tigray TV, 12 November 2022; Tigray TV, 13 November 2022). All requested corrections asked to clarify the position of the negotiation team as representatives of the “Tigray government” and not the TPLF. This is a controversial request, as the TPLF was elected as the regional government of Tigray through an election declared illegal by the federal government (Reuters, 11 September 2020).

In the requested corrections, officials stated that: first, the TPLF did not send any representatives to negotiate in South Africa; instead, they were sent by the “Tigray government.” Second, the statements aimed to clarify that the TPLF does not have any armed forces. According to these statements, the current Tigray forces were established to defend Tigray region. Third, they pointed out that the “Tigray government would only be dissolved by the Tigray people who elected it and would not be dissolved by a peace agreement.” The Spokesperson of the TPLF and the head of the TPLF delegation, Getachew Reda, also indicated that they had planned to negotiate as the representatives of the “Tigray government,” but both the AU and “others” were not willing to accept their request (BBC Amharic, 15 November 2022).

As a result of decreased violent activity along access routes, for the first time since June 2021, a World Food Programme convoy of 15 trucks was able to traverse the Gondar-Mai Tsebri route via Adi Arkay, reaching Tigray region on 16 November (UNOCHA, 17 November 2022). Six International Committee of the Red Cross (ICRC) trucks also arrived in Mekele on 20 November (ICRC Ethiopia, 21 November 2022). The Ethiopian government has been working rapidly to repair damaged infrastructure, and announced that the complete repair of the Gashena-Alamata electric line was completed last week (EBC, 21 November 2022).

Oromia region continues to be the most volatile region in the country. Last week, 11 battle events were recorded in the region. Out of these 11 events, 10 battle events were between government forces and the Oromo Liberation Front (OLF)-Shane. These incidents occurred in Gundo Meskel town and Dayi kebele in North Shewa zone, Dugda Dawa and Suro Berguda woredas in West Guji zone, Fentale woreda in East Shewa zone, Wama Hagalo woreda in East Wollega zone, Wedesa in West Shewa zone, and Begi woreda in West Wollega zone (see map below). Meanwhile, Amhara and Fano militias clashed with government security forces in Kiremu in East Wollega zone, reportedly killing at least 20 people, including members of government security forces. Additionally, the Ethiopian Air Force conducted two drone strikes targeting OLF-Shane positions in Dera woreda in North Shewa zone and Chobi town in West Shewa zone. Over 40 civilians were reported to have been killed due to these strikes. It was also reported that the OLF-Shane took control of several locations, including Gumi Eldalo, Liben, Gora Dodola, Wadera, Seba Bore, and Adola Rade woredas in Guji zone, Melka Soda woreda in West Guji zone, and Arero woreda in Borena zone. 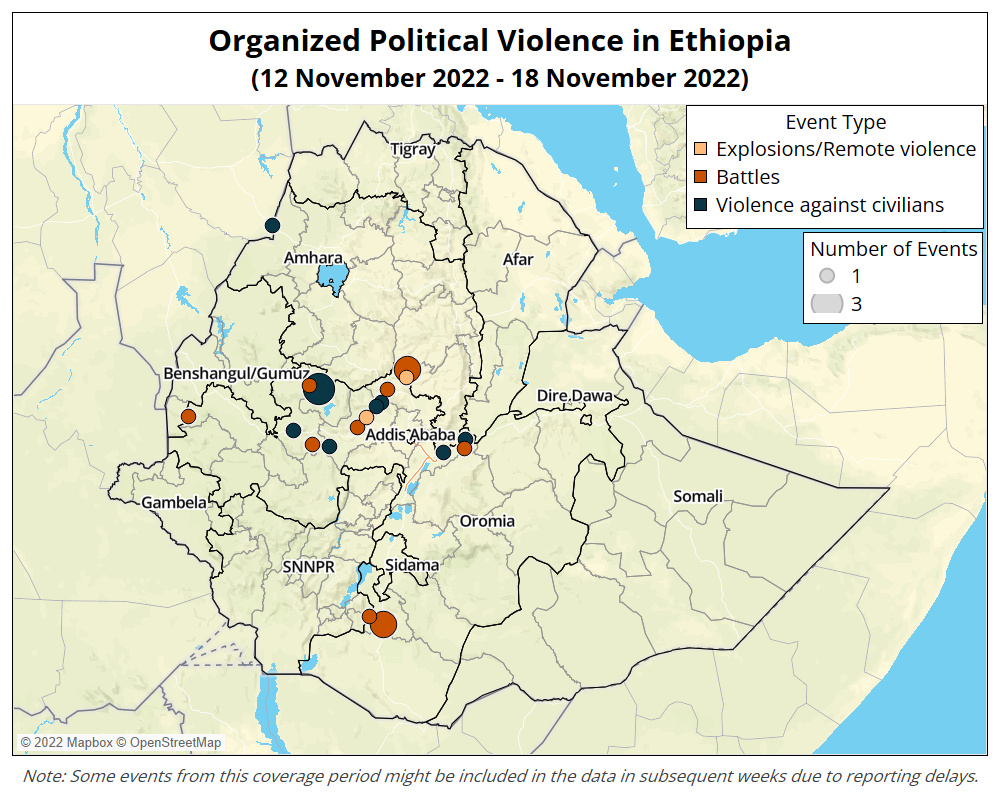 Furthermore, violence against civilians by different actors continued in the region. Last week, eight attack against civilian events were recorded in Oromia. Out of these eight attacks, three were conducted by government forces – Oromia regional special forces and the ENDF – in East Wollega and East Shewa zones. The OLF-Shane was involved in two attack against civilian events in North and West Shewa zones. From 15 to 17 November, Amhara and Fano militias shot and killed over 12 civilians in Alibo town in Horo Guduru Wollega zone.

In Amhara region, on 13 November, a Qemant armed group abducted 15 civilians after stopping a public bus in Metema in West Gondar zone. The bus was traveling from Shenfa to Gende Weha.

Lastly, on 18 November, youths burned tires and closed the main road in Welkite town in Gurage zone in Southern Nations, Nationalities and Peoples region to demonstrate against the recently proposed ‘cluster-based administrative structure’ by the government. The demonstrators threw stones at security forces, who fired bullets into the air to disperse the demonstrators.