The East/West Hararge areas of Oromia Region have been characterized by inconsistent levels of federal control over the past two years. Recent incidents of short, intense bursts of violence have revealed that local youth groups contain the capacity to challenge government control during key moments of instability, creating a dynamic that is costly for the federal government. Outside of major cities, grazing land conflicts have been transformed into prolonged violence between the Oromo and Somali ethnic groups that reside in the area. These conflicts, while not a new phenomenon, have been exacerbated by competitive ethnic rhetoric and perceived weakness of the federal government. 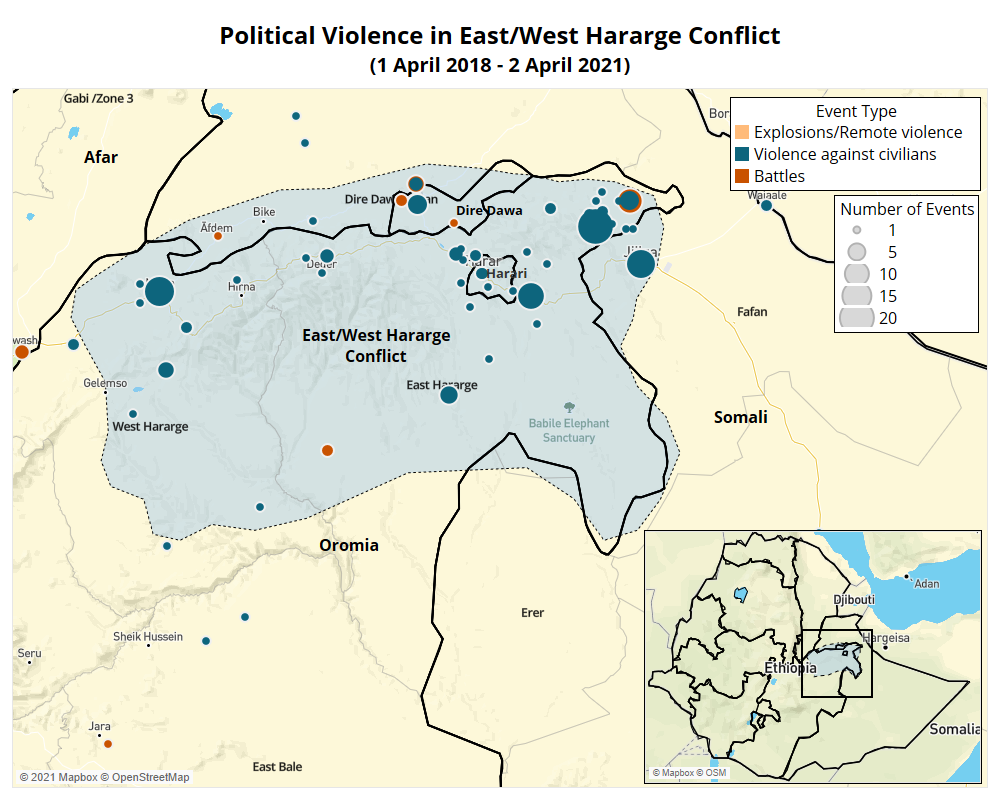 In late October 2019, rumored attempts to harm a popular Oromo activist sparked days of violent protests across East/West Hararge. A second incident occurred with the killing of Hachalu Hundessa in the summer of 2020 in Addis Ababa; waves of youth mobilized for protests and riots. During both of these incidents, rioters blocked roads, destroyed infrastructure, and attacked ethnic minorities throughout the Oromia State, including Hararge. The violent riots and peaceful protests were organized by Oromo youth organizations called Qeerroo. According to local sources in East Hararge, during both of these incidents federal police were delayed in their abilities to mobilize and respond to crisis, and in some cases local Qeerroo militias were mobilized to provide security and even make demands over resource allotment and utilization.

The Zone’s close proximity to the Somali border and long-standing border disputes have led to inter-communal violence that have been inflamed by ethno-nationalistic rhetoric. Clashes have continually resurfaced as ethno-federalism continues to undermine the authority of the central state (Ethiopia Insight, 30 December 2020). This has led to a heavily armed population and highly mobilized ethnically-exclusive militias – many espousing OLF-Shane ideology of Oromo independence. Armed clashes between ethnic militias have occurred as recently as the first week of January (OMN, 1 January 2021), despite high-profile peace conferences between the two Region’s leaders (EBC, 27 January 2021).

In the context of rising ethno-nationalistic ideals within the country, formerly tribal conflicts over resources have gotten bigger in scale and widened to potentially include members of the ethnic group even far away from the actual conflict locations. Examples of this are the ethnic clashes that occurred on the borders of East/West Hararge and Somali Region’s Fafan district, where ethnic clashes culminated in ‘pogroms’ of ethnic minorities in Jijiga city on 4 August 2018 (Hagmann, T., & Abdi, M. M., 2020) following months of clashes along the Somali/Oromia border area (Africa News, 30 January 2020).

Bringing East/West Hararge under more consistent government control will require federal engagement with the Qeerroo organizations and addressing the prevalence of armed militias operating outside of government control throughout the state.  Arrests, violence, and other repressive measures risk radicalizing moderate Oromo youth and creating flashpoints of additional violence.