West Guji zone is located on the eastern banks of Ethiopia’s Abaya lake, around 370 kilometers south of Addis Ababa. Part of the expansive Oromia regional state and bordered by several small zones that are part of Ethiopia’s Southern Nations, Nationalities and Peoples Region (SNNPR), the area has a history of border disputes and local conflicts that reflect deep issues with Ethiopia’s ethnolinguistic federalist arrangement. The area is inhabited by the Gedeo and Guji Oromo ethnic groups. 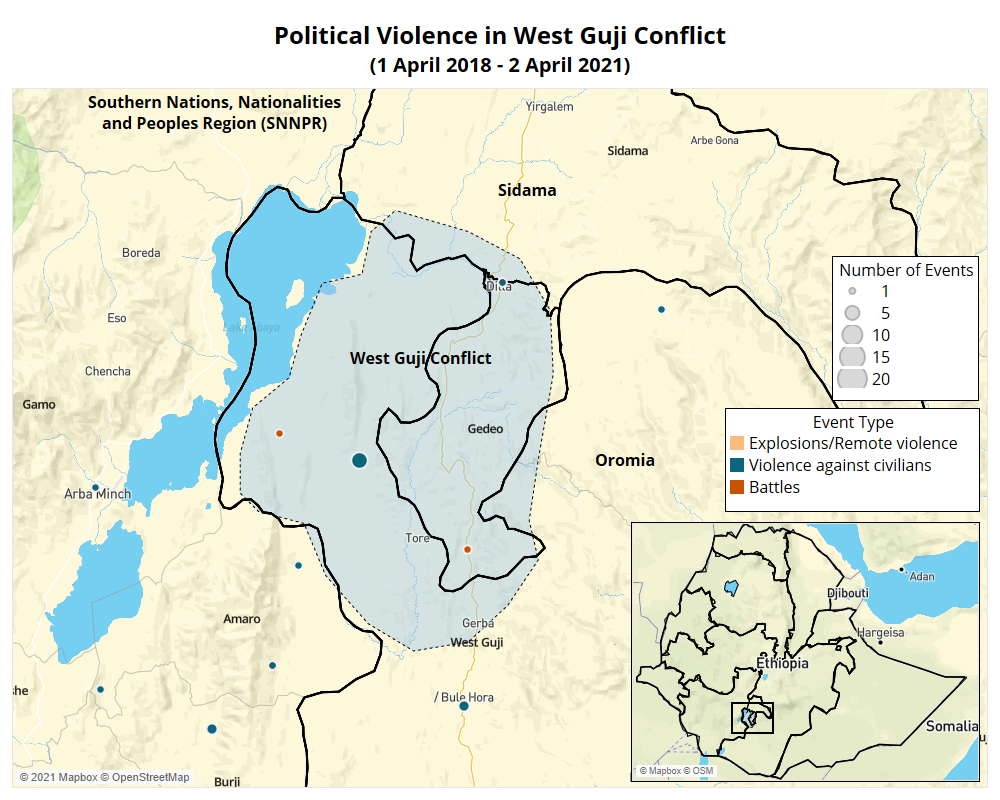 Conflict in West Guji is the result of territorial claims and counterclaims, over administrative boundaries, by competing elites who use ethnic division to fuel conflict. Before 1991, the area fell under the Sidamo Province, and conflict was limited to interpersonal disputes that were quickly solved using communal councils. This changed after the current constitution was adopted in 1994, with formal administrative divisions drawn with regional boundaries falling along ethnic lines; the Guji Oromo under the Oromia region and the Gedeo in SNNPR. Guji Oromos who then inhabited areas of SNNPR claimed to have become “minorities on their own land” (Regassa, A. D., 2012, p.18).

Referendums held in the area sparked major clashes in 1995 and 1998, with additional violent events occurring at regular intervals throughout the past 30 years.

Widespread unrest and social mobilization in Ethiopia leading up to the resignation of Prime Minister Hailemariam Desalegn limited the capacity of state security institutions and local government to address remote conflicts like those in West Guji, giving rise to renewed and intensified conflict in 2018 and 2019. Elites took advantage of a weakened institutional capacity to enforce law and order and mobilized ethnic militias in attempts to seize territory or political resources. This promotion of violence has highlighted the instability of the current political system, and further violence is expected to continue to occur as long as the state remains weak in the area.

Under the ethno-federalist system, areas like West Guji will continue to face instability, as access to land is not only essential for livelihoods, but regarded as a “commodity upon which all the constitutional rights and policy provisions are put into effect, guaranteed, and exercised” (Nigusie Angessa, 2020). This is especially evident in areas where the Guji Oromos are awarded ‘political superiority’ as a result of federalism policy, exacerbated by their economic precarity versus the relative economic stability of their competitors (Gedeo/Amaro). This imbalance of political power and economic frustration is exposed by using the existing political infrastructures of repression against minority residents, triggering widespread conflict, and displacement.

A key feature of the Guji conflict lies in the high levels of displacement by civilians caught in between warring parties. According to the IOM, nearly 1 million people were displaced as part of the conflict that erupted in the spring of 2018 (VOA, 20 July 2018).  While most of the displaced have since returned to their homes, the conflict continues to flare and violence is common. In early March of 2021, a deadly attack on communal leaders from Guji and Amaro zones who were meeting in Gelana woreda left six people dead (Amaro Woreda Communications Page, 18 March 2021).  Although widespread conflict on the scale of that experienced over the past two years is not likely to return in the face of an increasingly strong security apparatus, the election and its ‘formalized’ opportunity to influence the political scene may provide additional incentives for conflict.

Most actors recorded by ACLED in the West Guji conflict are associated with ethnic militias, belonging to Guji Oromo, the Gedao, or the Amaro communities.  Splinter factions of the Oromo Liberation Front (OLF), which often engage or are engaged by federal troops or the Oromia Special Forces, are also active in the Guji area.

OLF activity in Guji has been limited since the Guji regional commander, Elias Gambella Gollo, accepted a peace offer mediated by the traditional Oromo leaders in Guji (Borkena, 15 January 2021).  Despite their now limited presence, armed conflicts instigated by Guji Oromo militias are still often blamed on the group. The blurring of actors and overall remoteness of the West Guji area makes distinguishing OLF attacks from other ethnic-militia activity difficult, and even local news agencies often default to the OLF in a case of unknown identity.

OLF-Shane militias have recently claimed to control some territory in Guji, which could not yet be verified. 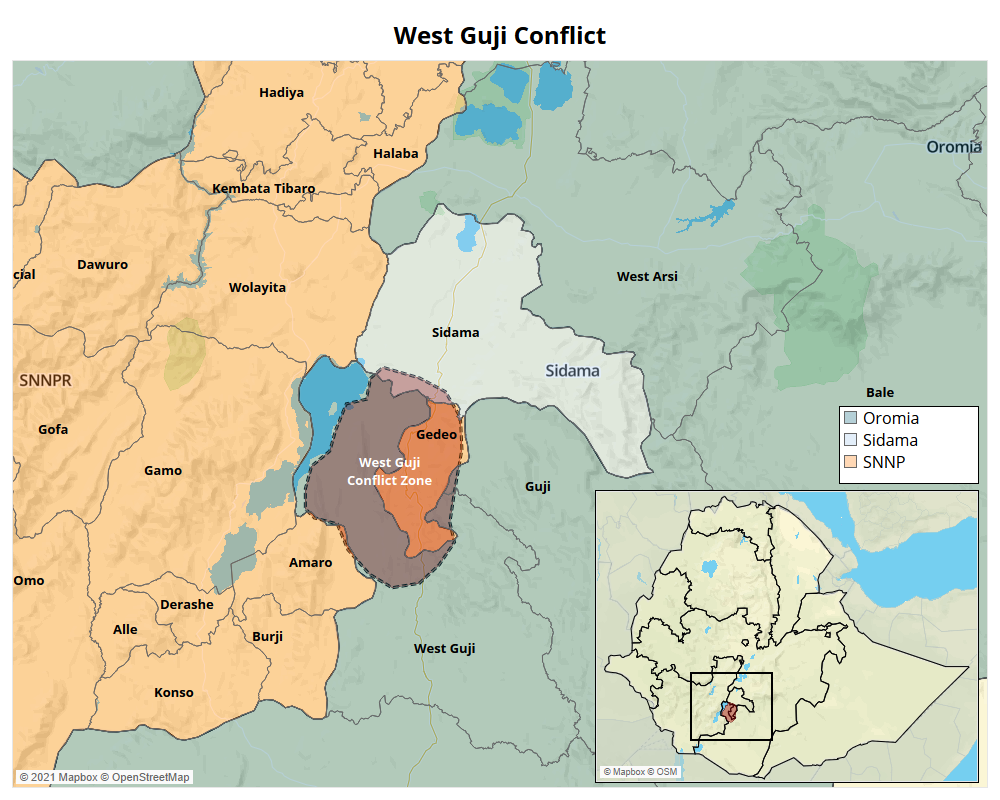