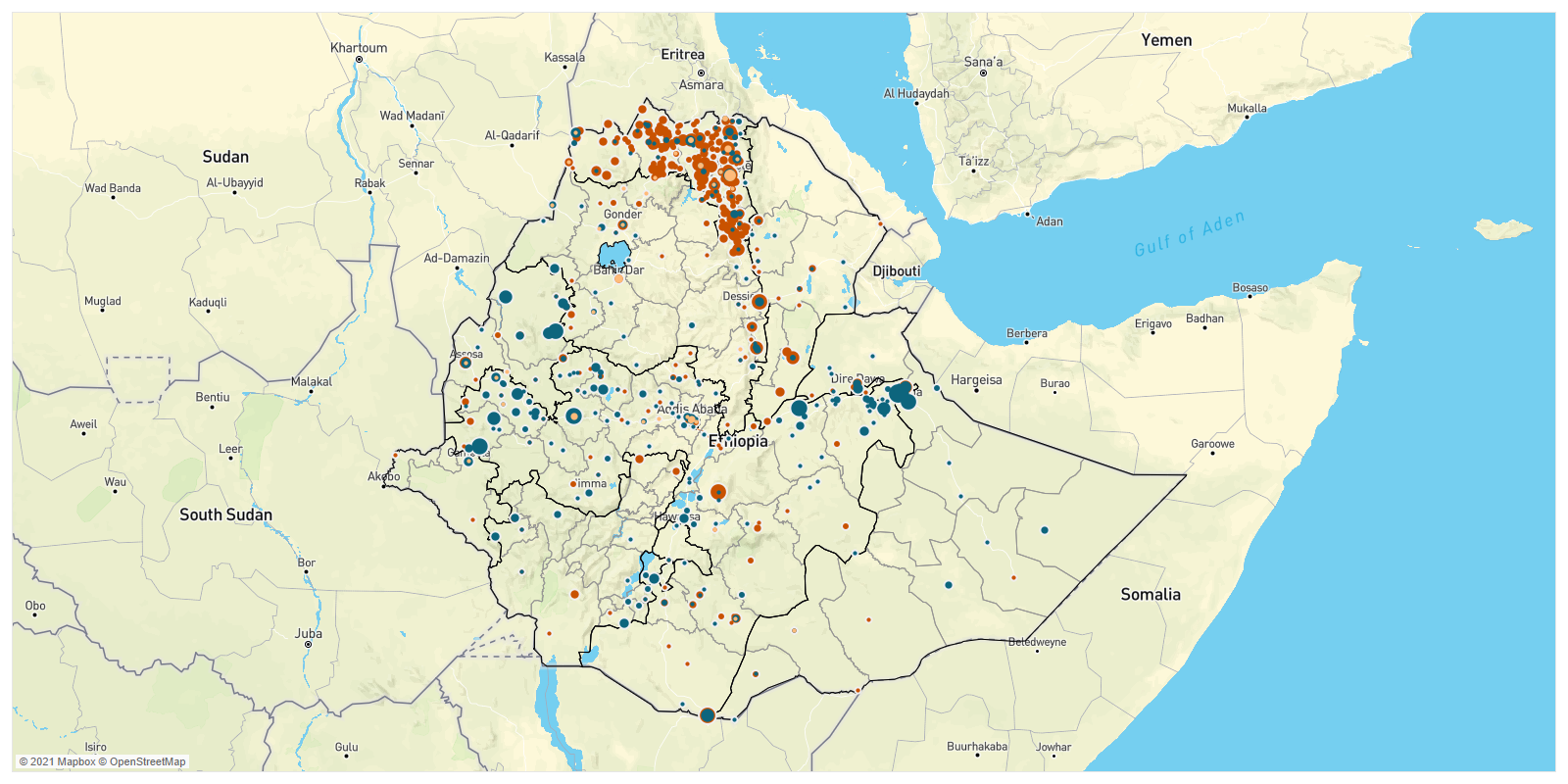 By the Numbers: Ethiopia, 17–23 July 20212Some events from this coverage period might be included in the data in subsequent weeks due to reporting delays. In particular, information about the current situation in Tigray with regards to civilian targeting is likely to come in slowly over the next couple of weeks. 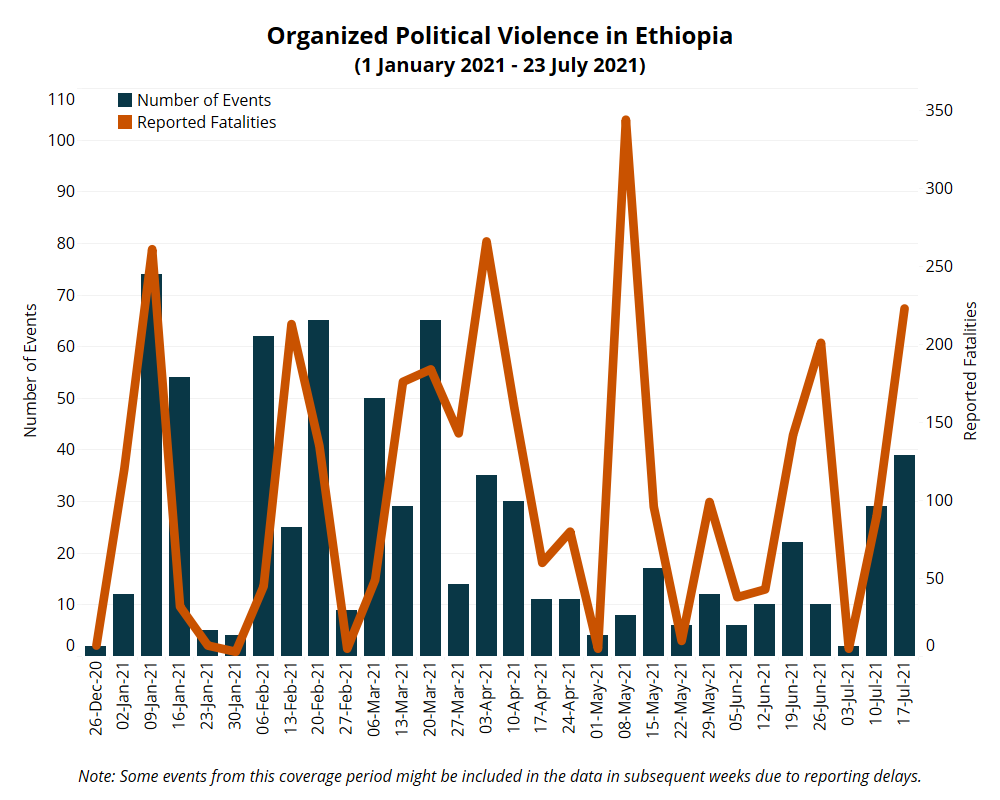 Due to the intense nature of the fighting between TPLF forces and the Afar regional forces, moving humanitarian aid through the Afar region to Tigray has become impossible. On 18 July 2021, gunmen from an unidentified group attacked a United Nations’ World Food Programme (WFP) truck convoy as it passed 115 km (70 miles) from the town of Semera in Awsi-Zone 1 in the Afar region, halting the movement of food aid into Tigray (BBC, 23 July 2021). Nevertheless, WFP continues to deliver humanitarian aid through planes from Addis Ababa to the Tigray capital, Mekele (VOA Amharic, 19 July 2021).

An unknown number of civilians have been killed in the latest bout of violence. From 17-19 July 2021, some estimates indicate that at least 20 civilians were killed by TPLF forces in Yalo woreda of Fanti Rasu-Zone 4 in the Afar region (ESAT, 19 July 2021; BBC, 23 July 2021). The Afar regional government has stated that around 70,000 people have been internally displaced from Wuba, Teru, Gudina, Yalo, and Awra woredas in Fanti Rasu-Zone 4 due to an attack by TPLF forces (VOA Amharic, 22 July 2021). Government media provided several accounts of underage TPLF soldiers who they claim were present in last week’s armed clashes in the Afar and Amhara regions (Ethiopian News Agency, 23 July 2021). At the same time, opposition politicians from the Oromo Liberation Front (OLF) have accused the Oromia regional government of forcibly conscripting underage young men to support the government effort in Afar (Addis Standard, 26 July 2021).

Eritrean refugees who were settled in different refugee camps continue to suffer because of the current Tigray conflict (Ethiopian News Agency, 23 July 2021). Around 21 July 2021, TPLF forces entered the Adi Harush Eritrean refugee camp in the North-Western Tigray zone in the Tigray region. They arrested dozens of people and confiscated mobile phones (AP, 23 July 2021). On 22 July 2021, heavy fighting erupted in the refugee camp between TPLF forces and Amhara region special forces. Six refugees were reportedly killed in the crossfire (Reuters, 22 July 2021).

Meanwhile, protests were held in areas throughout the country denouncing continued military action by the TPLF, and in support of ENDF and the Grand Ethiopian Renaissance Dam (GERD) second-round water filling. The Ethiopian government plans to fill the dam in several rounds with the first round of water filling conducted last year. The protests appeared to have been organized by the federal or regional governments. The first peaceful protest was held on 18 July 2021 by ethnic Tigrayans who live in Logiya town of Zone 1 in the Afar region, with demonstrators denouncing continued aggression by TPLF forces into the Afar region. This protest was held one day after TPLF attacked pastoralists in Yalo woreda in Fantí Rasu – Zone 4 in the Afar region (Afar Regional State Communication Affairs Office, 17 July 2021). On 21 July 2021, peaceful protests against the TPLF and in support of ENDF were held in Wolaita Sodo town of Southern Nations, Nationalities, and Peoples’ Region (SNNPR). On the next day, similar protests were held in the capital city, Addis Ababa, and in Jinka and Hadiya towns of SNNPR. Additional rallies occurred during the week in Shashemene (Oromia) and Kembata (SNNPR) towns.

On 23 July 2021, parents of students attending universities in the Tigray region held a demonstration in front of the United Nations Economic Commission for Africa’s office in Addis Ababa. The parents asked the United Nations to facilitate the return of their children who are stuck in the region after the withdrawal of the federal forces following the unilateral ceasefire.

Meanwhile, violence continued in the Metekel zone in Benshangul/Gumuz region. As Metekel zone is one of the most violent areas in the country, it has been under federal command since January 2021 (for more on the conflict see EPO’s Metekel conflict page). Last week, an unidentified armed group with reported links to a Gumuz armed group killed three individuals, including the former head of Benshangul/Gumuz region special forces in Oda Belgudul woreda, in the Assosa zone (Ethiopia Insider, 22 July 2021; ESAT, 23 July 2021). Likewise, a candidate from Baro Democratic Party who was running for Benshangul/Gumuz regional council in Mandura woreda election constituency was killed by what was reported as a “Gumuz armed group” in Gilgel Belles city in Mandura woreda in Metekel zone (ESAT, 23 July 2021). On 22 July 2021, militants from an ethnic Gumuz armed group killed one ethnic Shinasha youth in an area known as Mangi Ber in Bulen woreda of Metekel zone. As the young man was being buried, soldiers from the ENDF command post in the area shot at mourners, injuring four people (BBC Amharic, 24 July 2021; ESAT, 23 July 2021). The head of the command post in the zone denies that soldiers under his command shot at civilians (BBC Amharic, 24 July 2021).

The latest expansions by the TPLF into Afar and the northern Amhara region have sparked a new level of concern throughout Ethiopia. A number of regional governments in Ethiopia have responded by sending regional forces to the frontlines (Reuters, 16 July 2021). Both the Afar and Amhara regional governments have issued calls for youth to mobilize in defence of territory (BBC Amharic, 26 July 2021; BBC Amharic, 25 July 2021). The deputy mayor of Addis Ababa, Adanech Abebe, likewise urged youth from the city to join the military (Ethiopia Broadcast Corporation, 26 July 2021). Young men and women recruited from various locations in the Oromia region have already been sent for training (EBC, 25 July 2021).

Fighting has reached areas south of the Tigray/Amhara regional border, with the latest reports indicating that TPLF fighters were clashing with Amhara regional forces in Zarima after advancing through Addi Arkay town (Semien Gondar Zone). Residents of Addi Arkay have accused the TPLF of looting businesses (ESAT, 26 July 2021). Sources in Debark confirmed that thousands of residents from Addi Arkay, Mai Tsebri, Zarima, and Tsalemt towns were flooding south into Debark town ahead of the TPLF advance (Reuters, 26 July 2021). TPLF spokesperson Getachew Reda boasted that Tigray fighters could advance deeper into the Amhara region toward Gondar and Debre Birhan if they continued to face “ill-trained peasant militias” (Getachew K Reda,  24 July 2021).

Clashes in Afar have also resulted in territorial gains by the TPLF. Last week, armed clashes between TPLF and Afar regional forces were recorded in Abala, Yalo, Awra, Euwa, and Gulina woredas in the Afar region (see map below). According to an Afar regional spokesperson, TPLF forces now control territory in three districts along the Afar/Tigray regional border — including Awra, Euwa, and Gulina in Zone 4 of the Afar region (Reuters, 22 July 2021). As noted, at least 20 civilians were killed by TPLF forces in one incident and 70,000 people have been displaced by ongoing fighting; there has also been an unknown number of fatalities among officers from the Afar Regional Special Police (AFP, 22 July 2021; ESAT, 19 July 2021). 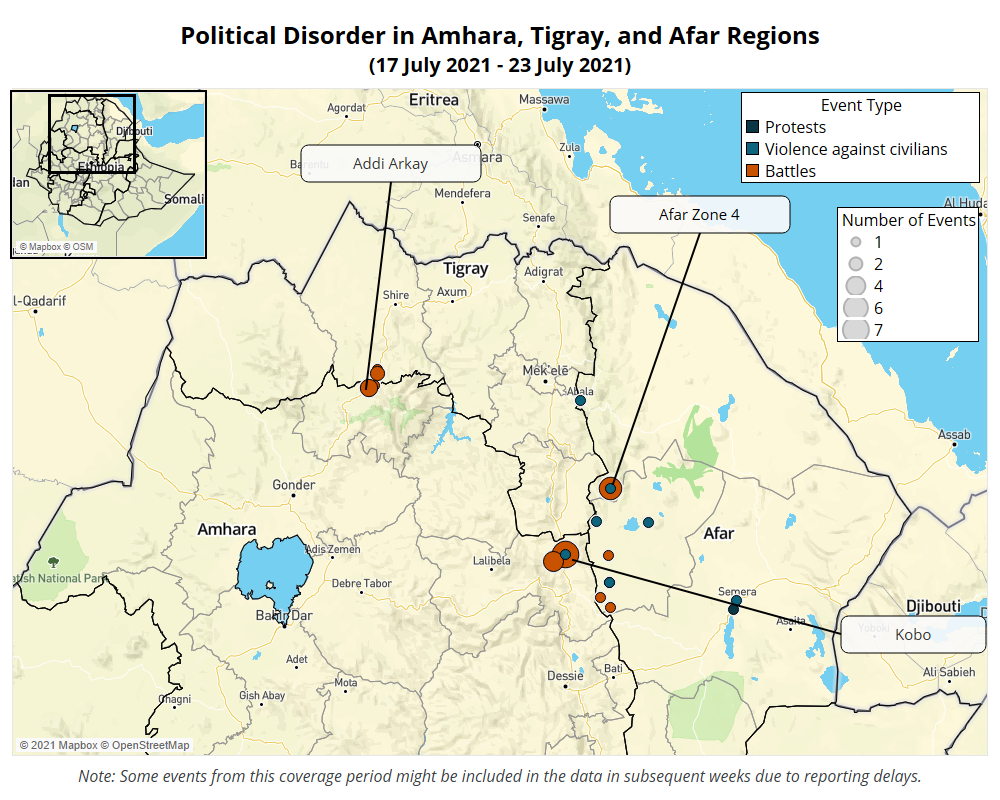 The TPLF’s ultimate goal in attacking the Afar region is to prevent the ENDF from regrouping in Semara, the capital of the region, and to control the Ethiopia/Djibouti supply line. The Ethiopia/Djibouti transport corridor is a paved road that connects the country’s capital to seaports in Djibouti for the import of fuel and food. Even though TPLF forces are still hundreds of kilometres away, the road is currently blocked by protesters from the Somali regional state denouncing unrelated incidents involving gunmen and special forces from the Afar region on Garba Issa, Undhufto, and Aydetu towns. Violence along the Afar/Somali border was sparked last April after the national election board cancelled polling stations in several towns located in the contested territory (Addis Standard, 27 July 2021; Somali Region Communication). (See the EPO’s Afar-Somali border conflict page for more information on historical disputes over contested territory along the Ethiopia/Djibouti highway.)

Advancements by the TPLF over the past week have indicated a new phase of the war, showcasing the transformation among Tigray fighters from insurgency tactics to more formalized warfare using captured heavy weapons and rapid advances along major transportation arteries. Regional special forces — which are trained and equipped to combat insurgencies in their home regions — are unlikely to be very effective against such tactics and are at a major disadvantage. The extent of damage inflicted by the TPLF on the ENDF, which pushed TPLF forces from all major towns and cities in the Tigray region in less than a month of formalized warfare in November of 2020, is unclear. The federal forces have yet to launch a major operation against the militants since leaving the Tigray region in the last days of June. Whether the army has been soundly defeated — as claimed by the TPLF — or if it has simply decided to withdraw based on humanitarian concerns as the federal government claims are unclear. The head of ENDF stated that federal forces are waiting for orders from the federal government in respect of the unilateral ceasefire declared by the federal government (Ethiopia Broadcasting Corporation, 20 July 2021). Also unclear is the status of the Eritrean forces which also withdrew from the Tigray region at the end of last month.

Sanctions imposed by the United States on the federal government, Amhara regional authorities, and TPLF leaders appear to have little or no effect in pushing the warring parties into a peace agreement (Al Jazeera, 24 May 2021). The government-declared ceasefire was called a “sick joke” by the TPLF, which has vowed to continue fighting until it has assured Tigrayan’s security by defeating Amhara and Eritrean forces (AP, 29 June 2021).  Ethiopia’s federal government has likewise taken a hard-line position that lessens the chances for peace discussions. In addition to labelling the TPLF a terrorist organization and levelling charges against TPLF leaders, the government has threatened media organizations with the revocation of reporting privileges if they use terms that “advance the terrorist group’s agency,” including by “legitimizing a terrorist group as a ‘Defense Force’” (Allafrica, 23 July 2021; VOA, 23 July 2021).

The international community has said little about the TPLF’s most recent expansions into territory outside of the Tigray region. Critically, continued fighting has blocked the transport of humanitarian supplies and only 1% of the needed food has reached the Tigray region (BBC, 24 July 2021).

On 21 July 2021, the Ethiopian Citizens for Social Justice (EZEMA) party submitted an election-related dispute claim to the federal supreme court (EZEMA, 22 July 2021). EZEMA requested reruns of the elections in 28 electoral constituencies located in SNNPR. Although EZEMA originally submitted dispute claims concerning 68 election constituencies to the National Electoral Board of Ethiopia (NEBE), the party has decided to appeal to the supreme court due to perceived failures by NEBE to investigate its claims before rendering a decision. NEBE has announced the election will be rerun in only one of 68 concerned electoral constituencies (EZEMA, 22 July 2021). The party claims include intimidation, election-related violence, non-inclusion of registered candidates on the ballot papers, and vote counting without the presence of opposition party representatives.

So far, EZEMA is the only party that has submitted a post-election dispute concerning the outcome of the election to court. Other opposition parties have not submitted disputes as they were either sidelined early into the election, chose to withdraw completely, or, in the case of the National Movement of the Amhara (NaMA), are preoccupied with fighting on the northern front. According to the electoral rules, any complaints related to voting, counting and results must be submitted to the supreme court within 10 days of the final NEBE’s decision of the submitted claims (The Ethiopian Electoral, Political Parties Registration and Election’s Code of Conduct Proclamation No. 1162/2019, Article 155). The supreme court is expected to make a decision within a month as per the electoral regulations.