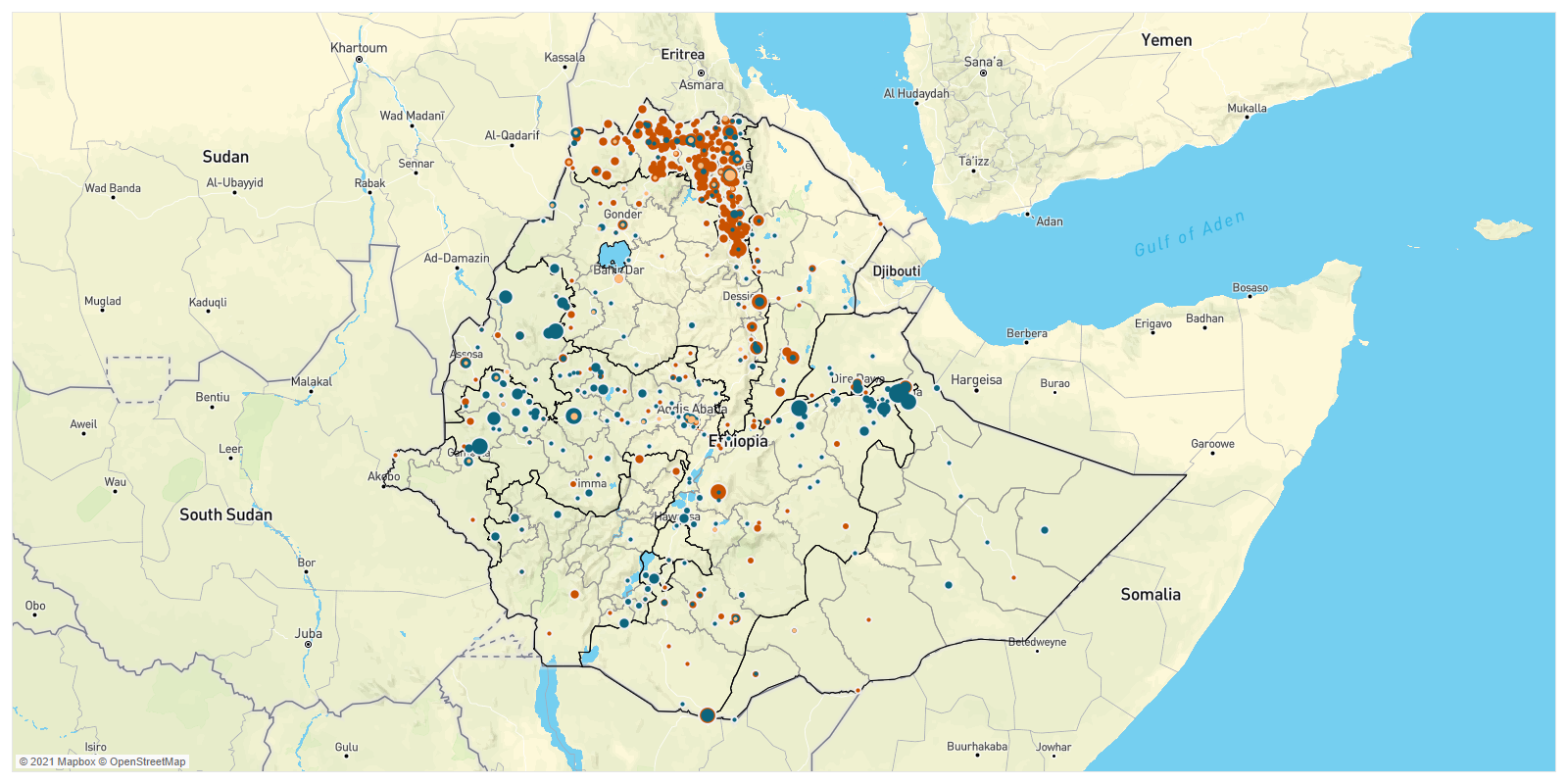 By the Numbers: Ethiopia, 2 April 20181Figures reflect violent events reported since Prime Minister Abiy Ahmed came to power on 2 April 2018.-30 July 20212ACLED’s real-time data updates are paused through the end of August 2021. Data for the period of 31 July to 3 September will be released on 6 September, at which point real-time data publication will resume. All ACLED data are available for download via the data export tool and curated data files.

Last week, clashes between the Tigray People’s Liberation Front (TPLF) and the Ethiopian National Defense Force (ENDF), accompanied by regional special forces and militias, decreased in the Afar region while continuing in the Amhara region and Western Tigray zone in the Tigray region.

In the Amhara region, farmers and gun-toting youth not operating under the command of Amhara regional special forces and Amhara militias have begun attacking TPLF forces as they move through villages and towns. Such attacks increased after the Amhara regional president called on everyone to “struggle” against the TPLF forces that enter their community, incentivizing them by stating that any weapons taken during clashes could be kept by private citizens (Amhara Media Corporation, 16 August 2021; Addis Standard, 18 August 2021).

Last week, on 15 and 16 August 2021, ENDF clashed with Qemant Committee militias along the Welkait front in the Amhara region (ESAT, 17 August 2021). The Qemant Committee demands greater autonomy for the Qemant ethnic group in the Amhara Region. In April 2021, Qemant affiliated militias clashed with Amhara regional special forces in the North Gondar zone. The Amhara regional government has accused this group of having links with TPLF (for more details on the conflict, see EPO’s Qemant Conflict page).

Meanwhile, the Oromo Liberation Front (OLF)-Shane clashed last week with the Oromia regional special forces and Oromia militias in the Oromia region, gaining control of some areas. Roads between Gimbi and Najo, Gimbi and Dembi Dollo, and Gidami and Asosa have reportedly been closed due to the ongoing clashes (BBC Amharic, 14 August 2021). Details will be discussed further below.

As reported on 14 August 2021, the ENDF, along with associated federal police and Southern Nations, Nationalities and Peoples Region (SNNPR), Sidama, and Gambela regional special forces, clashed with an unidentified armed group in Guba woreda in Metekel in Benshangul/Gumuz, reportedly killing more than 170 members of the group (Ethiopian Broadcasting Corporation, 14 August 2021; Amhara Media Corporation, 14 August 2021). The armed group, which came from Sudan, intended to create unrest in Guba woreda, where the Grand Ethiopian Renaissance Dam is being built. 16 of those killed are believed to have been members of TPLF. Furthermore, 32 people with suspected links with TPLF were arrested in Kurmuk woreda, Asosa zone while trying to enter the region from Sudan (Ethiopian Broadcasting Corporation, 17 August 2021).

Lastly, on 15 August 2021, unidentified militants reportedly attacked a restaurant in Segen town of Konso zone in SNNPR. Three people were killed and five others were injured due to the attack (Ethiopia Insider, 16 August 2021).

Weekly Focus: OLF-Shane Activity after Allying with the TPLF

The Oromo Liberation Army — also called OLF-Shane — split from the Oromo Liberation Front (OLF) in 2018. It began engaging in violent conflict with federal and Oromia regional state forces throughout southern and western Oromia in November 2019 (see map below). Recently, an activity involving OLF-Shane has increased significantly since the rebel group’s leader, Jaal Marroo (Kumsa Dirriba), announced a military alliance with the TPLF on 11 August 2021 (VOA, 11 August 2021). Clashes have intensified in Southern Oromia in areas near Negele town, with OLF-Shane forces taking control of some locations in Gumi Eldalo woreda, located nearby. Clashes also intensified in the West Wollega zone last week, with militants reportedly briefly taking control of roads and blocking traffic (BBC Amharic, 14 August 2021). The group has also become emboldened in the Horo Guduru Wollega zone, claiming to have taken control of the Finchaa Sugar factory near Abay Chomen after battling federal and Oromia regional forces in the area (OLA Communique, 22 August 2021). 22 OLF-Shane militants were arrested in Hawassa (Sidama region) last week, an area where the group has not previously been active (VOA Amharic, 17 August 2021; Ethiopian Broadcasting Corporation, 22 August 2021). Hawassa is a gateway city along the route connecting the Oromia zones of West Arsi and West Guji/Guji via the Addis Ababa-Moyale highway. 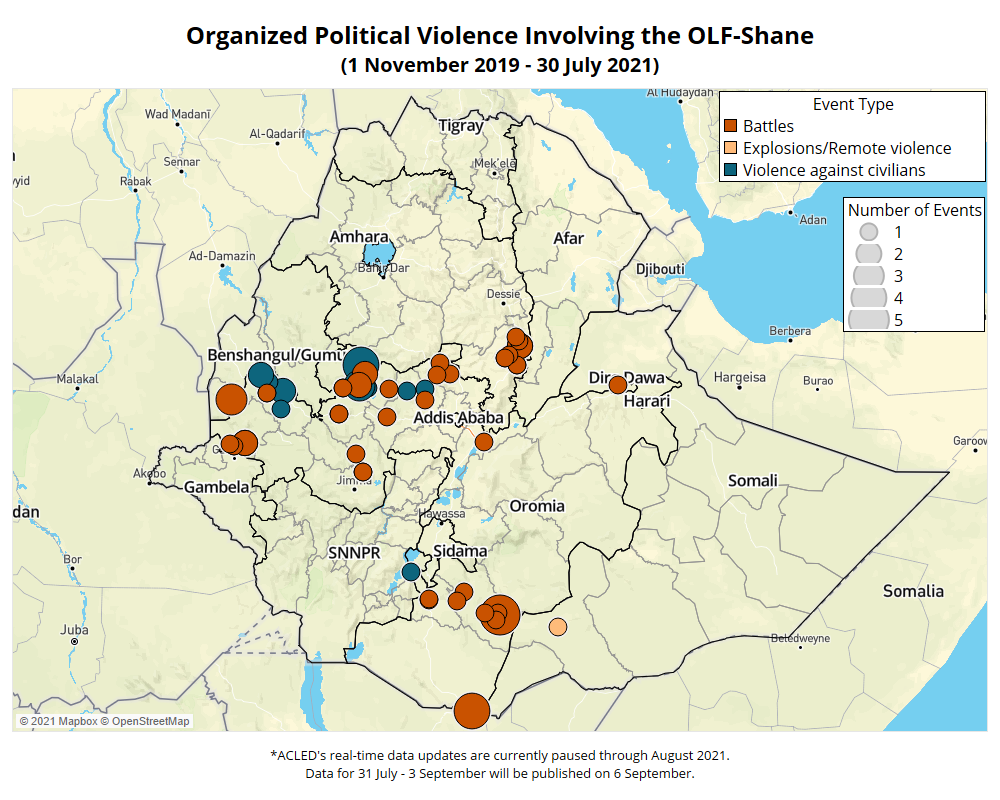 The territorial gains made by OLF-Shane mark a significant break from the group’s past habit of attacking and then retreating to deeply forested areas of Oromia. It appears that OLF-Shane has become emboldened in their desire to emulate the battle tactics of their new ally, the TPLF, imitating their habit of holding territory after battles. Whether or not the OLF-Shane forces can take and hold territory — such as Negele town in Guji zone — will be tested in the coming weeks.

The fact that OLF-Shane and the TPLF do not operate in regions that share a border makes the benefits of the newly formed alliance unclear. For the TPLF to share any sort of military equipment or training with the lesser-equipped OLF-Shane insurgents would require passing through government-controlled territory. The detrimental effects of the alliance, however, are easier to analyze given historical differences between the groups. Selling the TPLF as a beneficial ally in the fight against the central government to those in Oromia who suffered marginalization and intense security crackdowns during TPLF rule will be a difficult task.

The rebel alliance has also been met with renewed activity on the government’s side. In addition to the 22 militants arrested in Hawassa, the government has also carried out mass arrests of individuals and closed businesses across the country with suspected links to OLF-Shane or the TPLF. As many as 117 businesses were closed in the capital, Addis Ababa, last week (VOA Amharic, 19 August 2021). 93 individuals were arrested in Gambella (Ethiopian Broadcasting Corporation, 13 August 2021). Hundreds of people were reportedly arrested in Benshangul/Gumuz region last week with suspected links to anti-government groups. Arrests were likewise carried out in the Somali region (DW Amharic, 19 August 2021). Such mass arrest campaigns, as well as crackdowns on journalists, are likely to continue.

The Ethiopian government has also announced that it intends to build a local social media rival to Facebook, Twitter, and Whatsapp (Reuters, 23 August 2021). Government authorities have long accused social media companies of allowing the spread of misinformation and anti-government messaging.

Meanwhile, the government has continued calls for anyone fit and able to join the military (New York Times, 22 August 2021). Recruitment drives across the country have seen thousands of youth mobilized to fight. Their preparedness to face the TPLF will be dependent on the quality of the training that the ENDF and regional special forces and militias can provide. As insurgent activity increases throughout Oromia, Amhara, Tigray, and Benshangul/Gumuz regions, the central government’s hold over the security situation will continue to be tested.